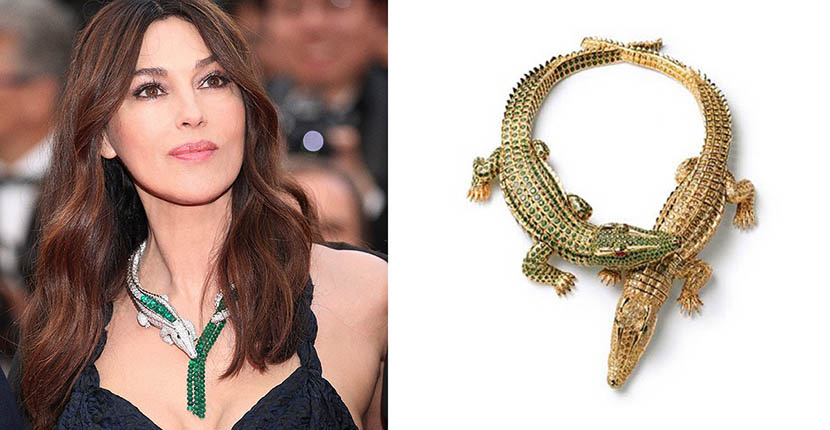 Monica Bellucci wearing the Maria Felix crocodile necklace at the 2019 Cannes Film Festival and the original 1975 necklace she wore in 2006. Photo Getty and courtesy

Monica Bellucci made a style call back in Cannes. The Cartier crocodile necklace she wore to the May 18, 2019 screening of Les Plus Belles Annees D’Une Vie (The Best Years of a Life) was inspired by María Félix’s crocodile necklace that she had donned in 2006 for the Film Festival. The vintage piece is one of Cartier’s most iconoclastic designs.

Cartier is known throughout the world for the panthers that have been prowling around the design studio for over 100-years, but they have also made lots of other animals. The designers have bred sleek tigers. A whole flock of birds of paradise flew in the mid-20th century. Bugs, snakes and turtles have all been made by the French firm. But as far as I know there was only one crocodile necklace in Cartier’s history. 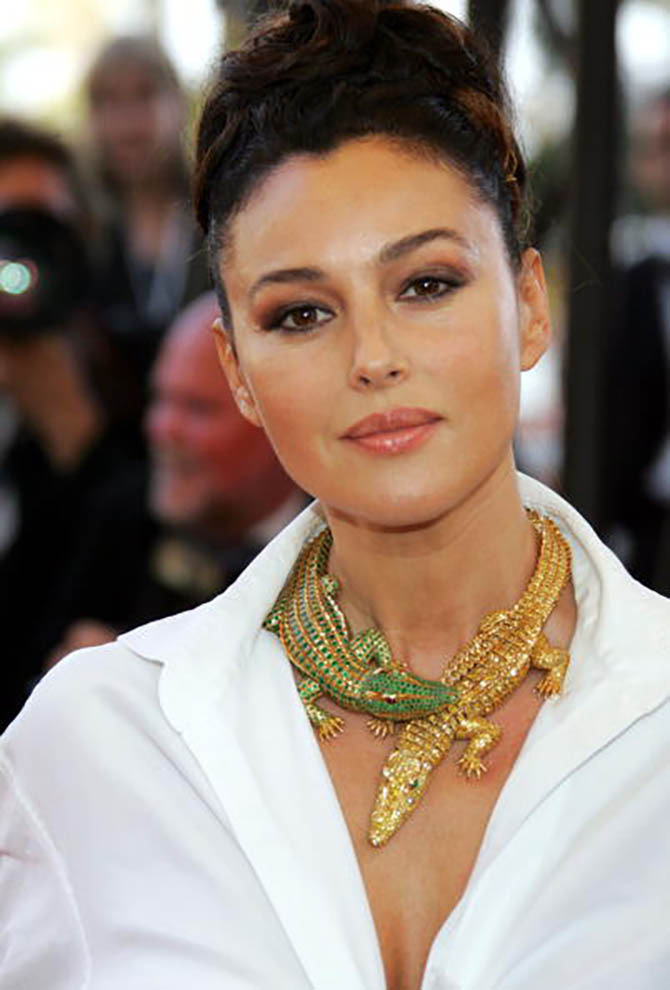 The legendary story about the jewel is that it was commissioned by María Félix around 1975 when she waltzed into Cartier in Paris with live little baby crocodiles as a source of inspiration for the designers. While I have always felt this story seemed a bit more like myth than fact, the firm swears it’s all true. The remarkable realism of the scutes on the crocodile’s skin in the necklace make me believe it.

Beyond the scutes, Cartier took creative license lighting up the yellow gold crocs with gems. One is covered in 60.02 carats of fancy intense yellow diamonds. Navette-shaped emerald cabochons form the eyes. The other has 66.86-carats of emeralds and ruby cabochon eyes. Both the crocodiles are entirely articulated with interior armatures. They can be separated and worn individually as brooches. 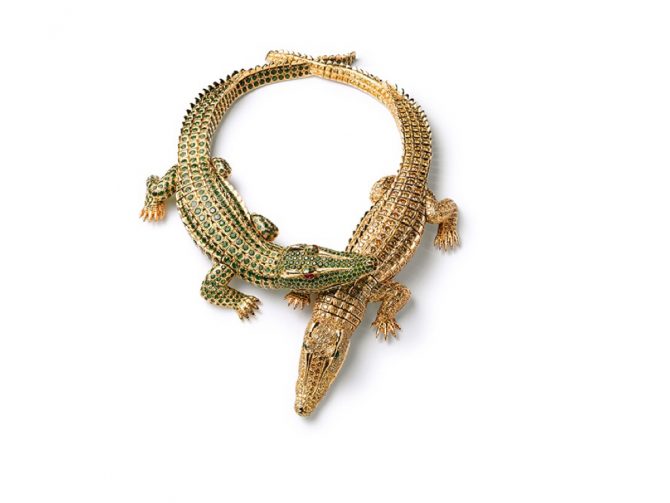 Maria Felix’s gold crocodile necklace made by Cartier in 1975 is set with emeralds and yellow diamonds. Photo

From the moment the crocodile necklace was born, it was famous because of the dramatic ways María Félix flaunted it. The jewel has remained very high profile as it is one of the treasures routinely featured in Cartier books and exhibitions. It is the cover piece of The Impossible Collection of Jewelry.

The Crocs only red carpet appearance was for the Cannes Film Festival in 2006 when Monica Bellucci tossed it on with a white button-down shirt and skirt and created an instantly iconic look. She also showed how very fierce and timeless the jewel was.

As a tribute to the necklace, Cartier recently created the María Félix suite of crocodile jewels. The same artisan-sculptor behind the original piece was involved in the making of the new set featuring a necklace, bracelet, earrings and a ring. Each of the items has the same realistic quality as the original with sculptural scutes highlighting the skin. Extraordinary Colombian emeralds are set along the crocodiles back. The way Monica Bellucci breezily wore the new Cartier crocodile in Cannes showed the masterwork has edge and style just like its predecessor.

The Mystery of María Félix’s Jewels

Why Is Sheikh Al Thani Selling His Jewelry?