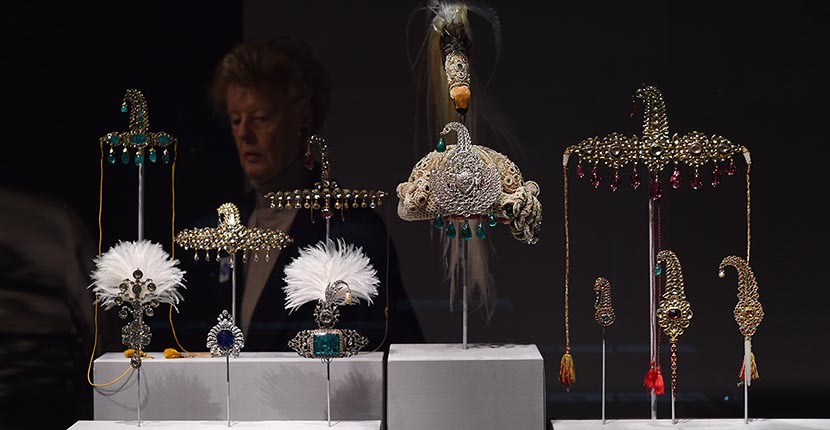 One case of the "Treasures from India, Jewels from The Al-Thani Collection" exhibit at the Metropolitan Museum of Art in New York in 2014. Photo Getty

And why is he selling his jewelry

The jewelry world was shook when Christie’s announced it would be presenting a special sale titled Maharajas & Mughal Magnificence on June 19, 2019. One quick glance at the highlights in the press release were immediately recognizable as treasures from The Al Thani Collection. Everyone I have spoken with since the news broke a couple of weeks ago was surprised about it. They didn’t see the sale coming because of the nature and prestigious, albeit short, history of the collection.

The Al Thani Collection has been reported by some news outlets as belonging to the Qatari royal family, but that isn’t quite accurate. It was truly assembled by just one young man, Sheikh Hamad Bin Abdullah Al Thani. The Qatari national is the CEO of QIPCO (Qatar Investment & Projects Development Holding Company) and a first cousin of the emir of the country.

He became interested in Indian jewelry when he was 27-years old in 2009 and visited the exhibit Maharaja: The Splendour of India’s Royal Courts at the Victoria & Albert Museum in London. He had never been to India at the time but was instantly enchanted with the style and wanted to assemble a collection of his own. “It is remarkable what you can do when you are a collector with his energy, passion, knowledge level and resources,” Amin Jaffer, the V&A curator who invited Sheik Hamad to the exhibit and later became his advisor of acquisitions explained to Forbes editor Richard Nalley several years ago. 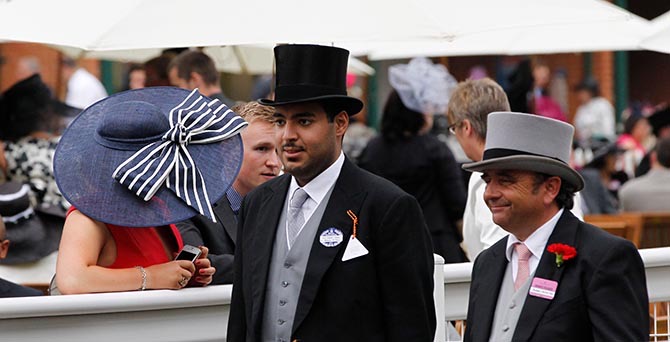 Since The Al Thani Collection made its public debut in 2013 with the first exceptional book Beyond Extravagance: A Royal Collection of Gems and Jewels, it has not only been acknowledged as one of the most impressive collections ever assembled it has also become one of the only jewelry collections in the world that was made available to academic institutions for study and display. The Al Thani Collection has been the subject of 10 books in the last four years. Most of the publications were catalogues to accompany the 9 exhibits at world class museums including The Metropolitan Museum of Art, The Victoria & Albert Museum, the Grand Palais in Paris, Dodge’s Palace in Venice and The Palace Museum in Beijing. As recently as this February, The Al Thani Collection was on display at the Legion of Honor Museum in San Francisco.

Each exhibit was slightly different, highlighting unique elements of the collection and angles showing the influence and excellence of Indian jewelry design. The exhibits ranged in size from just 60 pieces at the MET in 2014 to 560 jewels and objects shown at The Palace Museum in Beijing in 2018. There were pieces with royal provenance made in the Mughal style and dating from the seventeenth century. There were also extraordinary jewels from esteemed French houses inspired by Indian design. The looks ranged from Cartier Art Deco jewels right up to contemporary pieces by the celebrated American based in Paris, Joel Arthur Rosenthal, otherwise known as JAR. 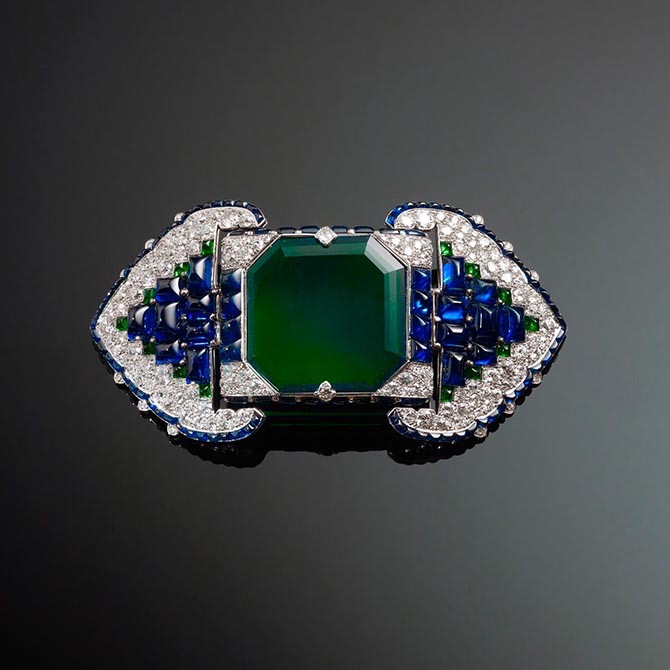 While the collection became famous through all the exhibits, the Sheik kept a very low profile. He has rarely been photographed. On a couple of occasions, he was spotted by the cameras enjoying horse races in England. The Queen allowed his company QIPCO to become the first commercial sponsor of Royal Ascot. The Sheik and his family have hundreds of horses.

In 2015, Al Thani agreed to an interview with James Reginato for Vanity Fair. The focus of the story titled “Sheik Shack” was Dudley House, his 44,000-square foot historic property in London that the Sheik had restored to beyond its original glory. The article touches on the jewelry that was on display at the MET. The museum curator Navima Najat Haidar explained that the Sheik “has joined the ranks of the great collectors. He’s bought top, top things.” 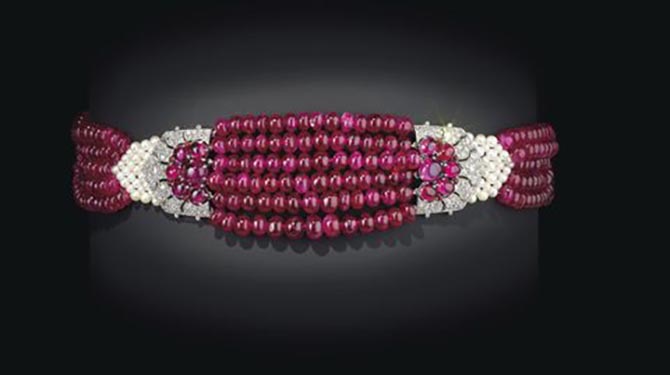 The Cartier Patalia Ruby Choker from The Al Thani Collection being sold at Christie’s in June. Photo courtesy

In the Vanity Fair article, it said The Al Thani Collection was around 400 jewels and objects. Flash forward to now, just four years later, the collection was reported in the Christie’s release to be 6,000 items. Four hundred are being sold. Among the jewels going on the auction block are many of the marquee pieces that were featured in the various exhibitions.

Of course, this all begs the question of why is the Sheik selling so many jewels? To be sure, the rumor mill has churned. The conclusion some people leapt to was that money was needed. I think it’s pretty safe to say the Al Thani fortune is in superior shape, but the next location and plans for the future of the collection does require some funding. 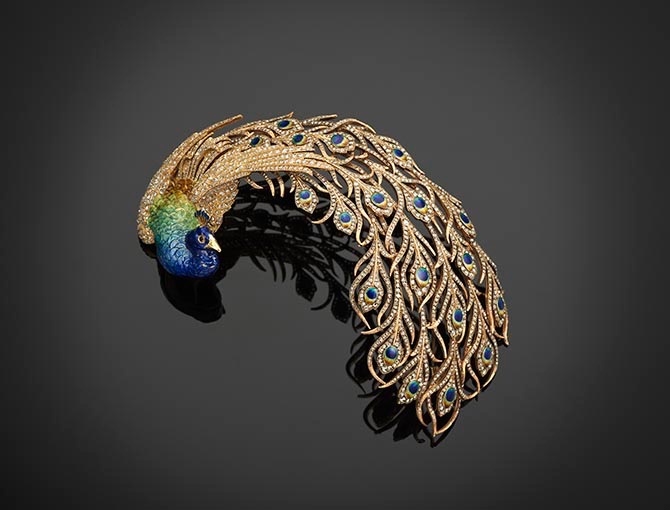 Mellerio Bird Aigrette made around 1905 from The Al Thani Collection being sold at Christie’s in June. Photo courtesy

It was announced in April of 2019 that the Al Thani Collection had found a permanent home in Paris at the Hôtel de la Marine just off the Place de la Concorde. The historic building was commissioned by Louis XV in the 18th century and it needs some work. I suspect it needs a lot of work to be up to Sheik Hamad’s standards. As for the rest of the money, according to Christie’s “In addition to new acquisitions, sale proceeds will support ongoing initiatives of The Al Thani Collection Foundation which extend from exhibitions, publications and lectures to sponsorships of projects at museums around the world.” In other words, even with all Sheikh Hamad Bin Abdullah Al Thani has achieved and contributed to jewelry history with his collection over the course of the last 10-years, it is quite possible he has only just begun.

A Look At Jayne Wrightsman’s Jewelry