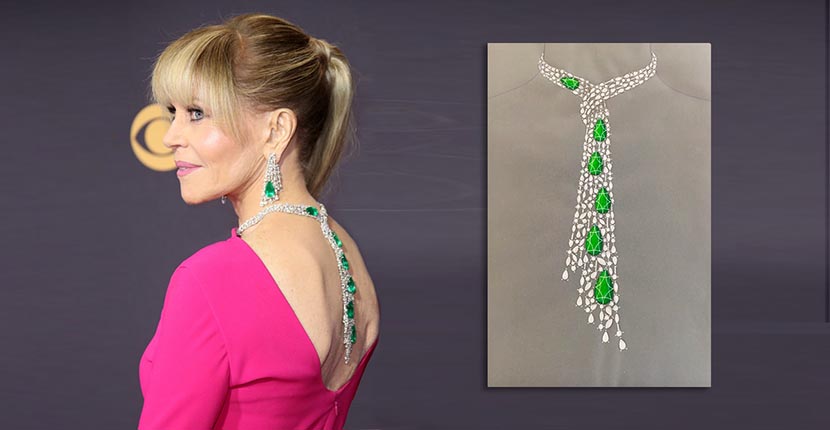 Jane Fonda wearing the Gismondi 1754 emerald, diamond and platinum necklace and earrings at the 2017 Emmys and drawing of the necklace Photo Dan MacMedan/Getty Images and Gismondi 1754

Jane Fonda didn’t make every Best Dressed List for the Emmy Awards because she is a Hollywood legend. She didn’t land on those lists because she looks sensational for 79. She got the kudos because she straight up deserved them.

The star’s longtime stylist Tanya Gill always makes Jane’s rare red-carpet appearances memorable. Every once in a while, that includes a real jewelry masterpiece. When I met Tanya, I told her the time she put Fonda in the big choker at the 2015 Cannes Film Festival was a jewelry moment I will never forget. Well, file the 2017 Emmy Awards into another one that goes down in the history books. 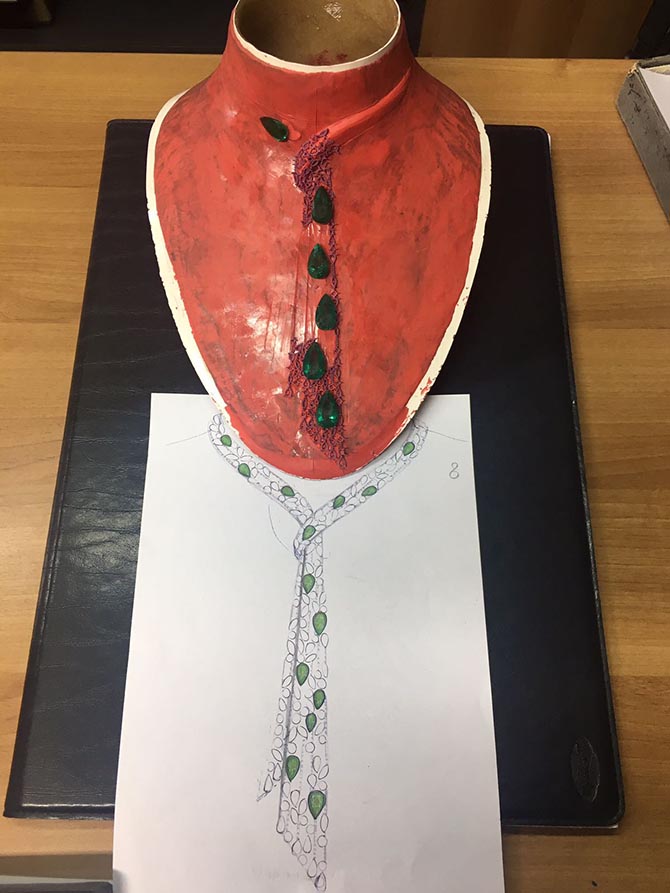 Work in progress: The design and model of the Rugiada emerald, diamond and platinum necklace by Gismondi 1754 Photo courtesy

Tanya sourced the Rugiada suite of emerald, diamond and platinum jewelry from the Italian firm Gismondi 1754. Conceived by chief designer and CEO, Massimo Gismondi, the matching necklace, earrings and ring took over 600 hours and 10 artisans to create. In total, there are over 100-carats of diamonds and 100-carats of emeralds. 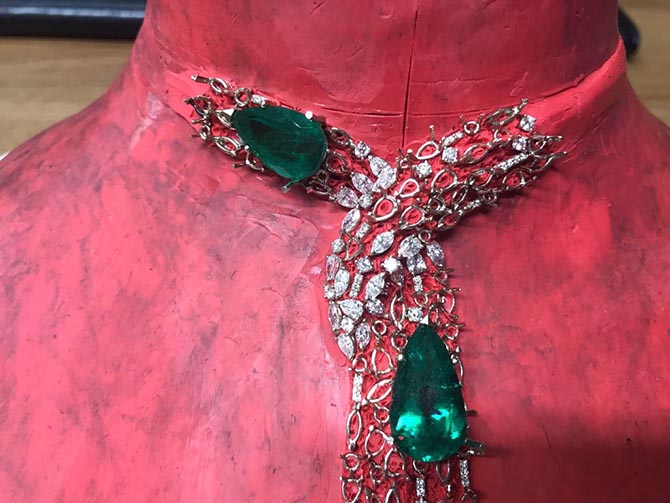 Detail of the Rugiada emerald, diamond and platinum necklace by Gismondi 1754 on clay in production Photo courtesy

As soon as the jewels were finished at Gismondi 1754’s atelier in Genoa, which was just days before the Emmys, they were rushed for final approval to Massimo who was in Portofino. Then the jewels were taken back to the atelier in Genoa, for a final quality check and insurance clearances to fly to the United States. Next, they were hand carried to a guard in Rome who traveled 20-hours to the fitting for Jane Fonda. 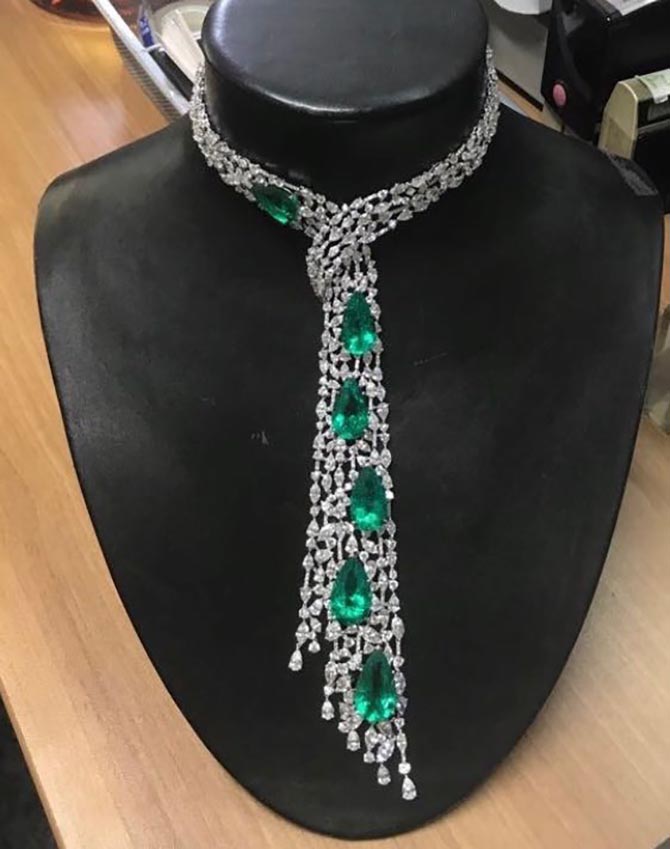 The Rugiada emerald, diamond and platinum necklace by Gismondi 1754 in the Genoa atelier Photo courtesy

Tanya gave the necklace a brilliant final styling flourish when she turned the piece around so it would drape down the open-back of the fuchsia Brandon Maxwell dress Ms. Fonda was wearing. Massimo said the overall look “exceeded his expectations.” I think it’s fair to say most people would agree. The 79-year old Jane Fonda was the surprise style star of the red carpet. 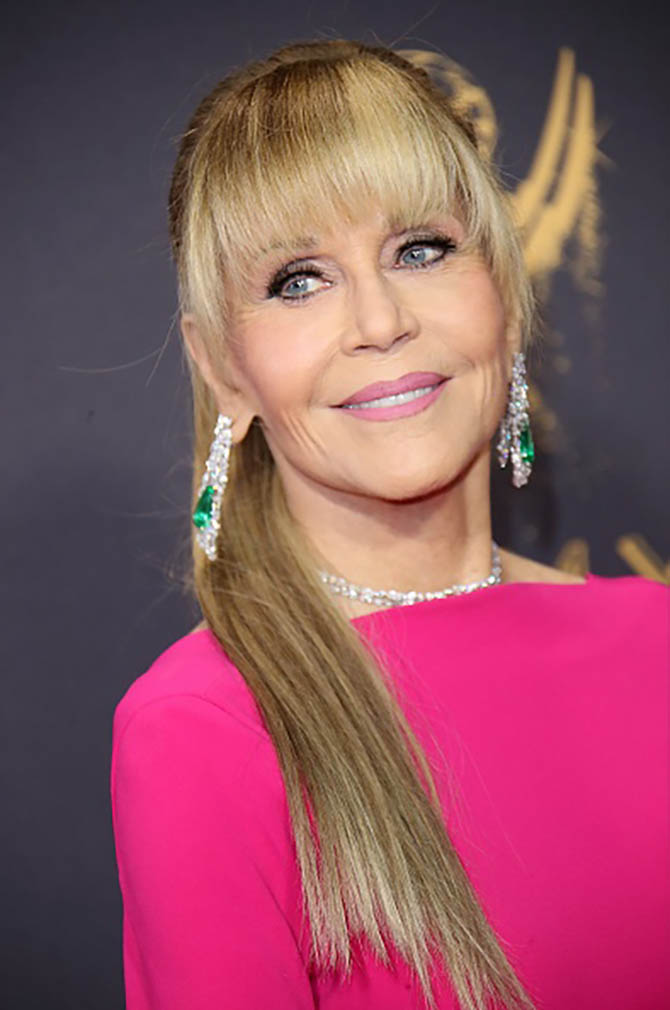 The Best Jewelry at the 2017 Emmys