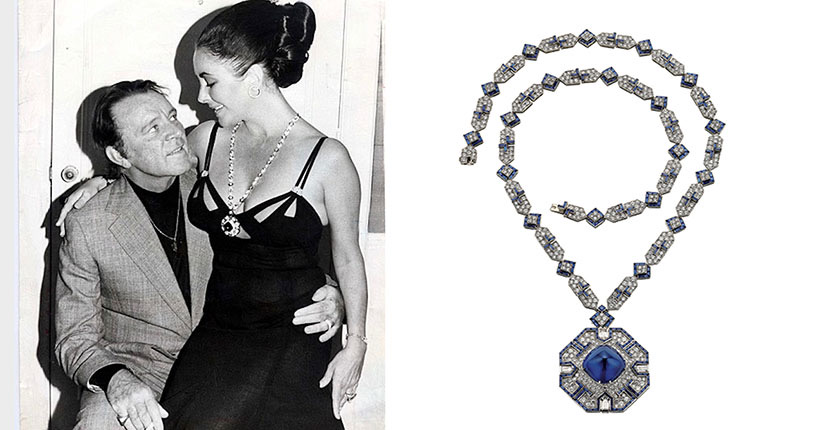 Richard Burton with Elizabeth Taylor who is wearing her Bulgari sapphire sautoir at his 50th birthday party in 1975. Photo Getty and courtesy

The 1970s sautoir is part of the Studio 54: Night Magic exhibition

September 16, 2020—For jewelry geeks like me, there are some pieces you make a pilgrimage for no matter how many times you have seen them. Elizabeth Taylor’s Bulgari sapphire and diamond sautoir is one of them.

The day the Brooklyn Museum reopened, after being closed during the coronavirus, I was there bright and early to get a good look at the jewel on display in the Studio 54: Night Magic exhibition.

Why is the masterpiece in the delightful show? Well, curator Matthew Yokobosky cut a wide swath across the dance floor bringing as much (yes) magic as possible to the exhibit. It includes videos of parties at Studio 54, clothes that were worn, photos of the revelers and a soundtrack with a four-on-the-floor beat that has you doing the shuffle through all the rooms.

Among the memories of the disco days is Elizabeth Taylor’s treasure. And the jewel fits right in with the party people.

The star received it as a 40th birthday present from her husband Richard Burton on February 27, 1972 in Budapest, Hungry. The couple was in the then-communist country because Burton was on location filming Bluebeard. 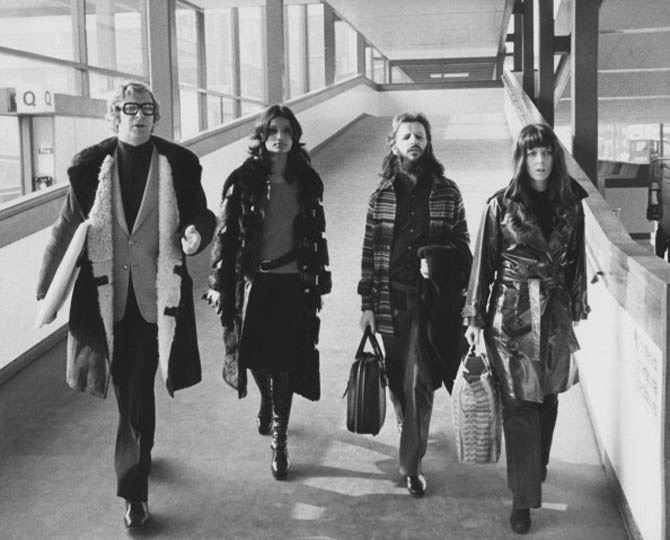 Actor Michael Caine, his future wife Shakira Baksh, former Beatle Ringo Starr and his wife Maureen at Heathrow Airport in 1972. The four are departing for Budapest, where they will be guests at 40th birthday celebrations for actress Elizabeth Taylor. Photo Getty

To celebrate Taylor’s big four-oh, the Burtons invited lots of their famous friends including Grace Kelly, Michael Caine, Ringo Starr and Raquel Welch to celebrate for several nights at the Hotel Intercontinental. One evening Taylor wore the Bulgari jewel. (And, yes, for those of you keeping score it was not the only jewel Taylor received from Burton for her 40th. He also gave her the Taj Mahal Diamond necklace, but that is another story for another day.) 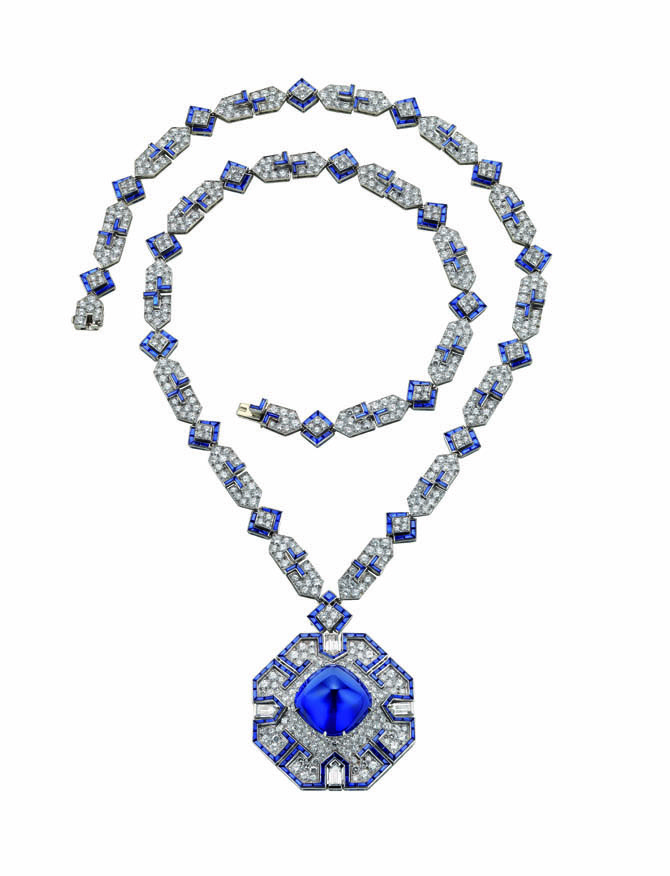 When Taylor debuted the piece in Budapest, she wore the long chain doubled up around her neck with a sequined caftan and her David Webb platinum and diamond hoop earrings. 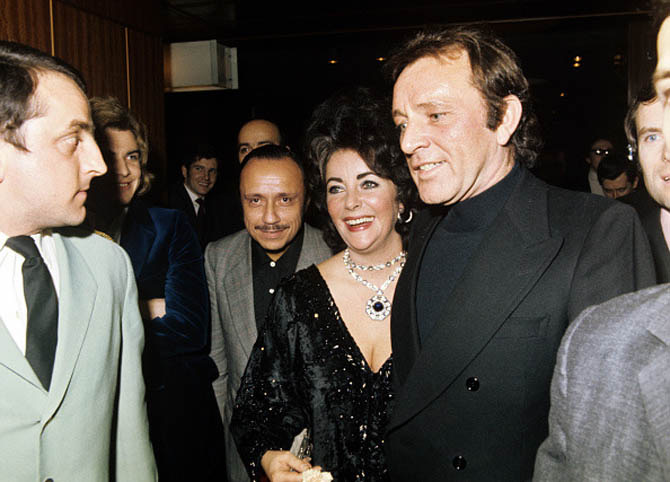 Richard Burton with Elizabeth Taylor who is wearing her Bulgari sapphire and diamond sautoir for the first time at her 40th birthday party in Budapest. Photo Getty

For Richard Burton’s 50th birthday party in 1975, another epic bash, she wore the Bulgari sapphire sautoir again with the hoops (seen in the photo at the top of this story). For the December 10th event at the Dorchester in London, she paired the jewels with a sexy cutout number.

And, of course, Taylor also wore the jewel at Studio 54 on May 21, 1979 for choreographer Martha Graham’s benefit honoring Halston. Taylor was at the disco with (remarkably) former first lady Betty Ford as well as Liza Minelli. Halston designed Taylor’s blue caftan ensemble for the evening to set off the Bulgari sautoir. 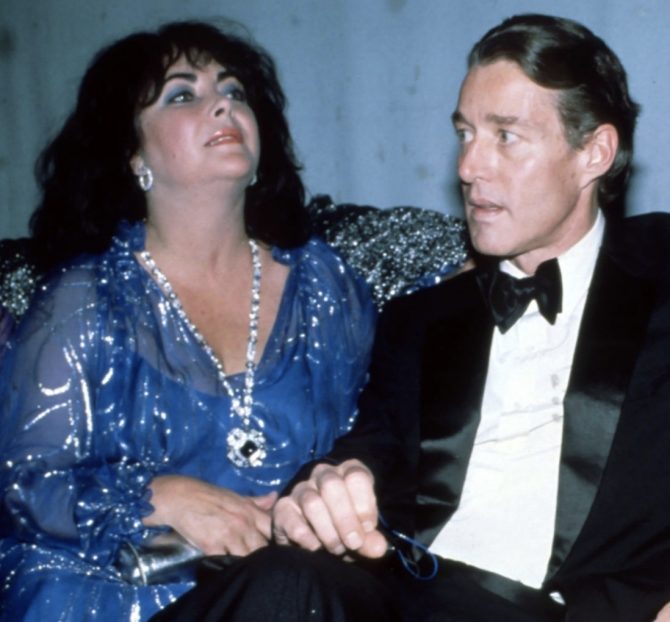 Taylor continued to wear the jewel at events throughout her life and it was a highlight in her 2011 estate sale at Christie’s in New York which is where I first saw it in person.

When I was gazing at the jewel during a preview party for the historic sale, there were several others standing in awe with me. What’s difficult to see in a photograph is just how sensational the sugarloaf sapphire is. It is so grand, it’s sculptural. 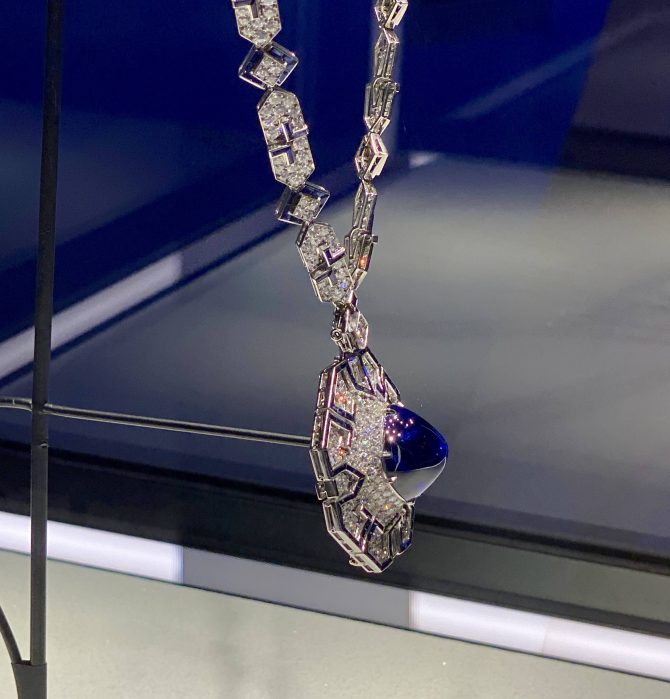 Side detail view of Elizabeth Taylor’s Bulgari sapphire and diamond necklace on display at the Brooklyn Museum. Photo Marion Fasel

I will never forget Lorraine Schwartz’s remarks as we stood there. The designer who became a good friend of Taylor’s later in her life was saying—no making that exclaiming—how you couldn’t even find a stone like that today. The size and color of the Burmese sapphire are just that rare.

And yet, Elizabeth Taylor wore it with ease everywhere.

Luckily for all of us jewelry geeks, the Bulgari Heritage department swept up the jewel at Christie’s for a whopping $5,906,500. And they send it out to exhibits like Studio 54: Night Magic frequently so it can be seen once again.