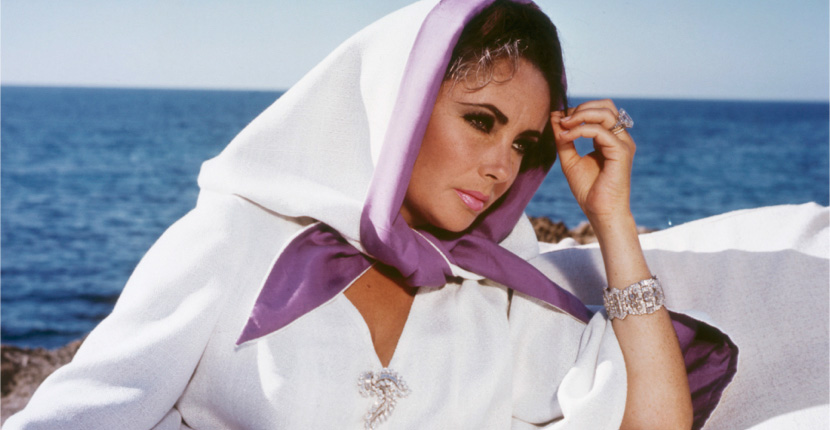 Elizabeth Taylor wearing the 33.19-carat diamond ring, formerly known as the Krupp, among other jewels as part of her costume for the 1968 film ‘Boom!’ Photo Getty

And how you can get a costume version of the 33.19-carat dazzler for a great cause

February 27, 2022—There was one jewel Elizabeth Taylor wore more than any other in her vast collection of treasures. As you might imagine the piece was not a small token. It was a giant dazzling diamond ring—33.19-carats to be exact. From the moment Richard Burton gave it to her in 1968, Ms. Taylor wore it steadily throughout life at formal events and casual occasions. It was her signature jewel.

In honor of what would have been the activist-movie star’s 90th birthday, the Elizabeth Taylor AIDS Foundation is giving away a limited number of replicas of the ring to people who make a donation of $500 or more to the organization. Find out more about the fund-raising initiative here. And read on for the story of the diamond.

Elizabeth Taylor had a wonderful way of flipping the script on certain subjects and she did just that with the story of the stunning 33.19-carat Krupp diamond. In her 2002 book My Love Affair with Jewelry, Taylor explained:

“This remarkable stone is called the Krupp Diamond because it had been owned by Vera Krupp, of the famous munitions family which helped knock off millions of Jews. When it came up for auction in the late 1960s, I thought how perfect it would be if a nice Jewish girl like me were to own it.”

Elizabeth Taylor and her husband Richard Burton became aware of the Krupp Diamond when it appeared at the New York auction house Sotheby’s Park-Bernet. There was a lot of interest in the diamond by several major collectors because of its wonderful qualities. It is considered to be one of the finest diamonds in the world.

According to the Gemological Institute of America (GIA), the Asscher cut diamond (also described as a cut-cornered rectangular gem) has been graded at the highest color D. The clarity grade is VS1 which means under magnification the minute imperfections are hard to see. In fact, a diagram of the gem created many years later states it may be flawless.

The Krupp is a Type IIa Diamond. The special grade means it is a chemically pure stone and most likely from the legendary mine in the Golconda region of India.

When Richard Burton won the gem at auction after a fierce bidding war, he paid the highest price for a diamond to date. It cost just over $300,000. (In 1969, Burton shattered this record when he paid more than $1-million for the 69.42-carat Taylor Burton Diamond, but that’s another story.)

As soon as the couple won the gem, they wanted it. Since they didn’t have insurance on the piece in place, the auctioneer who conducted the sale at Park Benet, Ward Landrigan, traveled to Wales where they were staying to deliver the ring and essentially watch over it while they secured the insurance.

The auctioneer who spent several days with Taylor and Burton shared some of his experience with People magazine in 2011:

“I remember the morning I brought her the Krupp diamond, [Burton] answered the door,” he recalls, adding that when he knocked at 7 a.m., the actor was still in his pajamas. “He opened the box and said, ‘Elizabeth!’ She came running out of the bedroom in her nightgown.”

As Burton presented Taylor with the stone, Landrigan says she exclaimed, “Oh s—t!” and tackled her then-husband. “She gave him a huge kiss,” Landrigan says. “In fact, it was so big they knocked the lamp off the table next to the sofa! She gave him a couple of big kisses [and squealed], ‘Oh Richard, I love it! I love it!’”

Next thing the couple had a press conference to share the news of the acquisition with the public. “We drove to the event in a convertible Rolls Royce, which was in itself interesting” remembers Ward. “Lord Harlech somehow officiated at this thing and I was just sort of there.”

Other details Ward shared with People happened in the following days:

And though she cherished the giant gem, she was willing to share, says Landrigan, who recalls watching a busload of schoolgirls gawk at Taylor and Burton as they lunched after a day on a film set. “Elizabeth called the manager in and said, ‘If you give the girls something to write on and send them in two at a time, I’ll autograph something for them,’” he says. “There must’ve been 50 of them and she let every one of them try on the ring, which of course gave me a heart attack, and it was amazing.”

Sharing the diamond with others and having a great sense of humor about the stone was a pattern Elizabeth Taylor continued throughout her life. According to one of her biographers, every maid in the Dorchester Hotel in London where Taylor and Burton often stayed was given the chance by the actress to try on the jewel.

One famous exchange, with Princess Margaret supposedly began when the feisty royal spotted the stone and said “How very vulgar.” To which Taylor replied, “Yeah, ain’t it great!” The twosome then erupted in laughter.

Once when Taylor was asked if the diamond was real. She said, “You bet your sweet ass it’s real.”

When a journalist asked her how much the stone weighed Taylor quipped, “Thirty-three and a third carats. Don’t forget the third.”

Taylor quite rightly once said of the diamond, “It feels nice and I think people just like to see a stone like that in the room.”

The legendary actress could also be quite poetic about the diamond. “It is wonderful to hold it up to your eye.  It’s like seeing into a corridor of infinity,” she once said. “The Krupp diamond is definitely my favorite piece of jewelry.”

In 2011 the Krupp Diamond was part of Taylor’s legendary collection of jewelry sold at Christie’s in New York. A marquee piece in the historic auction, the gem was renamed The Elizabeth Taylor Diamond. It was a fitting new title for the diamond she loved so much for so long.

It was bought by a South Korean conglomerate name E-land. At the time of the sale, the company said that the diamond would be exhibited at “E World,” an amusement park in Daegue.