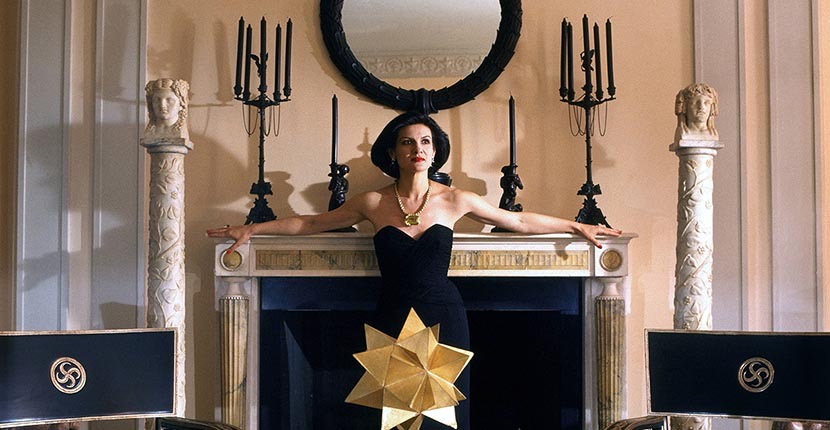 Right before the pandemic shut everything down in New York, I received a special gift of a Paloma Picasso silver Scribble brooch. The jewel was such a surprise, I welled-up after I opened it. The design is one I have long loved, but it never occurred to me to buy one. Once I started wearing it pinned to my beloved puff sleeve Ulla Johnson grey sweatshirt for walks with my dog Hunter to the park and trips to the grocery store, I realized what a great treasure it is. The weight of the piece is magnificent. All of it got me to thinking back to Paloma Picasso’s heyday at Tiffany & Co.

When Paloma Picasso debuted her first collection for Tiffany in 1980, Vogue said, “It redefined ‘real’ jewelry in a modern sense.” At a time when “real” jewelry was expected to have diamonds, Picasso designed with semiprecious stones. The sophisticated way she handled the gems infused the stones with glamour. “She would take a citrine and make it look as important as a canary diamond,” proclaimed legendary Vogue accessories editor Candy Pratts Price.

What the press saw as a bold move away from diamond jewelry was intuitive for Picasso. “I like big stones and with semiprecious stones you can work in really large sizes,” explained the designer when I interviewed her for Bejeweled, a book I co-authored with Penny Proddow. “I guess that comes from being the child of two painters.” 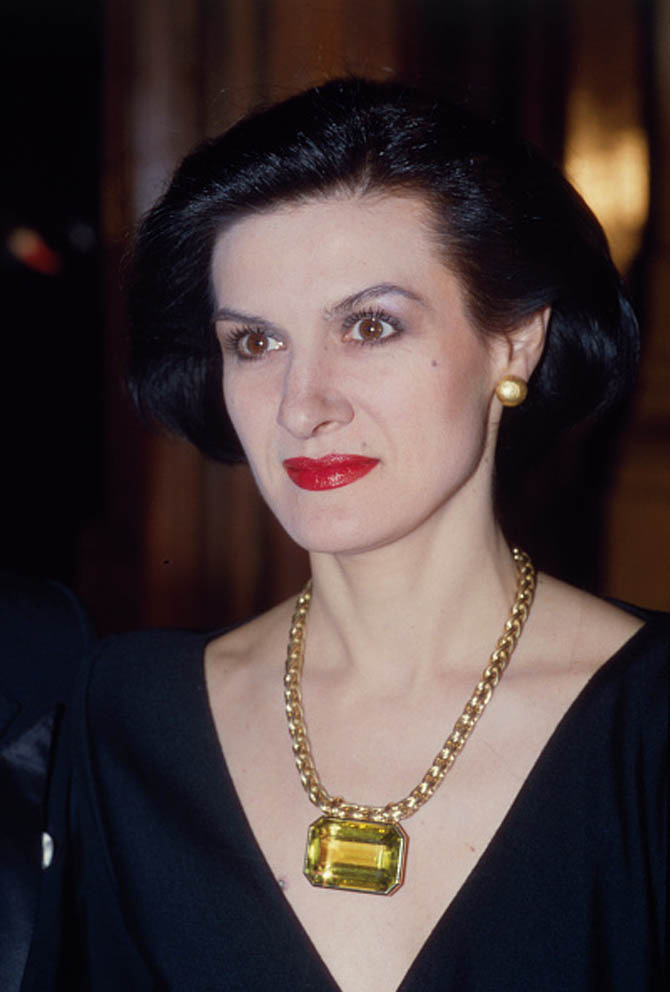 The youngest daughter of Pablo Picasso and Françoise Gilot, Paloma remembered thinking about aesthetics as early as age twelve, and jewelry was very much a part of her musings. “When I was young, I would often ask my mother if I could review her jewelry with her,” says Picasso.

She got her first professional experience in jewelry in 1968, designing costume pieces for a Paris theater production. Then she did a collection of costume jewelry for Yves Saint-Laurent. Picasso mastered the fundamentals of precious jewelry by taking courses at a Paris jewelry school. After that she did special commissions for friends and few pieces for the Greek jeweler Zolotas. 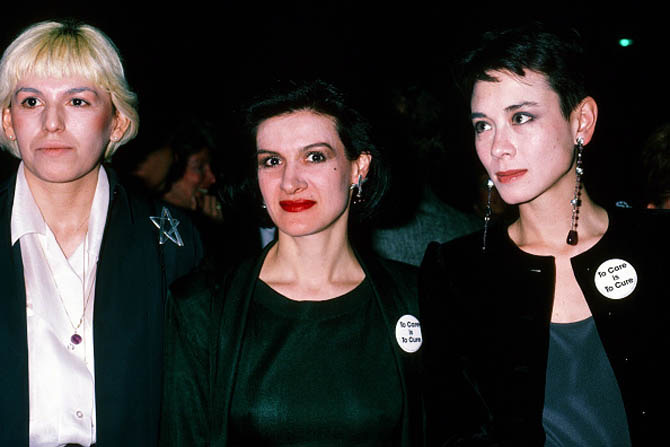 By the tail end of the 1970s, Picasso had become part of the French fashion world with talent and an eye for talent. Manolo Blahnik credits her with opening up his career when she introduced him to Vogue editor Diana Vreeland. Her own career leapt to an international level when Tiffany design director John Loring asked her to join the firm as a byline designer. Loring explained he chose Picasso because he felt “her love of ample scale and strong color would be the perfect vehicle to perpetuate Tiffany’s traditional supremacy in semiprecious stones.” 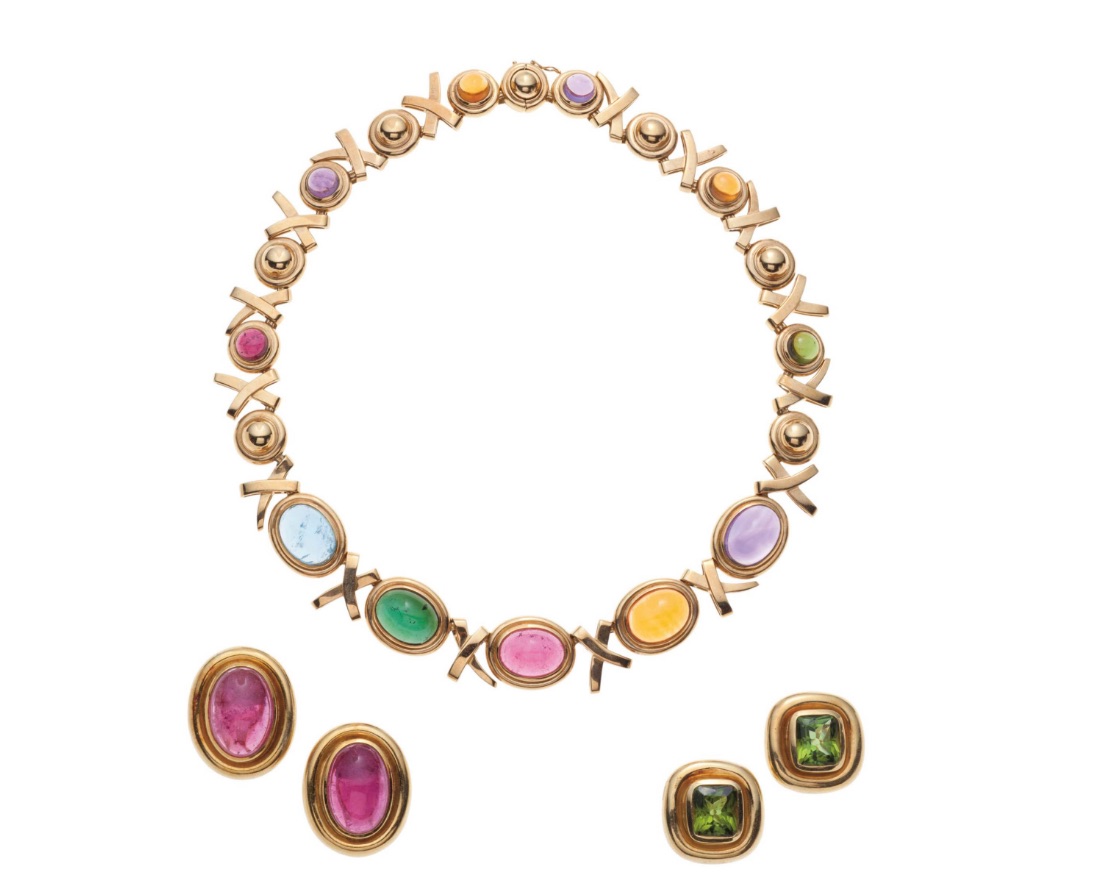 A Paloma Picasso for Tiffany & Co. X necklace set with various semiprecious stones and earrings sold a Christie’s. Photo via

If Charles Lewis Tiffany, Louis Comfort Tiffany, and gemologist George Kunz, the men who established the firm’s reputation for fine work with semiprecious stones in the early years of the 20th century, could have seen Picasso’s creations with semiprecious stones, they would be delighted that a rock hound was firmly in place at Tiffany. But they would not have recognized her style, since it didn’t derive from historical sources.

For a thoroughly modern jewels statement jewel made in 1986, Picasso wrapped a 396.30-carat kunzite in billowing diamond ribbons, which curled around a necklace of South Sea baroque pearls. The jewel was donated to the Smithsonian Institution in celebration of Tiffany’s 150th anniversary the year after it was made. 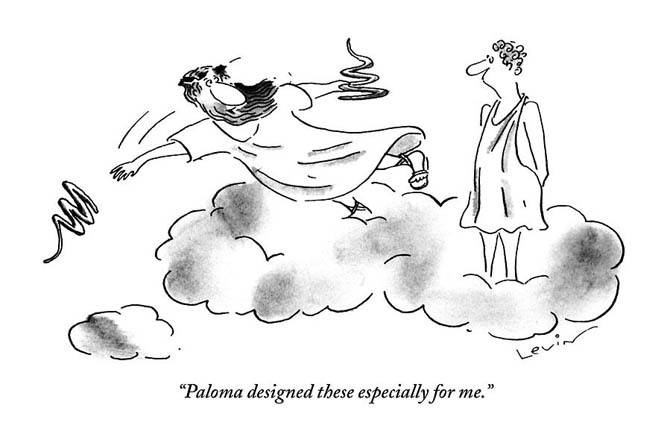 A 1995 cartoon from The New Yorker with Paloma Picasso’s Scribble brooch. Photo via Conde Nast

Big bold jewels with semiprecious stones were almost all Picasso did during her first few years at Tiffany. They established a strong image for the designer, but her signature style was not complete until around 1983 when she introduced the flip side to her luxury look. “I realized I should be doing something that was easier to manufacture, more accessible in price,” she explained. The pieces she came up with were little personal expressions in silver and gold that became huge successes. 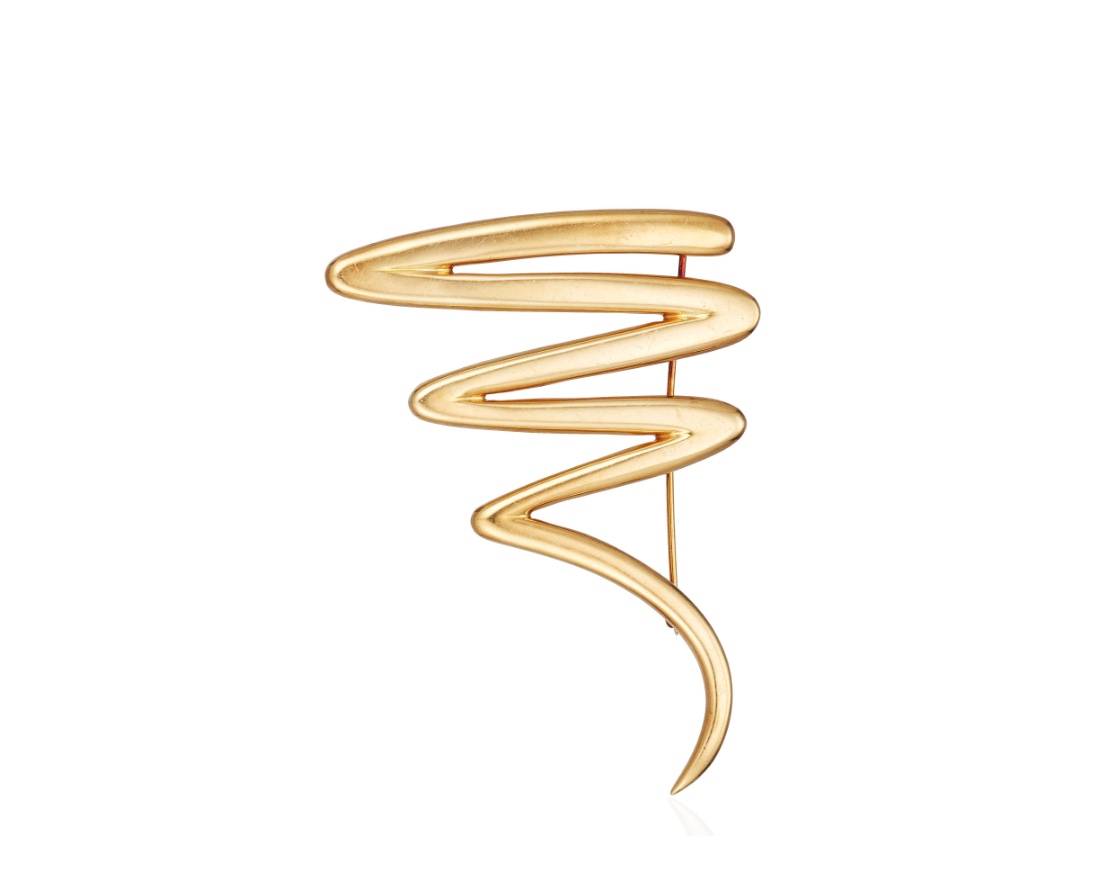 A gold Scribble brooch by Paloma Picasso for Tiffany & Co. Photo via Christie’s

Her Scribble brooch design, that made me think of her fascinating story, was inspired by the graffiti that was on the streets and subways in New York City during the 80’s and a controversial part of the art world. “At the time everybody was talking against graffiti,” said Picasso. “I thought, let’s give a good name to graffiti.”  The origin story of the jewel makes me love my special silver Scribble brooch even more.

At Auction: A Cool 1969 Moon Ring By Cartier