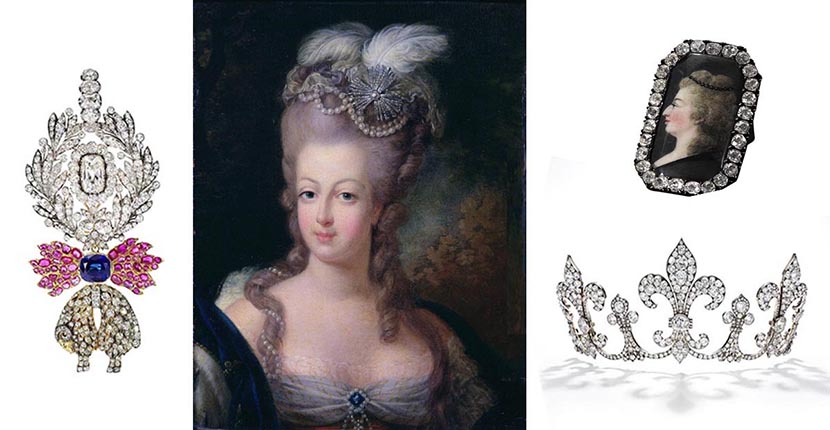 It caused a sensation when Sotheby’s broke the news in June that there would be a sale including several jewels from the collection of Marie Antoinette and many other pieces from members of the Bourbon Parma family. Well, now Sotheby’s has reignited the intense interest by releasing more highlights from the November 14 auction. With this new wave of information Sotheby’s created a jewelry family tree of sorts (below) showing who owned what and how they were all related. 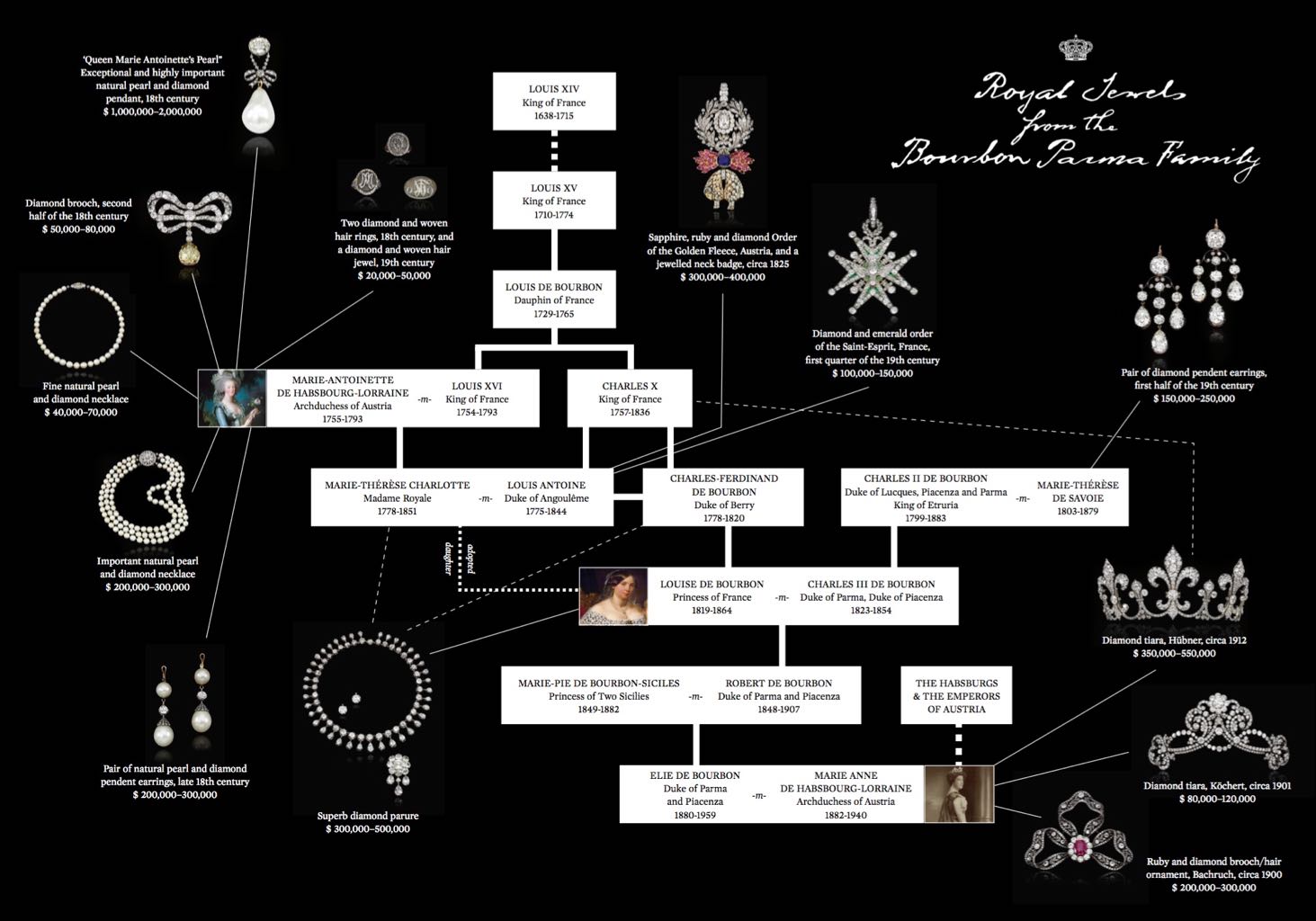 If you are wondering how these jewels remained intact over time while so many French Crown Jewels were broken up, sold or lost over the years. Following is Sotheby’s explanation of the history.

During an international tour of exhibitions in the coming weeks, the public will be able to view the historic jewels at various Sotheby’s locations. The jewels will be in: Hong Kong from September 27-October 2, Dubai from October 7-9, New York from October 12-16, London from October 20-22, Singapore from October 26-27, Taipei from October 30-31 and Geneva from November 10-11. The sale will take place in Geneva on November 14.

See the new highlights from the collection below. See the jewels from the June announcement of the auction here. 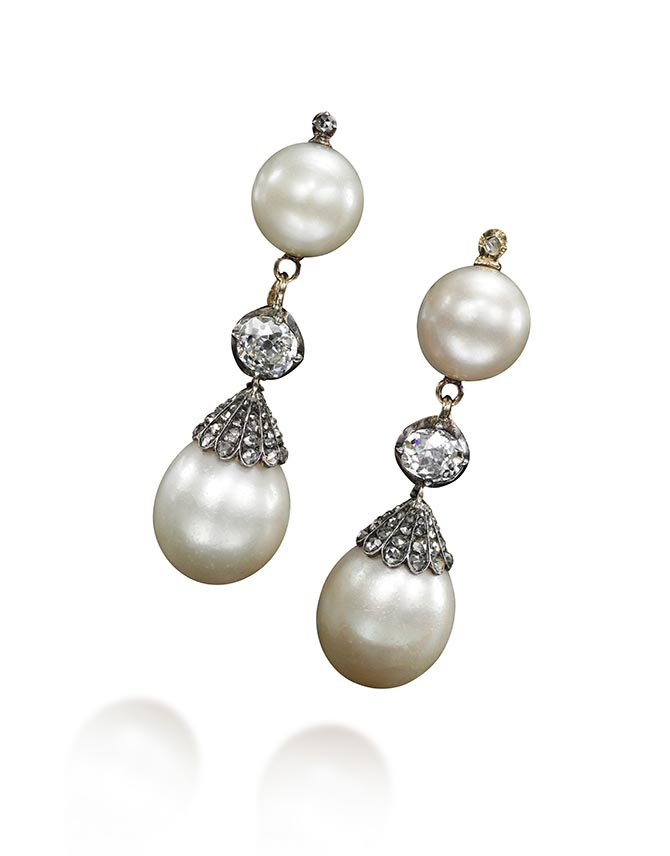 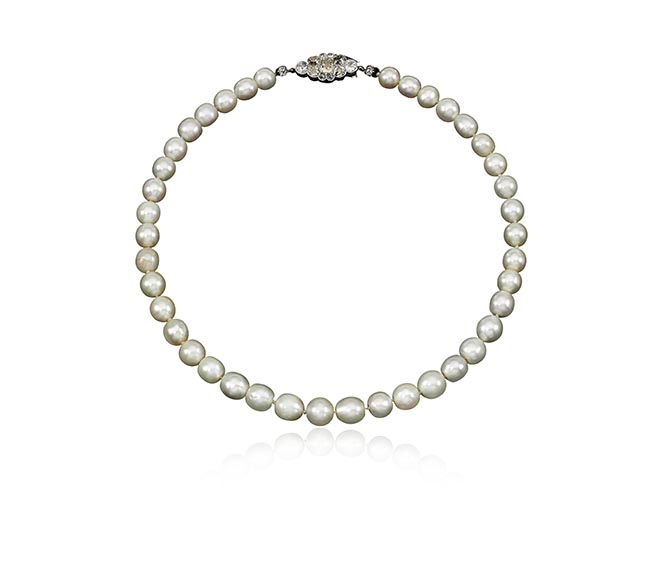 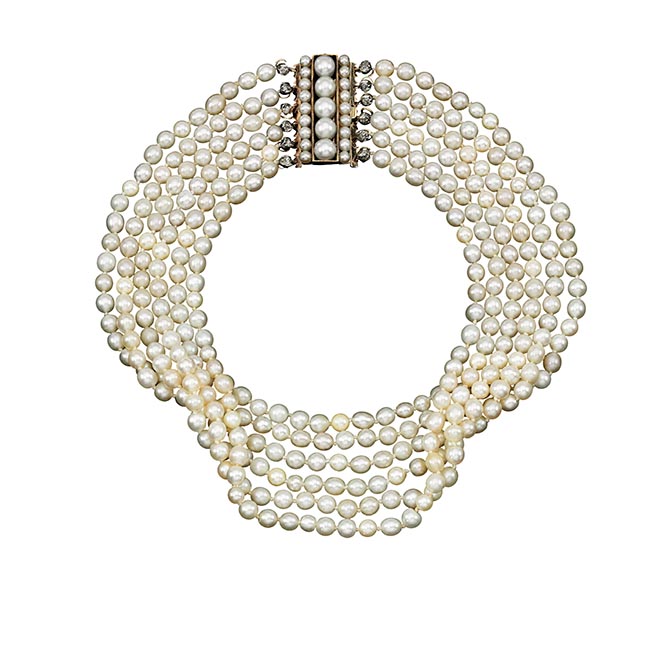 This six-strand pearl necklace has a direct link to Marie Antoinette. According to Sotheby’s, the unaltered clasp was part of her collection, and features five large and 18 smaller natural pearls. Marie Antoinette wore it on one of a pair of six-row natural pearl bracelets. The necklace was commissioned by later generations of the Bourbon Parma family and strung with cultured pearls. The estimate for the jewel is $5,000-$8,000. 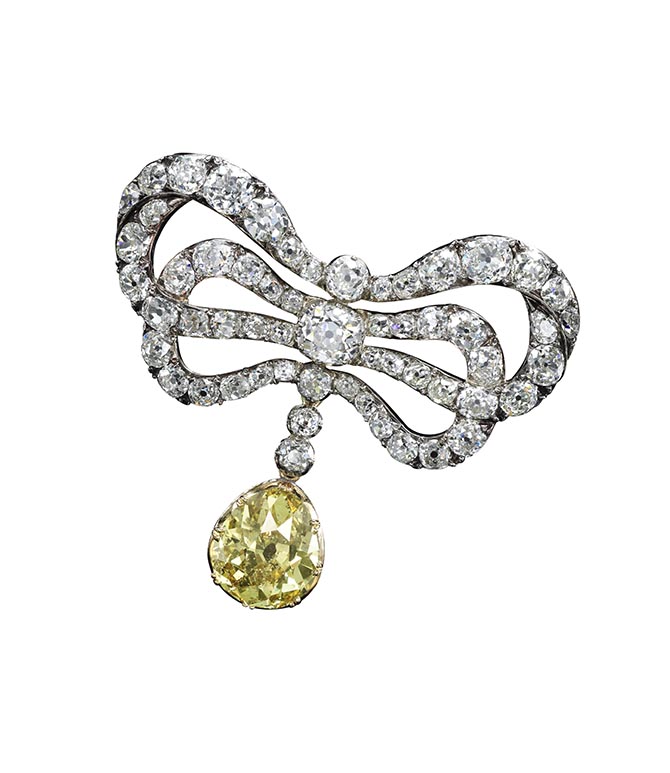 Th ribbon section of this diamond brooch from the late 18th century was formerly part of Marie Antoinette’s collection. It is thought that the yellow diamond pendant was added at a later date. The estimate for the jewel is $50,000-$80,000. 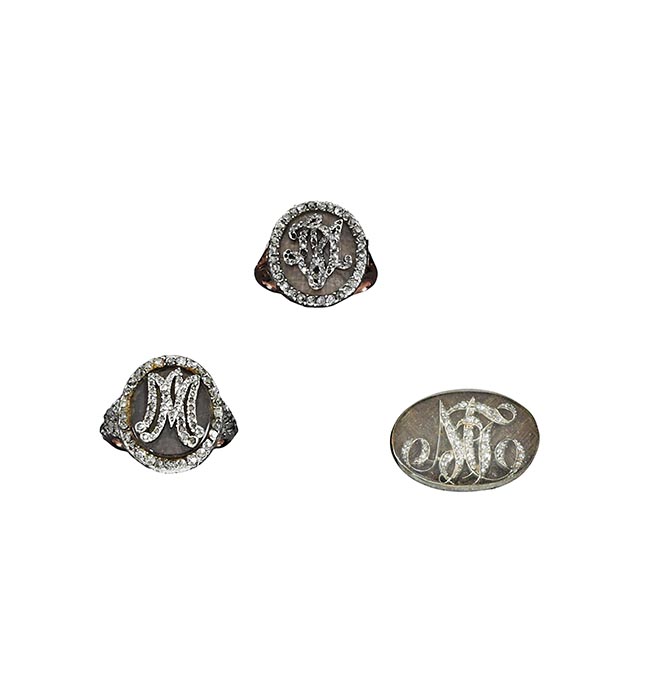 Marie Antoinette’s diamond ring bearing the initials MA, contains a lock of her hair. It is being offered together with a ring with the monogram and hair of her father-in-law, Louis, Dauphin of France (1729-1765) who died before ascending the throne and a diamond plaque bearing the monogram MT set in diamonds, which refers to Marie-Thérèse of Savoie (1803-1879), Duchess of Parma and wife of Charles II, Duke of Parma. The estimate for the two rings and plaque is $20,000-$50,000. 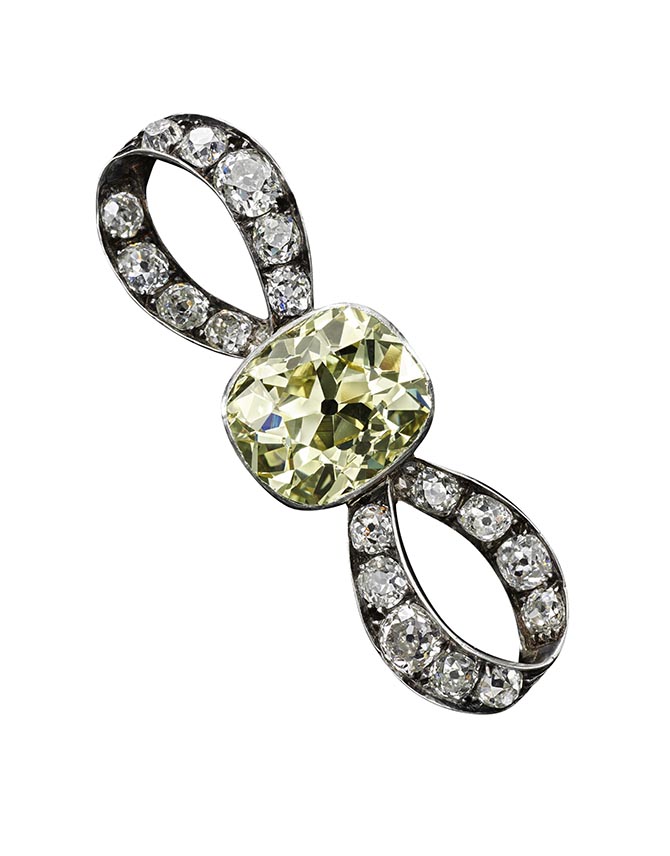 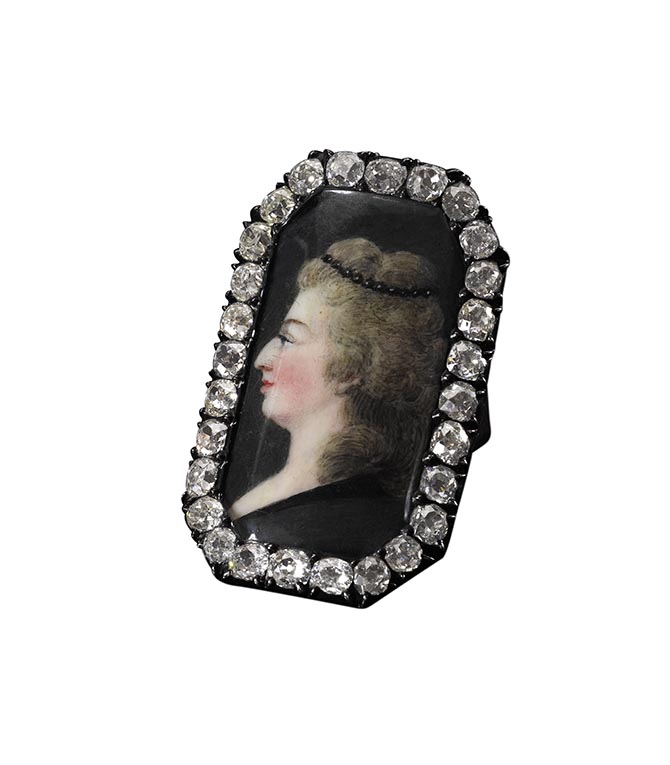 Also passed down through generations of Marie Antoinette’s descendants is a diamond ring decorated with her portrait, made in the late 18th century. In her will, Marie Antoinette’s daughter, Marie Thérèse de France (also known as Madame Royale), mentions that the portrait, which is set within a frame of pearls, is a likeness of her mother. The estimate is $8,000-$12,000. 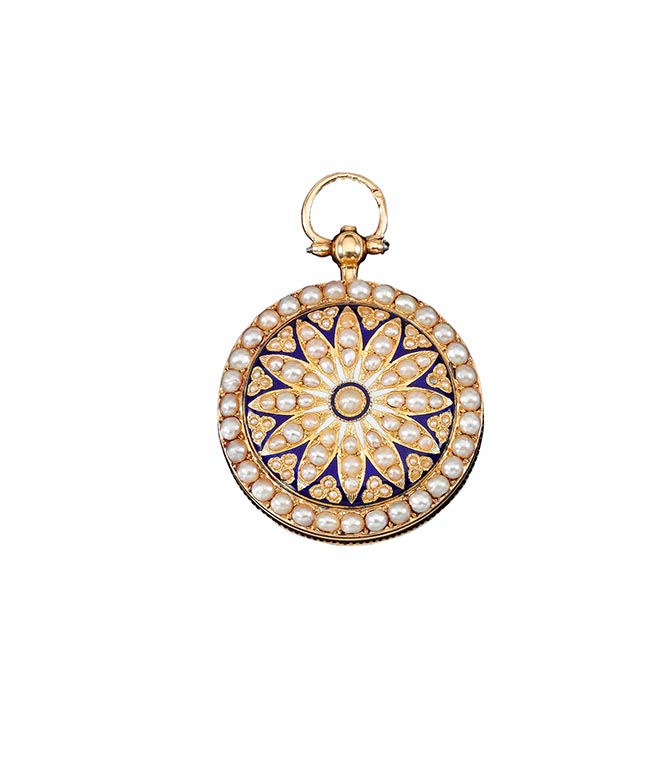 Marie Antoinette’s pocket watch is decorated with blue enamel and pearls. It bears the initials M.A. on the inside of the case, along with three fleur de lys motifs. Although the movement of the watch has been changed, the design has not. The estimate is $1,000-$2,000.

JEWELS FROM THE FRENCH ROYAL FAMILY

The Sotheby’s Geneva sale includes jewels that belonged to King Charles X (1757-1836), the last King of France and last of the Bourbon rulers, his son, the Duke of Angoulême and their descendants. According to the auction house he was resolutely conservative and accused by his own brother Louis XVI of being “plus royaliste que le roi” (more royalist than the king). Charles X revived a number of orders of chivalry which had been abolished during the French revolution and under Napoleon’s rule. 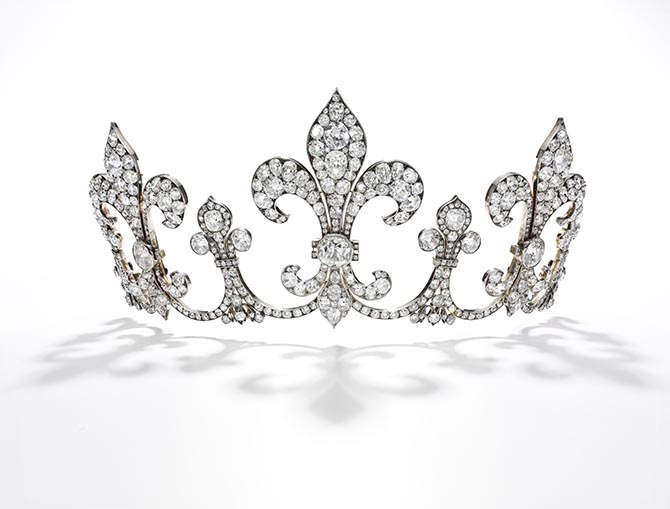 The tiara was created around 1912 for Archduchess Maria Anna of Austria (1882-1940) by the celebrated Vienna jeweller Hübner using the precious stones from a Royal Order. The fleur de lys motifs can be detached and worn separately as brooches. The estimate is $350,000-550,000. 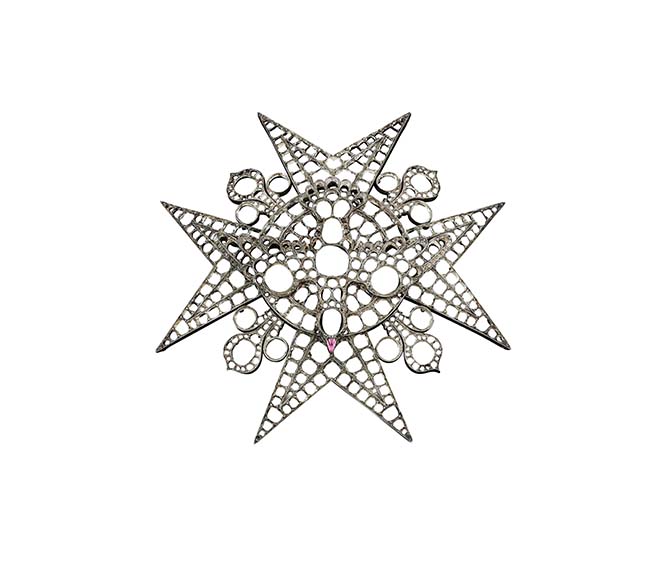 The diamonds which adorn the tiara came from a badge of the Royal Order of the Holy Spirit, a French order of chivalry founded by King Henri III in 1578. The insignia was originally owned by Charles X, Marie Antoinette’s brother-in-law. The diamonds later passed to Robert I, Duke of Parma (1848-1907). The frame of Charles X’s order, which originally held the diamonds, has remained in the family and will also be offered in November. The estimate is $150-$300. 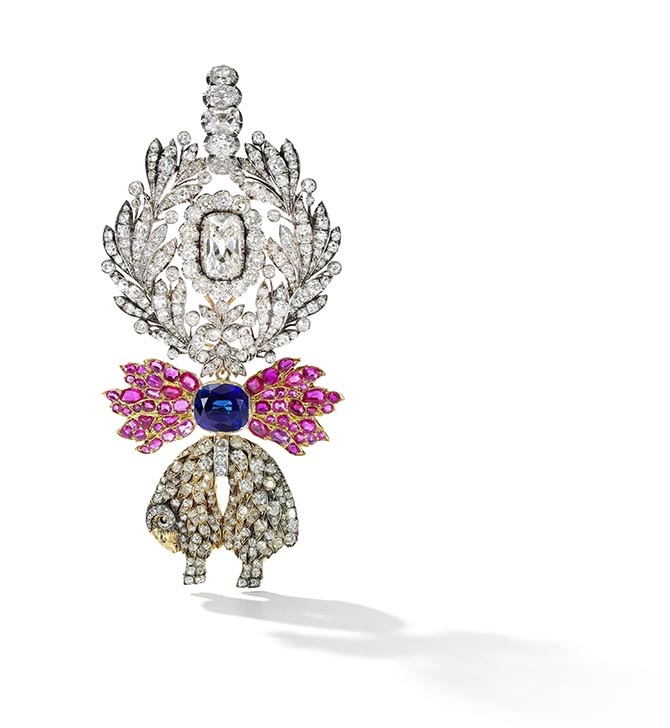 The Order of the Golden Fleece. Photo Sotheby’s

According to Sotheby’s, “The Order of the Golden Fleece is widely considered to be the most prestigious and exclusive order of chivalry in the world. It is likely that Louis Antoine received the badge following his participation in the Spanish Expedition of 1823, thanks to which his cousin, Ferdinand of Bourbon was restored as absolute king of Spain. A sumptuous example of the order’s symbol, beneath a large white diamond this badge features the traditional French royal symbol, the oriflamme, represented by a central sapphire, surrounded by flames composed of rubies. The fleece of the ram forms the lower part of the jewel, realized in gold and diamonds.” 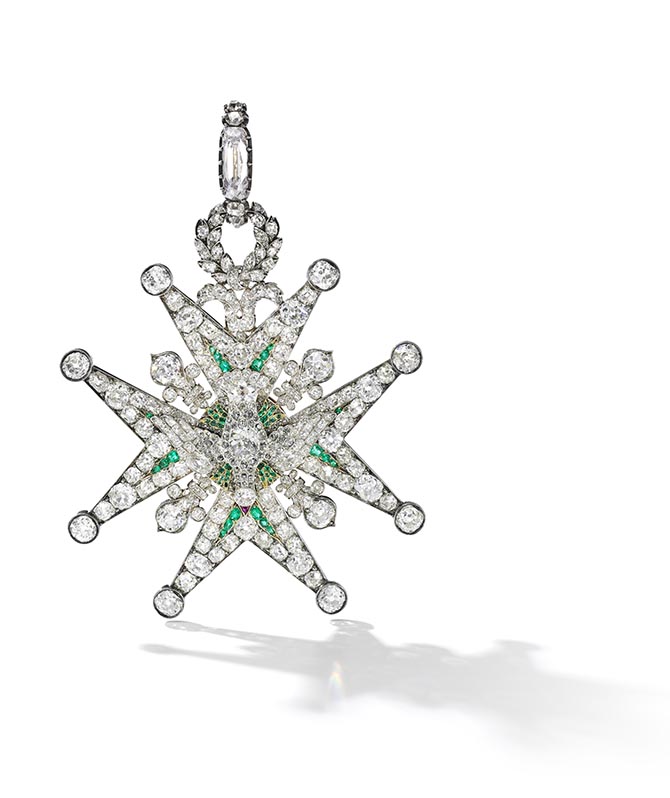 This plaque of the Royal Order of the Holy Spirit was awarded to Louis Antoine, Duke of Angoulême before being passed down through the generations to Robert I, son of Charles III of Parma and Louise de France (and Marie Antoinette’s great-nephew). The most prestigious French order of chivalry during its 252 years of existence (1578-1830), it was abolished during the French Revolution, and then revived by Charles X who restored the ceremonies of the Order. The loop at the top of the badge (adorned with baguette- and round-cut diamonds) was designed so that the order could be worn on a tie without having to alter the jewel. The estimate is $100,000-$150,000.

From a separate branch of the family, the collection to be offered in November at Sotheby’s will include sumptuous jewels passed down through the Bourbon Parma family from the imperial family of Austria. 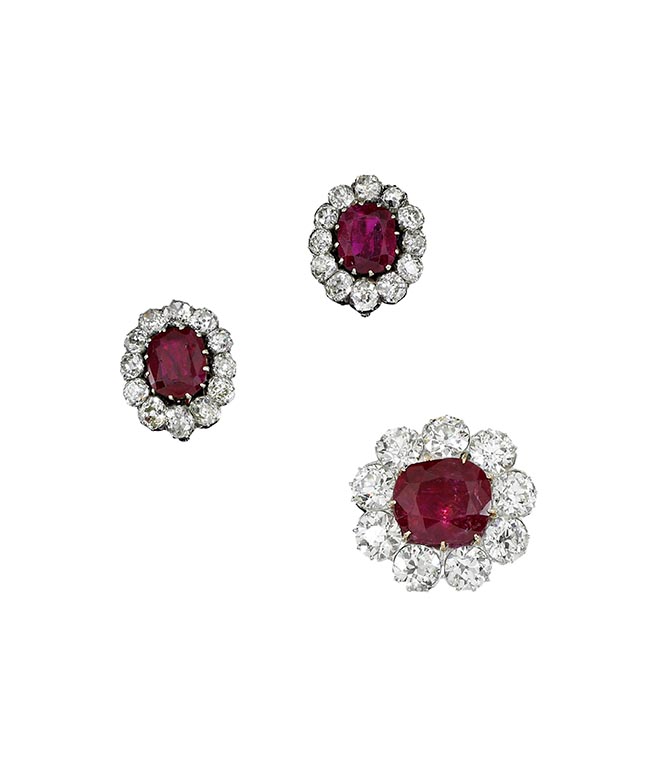 This Burmese ruby and diamond set, composed of a brooch and a pair of earrings,
dates from the turn of the last century. Originally part of the collection of Queen Isabella II of Spain (1830-1904), the set was later purchased by Archduke and Archduchess Frédéric of Austria and inherited by their daughter, Maria Anna, Archduchess of Austria (1882-1940), who mentions it in her inventory of the family jewels. The estimate is $150,000 -$250,000. 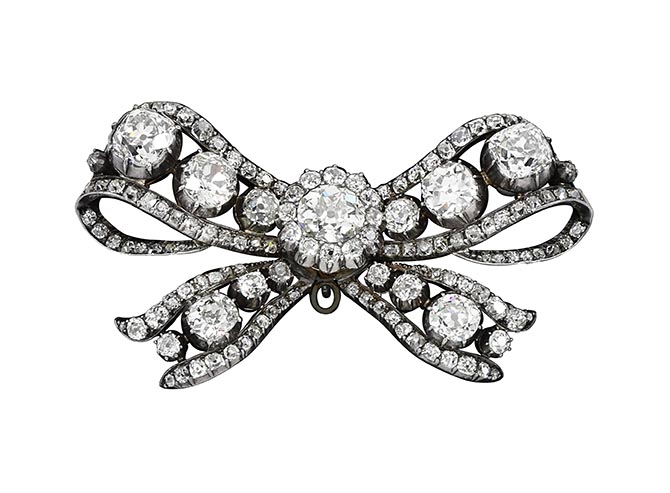 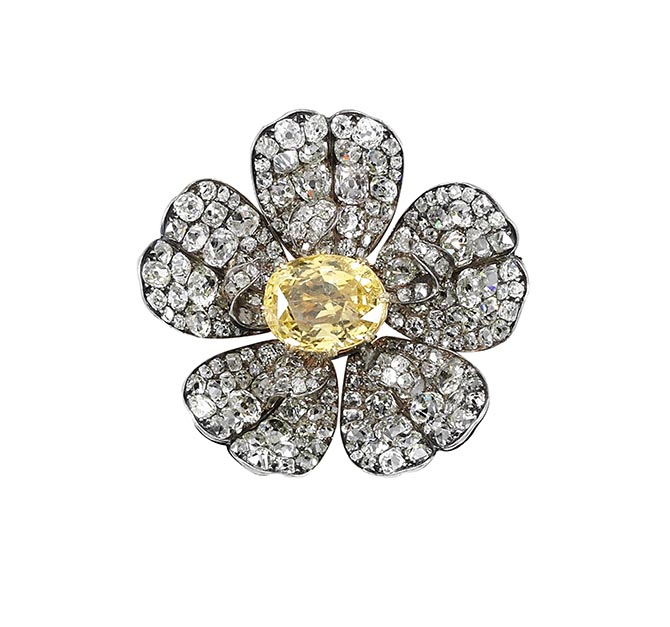 In her inventory, Maria Anna recorded that this diamond brooch, with a yellow sapphire in its centre , originally belonged to her mother, Princess Isabella of Croÿ (1856-1931). The estimate is $40,000-$65,000. 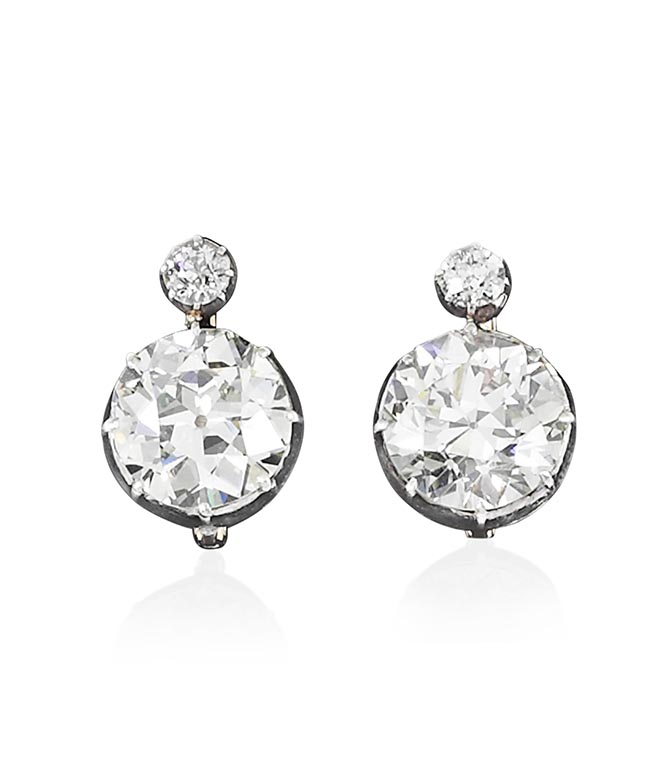 Maria Anna received these diamond earrings  from her father, Archduke Frédéric, on the occasion of her wedding in 1903. The estimate is $50,000-$80,000.