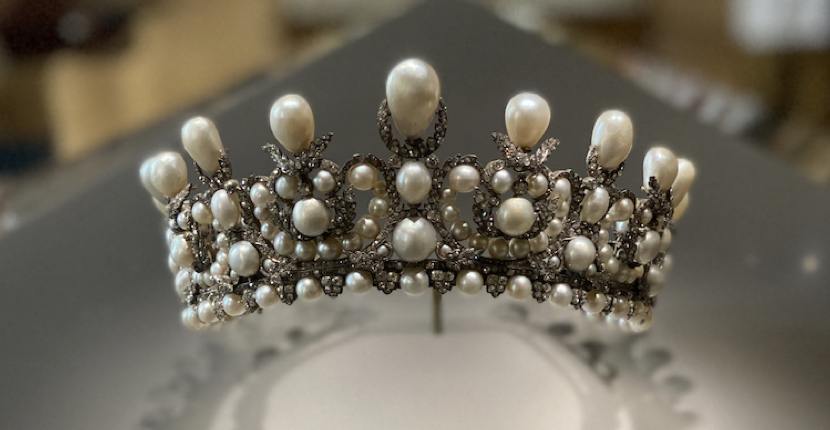 Empress Eugenie’s diamond and pearl diadem designed by Alexandre-Gabriel Lemonnier in 1853 in the Galerie d’Apollo at the Louvre. Photo Marion Fasel

Diary of A Jewelry Journey to Paris

Everything old is new again

August 11, 2021—My emotions were running high when finally, after a year and a half of being grounded, because of, well you know, I was boarding a plane to Paris for Couture week when the High Jewelry is shown to the press. I knew I was excited for the journey, but I did not realize quite the amount of pent-up emotion I had about the freedom to cross the Atlantic once again. As I walked down the jetway, I welled up. The joy was very real and The City of Lights proceeded to exceed all expectations.

There was the eye-popping glamour of the new High Jewelry collections at Boucheron, Cartier and Repossi. One of the few independents on the French jewelry design scene, Elie Top showed a delightful collection of animal themed jewelry.

I also spent more time than usual looking at jewelry and jewelry adjacent spaces in museums, because so many displays had been recently renovated. These exhibits are permanent and I highly recommend adding them to any jewelry lover’s Paris itinerary.

Find out more below.

Please note as of publication of this story, it is required to make reservations in advance of visiting the museums. Here are links to the Louvre, Hotel de la Marine and Musée Carnavalet.

The French Crown Jewels in the Louvre’s Galerie d’Apollo

In 2019, the last time I paid a visit on the French Crown Jewels at the Louvre, many were bunched up in one vitrine. Well, things are very different now. The jewels have been grandly displayed in the newly renovated Galerie d’Apollo. The renovation project, which was underwritten by Cartier, opened to the public in January 2020.

The Galerie has an air of over-the-top Versailles decadence and there is a good reason why. It was originally designed as a reception hall for Louis XIV and was used as a model for the Hall of Mirrors at the Chateau. The grandeur, that is in its full sparkling glory, makes you feel like the Sun King and his court could come walking in at any moment.

There is a lot to see including the 140.64-carat Regent Diamond acquired by the French Crown collection in 1717 and several historic jewels.

Related: When and Why the French Sold the Crown Jewels

The jeweler Kramer made this bow brooch for Empress Eugénie in 1855. When it was sold with the French Crown Jewels in 1887, the piece landed in the collection of Mrs. Caroline Astor. It eventually moved into the collection of Ralph Esmerian who I worked for as an archivist and curator.

When I was writing about the piece for a book on the history of diamond jewelry made over the last 150 years, it would be on my desk during the day so I could study it. Ralph sold it to the Friends of the Louvre in 2008. I had seen it on display previously, but it was very different to look at the jewel in the Galerie d’Apollo. It took my breath away.

Emerald and diamond necklace made by Nitot in 1810 is part of a set that was given by Napoleon I to his second wife Marie Louise as a wedding present.

Sapphire and diamond diadem and necklace purchased in 1821 by Louis Philippe from Hortense, daughter of Napoleon I’s first wife Josephine. It was most likely modified from the original design. The sapphires are from Sri Lanka.

The Hôtel de La Marine is not a hotel at all. It is a neoclassical palace on the Place de la Concord that has been transformed into a museum after a $157-million four-year renovation. The opening in June 2021 marked the first time the public was allowed into the historic space for around 250 years. The building once housed the Marine or Ministry of Naval Affairs. It also functioned as a storehouse for the royal household. While that may not sound glamourous, it was.

I remember vividly the first time I heard about the Hôtel de La Marine. It was in a story about the Al Thani Collection and where it was finally going to land after years being on display at museums around the world. As you may have guessed, the Al Thani group did indeed help finance the renovation.

While there is not any jewelry at the Hôtel de La Marine there is a great room where jewelry history happened which makes it a perfect companion piece to the Galerie d’Apollo at the Louvre.

In 1792, over four nights in September, thieves broke into the Hôtel de La Marine during a turbulent time in Paris and proceeded to steal the crown jewels. On the fourth night some of the 27 thieves started bragging around town and were ultimately caught. Approximately, three-fourths of the collection was recovered including the Regent diamond.

Another fascinating bit of jewelry history also revealed in the Hôtel de La Marine came in the form of a lathe. The high-tech audio guide, which is similar in style to a Beats headset, explained that mechanical jewels and crafts were popular among society. The statement set off alarm bells. Some of the best French jewelry has moving parts and the tradition goes on to this day. Almost everything in Elie Top’s collection has some kind of mechanical movement.

Beyond these jewelry adjacent subjects at the Hôtel it is also astonishing just to see the space and renovation that makes you feel as though you are walking back in time. Find out more about the meticulous work in this New York Times article Stripping Away History’s Layers and Revealing A New Museum

I have always known the Georges Fouquet Art Nouveau boutique was located at the Musée Carnavalet, but for one reason or another never quite got there to see it. Well, this trip was the perfect timing because as I learned on the wonderful French Jewelry Post, the museum just reopened in June after a four year renovation.

The Fouquet boutique is a temple of Art Nouveau style. It was designed by Alphonse Mucha, a multitalented artist who worked closely with the legendary French actress Sarah Bernhardt. He was responsible for the illustrated posters with Bernhardt’s image plastered all over Paris to promote her plays.

Fouquet’s boutique was designed by Mucha in 1901, the year after the International Exposition where Art Nouveau was introduced to the world. Fouquet became internationally known at the event and part of his success was pieces designed by Mucha. For the boutique, Mucha conceived everything from the bronze on the exterior of a woman holding jewels to the door handles and mosaics on the floor.

The little shop was located at 6 Rue Royal opposite the celebrated nightclub Maxim’s. In 1923 as the Art Nouveau style gave way to Art Deco, the shop was dismantled. Georges Fouquet donated it to the Musée Carnavalet in 1941.

Detail of the ceiling at the Georges Fouquet boutque.

Detail of the floor of the Georges Fouquet boutique.

Catherine Deneuve and the Art of Portrait Rings