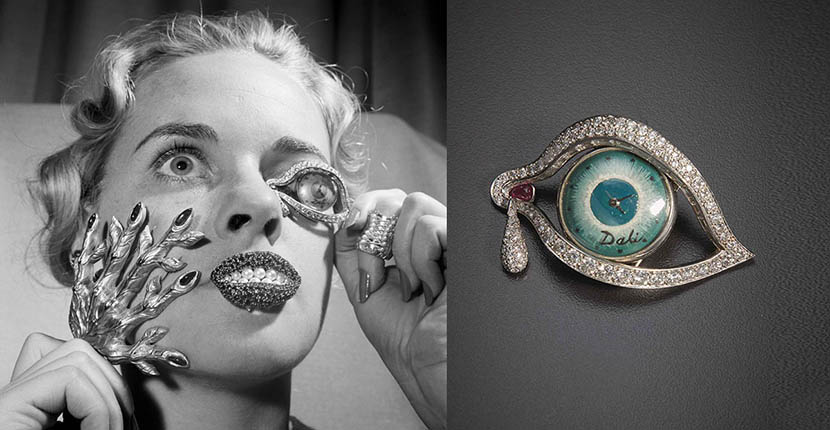 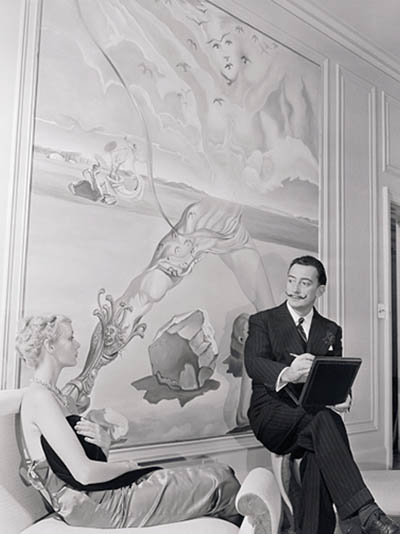 May 12, 2017—Artist Salvador Dalí gave as much thought to the meaning of jewelry as he did to designing it. When pieces he created in collaboration with Fulco di Verdura appeared in a 1941 Vogue story “Dali’s Dream of Jewels,” notes from his sketchbook were included that said:

The ideal Object to me is an Object that is useful for absolutely nothing; that could be used for writing or removing superfluous hair or for telephoning; an Object which would not be placed on the mantelpiece or a Louis XIV commode; an Object which one is forced simply to wear—a jewel.

In 1949 Dalí signed a contract with the New York based Argentinian jewelry manufacturer Carlos Alemany to create his own collections. Before the jewels were even made, 22 pieces were sold from the designs to the Philadelphia banker and philanthropist Cummins Catherwood and his wife Ellengowan. They were great believers in Dalí’s jewelry design talents and not only displayed the collection in the living room of their mansion in Haverford, Pennsylvania, they also supported the work in gallery exhibitions. 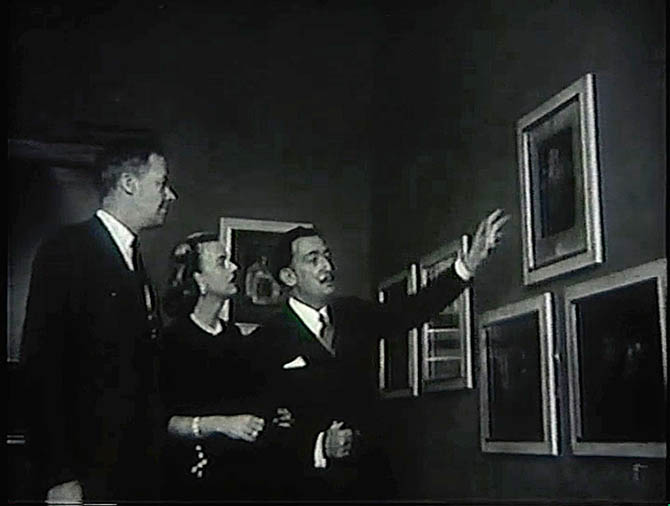 Dalí giving a guest and Ellengowan Catherwood a tour of one of his art exhibits in 1959. Photo courtesy of Sotheby’s

In 1958, the couple sold the collection to the Owen Cheatham Foundation to carry on the tradition of displaying the jewelry like works of art. The Foundation presented the pieces in a touring exhibit at fund-raising events. An accompanying catalogue titled Dalí, A Study of his Art-in-Jewels (a great book that can be found on Amazon.com) included an essay by A. Hyatt Mayor, curator of prints at the Metropolitan Museum of Art. There were also snippets and captions by Dalí who had made a 180-degree turn on the meaning of the jewelry from when he began to design it. The artist said, “The jeweled pieces you find in this book were not conceived to rest soullessly in steel vaults. They were created to please the eye, uplift the spirit, stir the imagination, express convictions.” 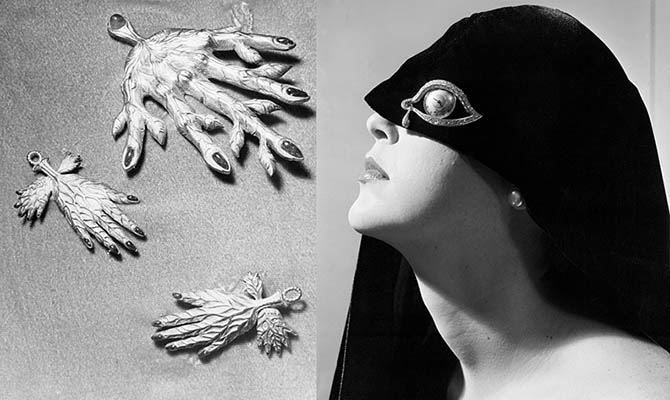 The original caption for the image on the left when it was reviewed by the press in 1950: “Parisians will have an opportunity of viewing a collection of objets d’art and and jewels designed by Salvador Dalí. They are being presented by the Catherwood Foundation of Bryn Mawr. Some of the items included in the collection are these leaf-veined hands made of sculptured gold, rubies and emeralds.” The original caption for the image on the right: “If you have survived the pictures of limp watches hanging over table edges like soggy pancakes, you ought to take this newest Salvador Dalí contribution to progress in your stride. The high priest of surrealism has turned his hand to three-dimensional art with his, ‘Dalí Jewels.’ An ‘eye watch’ set in a velvet mask. The eye is blue and the lids surrounding it are set with rows of diamonds. The teardrop is also diamond laden.”

While the Catherwoods must have been delighted the Owen Cheatham Foundation’s presentation of their Dalí jewelry collection was critically acclaimed by esteemed critics from The London Times and Art News not to mention architect Philip Johnson, Ellengowan realized there was one jewel in the collection she couldn’t live without, The Eye of Time brooch. It was among Dalí’s most well-known designs and the cover piece on the catalogue Dali, A Study of his Art-in-Jewels. The pavé-set diamond and platinum eye brooch has baguette-cut diamonds set along the lid, a diamond tear drop pendant and a ruby at the lacrimal sac. The dial of the watch was hand painted and signed by Dalí. Movado was responsible for the mechanical movement. 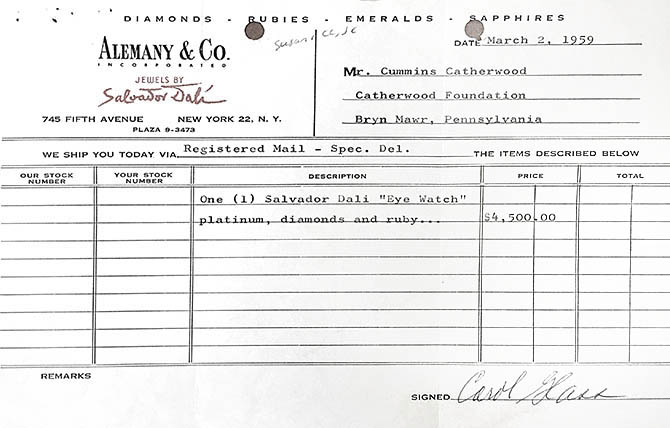 The piece Dalí agreed to recreate for his patron in 1958, in the photograph at top, is now being offered for auction at Sotheby’s in New York on May 17, 2017 with an estimate of $300,000 – $400,000. The 2¾-inch long jewel is one of only four know examples of The Eye of Time. One was sold to a private collector by Sotheby’s on May 8, 2014 for $1,055,000. One is in a European Royal collection. The Eye of Time in the The Owen Cheatham Foundation is on permanent display at the Fundació Gala-Salvador Dalí in Figueres, Spain.