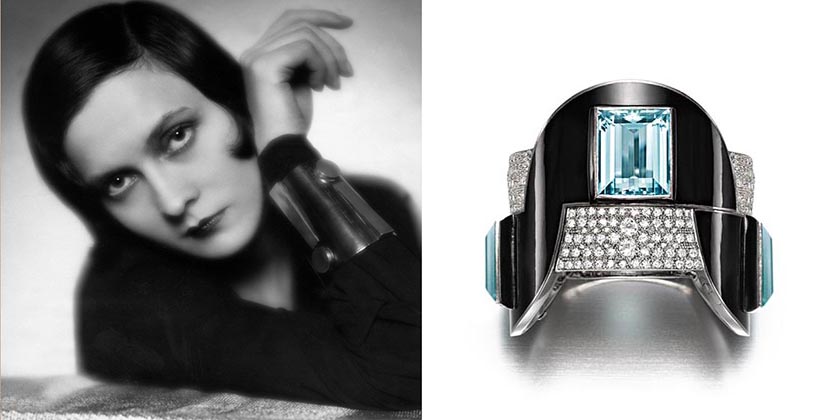 French film star Arletty poses in a cuff by Jean Fouquet and an aquamarine, diamond, enamel, white gold and platinum Art Deco cuff by the designer from the Siegelson collection Photo Getty and Siegelson

The designer’s visionary work looks as modern today as ever

If there is one jewelry trend I am certain will be huge in 2018, it’s empowering jewelry. The look got underway this summer with the release of Wonder Woman and the cuff revival. I sense it will become bigger as the women’s movement continues to gain momentum. It’s a trend forecast with historical precedent.

Statement jewels have consistently gone hand-in-hand with women’s movements. During the 1970s, designers like Elsa Peretti at Tiffany and Aldo Cipullo for Cartier specialized in major modern looks. Bold jewels were also a part of the Jazz Age when women were cutting their hair and enjoying new found political freedoms. (American women were granted the right to vote in 1920.) Jean Dunand was one designer who created strong pieces such as the Giraffe Necklaces made famous by Josephine Baker. Jean Fouquet was another one known for gutsy jewelry. 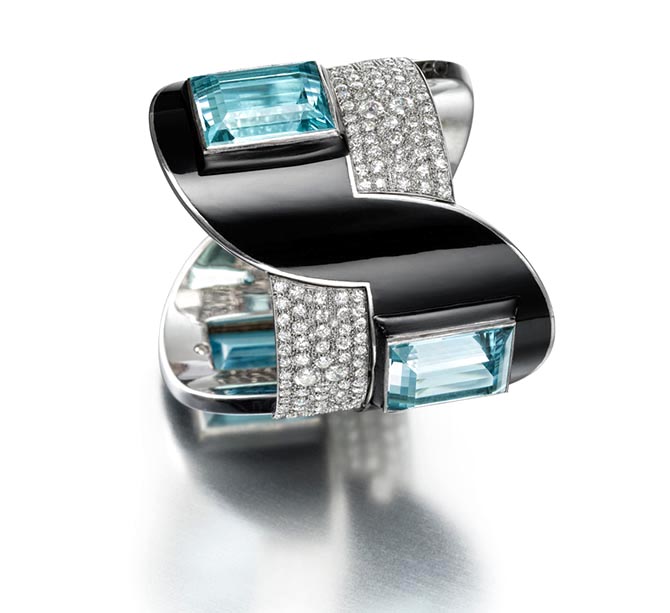 The designer, who worked for his father Georges Fouquet, created the incredible cuff illustrated here when he was 27-years old. The dynamic piece, that looks as though it could have been made today, was produced in 1926, one year after the Fouquet family’s triumph at the landmark 1925 Exposition des Arts Décoratifs et Industriels Modernes that launched the art deco movement.

Georges Fouquet was instrumental in shaping the art deco jewelry style. As president of the jewelry group at the 1925 Exposition, he worked behind-the-scenes prodding his colleagues to do something new and different. While today fashion and jewelry are sometimes dismissed as superficial, in the 1920s there was a belief among many that changing styles would help close the chapter on the atrocities of World War I. The forward looking French jewelers wanted something fresh and free of court references and old-fashion motifs like bows, flowers and swags. 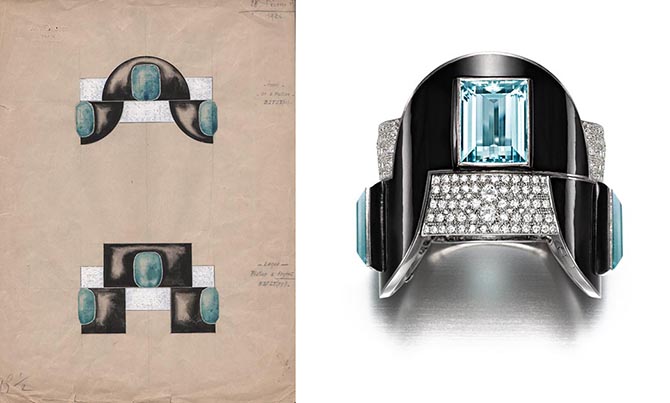 Two renditions of Jean Fouquet’s bracelet appear in his design at left of the jewel. Photo courtesy of Siegelson

Georges Fouquet wrote several articles and books on the subject of modern jewelry to make his beliefs clear. A passage from his publication La Bijouterie, la Joaillerie, la Bijouterie fantaisie au XXc Siècle is particularly interesting in relation to Jean Fouquet’s bracelet. (Keep in mind it was written at a time when semiprecious stones were plentifully available not the rarities many have become today.) Fouquet wrote, “The jewels most likely to endure are not ostentatious displays, but those in which the metal is associated with raw materials of a financial value less than their beauty, like aquamarine, amethyst, topaz, or tourmaline. Art, which never ages, will prolong the career of these jewels. It will endow them with their true character. They will never be disassembled so that the materials can be used in a different form. They are, first of all, works of art rather than financial investments.” 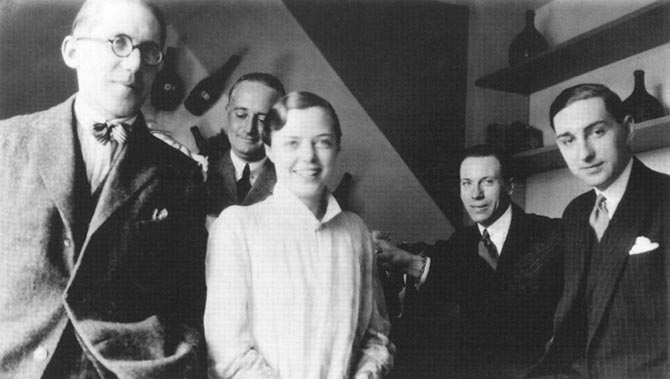 At the 1922 Salon D’Automme in Paris, a show staged by artists who were trying to break from the traditional academicism, the architect Le Corbusier, Percy Scholefield, Charlotte Perriand, George D. Bourgeois with jewelry designer Jean Fouquet. Photo via The Charnel-House

Jean Fouquet was as passionate as his father about the need for newness. He was a founding member of the Union des Artistes Modernes, a group who were committed to promoting modern art. He wrote about the subject for his close friend, the architect Le Corbusier, in his journal L’Esprit Nouveau.

It’s astonishing to review the thoughts of these design revolutionaries written almost 100-years ago. Some ideas are as relevant today as Jean Fouquet’s bracelet. I am particularly struck by Le Corbusier’s remark on history. He once said “To be modern is not a fashion, it is a state. It is necessary to understand history, and he who understands history knows how to find continuity between that which was, that which is, and that which will be.” As I was saying, there will be bold jewelry in the new year.