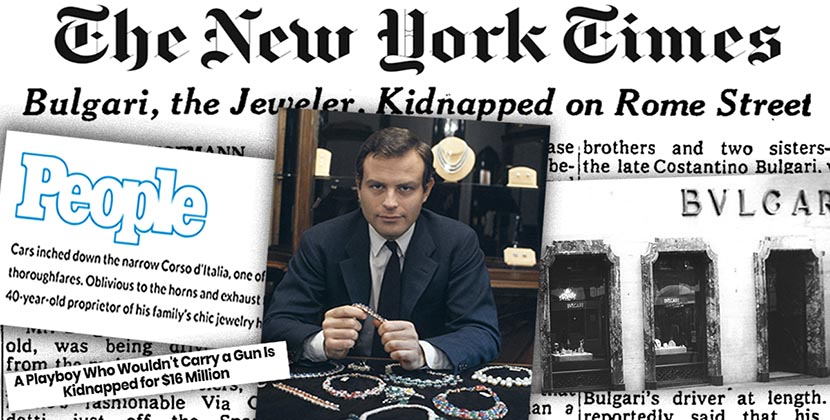 Collage of headlines, the exterior of the historic Bulgari flagship and Gianni Bulgari with jewelry in the boutique on the via Condotti in Rome. Photo Tony Vaccaro Studio, New York Times, People

Not long after John Paul Getty III went through the horrible ordeal of his 1973 kidnapping depicted in the 2017 film All The Money In The World, Gianni Bulgari was abducted in Rome. The press covered the case as intensely as Getty’s story. One of the main differences between the two narratives was that the young Getty’s character was considered questionable, even by his own grandfather, whereas the 40-year old Bulgari was a visionary jeweler and a dazzling member of jet-set society. 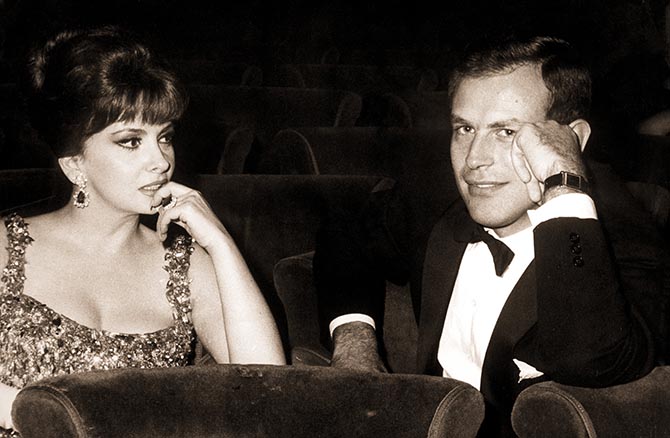 Gina Lollabridgida and Gianni Bulgari out together in the 1960s. Photo Farabola

One of the most eligible bachelors in Rome or anywhere, Town & Country magazine described the over six-foot tall, blonde, blue-eyed Italian as an “Adonis.”  The Eternal City’s famous paparazzi photographed him out with Italian film star Gina Lollobridgida. He dated American actress Jill St. John and was rumored to have had an affair with Oscar-winner Faye Dunaway. Dashing as could be, Gianni landed on the Best Dressed List in 1970 along with the skier Jean-Claude Killy and banker Baron Eric de Rothschild. 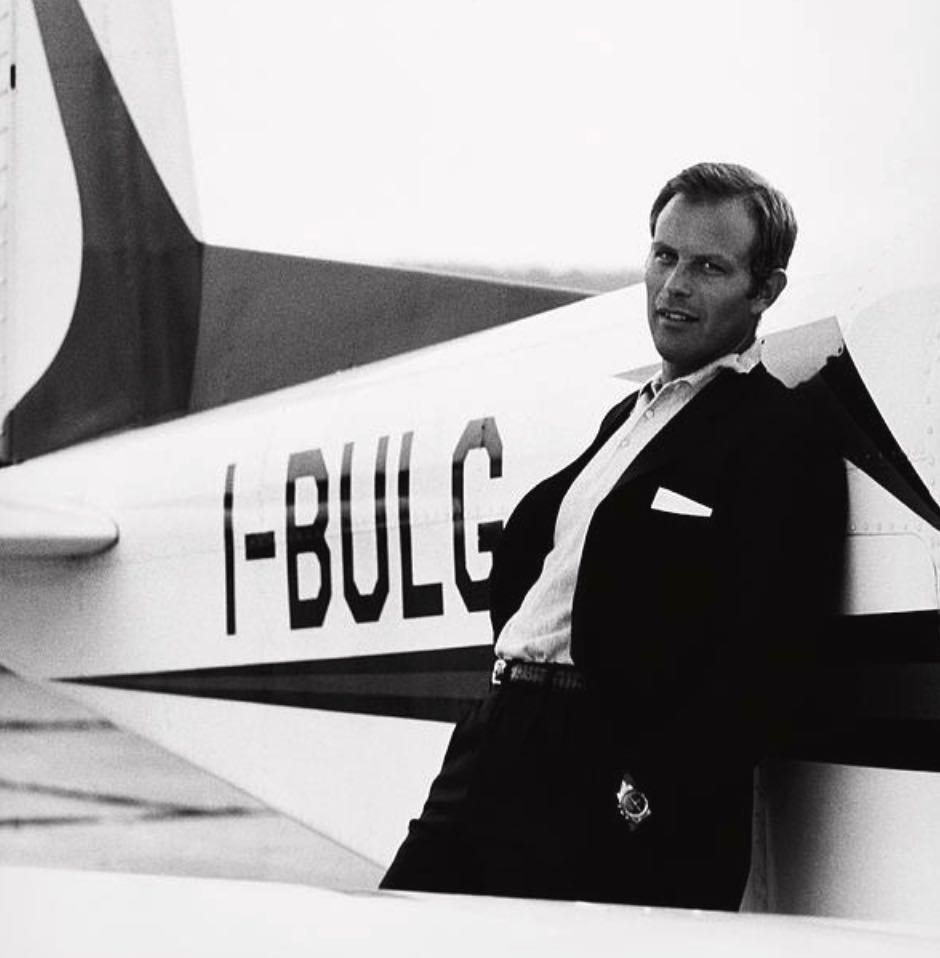 Gianni Bulgari posed in front of his plane for the June 1, 1969 issue of Vogue. Photo via Condé Nast

Gianni’s hobbies were as glamorous as his profession. The jeweler flew his own glider plane from Rome to his summer home in Sardinia where he enjoyed skin diving. He learned how to race sports cars from master Enzo Ferrari. Then he drove a Ferrari Targa Florio 250 GTO in several races where he placed at or near first. In the 1963 Targa Florio Circuit in Sicily he won his class. He also had success driving a Porsche 904 in European events.

Gianni Bulgari became an expert in precious stones as a teenager, traveling with his father Giorgio on buying trips during breaks from studying philosophy and law at the University of Rome. Upon occasion he was spotted at high-profile auctions in New York City bidding on rare gems.

Important clients enjoyed buying from Gianni. When Elizabeth Taylor and Richard Burton went on their celebrated shopping sprees, while they were falling in love on the Rome set of Cleopatra in 1962, they worked with Gianni in the private area of the via Condotti boutique Taylor dubbed “the money room.” 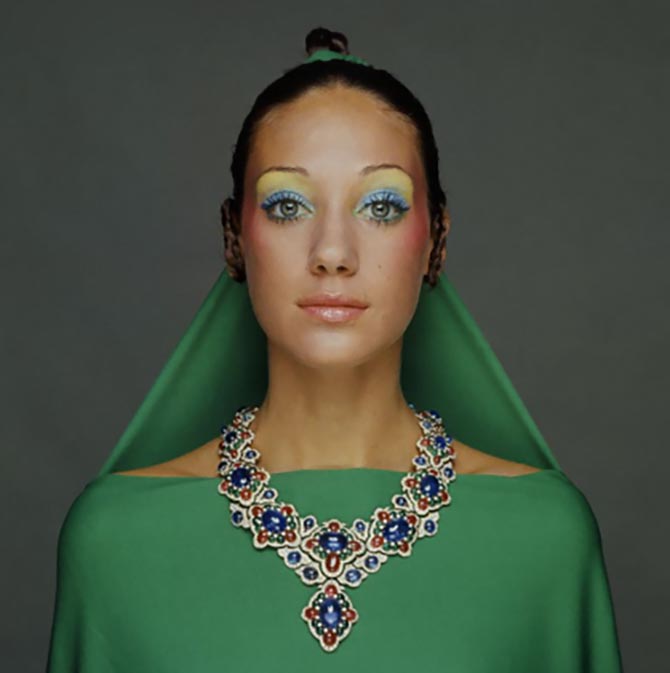 By the mid-1960s, when Gianni took the helm of the family business and began running it with his brothers Palo and Nicola, his name was well-known among society. On March 14, 1975, Gianni Bulgari’s name became known everywhere in international headlines after three armed thugs, believed to be part of the mafia, kidnapped the Bulgari heir by hijacking his chauffeured limousine in Rome. It was most likely the same group that were part of the rash of kidnappings including J. Paul Getty III. While many well-heeled Romans had started carrying handguns and traveling with bodyguards after the Getty situation, Gianni had refused saying “I cannot live that way.”

The day of the abduction police shut all roads exiting Rome in an effort to catch the kidnappers. Every jewelry store on the via Condotti remained closed the following day in an expression of solidarity with the Bulgari family. When I asked Gianni about the incident, he said “I was kept in a box and I had to stay there for 30 days waiting for my brothers to try to get me out. It was actually quite a lesson of life, because you can accommodate to things that you think ‘this is impossible to live like this,’ but then I got ahold of myself and I would think there is nothing I can do, I just have to wait.” 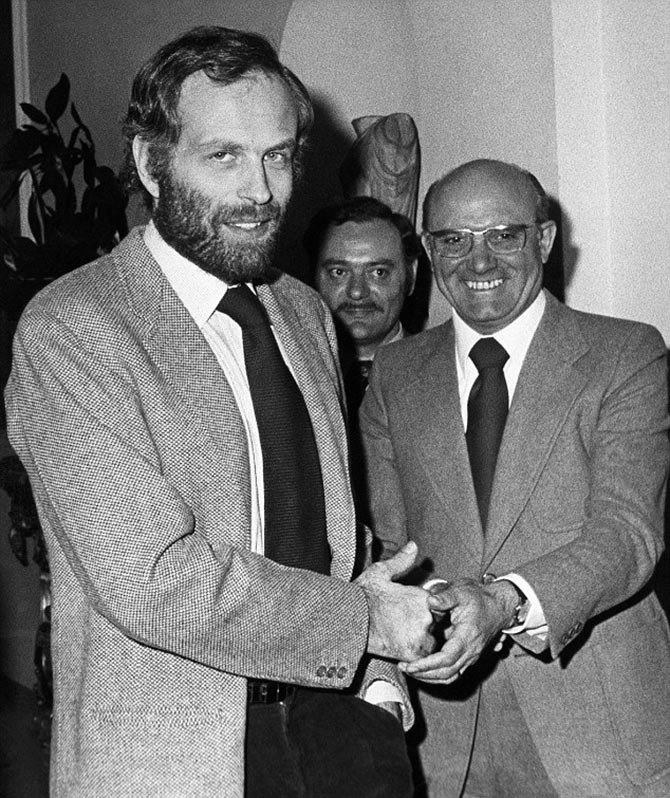 Gianni Bulgari a few hours after being released from his captors on April 14, 1975. Photo AP

For one tense month reports in newspapers, weekly magazines and television news broadcasts from Italy to the United States followed the case. Finally, on April 15, 1975, Paolo and Nicola Bulgari negotiated a $2 million ransom for Gianni’s release. The pictures taken the day he was freed, show how the jeweler lost weight and grew a beard over his month-long ordeal.

Unlike John Paul Getty III who never recovered from the trauma of his experience, Bulgari says, “I became more determined to pursue my goals.” He immediately returned to work and delivered the astounding Bulgari Roma digital watch the same year. The watershed timepiece marked the beginning of a new era in watches that transformed the Italian firm’s business and still has impact on it to this day. 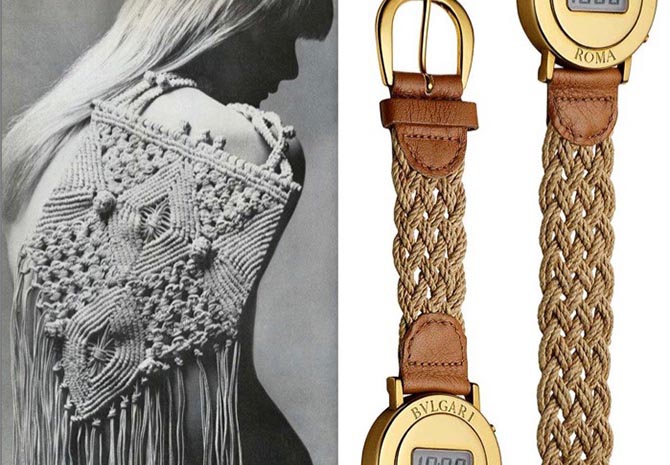 Pomellato Brings Back A 1970s Classic