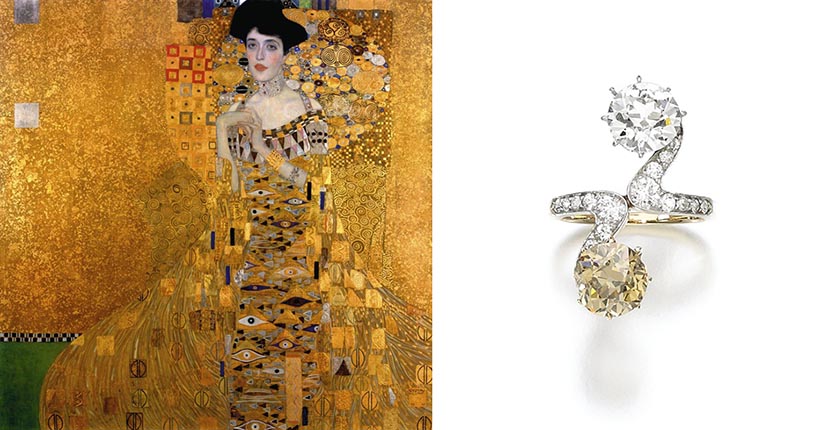 The Bloch-Bauer jewel was sold at Sotheby’s in London

It’s the simple swirl of the line that makes the ring lyrical. When you read the provenance in the Sotheby’s London listing for the sale of the jewel that took place on December 11, 2018,  “Adele Bloch-Bauer and thence by family descent,” the swoosh of stones becomes transporting. The design detail linking the two diamonds perfectly expresses the style of those glorious days of fin de siècle Vienna. The period when Gustav Klimt took around four years from 1903 to 1907 to paint The Portrait of Adele Bloch-Bauer I, the masterpiece also known as The Woman in Gold. 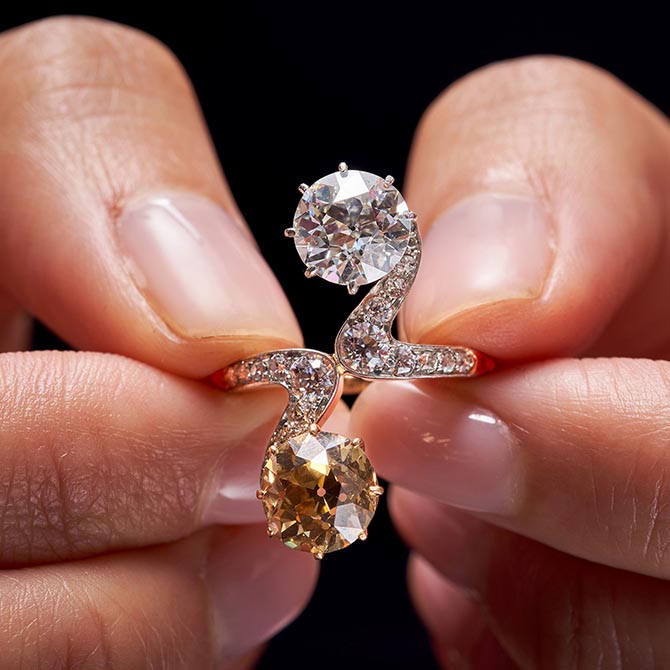 Who made the ring? It’s not signed, so the facts can’t be confirmed. I suspect Adele’s husband Ferdinand Bloch-Bauer purchased the jewel from a fashionable Viennese house located somewhere around the grand Ringstrasse in the Old City. The ‘moi et toi’ design is artistically set with a 2.19-carat tinted brown diamond for a touch of color and a 1.85-carat near colorless white diamond. The diamonds accenting the line come in a range of sizes to fill it in perfectly.

While the diamond jewel was not among the several gorgeous pieces Adele wore for her sittings with Klimt, one could easily imagine the socialite wearing the piece while she hosted parties at her lavish apartment in Vienna. After Adele died in 1925 at age 43 from meningitis, her husband gave the ring as a wedding present to his great-niece, Helen Marie Stutzova. She passed it on to her daughter Charlotte Mayer who became a sculptor in London where she immigrated in 1939 after escaping the Nazis. In other words, the ring was saved from the Gestapo who seized so much of the illustrious Jewish family’s property during World War II. 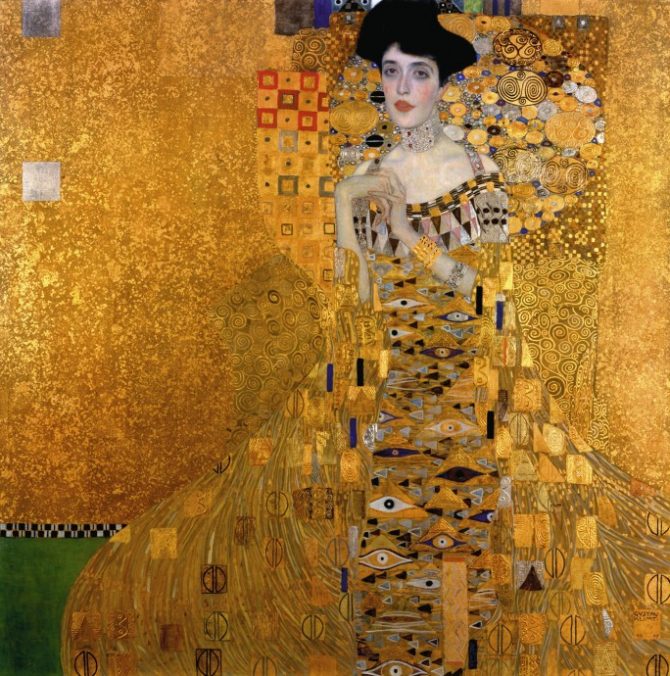 When the jewel went on the auction block at Sotheby’s yesterday it had an estimate of 5,000 to 7,000 Pounds that’s around $6,300 to $8,830. To the surprise of no one, the piece went for much more. It was sold for $55,186. The buyer has not been revealed. I was kind of hoping the purchaser would be Ronald Lauder. He bought The Portrait of Adele Bloch-Bauer I for his Neue Gallery: Museum for German and Austrian Art in New York from the family’s descendants who worked for years to recover the art from the Austrian government. It’s still possible he did buy it. Sometimes purchasers are not revealed for years after a sale.

The MET’s Jewelry Exhibit Is A Smorgasbord