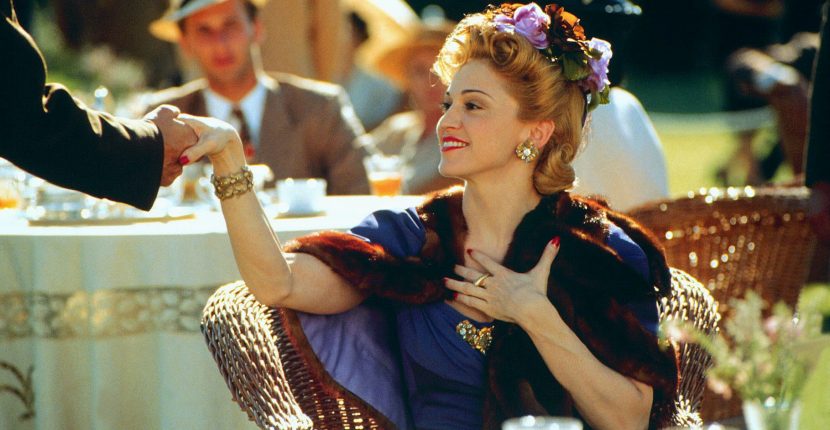 The 1990s was not exactly a great period for jewelry. Minimalism was the order of the day. There was barely a diamond on the red carpet. I know because I covered jewelry for InStyle magazine along with my colleague and co-author Penny Proddow. At the time diamond studs were actually (and seriously) newsworthy. Diamond solitaire necklaces were a trend we covered with enthusiasm. I smile when people scoff at these looks today. They don’t know how good they have it, but I digress.

During the 1990s, Bulgari was one jeweler trying their level best to buck the minimalist trend. The most high-profile way they worked some jewelry magic was in the movies. Bulgari was involved with several fabulous films during the decade. The Italian jeweler’s pieces were most famously placed in Casino, but they also appeared in several other amazing films.

Following are the mini jewelry movie reviews for the best Bulgari moments in 90s movies. Add all of them to your quarantine streaming list. 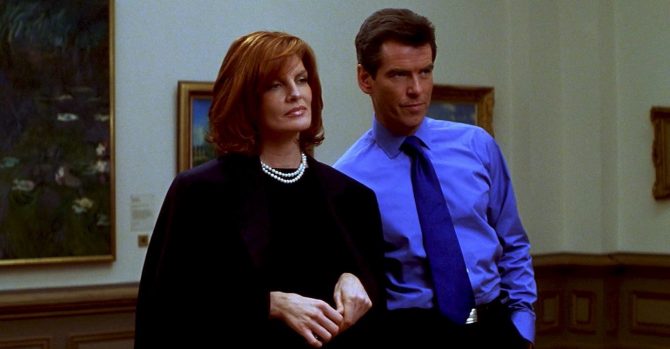 A seriously sexy art caper, The Thomas Crown Affair takes place in New York City and stars Pierce Brosnan as a financier and art thief and Rene Russo as an uber chic insurance investigator. The 1990s was an era when watches were still very much in vogue and it is worth noting Bronsnan wears a beauty. His Jaeger-LeCoultre Reverso gets a couple of closeups in the film. He even flips the case once near the end.

Russo’s outfits in the movie by and large came from the Celine collection Michael Kors designed in 1997. There were also a few pieces by Halston including a black dress she wears to the black and white charity ball. At the event, the band plays behind stands that say “Bvlgari Supports AIDS Research” and model Esther Cañadas who has a small but significant role wears a glamorous Bulgari diamond necklace and earrings. In the same scene Russo has on diamond cluster earrings by Bulgari.

Later in the movie, Bronsnan gives Russo a choker necklace and serves the line “You are not going to say I couldn’t possibly.” The sassy investigator who is draped in layers of pearls says “No, I wouldn’t say anything that boring.” 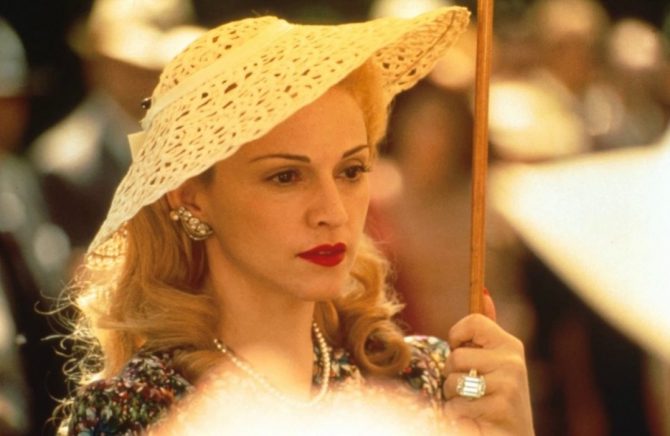 Madonna changed outfits around 85 times in the epic musical bio pic Evita. Many of the costumes reflected the First Lady of Argentina’s passion for fashion. The Material Girl also reportedly wore 56 different pairs of earrings as she belted out Andrew Lloyd Weber’s songs. It was a lot of mid-century style jewelry. Some of the pieces were costume and made for the production or sourced. The English jeweler Asprey provided a few fine jewels for the movie, but Bulgari sent in the lion’s share of vintage. The showstopper is a Bulgari diamond flower brooch, an exact replica of one Evita owned.  The Italian firm made the piece from a design in their archive. The jeweler also outfitted Madonna for all the international premieres and became closely associated with the production. 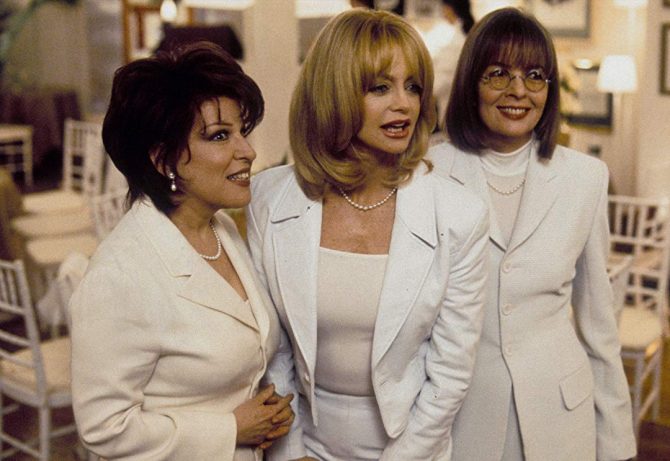 News was recently released that the comedic trio who starred in First Wives Club, Goldie Hawn, Diane Keaton and Bette Midler, will be reunited in a new production titled Family Jewels. This speaks volumes about how memorable they were in the 24-year old movie. Jewelry bookends the revenge story. In the first scene when they graduate from college all three ladies receive a strand of pearls that they open from Bulgari boxes. (Bulgari was very good about getting their name and logo in movies.) They put the jewels on once again for the rousing finale of the film when the stars sing “You Don’t Own Me.” 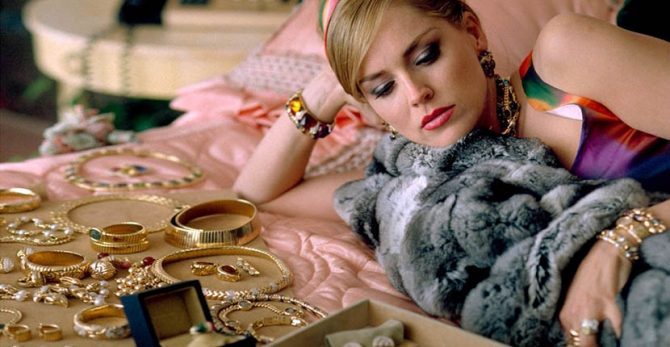 Sharon Stone and her bed full of Bulgari bling in ‘Casino.’ Photo

Bulgari hit the jackpot of jewels on screen in Martin Scorsese’s Casino. Never before or since has there been quite so much fine jewelry shown in one scene than in the gangster drama. The moment goes down when smitten casino king pin Sam “Ace” Rothstein (Robert De Niro) presents his bride, hustler Ginger McKenna (Sharon Stone), with a trunk sized box filled with Bulgari jewels. While the couple cuddles on their big bed surrounded by diamonds, gold and all kinds of semiprecious stone pieces from the famed Italian jeweler, Stone coyly asks “Do you think it is too much if I wear these all on the same day?”

While the film is set in the 1970s, the jewels are straight out of the 1990s. I suspect contemporary designs had to be use because of the quantity needed to make a visual impact. At the time the production was filmed Bulgari barely if even had an active archive department.

Find out more about what’s wrong with the bed full of bling and the other Bulgari jewels Stone wore in the production in here. 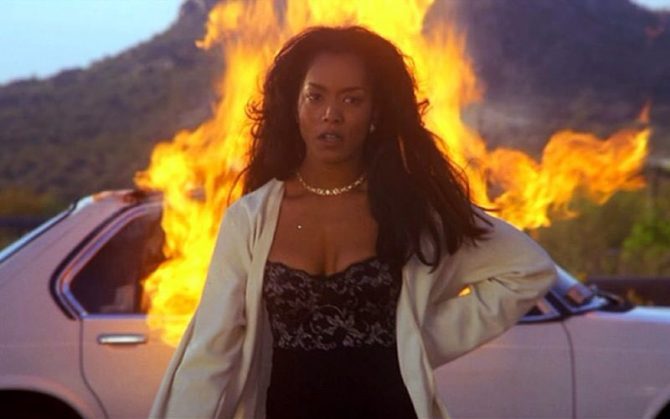 This mid-1990s dramedy revolvees around the lives and relationships of four African American women played by Whitney Houston, Angela Bassett, Loretta Devine and Lela Rochon. Throughout the story adapted from the best-seller by Terry McMillan and based in Phoenix, Arizona, the women are dressed in contemporary ensembles reflecting their upper middle-class lifestyles. There are all kinds of everyday costume jewels in the production to accessorize the clothes. A few fine pieces in their collections come from Bulgari. In the iconic moment in the film, when Angela Bassett sets her husband’s car on fire, a Bulgari choker necklace lights up her perfect meltdown look.

A couple of Bulgari watches appear in Michael Mann’s moody crime drama Heat starring Robert DeNiro, Al Pacino and Val Kilmer. Pacino wears a Bulgari Diagono with the Bulgari-Bulgari name clearly engraved twice around the bezel. Kilmer also wears a Bulgari watch in the movie. I remember when it was released, Penny and I thought it was kind of amusing that the detective (Pacino) and the thief (Kilmer) both liked the brand. In retrospect, however, it makes much more sense. Bulgari was one of the hottest jewelers of the 1990s.

A Look At The Sparkle in ‘Marie Antoinette’