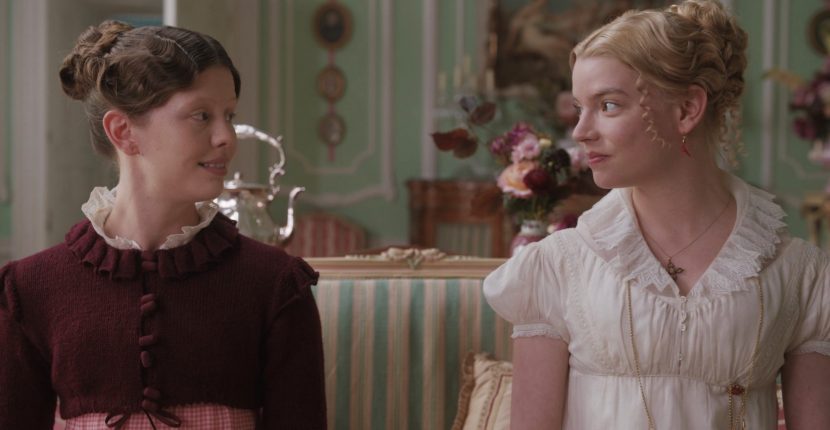 When Emma starring Anya Taylor-Joy was released in February, I have to admit I was a bit skeptical about how it might stack up next to the delightful 1996 rendition starring Gwyneth Paltrow. The Goop lifestyle guru was at the peak of her acting career when she made it and it had a delightful supporting cast.

Well, I missed the new Emma while it was in theaters and now I’m glad I did because it has been made available on Amazon to stream. To paraphrase Jane Austen it is excessively diverting. Variety described it as a “medicinal balm for anxiety” in an interview with the director by Autumn de Wilde.

Above and beyond the timeless Austen text, which let’s not forget transformed so seamlessly into Clueless, the cast is as fabulous as the last rendition of Emma. Johnny Flynn is a dreamy Mr. Knightley. Bill Nighy is delightful as Emma’s father Mr. Woodhouse. Josh O’Conner (last seen in The Crown as Prince Charles) makes a divine Mr. Elton. And Mia Goth is perfect as Harriet Smith.

The sets and costumes are a delicious confection. There are extraordinary houses, astonishing hats, beautiful dresses and lots of romantic period jewelry. Just about everything is awash in a pastel palette inspired by hues from the Regency period. So the shades are essentially historically correct, but they also feel like a soothing au courant millennial color scheme. Every frame is impeccably situated, almost as though it was set up for social media. 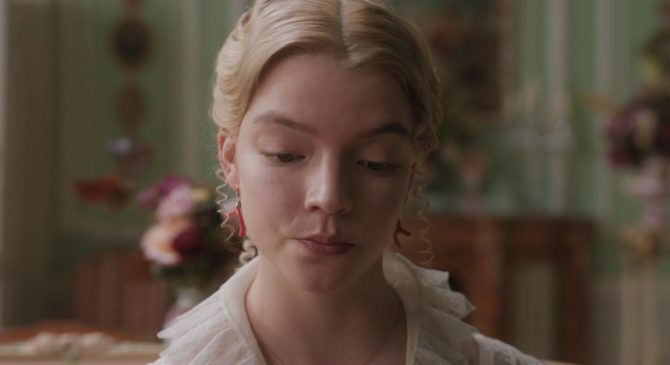 In respect to the jewelry, this Emma is far superior to the 1996 version. Paltrow’s jewels were paltry by comparison and a reflection of the minimalist 1990s aesthetic. Taylor-Joy’s Emma has lots of treasures in her jewelry box and she styles her pieces in different ways throughout the movie.

Judging by the jewels in the film, her favorite gem is coral. One of the chicest looks in the movie happens early in a scene when our heroine wears branch coral earrings. She combines the jewels with her favorite cross necklace and a long gold chain draped across the front of her gown and attached to a coral cluster brooch (seen in the photo at top). 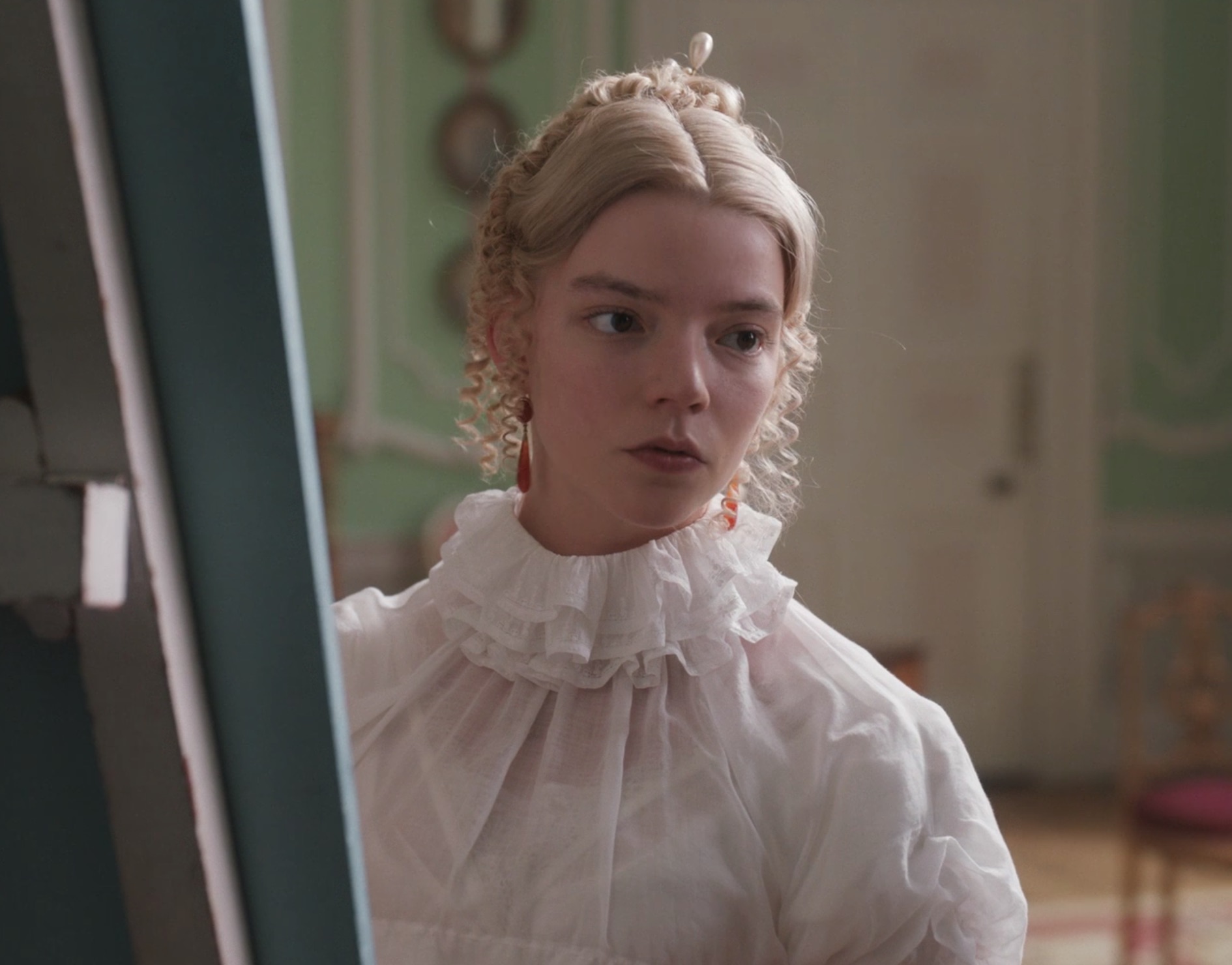 When Emma is painting a portrait of Harriet Smith, she does not go jewel-less while she works. To the contrary, she wears stunning long pendant earrings. They are in the coral family of colors, but I believe the gem in the jewels is carnelian. She also has a pearl hairpin poking out of the top of her up-do. 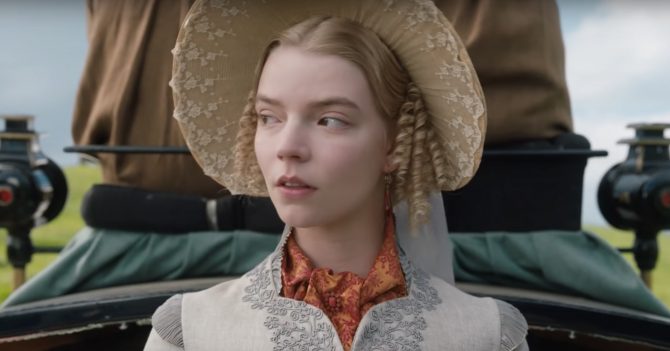 For a carriage ride during the day, Emma wears the coral cluster brooch she used to anchor her gold chain at her neckline. She pairs the piece with drop pendant earrings that look as though they could be amber. 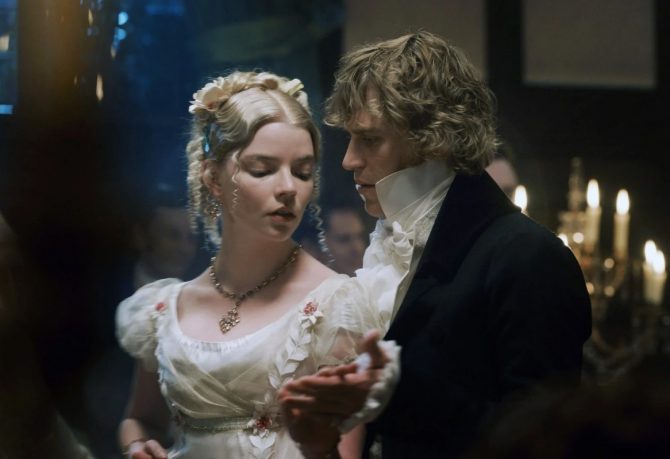 For a dance in the evening when Emma takes a twirl Mr. Knightley, she wears a necklace that reminds me of Larkspur & Hawk’s foiled jewelry collection that’s inspired by the foiled jewelry of the Georgian era. 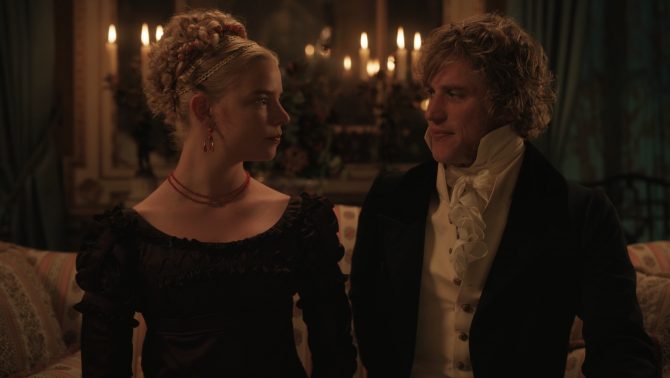 If you just look at the jewelry in this scene you can tell it’s an important moment with Mr. Knightley. Emma is wearing several pieces of her beloved coral jewelry including a hair comb, necklace and pendant earrings. 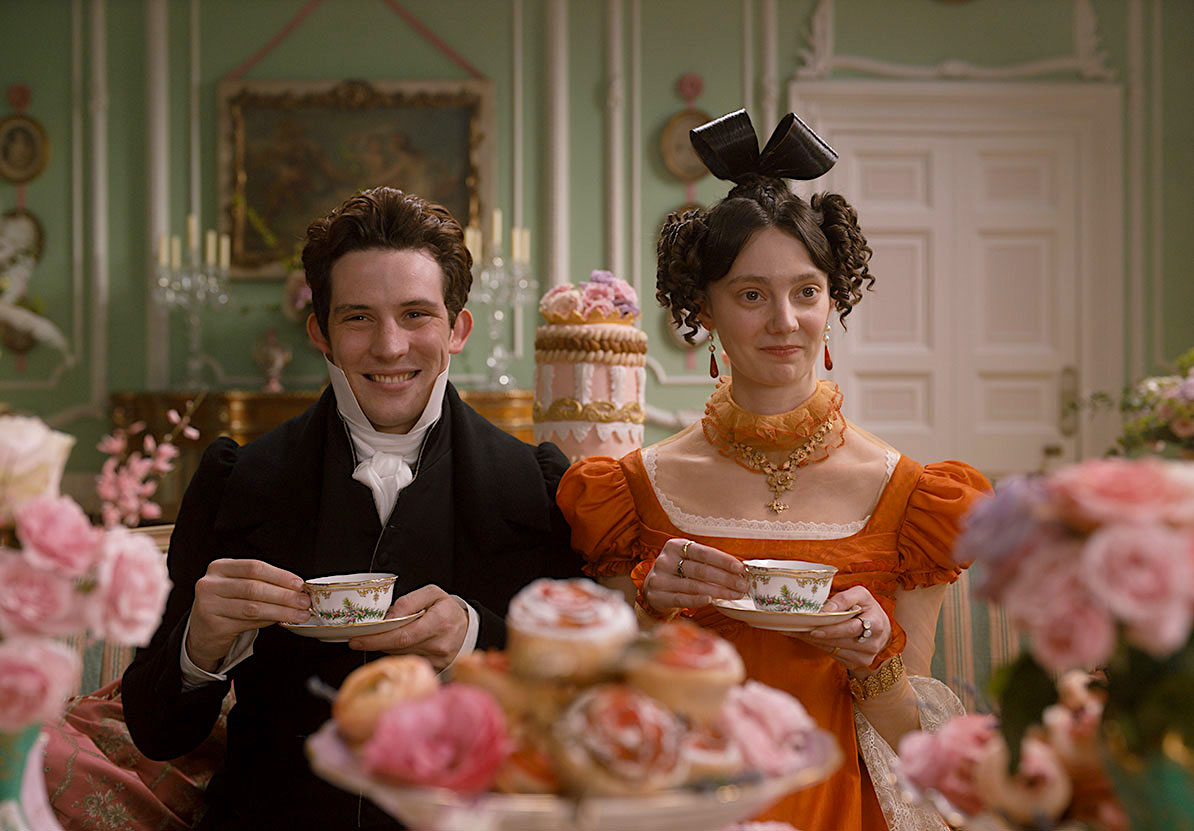 The jewelry in Emma is not limited to the leading actress. Several other characters including the obnoxious Mrs. Elton (Tanya Reynolds see in the photo above) are beautifully bejeweled.

If you are wondering, as I am, where all these treasures came from I have been unable to uncover the source the brilliant costume designer, Alexandra Byrne, used. If you know, or if it’s you, please contact me at hello@theadventurine.com. And if you are a jewelry lover, definitely treat yourself to an at home screening of Emma.

A Look At The Sparkle in ‘Marie Antoinette’

Helena Bonham Carter Wears Her Own Jewels in ‘The Crown’