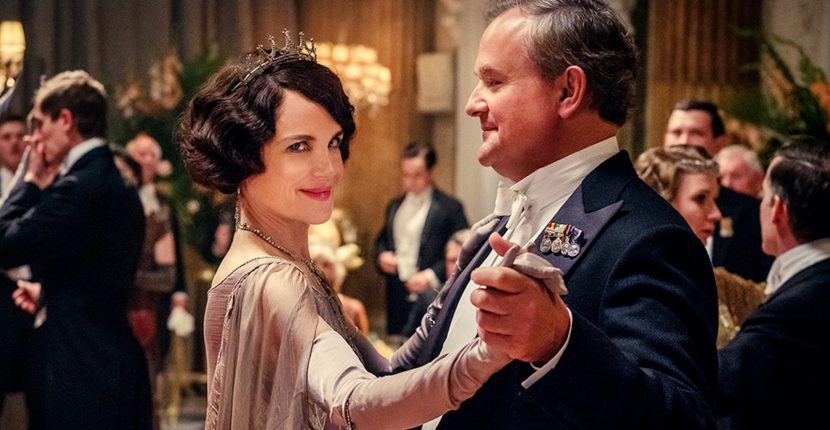 In the final scene of ‘Downton Abbey,’ Hugh Bonneville dances with Elizabeth McGovern who is wearing and Edwardian diamond tiara from Bentley & Skinner. Photo Focus Features

Our special correspondent reviews the real jewelry treasures in the film

Downton Abbey is back! Soothing as a hot cup of tea, bracing as a brisk walk with the dog and as satisfying as a well-delivered drawing room put down. At last on the big screen, four years after the conclusion of six seasons of television, how does it translate? Does it shine under the blinding spotlight or does its fusty public television provenance peek through? Fear not! It makes the leap flawlessly, upholstered with a meaningful budget upgrade. Everything has been kicked up a notch. The familiar theme music is grander, the opening credits literally sparkle over new high-tech drone shots of Downton and, best of all, the jewelry is epic.

Set in 1927, the film opens with news that Downton will soon receive a royal visit by King George V and Queen Mary. The preparations involved for this grand occasion launch the story and we are reunited with the Crawley family and their staff.  Swirling beneath the drama of the royal visit are many smaller subplots ranging from assassination to silver polishing to, literally, groceries. Thankfully the film dispatches them all within two hours instead of an eight-episode season. 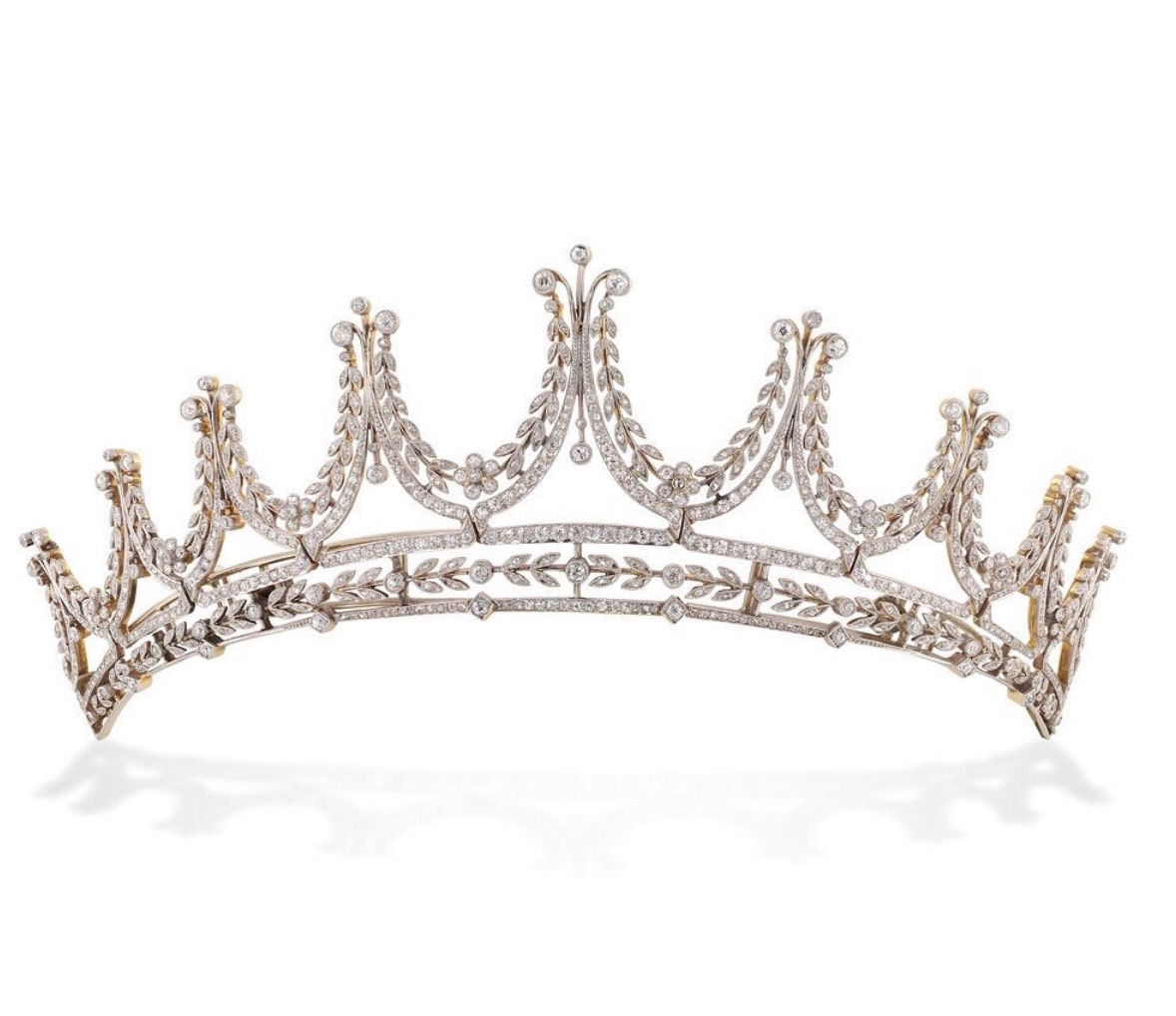 Lucky for us, several costume changes are involved, progressing from a simple tea and a military parade, to formal dinner and culminating in a glittering ball. And this, dear readers, is where jewelry comes in. Royal etiquette dictates that only married women may wear tiaras, meaning the now happily-married Crawley sisters can join their mother and grandmother in delighting your jewelry-loving soul with tiaras of joy.

Rendered in a mix of vintage finds and costume recreations, Downton Abbey features a breadth and richness of jewelry styles appropriate to the period. Faster than any dialogue, jewelry instantly conveys the characters’ status and standing. The Crawley women wear Victorian, Edwardian and Art Deco pieces. New and inherited. Real and costume. All mixed, layered, worn together. Consistent across the three generations: dangling statement earrings and long necklaces. For the big dinner and grand ball that concludes the royal visit and the film, each central character wears a tiara that reflects her personality, style and of course, status. 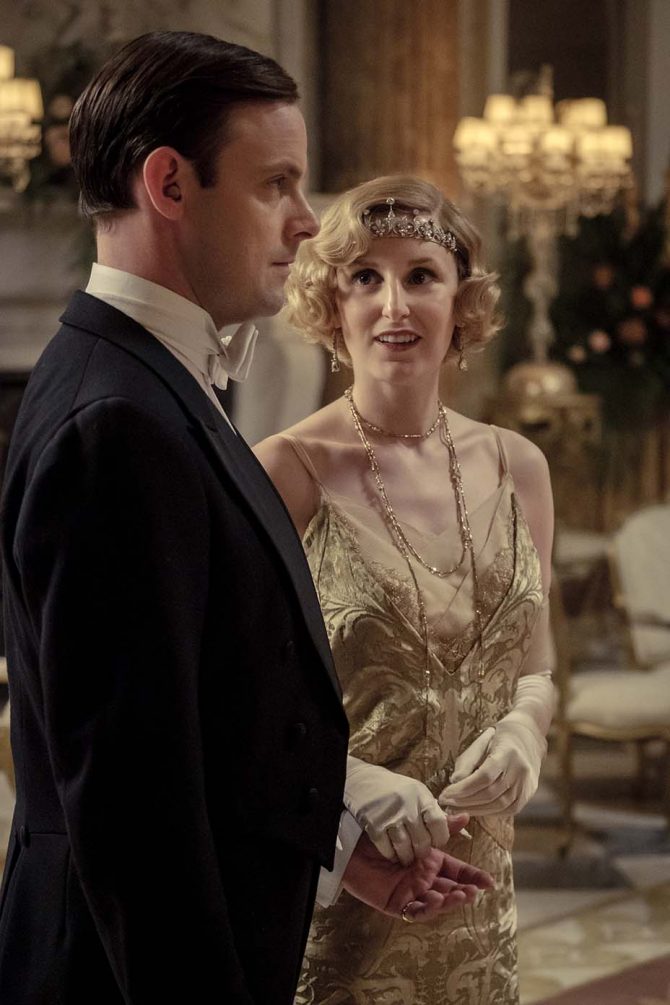 Youngest surviving Crawley daughter, Lady Edith (played by Laura Carmichael), highest ranking as Lady Hexham, wears elegant Victorian diamond foliage tiara from Bentley & Skinner. She positions it on her forehead in the mode of Art Deco flappers. The piece is far more sumptuous than the sensible pearls she often wore on the series in her prior role as a modern working woman. She also has on Art Deco style earrings and loads of long chains. 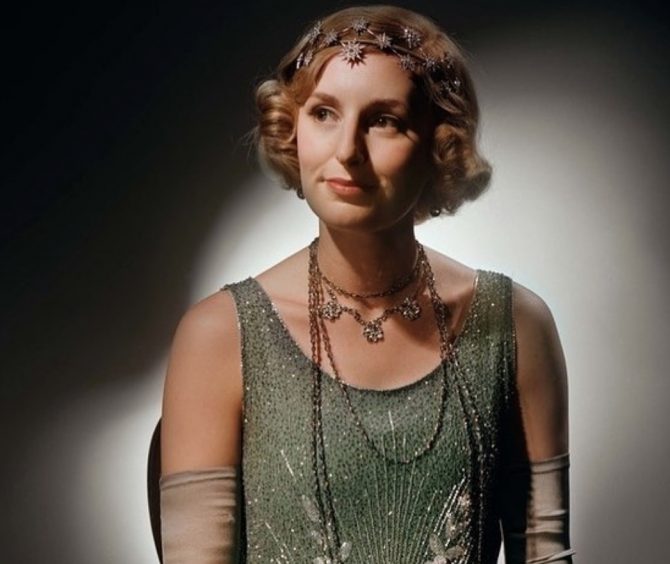 In the finale Lady Edith wears layers of long necklaces with a dazzling piece of headgear featuring an array of starbursts across her brow. The costume jewel was made by Andrew T. Prince. 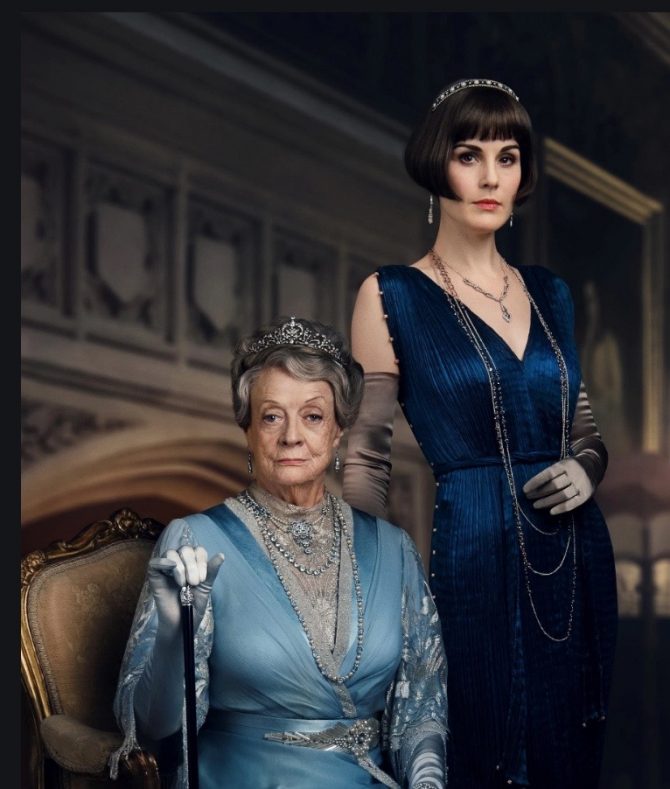 The eternally elegant Lady Mary (Michelle Dockery), now settled into her own career running Downton, is thoroughly accessorized for every occasion, with many layers of coordinating beads and bracelets, her bob crowned with a costume headband style bandeau made by Andrew T. Prince for the film. 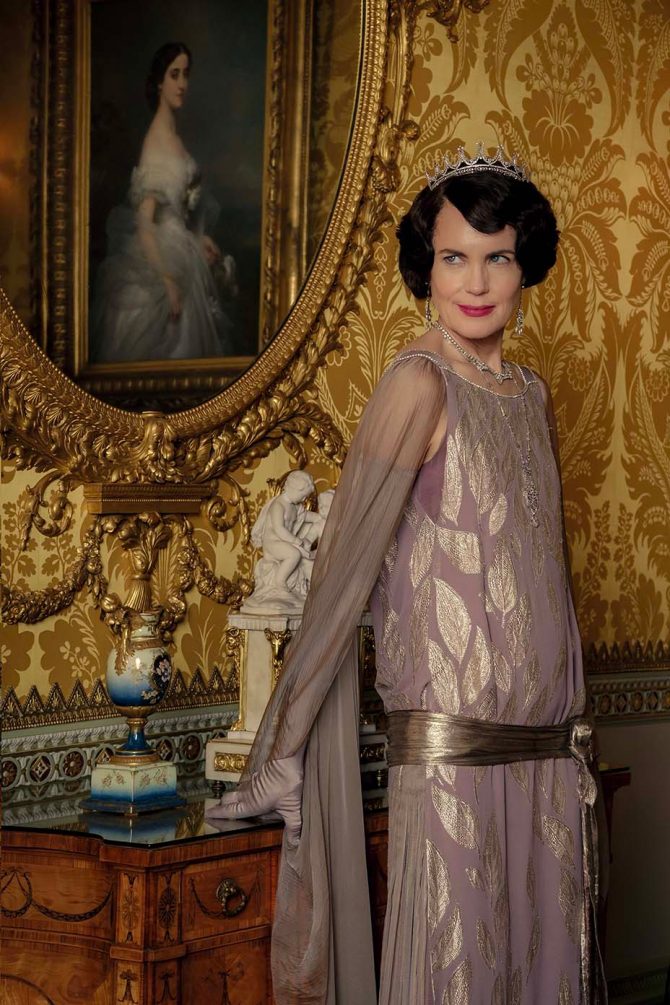 Lady Cora, Countess of Grantham (Elizabeth McGovern), is her typical comforting and useful self, while sporting delicate Edwardian filigree that sits high atop her head during the final formal ball scene. The Edwardian jewel comes from Bentley & Skinner. 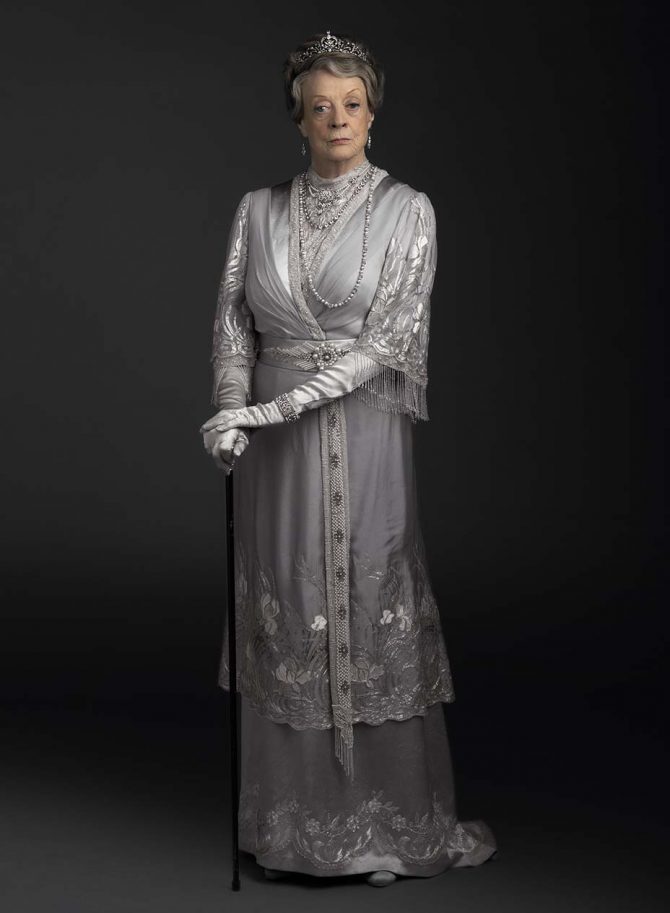 And, importantly, the indispensable Dowager Countess (Maggie Smith) returns to quip, scheme and wears, well, everything including a Victorian diamond set tiara from Bentley & Skinner. 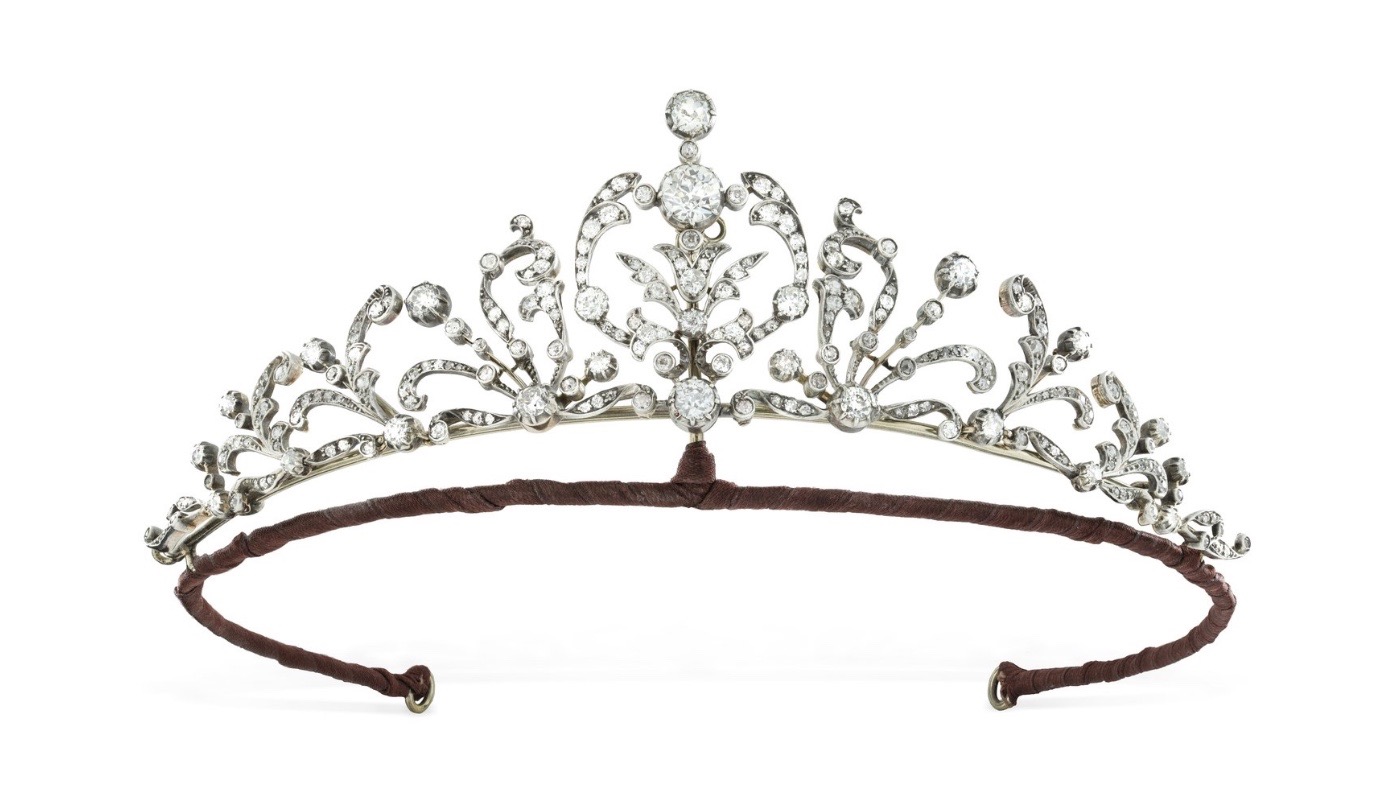 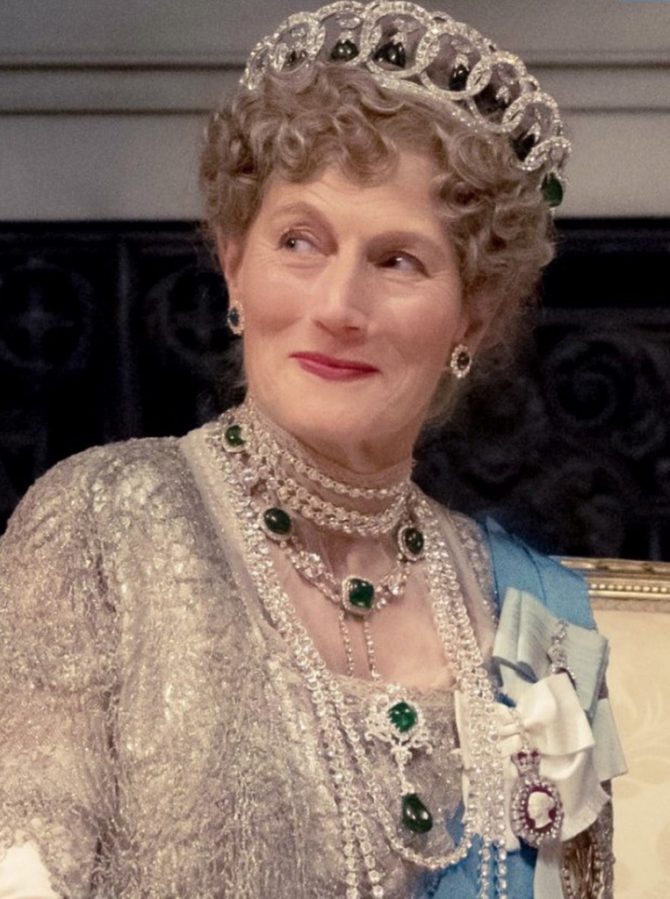 Fittingly, Downton Abbey pulls out all of the jewelry stops for its fictional Queen Mary (played by Geraldine James). She wears a faithful reproduction of the famous diamond Vladimir tiara (reportedly Elizabeth II’s favorite), together with the legendary Cambridge emeralds and the Delhi Durbar necklace and suite. According to Town & Country, costume designer Anna Robbins put the array together with the model maker Martin Adams. The top of the jewelry food chain, it is a glorious display of jewelry dominance and a fitting, glittering exclamation point to the end of the story so far.

Is this our last visit to Downton? It was presented as such, but the big opening box office weekend may point another direction. If so, we’ll be back to see what the tiaras tells us next time.

What’s Wrong With The Bed Full of Bling in Casino?

All The Tiffany Jewelry Audrey Wears in Breakfast At Tiffany’s