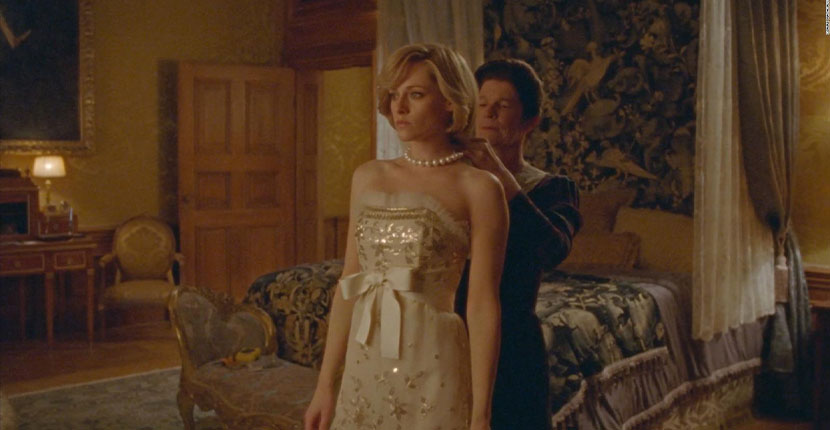 Diana’s Pearls Are a Major Part Of ‘Spencer’

Kristen Stewart works them every which way

November 6, 2021—Princess Diana loved pearls. From the moment she married Prince Charles at age 20 in 1981, pearls became a signature part of her style. She wore the marine gem in all kinds of jewels from the Queen’s historic Cambridge Lover’s Knot tiara to contemporary diamond and pearl pendant earrings, multi-strand pearl chokers and large pearl button earrings. Diana even had costume pearl jewels. Her Venus Pearl Drop earrings from the Metropolitan Museum of Art are still sold by the institution.

Spencer plays up Diana’s love for jewelry and pearls in particular.

The jewels are part glamour and part of the fever dream-like experience Diana is having throughout the timeframe of the film. It’s set during a fictionalized three-day get together at Sandringham House from Christmas Eve to Boxing Day in 1991. The year the movie takes place is significant. In real life the marriage of Diana and Charles was breaking down. They officially separated in 1992 and finally divorced in 1996.

All the familiar faces from the British Royal Family are present in Spencer, but they don’t get much screen time. This is not The Crown. The plot is fully focused on Diana. The tone of the film will be familiar to fans of Jackie (2016) starring Natalie Portman. Both films were made by director Pablo Larraín.

Kristen Stewart plays Princess Diana and is garnering a lot of Oscar buzz. While she doesn’t exactly look like Diana, she does embody her mannerisms and physicality. Her costumes also help capture the general spirit of Diana’s early ‘90s style.

In the first scene when Diana is driving herself in a convertible sports car, she pairs a plaid jacket with a white silk blouse, large pearl and pavé-set diamond button earrings as well as her sapphire and diamond engagement ring and a slender gold wedding band.

The engagement ring comes from Mouawad, the fine jewelry partner of the movie. The ring doesn’t look much like Diana’s ring besides the fact that it has an oval shaped sapphire, but the exact style doesn’t really seem to be the point here. It’s a mood.

I will, however, outline some differences. The Mouawad ring which is set with a 7.25-carat sapphire has a modern diamond halo mounting and a diamond-set triple split shank. Diana’s actual ring has a sapphire surrounded by largish round diamonds set on a gold band. The carat weight of Diana’s ring, which is currently worn by Kate Middleton, has never been revealed.

In the movie, as in real life, the engagement ring is paired with a slender gold wedding band. The royal family’s wedding bands have been made with Welsh gold since 1911. Although the mine in North Wales is no longer operational the tradition continues with recycled or stocked Welsh gold.

Jewelry comes up in the dialogue as soon as Diana arrives at Sandringham. The first thing she is asked to do is a factual tradition of the household. Each guest is weighed when they arrive and again when they leave on an antique kitchen scale. The reasoning is called “a bit of fun,” as the host, in this case Queen Elizabeth, wants to make sure the guests have been well fed and put on weight during their stay.

Diana in the movie (and most likely in real life) hated it because she was suffering from bulimia. In the film she jokingly says, “Half my weight is jewelry.”

She isn’t wearing a lot of jewelry when she arrives in her driving outfit, but the statement alludes to her love of jewels and things to come in the movie. It is worth noting she has gold bracelets on both wrists which is an accurate everyday Diana jewelry look.

Warning: There are plot spoilers below.

Diana is not in a good mood or stable state of mind when she arrives at Sandringham. Things spiral down further after she opens her present from Charles on Christmas Eve. He has given her a strand of large, most likely South Sea pearls. Diana is distraught because she has seen a picture of Camilla Parker Bowles wearing the same necklace.

The main strand Diana wears in the movie is from Mouawad. It has 1.31-carats of diamonds set in the white gold ball clasp which receives a few pans from the camera. Clearly there were costume backups. In Diana’s hazier moments she rips it off and breaks it. She even eats the pearls. But then the necklace is worn again and again. It is agony every time.

The pearls also relate to the hallucinations she is having of Ann Boylen after reading the book, Ann Boylen: Life and Death of a Martyr that someone left on her bedside table. The ill-fated second wife of Henry VIII is also decked out in pearls. Diana is in such a paranoid state she feels like she might be killed like Ann in order to get her out of the way so Charles can be with Camilla.

In terms of comparing the style of the large strand of pearls to Diana’s real-life collection, Diana did have a large pearl choker but not quite as big as the one in the movie during the early 1990s. She wore one around the same size later in the decade. Yet it’s easy to understand why the filmmakers wanted to use a huge one. It works dramatically when Diana rips it off and chows down on the pearls.

Other jewels that appear in the movie include a couple Mouawad pavé-set diamond knot and pearl pendant earrings Diana wears with the big pearl necklace and a Chanel strapless gown for Christmas dinner. A Mouawad timepiece set with 21.55 carats of diamonds flashes on her wrist at one point. There is also a diamond bracelet that gets some closeups during an intense moment.

Queen Elizabeth is given the grandest Mouawad diamond jewels in the movie. The Luminity Suite is a geometric set with matching necklace, bracelet and earrings.

For Christmas church and again in the final moments of the movie, Diana wears gold contemporary Chanel Coco Crush earrings. The style was introduced relatively recently and not quite in the oversized gold mode Diana favored.

They are a reflection of Kristen Stewart’s style. The star has been a brand ambassador for Chanel since 2013. She was clearly giving a hat tip to the fashion house who recreated so many outfits of the period for her to wear in the movie. She has thanked Chanel profusely in interviews for all they did for the production.

In the trailer for Spencer above you can see several of the Mouawad diamond jewels on Diana and Queen Elizabeth (Stella Gonet).

The Jewels Worn By Natalie Portman in ‘Jackie’