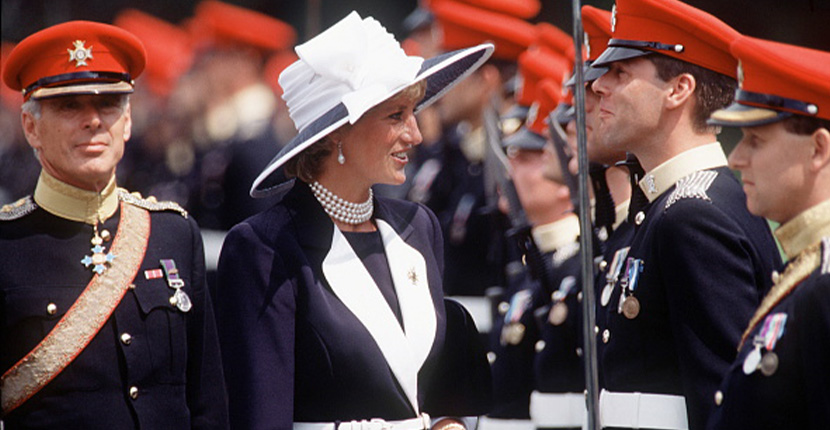 In July 1995, while visiting the Light Dragoons Regiment in Germany in her role as their Colonel-in-chief, Princess Diana wore pearl and diamond earrings and a costume pearl necklace. Note how she is making a soldier in the Guard of Honor smile, perhaps with a joke, while he stands at attention. Photo Getty

November 11, 2021—The late 1980s and 1990s was a tumultuous time in Princess Diana’s life. We all know now how Prince Charles’s affair with Camilla Parker Bowles was making her miserable. Things officially began to unravel in 1992 when Charles and Diana separated.

Spencer starring Kristen Stewart as Diana, which was released in theaters on Friday, is set during a Christmas holiday at Sandringham in 1991. In the fever dream mode of the film, Diana is losing it with her husband’s bad behavior not to mention all the rules and regulations of royal life. For her multiple outfit changes in the production, costume designer Jacqueline Durran told Vogue she studied photos of the royal from around 1988 to 1992.

Through all the troubles Diana experienced she looked fantastic. According to Elizabeth Holmes, the author of HRH: So Many Thoughts on Royal Style, it was studied. Diana read her fashion critics and adjusted accordingly.

I was further reminded of Diana’s style this week when pictures were released of The Crown’s new Diana, Elizabeth Debicki, wearing the Revenge Dress. The LBD was lit up by a costume version of Diana’s seven-strand pearl necklace with a large simulated sapphire and diamond centerpiece.

The dress gets its name from the context of the situation. Diana wore it in 1994 for a gallery opening the same evening Charles was on TV admitting to the world he was having an affair with Camilla. (The couple finally divorced in 1996 after the Queen insisted they do so.)

The back-to-back popular culture moments, focusing on Diana’s style in the late 1980s through the 90s inspired me to take a look at the period and how she wore her jewelry.

What did I learn?

The Revenge dress gets all the credit for the sex appeal, but Diana was often alluring and jewelry was always part of her dress for success equation. She made pearls somehow seem seductive which is no mean feat. She tossed on important vintage jewels as easily as a pair of jeans.

And she also wore costume jewels which is something I had forgotten. I often lament about how Kate Middleton chooses costume over fine jewelry. Well, there are differences between the two women. Diana never wore costume pieces for evening events. And her costume never looked cheap.

See more of Diana’s jewelry looks in the images below.

Princess Diana wore a color coordinated hat and suit with her $75 costume Venus Drop Pearl Earrings from the Met Shop during a 1993 trip with Prince Charles to Liverpool for The 50th Anniversary of The Battle of the Atlantic.

Despite the fact that Charles and Diana separated in 1992, they continued to attend events together. Charles can be partially seen in the picture above on the left.

The oval sapphire and diamond centerpiece of Diana’s beloved seven strand pearl choker was a wedding present from the Queen Mother. It was originally a brooch. Diana had it converted into a choker and wore it perpetually.

In November 1991, Princess Diana laughed with the cast of ‘Simon Boccanegra’ at the Royal Opera House while wearing a red Victor Edelstein gown with a pearl choker featuring diamond and ruby bar motifs and diamond and ruby earrings.

Detail of Diana at the Royal Opera House showing her pearl, ruby and diamond jewels.

At Ascot in 1988, Princess Diana echoed the polka dots on her Victor Edelstein dress and a Philip Somerville hat with a pearl choker and pearl and diamond pendant earrings. She is also wearing her gold Piaget watch and engagement ring.

The Sultan of Oman gave Princess Diana the sapphire and diamond suite she wore to the October 1995 premiere of The Haunted in London. The gems in the jewels matched her engagement ring.

During an official visit to France in 1988, Princess Diana attended a service commemorating the 70th anniversary of the armistice at the Arc de Triomphe in Paris wearing a double breasted Jasper Conran coat and a Viv Knowlands hat as well as costume pearl earrings by Chanel with a quilted gold tone pattern. She wore these earrings regularly for over a decade.

Diana’s Pearls Are a Major Part of ‘Spencer’

The Most Famous Engagement Ring In The World