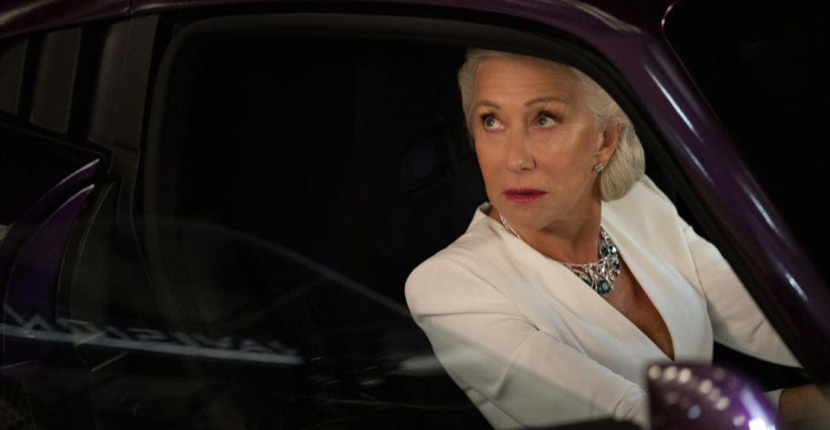 July 29, 2021—You may, like me, have a love-hate relationship with the Fast & Furious franchise. The movies can be fun and…they can be a bit much. But I will say in the ninth installment “F9” had plenty to enjoy for this jewelry journalist. Helen Mirren, takes a turn behind the wheel as Magdalene Shaw (Queenie). Turns out the 75-year-old dame loves fast cars!

And, Mirren’s wardrobe has gotten more dramatic since we left her in the Fast & Furious 8 aka The Fate of The Furious in 2017. Sporting a chic white suit and zebra-print ankle boots not to mention a major necklace, the Oscar-winning actress gets behind the wheel of a $279,000 purple super car – vrooming away through busy London.

Fans are chirping on Twitter that they are glad F&F “finally gave her a car.” Mirren gives full credit to Vin Diesel for her being a part of the F&F franchise and giving her the keys. In an interview with Jeff Conway for Forbes, she mentioned: “The reason I wanted to be in the Fast & Furious movies was so I could drive cars really fast down closed-off streets…For the first two movies, I wasn’t anywhere near a car, so I paid my dues, so now I was allowed to get into the car. I suspect really I’m in it because I begged to be in it and Vin is a very kindhearted person.”

Why is she racing through the streets? Well, you don’t need much of an excuse in the franchise to do that but there is good reason and, dear reader, it involves jewelry.

Warning there are spoilers ahead…

Mirren essays the role of criminal mastermind Queenie, who gets away with a very, very expensive necklace from Boodles, the celebrated British jewelry brand. A soiree scene at the store’s New Bond Street flagship showroom is followed by a car chase. With Dom Toretto (Vin Diesel) joining for the joyride, Queenie finds creative ways to lose the cops hot on her trail.

What are the details on the jewel that got the scene rolling? It is named the Greenfire Necklace and part of a High Jewelry collection by Boodles.

‘The Million Pound Necklace,’ (which adds up to over $1.3-million) is just the type of treasure you want to see on the big screen. The jewel has seven deep green cushion-cut emeralds, totaling 46.20 carats and is surrounded by 17.38 carats of round brilliant-cut diamonds and platinum. (The suite includes matching pendant, earrings and ring, but Mirren just wears the necklace in the movie.) The gorgeous Colombian emeralds are sourced from the legendary Muzo mines.

For the jewel, Rebecca Hawkins, head of design at Boodles, drew inspiration from sunbeams filtering through forest trees: the reflection is effectively captured through scattered brilliant-cut diamonds resting among vine like encasings. “The design is based on the organic shapes of entwined foliage, shaped with a stylized rhythm of curves and offset by an asymmetrical composition.”

It looked amazing on screen. Indeed, it counts as one of the best necklaces we have seen in a blockbuster in a long while.

The jewel also reminded me of the many times Helen Mirren has stolen all the attention on a red carpet by wearing a big necklace. There was the moment recently at Cannes when she had Dolce & Gabbana High jewelry. And who could ever forget the time she wowed everyone in a big David Webb necklace to the premiere of her HBO special Catherine the Great.

I wouldn’t be surprised if the costume designer for Fast & Furious had taken notice of how a big necklace super charges Mirren’s looks. There is no doubt the Boodles jewel adds real pick up to the movie.