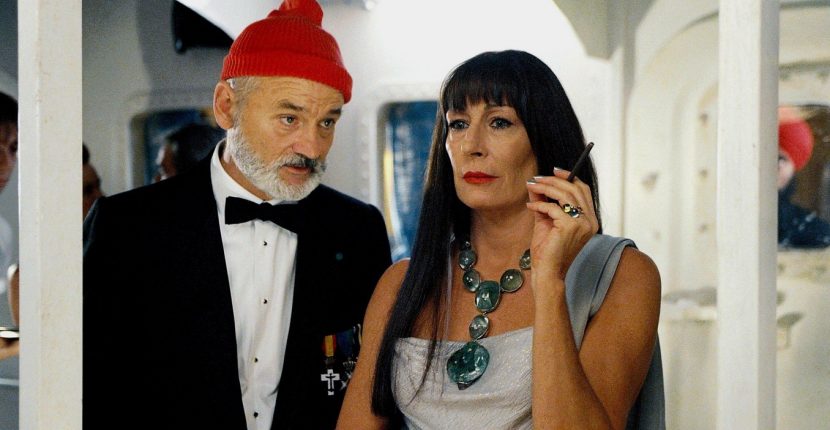 In The Life Aquatic, Bill Murray consults with Angelica Houston who is wearing a necklace from the Marta Marzotto Collection. Photo Alamy

July 21, 2021—Just the sight of Wes Anderson, and part of his troupe of actors on the red carpet in Cannes last week for the screening of The French Dispatch, gave me flashbacks to the sweet way the director has used jewelry in his movies. I conducted a full-on film festival in an orderly and efficient Wes Anderson mode. The director’s beloved style has several well-known elements—story telling by chapters, symmetry and center frame camera work, the use of maps, a slow motion ending and general air of melancholy.

While fans have dissected these types of details in Anderson’s work ad infinitum, I have never seen the jewelry in his movies reviewed. And the jewelry thread weaves throughout several productions like other signatures. Pieces featured in the plot are often handmade tokens of affection.

In the story of young love, Moonrise Kingdom (2012), the orphan Sam (Jared Gilman) makes scarab and fishhook earrings for his girlfriend Suzy (Kara Hayward) and dramatically pierces her ears so she can wear them.

Another jewel that tells a backstory is a costume pearl and gold tone grape brooch pinned to Sam’s Khaki Scout uniform. It belonged to his deceased mother.

In The Grand Budapest Hotel (2014), Monsieur Gustave (Ralph Fiennes) presents his protégée’s true-love Agatha (Saoirse Ronan) with a light blue ribbon necklace suspending a porcelain pendant with the Society of Crossed Keys motif for concierges. She wears the jewel through the rest of the film and it turns up again on her lover later in life.

It’s worth noting, the across-the-finger skull rings the evil Jopling (Willem Dafoe) wears on both hands were created by the multi-talented jewelry designer Waris Ahluwalia who has appeared in a couple of Anderson’s films.

In The Life Aquatic with Steve Zissou (2004), an adventure story mainly filmed in Italy, there is yet another token of affection. Ned (Owen Wilson) gives his love-interest Jane (Cate Blanchett) a sand dollar shell strung on a peppermint dental floss necklace.

The Life Aquatic also has the most impressive jewelry in any Wes Anderson production. The pieces are more a part of costume than plot and worn by Angelica Houston who is Eleanor Zissou otherwise known as “the brains behind team Zissou.” Her character comes from money and these extravagant jewels hint at that detail of her biography.

At the time the film was released, the actress explained to Variety, “[Costume designer Milena Canonero] was of the idea, and I concurred, that Eleanor was a bit of an underwater creature and that my jewelry and everything I wore would some way relate to the sea.”

The link to the sea was often translated into jewelry with materials in the many colors of the ocean. Houston wears lots of Native American turquoise. Styles include chunky bracelets, rings and bead necklaces. She has several substantially sized silver fish pendants. There is also a watery color bold bead necklace the actress sports with a crème-colored suit.

Houston puts on the two most spectacular jewels at the movie premieres bookending The Life Aquatic. Both come from the Italian designer Marta Marzotto. The first piece is described by Variety has having “paperweight sized emeralds.”

As much as I would like this to be true, I am not entirely sure it is. I think it might be made of light emerald colored glass. Marzotto was known as a costume jewelry designer although she did work with precious materials on occasion. Her work is rare and difficult to find today in the United States. Whatever the material is in the necklace worn by Houston, it exemplifies modern Italian jewelry at its best. There is an ease and impact to the look.

At the end of the film, Houston wears several coral horns on a neck wire and coordinated bracelets, all by Marta Marzotto. Again, I don’t know if the coral is authentic but it looks real. The motif is a historic symbol of protection in Italy and makes perfect sense for the end of the film after all Steve Zissou and the team has been through.

Wes Anderson’s next film The French Dispatch will be released in the United States on October 22, 2021.

The Stylish Jewels Being Worn During Week 2 of Cannes

Jewelry Drives The Plot in ‘Cruella’