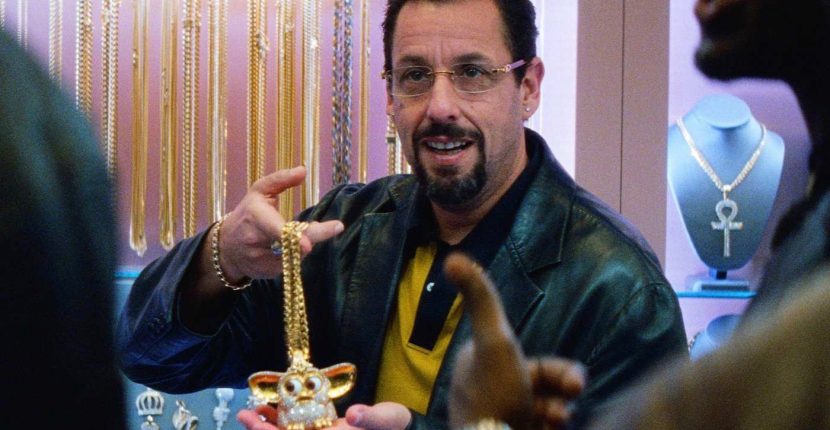 If you are in the jewelry business in New York, at one point or another, you have found yourself on 47th Street, the heart of the jewelry district. “The Street” is located between 5th and 6th Avenue, but the actual geography spills over into other blocks surrounding the main action. It comprises the Diamond District and dealers who sell everything from authentic vintage treasures and gems to findings and fake Rolexes. In the rabbit warren of back offices there are bench jewelers making pieces for the big houses and doing little repairs. The shops and exchanges are open to the public, but mainly The Street is for the trade. Deals are still done on a handshake. Everyone prefers if you pay in cash. It’s an old world place with lots of grit and a language all its own.

Uncut Gems captures a certain side of The Street to absolute perfection. The adrenaline-fueled film from directors Josh and Benny Safdie, stars Adam Sandler as Howard Ratner, a 47th Street dealer, who is running countless schemes simultaneously and doing major gambling on the side. His main hustle involves an uncut Ethiopian opal and the Celtic’s Kevin Garnett (playing himself). Through the transaction the film lifts the veil on how dealers without cash can get it. There is a lot of borrowing from Peter to pay Paul or in the case of Sandler’s character there are about 10 Peters and Pauls.

One of the most astonishing elements of the anxiety inducing plot is how the Safdies used authentic aspects of life on 47th Street to tell the story. It’s a setting they were intimately familiar with as their father once worked in the district. Uncut Gems filmed exteriors on location, recreated a jeweler’s shop on a sound stage and used real dealers and jewelers as extras. They also consulted with the Avianne and Co. Jewelers, a company on The Street that has clientele from the sports world.

The accurate costuming of all the characters, loving dubbed Schmuck Style by Vogue, was carried out by stylist Miyako Bellizzi, along with consultant and “fashion mensch” Mordechai Rubinstein. The massive Furby pendant, custom made for the production, captured the crazy type of bling a dealer like Ratner would hawk. All the characters were taught how to properly use a jewelry loupe, a simple act that is rarely done right on screen.

The filmmakers made amazing use of all the things that can be found in a dealer’s office. Security monitors bosses often have around their desk, so they can see who is outside the door, played a role. The proximity of offices in the district made it possible for Ratner to get cash out when his creditors were in the next room. And the jeweler’s mantrap, the vestibule with two interlocking doors found in every jewelry office, is used to move the action a couple of times. Lot of these details can be glimpsed in the trailer.

There is no glamour in Uncut Gems. The title is a synonym for rough gems and the film deals with rough situations. In all, it is fascinating to see how  47th Street and some of its characters are brought to life on the big screen. The movie has been almost universally praised by critics and Sandler is on the short list of front runners in the Best Actor Oscar race.