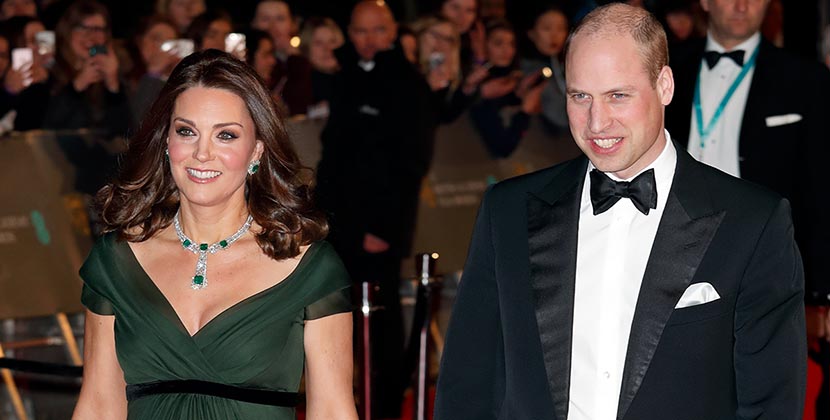 Prince William with Catherine, the Duchess of Cambridge, who is wearing her emerald and diamond suite at the The EE British Academy Film Awards. Photo Getty

The suite she wore at the BAFTAs is convertible

On Sunday night, at the 71st British Academy Film Awards, otherwise known as the BAFTAs, Kate Middleton lit up the red carpet with emeralds. While the royal doesn’t pose on the step-and-repeat like movie stars, her second year walking down the red carpet for the ceremony held at Royal Albert Hall did give photographers an opportunity to snap her full look which is a lot more than we usually get when she is shot on the way to events at Buckingham Palace in the back of a car with William. 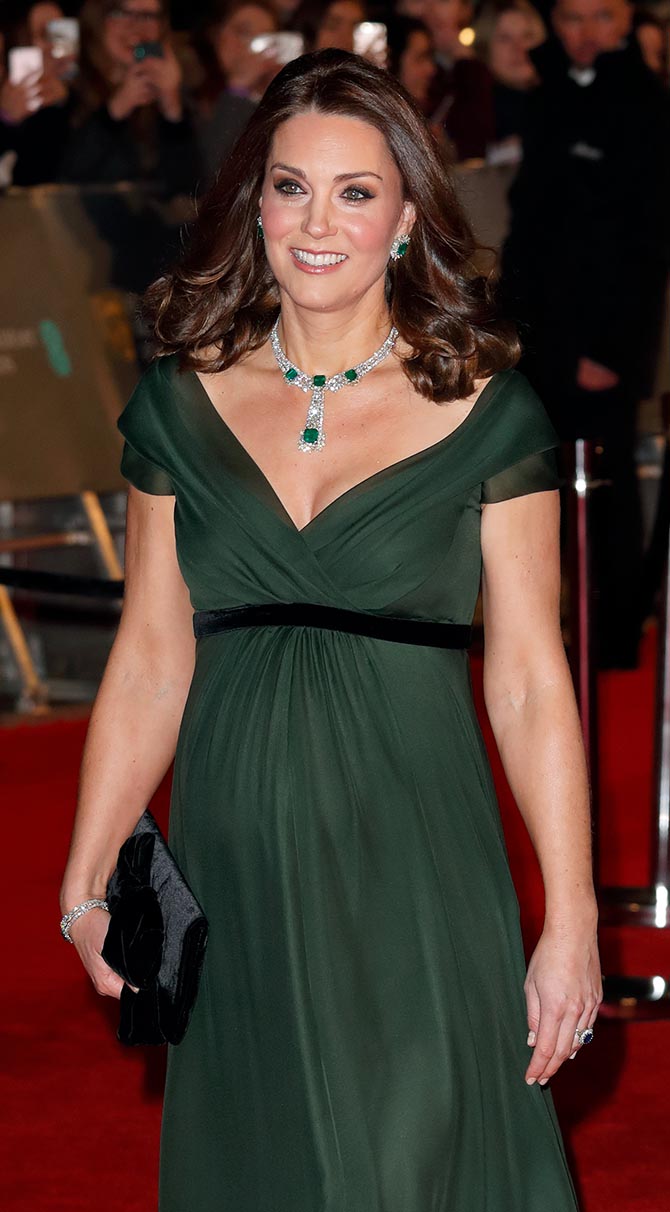 Kate Middleton wearing her emerald and diamond suite at the 2018 BAFTAs. Photo Getty

The Duchess, who is pregnant and due to give birth in April, wore a suite of emerald and diamond jewels that included a necklace, large stud earrings and a bracelet. While it seems to be the first time Kate has ever worn the necklace, the studs are believed to be the bottom portion of pendant earrings she wore to the St. Andrews 600th Anniversary dinner at the Metropolitan Museum of Art during a visit to New York City in 2014. The bracelet was worn on both occasions. Kate also happened to be pregnant and wore Jenny Packham gowns at the two events. The 2014 dress was blue, while the dress at the BAFTAs was dark green with a black sash. 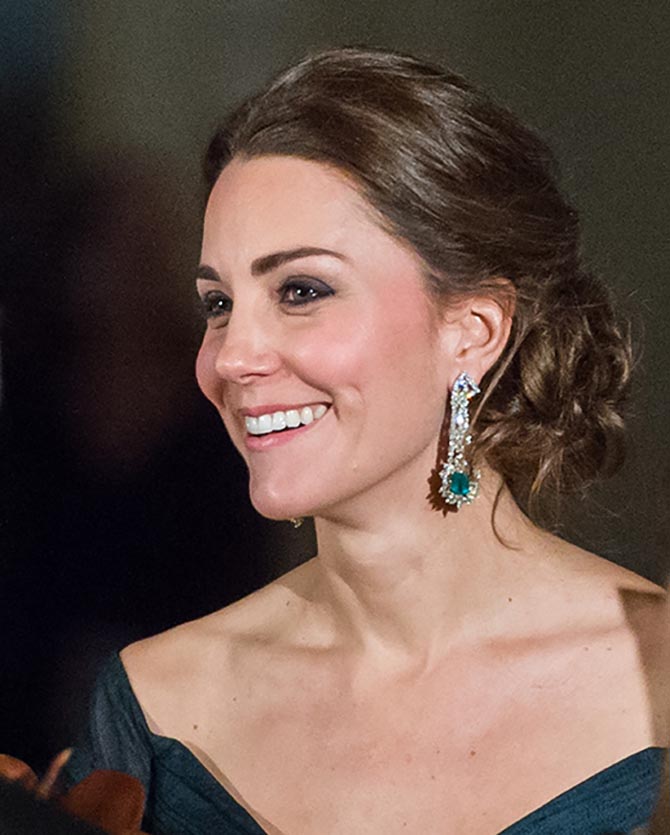 If you are wondering where she got the jewels, in coverage of the 2014 dinner in New York officials said they were a “private gift.” Honestly, I find this slightly mysterious. Princess Diana received many jeweled gifts from dignitaries while she was married to Prince Charles. The sources, to my knowledge, were always revealed. Interestingly, last year at the BAFTAs Kate wore a pair of earrings that have never been identified in any way—where she got them or who designed them. No one seems to know who designed these jewels either. The only thing I can say in terms of design is that they do look reminiscent of the Gismondi jewelry Jane Fonda wore to the 2017 Emmy Awards, but the Italian jeweler says it is not their design. 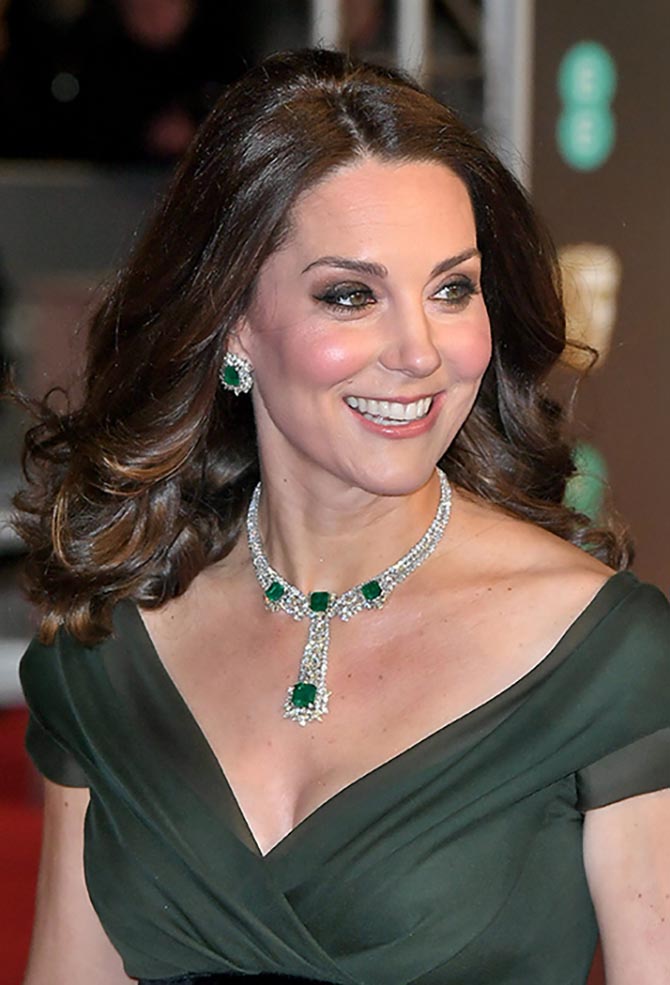 Kate Middleton in her emerald and diamond suite at the 2018 BAFTAs. Photo Getty

According to Palace protocol, the royal family isn’t allowed to make political statements with their clothing. While Kate’s dress was very dark in color, she did not join the majority of the women at the BAFTAs who chose to wear black in solidarity with the Time’s Up movement, echoing the statement made with fashion at the Golden Globes. Some have suggested that emeralds seen on the Golden Globes red carpet, and perhaps those chosen by Kate, are a nod to the English tri-color suffragette jewels. This gem theory might be reaching, but I like to believe it could have crossed Kate’s mind when she chose to put on her bold emeralds.