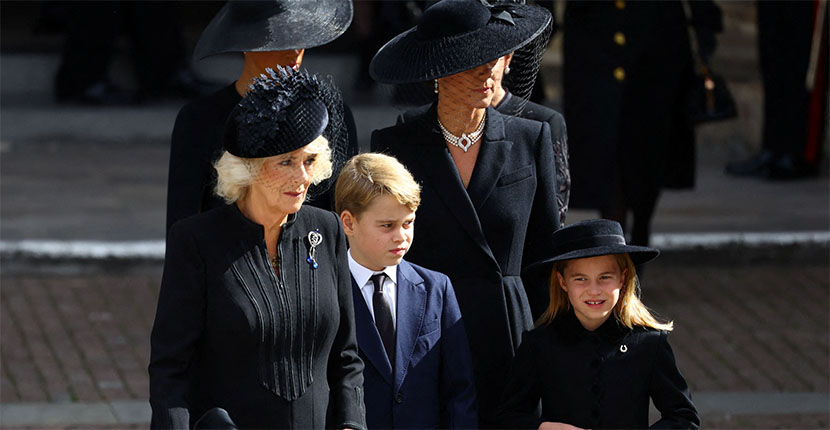 September 19, 2022—Eleven days after Queen Elizabeth II died at Balmoral castle her funeral was held today at Westminster Abbey. In between those two dates, the world was reminded of the incredible life story of Britain’s longest reigning monarch.

At the service, in a final tribute to the Queen, female members of the royal family young and old wore jewels that reflected the monarch’s life story.

Catherine, the Princess of Wales (aka Kate Middleton) wore the Queen’s Four Row Choker with the openwork diamond motif. The British monarch had the jewel made by Garrard in the 1970s with pearls she received from the Japanese government.

Kate wore the jewel previously for Prince Philip’s funeral service. In Britain, pearls are considered appropriate to wear during a period of mourning.

The princess has also worn the necklace in happier times. She had it on at Queen Elizabeth and Prince Philips 70th wedding anniversary. At that moment, I did a deep dive on the jewel and covered when Princess Diana and Queen Elizabeth wore the design.

As she has done in the past, Kate paired the necklace with the Queen’s Bahrain pearl drop earrings. Composed of diamonds and pearls the Queen received the pearls from Hakim of Bahrain on her wedding day.

After the funeral procession last week when all the journalists around the world, including yours truly, wrote about how pearls were traditionally worn during periods of mourning in Britain, Camilla, Queen Consort switched things up and chose to wear the diamond and sapphire Hesse Diamond Jubilee Brooch which was clearly still in keeping with the somber mood. It was also reflective of the familial and grand history of the monarchy.

The piece was a gift Queen Victoria, who was Elizabeth II’s great-great-grandmother, received for her Diamond Jubilee celebrating her 60th year on the throne. According to British Vogue, “The heart-shaped pin—featuring the number 60 in Slavonic numerals wrought in diamonds, surrounded by a cabochon sapphire at the top and two large sapphire drops at the bottom—was a gift to Queen Victoria from her grandchildren who were descendants of the late Princess Alice, Grand Duchess of Hesse and by Rhine.”

Camilla has worn the jewel on numerous occasions including during the Queen’s Diamond Jubilee festivities.

The most poignant piece of jewelry at the funeral service was the little diamond horseshoe brooch worn by Queen Elizabeth’s great granddaughter Princess Charlotte. People magazine reports “exclusively” that the jewel was a gift from the monarch.

It’s quite possible it is a 19th century jewel from the Queen’s collection. Horseshoe brooches were very popular at the time.

The second child of the Prince and Princess of Wales shares her grandmother’s love of horses.

Meghan, Duchess of Sussex (aka Meghan Markle) once again wore the pearl and diamond earrings she received from Queen Elizabeth II as a wedding present.

The Duchess of Sussex debuted the designs when she had her first solo outing with the monarch shortly after her royal wedding to Prince Harry. It has never been revealed who made the jewels.