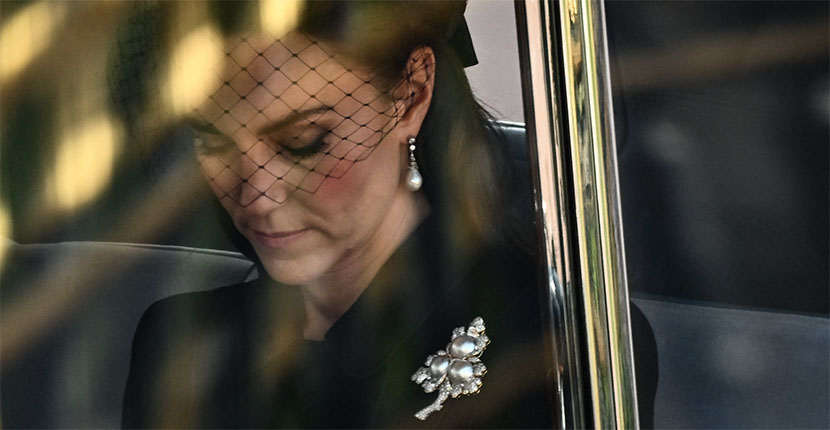 Catherine, the Princess of Wales wearing a pearl and diamond brooch from Queen Elizabeth II’s collection and earrings that belonged to Princess Diana. Photo Getty

The Imperial State Crown and pearls of Kate, Camilla and Meghan

September 15, 2022—No one does pageantry like the British. The solemn grandeur of the procession with Queen Elizabeth’s coffin draped in the Royal Standard on the back of a gun carriage as it was transported from Buckingham Palace to Westminster Hall was breathtaking.

When the military bands of Scots Guards and Grenadier Guards began playing one of Beethoven’s Funeral Marches, it set an utterly heart wrenching tone of sadness you could see across the faces of the royal family and the massive crowds who had gathered to watch the cortege pass by.

I had no intention of writing about the jewelry at this solemn ceremony until I saw the Imperial State Crown on top of the Queen’s coffin. I am not sure a jewel has ever been quite as powerful.

The diamonds covering the historic piece placed on top of a purple velvet pillow glittered in the sun and immediately communicated to all the queen’s position and the long history of Britain’s royal family. It’s extraordinary to think during Elizabeth’s 1953 coronation, when the crown was placed on her head, Winston Churchill was Prime Minister and the Duke and Duchess of Windsor were very much alive.

A few years ago, for a documentary on her coronation the queen delightfully spoke about the Imperial State Crown. She highlighted the history and made little jokes about it too, giving everyone a glimpse of her sense of humor that those who knew her best have shared stories about with the media since she died on September 8 at Balmoral Castle.

During the funeral procession, the jewelry symbolism extended to others in attendance. Kate Middleton, whose title has changed to Diana’s former title, the Princess of Wales, wore diamond and pearl jewels.

According to British Vogue, “Royal mourning dress is governed by strict protocols, and that extends to jewelry.” The journalist, Hayley Maitland, went on to add: “Pearls have been associated with mourning since at least the reign of Victoria. It’s widely known that the late monarch never wore color again after the death of Prince Albert, her beloved husband, including precious stones.”

Kate’s pearls included a giant three leaf brooch from Queen Elizabeth’s collection. The pavé-set diamond design has a large pearl set in each leaf. Nothing is publicly known about the designer of the jewel, when exactly it was made or who gifted it to the queen. According to multiple sources, the monarch was only spotted wearing the piece once in 1999. Kate has also worn it once in 2017.

Kate’s pearl earrings come from Princess Diana’s collection. She received them as a wedding gift from Collingwood Jewellers and wore them perpetually. Princess Kate has worn them frequently including in her 40th birthday photos taken by Paolo Roversi. At the funeral procession, I think it is safe to say, they were a tribute to Diana.

Camilla, Queen Consort also wore pearls as a symbol of mourning. The Court Jeweller who is a go-to source for royal jewelry minutiae, wrote a story in 2018 detailing several of Camilla’s pearl jewels. She describes the four-strand pearl necklace with a diamond clasp as a “workhorse” Camilla wears all the time.

According to The Court Jeweller, the walking stick brooch on her black dress is a jewel the Queen Consort reserves for occasions of memorial and remembrance. It is believed the unique piece was a gift from her father Major Bruce Shand. There doesn’t appear to be any public information about the designer of the jewel or when it was made. Even the materials are in question. Some have said it is silver.

Like many animals, the walking stick symbolizes several things. Because it blends into the natural world, one meaning is that life is full of illusions.

Meghan Markle also wore pearl earrings for the Funeral Procession. Her delicate diamond and pearl stud earrings were a wedding gift she received from the Queen.

The Duchess of Sussex debuted the designs when she had her first solo outing with the monarch shortly after her royal wedding to Prince Harry. It has never been revealed who made the designs. While Meghan’s jewels don’t have the grandeur of historic pieces, they do instantly express sentiment in a way only jewelry can.