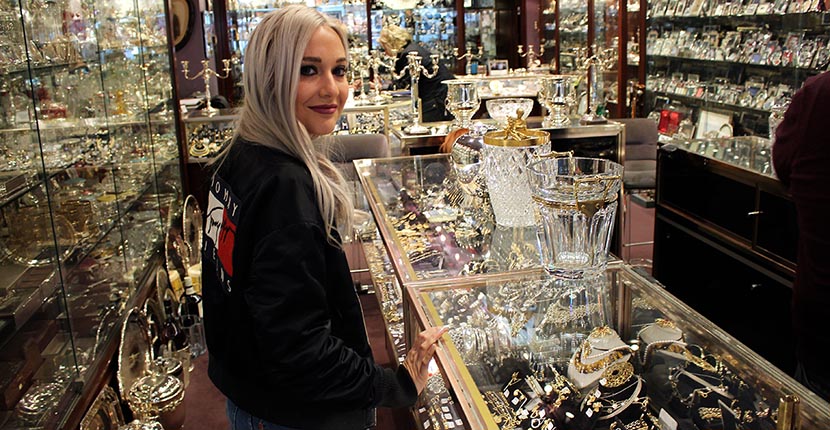 In celebration of the 10th anniversary of the beloved blog

Oh, sure today just about everyone who is interested in jewelry and spends time on the old internet knows Gem Gossip, but I am pretty sure I was among the first wave. Well, actually, the truth is—she found me. Shortly after I joined Twitter in 2009, she sent me an @ message. I was such a neophyte I didn’t even know how to answer. When I figured it out, she requested an interview. To this day her questions rank among the smartest I have ever been asked. The powerhouse behind Gem Gossip, Danielle Miele, who is based in Franklin, Tennessee, knew everything about my career. She knew more than most publicists working in New York whose job it is to know about editors. She knew things I had done, I’m sure my family had forgotten.

That was way back in the day when there were few real jewelry blogs. Mainly there was just Gem Gossip. Flash forward to now when there are lots of jewelry blogs, Danielle just keeps getting better. In celebration of her epic 10th anniversary, which is practically like 50-years in internet years, I made a list of 10 reasons to love Gem Gossip. See it below.

Wishing you a happy anniversary Gem Gossip! You are a pioneer and a leader in the digital jewelry space. Oh, and I think you celebrated your anniversary in July, but I’m running a blog over here and, well, it is harder than you make it look! 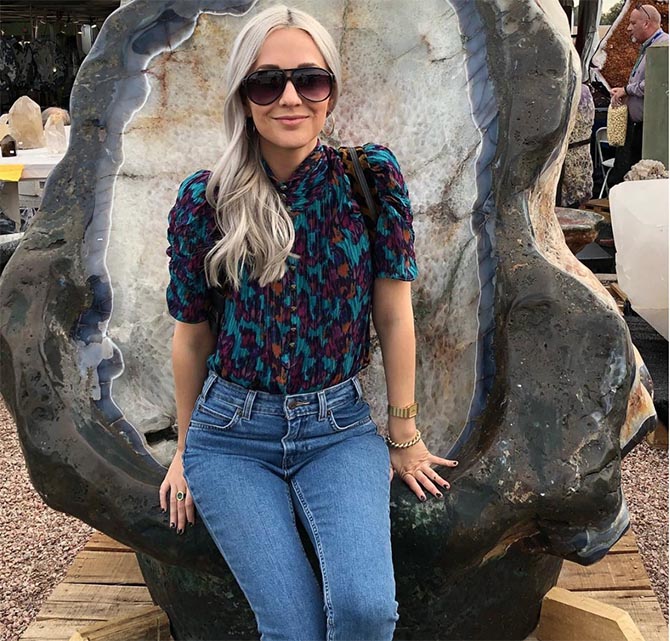 1. SMART: Danielle, who I am going to refer to from here on out by her moniker Gem Gossip, is not just smart in how she blogs, she is educated. Years ago, she studied for and received her Graduate Gemology degree from the Gemological Institute of America (GIA) and shared the experience every step of the way including lots of photos sitting behind a microscope. In other words, she knows from where she speaks.

2. ORIGINAL: Gem Gossip has come up with all kinds of franchise ideas that make her blog stand out. They are ideas with real legs. She has done 94 Show Me Your Rings columns to date. Each features the personal rings from collectors all over the world. I can’t wait to see how she celebrates the 100th rendition of this signature series. 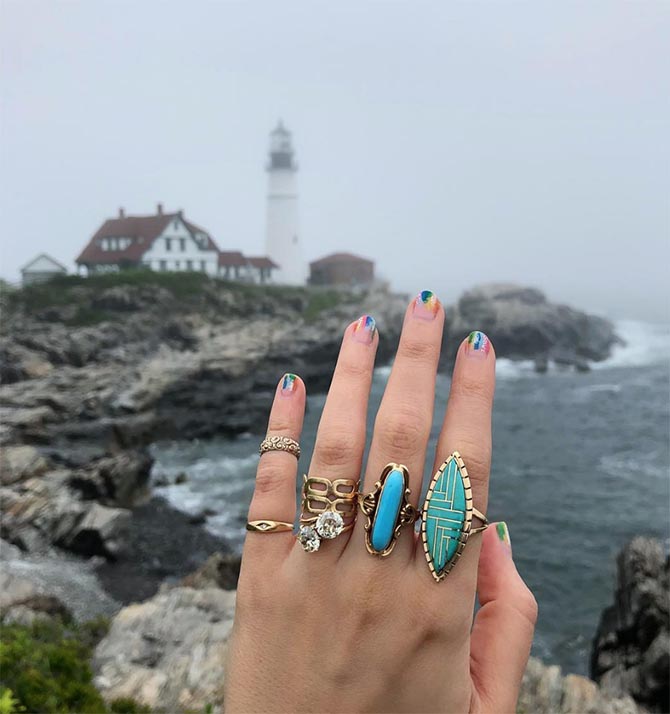 3. ADVENTUROUS: Gem Gossip is an all-American Girl and she has traveled from sea to shining sea visiting jewelry stores and taking us all along for the ride. The journeys give coverage to fascinating stores on the road less traveled. She charts it all in her Jewelry Road Trip Series.

4. LOCATION, LOCATION, LOCATION: Gem Gossip lives in Tennessee. It’s not exactly a hotbed of jewelry activity, but she doesn’t let that stop her from covering great designers. She worked around the problem by coming up with Jewels at My Doorstep. Designers send her their collections. She spends quality time with the pieces, photographs them and reviews them from her home. 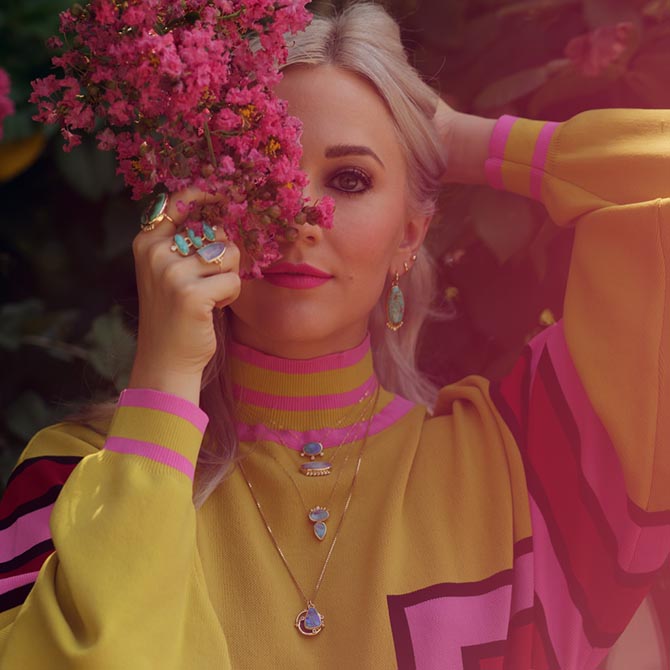 5. FUNNY: Gem Gossip is seriously funny. If you only follow her on Instagram, you are only getting a fraction of her humor. She is truly hilarious with the remarks and the memes on Twitter.

6. SELFIE QUEEN: Gem Gossip shows her followers jewelry by wearing it. She is supremely photogenic and knows how to style and layer the pieces to make them eye-catching. I swear she was posing in jewels before the term “selfie” was invented. It’s a fact that makes her the Selfie Queen. I guess technically all her images were not exactly selfies by definition. When she began, Gem Gossip would have her mother take photos. Now, she works with some great local photographers like Sara Kiesling. 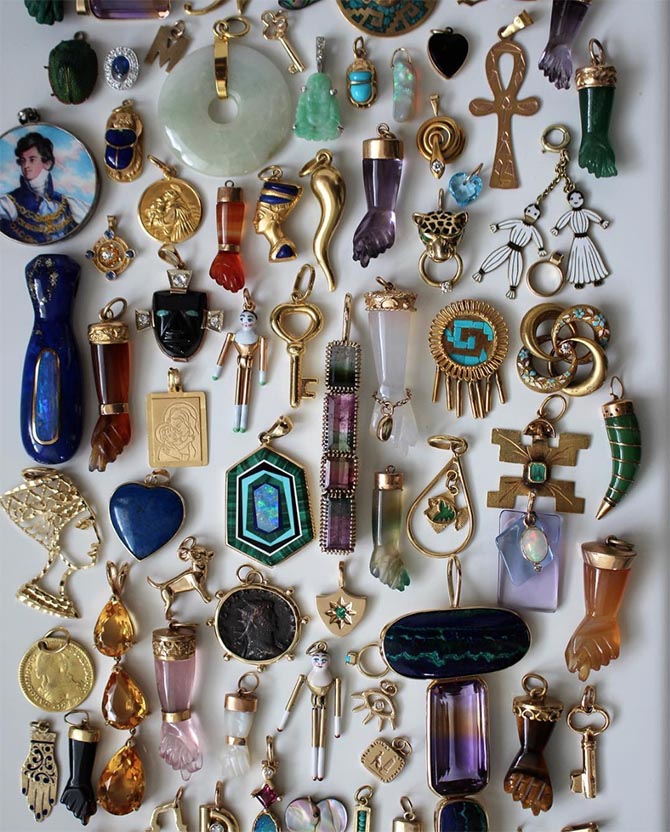 A few of Gem Gossip’s charms in her personal collection. Photo @GemGossip/Instagram

7. COLLECTOR: A major theme for Gem Gossip is her huge personal collection. She shares every aspect of it with her readers like the nitty-gritty of organizing, storing and cleaning.

8. RETAILER: Gem Gossip is also a retailer. A curated selection of jewels and vintage jewelry boxes can be purchased via her second Instagram @shopGemGossip. She posts a new item every single day at 8:30pm CST. She is a real girl’s girl about it too, offering a layaway program. 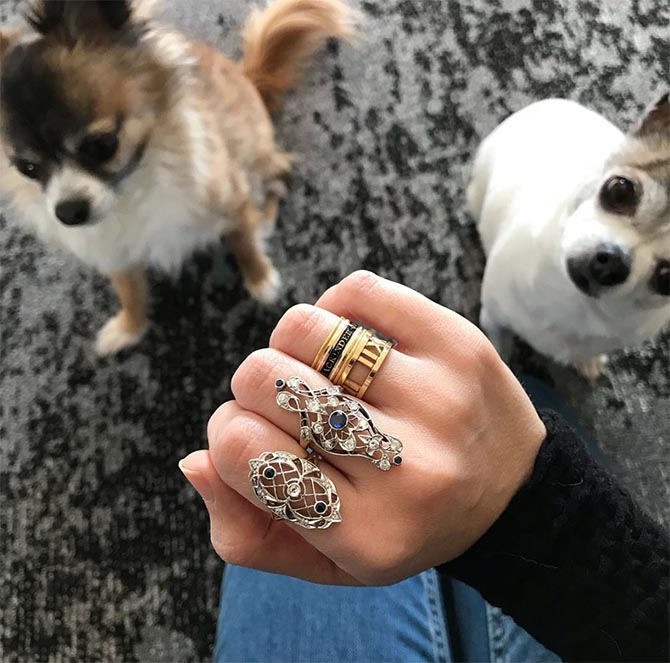 Danielle Miele aka Gem Gossip showing a few of her signature rings and her dogs Frankie and Chiefy. Photo @GemGossip/Instagram

9. METHODICAL: One must be organized to operate a blog. Gem Gossip is at a Wes Anderson crazy-obsessed methodical level of doing things. She is an epic list maker. She gives beautifully clear recaps of events with succinct take-away information. And she can layout scores of jewels in a tidy manner.

10. GOOD CITIZEN: At the dawn of the internet era, when Gem Gossip began, blogging and social media was really about creating a sense of community in specialized areas of interest. It’s one of the reasons I became so enchanted with the web. The internet made it possible for all of us jewelry lovers to be neighbors and friends. Things are not exactly like that now, but Gem Gossip hasn’t changed. She is very supportive of the jewelry community. She has recently started to post job listings to help people find work. She shares and tags other people’s photos with her Friday Faves. She gives jewelry tips in her Insta stories on Tuesdays that are really priceless. Who knew a ring stuck on your finger could be easily removed with a squirt of Windex? Gem Gossip that’s who knew.

Why I Love The Antique Jewelry & Watch Show

Find The Jewelry Of Your Dreams at Up On Park