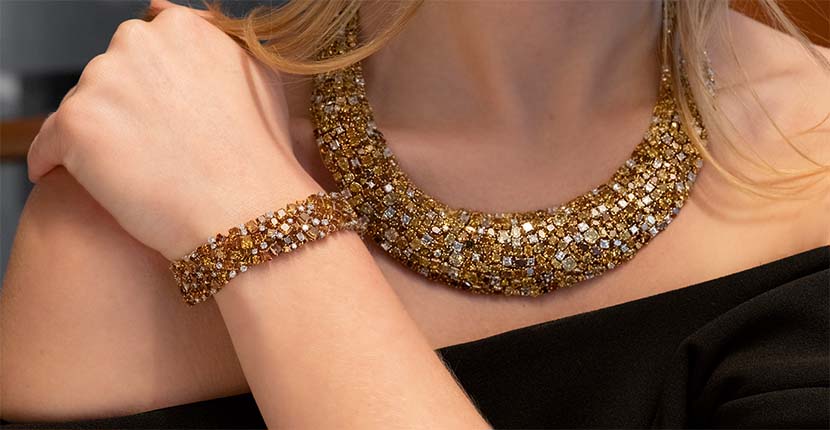 May 4, 2022—When you think of American jewelry, the first thing that might cross your mind is essential pieces, items that are the equivalent of a little black dress, a button-down shirt and a great pair of jeans like diamond studs, a strand of pearls and a tennis bracelet.

Or perhaps you think of the famous names in American jewelry like Harry Winston and his gorgeous gemmy jewels that inspired Marilyn Monroe to coo “Talk to me Harry Winston, tell me all about it,” in her signature song “Diamonds Are A Girl’s Best Friend.” But, of course, there is a lot more to American jewelry style once you delve a little deeper.

It’s an easy activity to do in Hindman’s May 17 Important Jewelry auction which features marquee names and independent super talents working over the last hundred years.

Select jewels in the sale show off many signature elements found throughout American jewelry such as a range of spectacular-colored gemstones, that go way beyond the traditional diamonds, rubies, emeralds and sapphires. An interest in engineering comfortable and wearable jewelry has elevated manufacturing to meet the practical demands of American clients.

Then there is the freedom designers feel to carve out roles for themselves in the field. “There are few things more American than self-invention,” explains Hindman’s Ruth Thuston, a Senior Specialist in Jewelry & Watches.

Find out more about select jewels from Hindman’s May 17 Important Jewelry auction below.

“Jewelers by birth since 1883,” was Philadelphia based F.J. Cooper’s tag line. The family-owned company established a national reputation by using breathtaking gems in custom made creations. The Hindman auction includes a wonderful Jadeite and Diamond Ring that shows how F.J. Cooper made pieces that were elegant platforms to show off the gems.

The yellow gold and peridot brooch (in the photo above) was quite possibly designed as a symbolic jewel. Peridots are associated with peace and harmony among other things. The wheatsheaf motif surrounding the gem most likely was intended to represents prosperity.

From the moment Marcus & Co. opened in 1892, the company was considered on a par with the best jewelers in New York City. The firm’s inventory ran the gamut of fashionable styles from revivalist themes such as Celtic motifs to Art Nouveau looks and glamorous diamond jewelry.

The diamond bracelet in the auction reveals Marcus & Co. had an eye for details. Note the unique diamond settings and delicate platinum granulation surrounding each gem.

When Olga Tritt arrived in America from Russia with her family, she had training as a watchmaker, but decided to become an antique jewelry retailer and established a business under her own name in 1910. Olga blazed a trail at a time when few women ran their own jewelry businesses in New York. She soon expanded into becoming a gem dealer and traveled to far-away places, including India and South America, to secure the best material. Then she found her true calling as a jewelry designer.

By the 1930s, Olga Tritt jewelry was associated with luxury and featured in Chrysler advertisements as an equivalent status statement. Her creations appeared regularly in Vogue and other fashion magazines. By 1939, Tritt’s position in the jewelry industry was such that the Brazilian government asked her to create a collection with their finest gems to be shown at the New York World’s Fair.

OLGA TRITT Yellow Gold, Emerald and Diamond Pine Needle Earrings (sold with the matching brooch in the photo above).

Today very little Olga Tritt jewelry is known because, like her French contemporary Suzanne Belperron, she rarely signed her creations. The pieces available at Hindman come from the original owner in Olga Tritt boxes and include the receipts.

Colorful gems, a signature of the designer, define the work. “The slightly different shades of aquamarines and peridots in the brooches create a beautiful three dimensionality,” explains Hindman’s Ruth Thuston. “And the use of emerald crystals for pine needles is incredibly clever.”

Founded in New York City in 1912, Oscar Heyman has long been known as the “jeweler’s jeweler.” Initially, the company functioned as a manufacturer for the most important names in Manhattan including Cartier and Van Cleef & Arpels. By the mid-20th century Oscar Heyman began to produce jewels under its own name that showed off the skills of their workshop and expertise in gems.

The coordinated bib necklace and bracelet (being sold in two separate lots) are perfect examples of Oscar Heyman’s signature “Scatter” style. Each piece is packed with white and colored diamonds magnificently mounted as though they were casually spread out on a surface. This informality in the setting is no mean feat to execute. The malleable mountings make the jewels even more impressive. “The bracelet is so flexible you can practically tie it in a knot,” explains Hindman’s Ruth Thuston.

If you are not familiar with designer Evelyn Clothier one look at her jewels might make you believe she was a rarefied talent who worked during the early years of the 20th century. Her French sounding name might make you think she was located in Paris.

In fact, Evelyn is an American who transformed her love of jewelry, particularly Art Nouveau, into a collection as something of a hobby. Well over a decade ago, when it was sold at Bergdorf Goodman in New York, Evelyn who is trained as a lawyer and pharmacologist continued working as the Executive Director of the American Medical Foundation for Peer Review and Education.

The bracelet in the Hindman sale comes from Evelyn’s personal collection and features lady bugs, clovers and opals. The motifs and gems were all considered lucky charms in the late 19th century.

A former tenured professor at Georgetown University, Daniel Brush left the academic world decades ago to develop his expertise in metalsmithing techniques, specifically, granulation and steelwork, chiseling and inlaying steel with gold. Daniel’s excellence and artistry has led to several monographs and solo exhibitions at world class museums.

The intimate hand-held steel sculpture at Hindman sparkling with gold and gold granulation was included in the book Daniel Brush: Gold Without Boundaries (Harry N. Abrams) that functioned as a catalogue for the artist’s exhibition at the Renwick Gallery of the National Museum of American Art, Smithsonian Institution in Washington, D.C. It is the perfect example of a singular American style invented through imagination and ideas.

The Jewelry School That Changed Everything