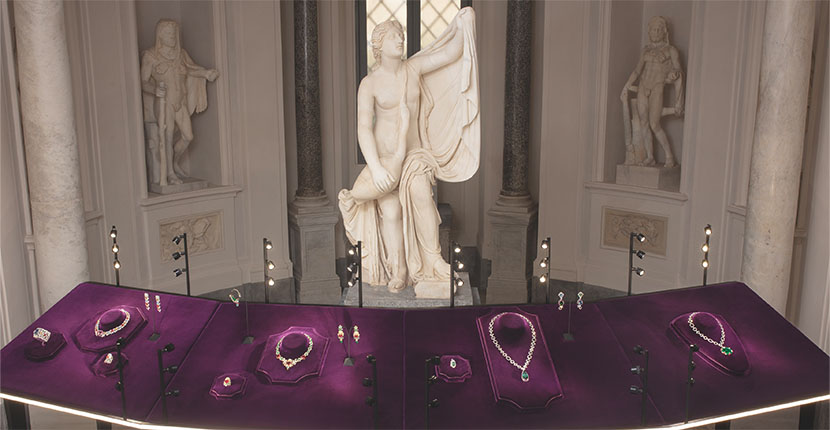 June 21, 2022—Once upon a time, when there were no cameras much less iPhones, tourists visiting Rome purchased micro-mosaics depicting the Eternal City’s beloved ancient monuments as souvenirs of their journey. The antiques were so ubiquitous, they can still be found in Roman shops like Studio Gioielleria Quattrocolo.

In a kind of nod to these days gone by, Gucci not only incorporated antique micro mosaics from the Grand Tour into their Hortus Deliciarum High Jewelry collection designed by Creative Director Alessandro Michele, they also forbid guests from posting photographs of the treasures on display in the Villa Albani last week.

Villa Albani is also a spot that famously can’t be photographed. The magical 18th century building, originally constructed for Cardinal Alessandro Albani as a location to house his antiquities collection, is considered one of the birthplaces of neoclassical taste. A friend in Rome shared with me how he was once granted permission to conduct a photo shoot in the villa and then only allowed to show an extremely limited amount of the space. An internet search proves this to be true. There are very few photos and most are of the exterior.

I know these old-fashion rules and regulations drove some Instagram obsessives to distraction, but I enjoyed the moment to focus on the jewelry rather than playing art director and trying to capture it beautifully on my phone.

Now Gucci has released images of several pieces in the collection which means they did a great job of building the anticipation as well as controlling the image.

Read on to find out more.

Gucci’s Hortus Deliciarum collection, Latin for ‘Garden of Delights,’ was divided into five categories covering an imaginary Grand Tour through time zones, myths and realities. The first room was literally the Grand Tour, trips taken during the 18th and 19th century through Europe beginning or ending in Italy.

The micromosaics depicting ancient Roman landmarks set in several of the designs infused narrative into the jewels and immediately gave them a sense of history and place. Interestingly, they came from Alessandro Michele’s personal collection and were authenticated by Christie’s.

Classic pearls became dreamy marine gems of myth and Cleopatra, the way Michele viewed them in the Gucci collection.

He also covered colorful gems in a category called kaleidoscope which takes the imaginary journey of the collection to the India of the Maharajahs.

Next it was off to the 1930s and 40s. The New World (or you could say New York) skyscrapers and geometries inspired the set of jewels. One of the most eye-catching centers on a hexagonal shaped 172-carat emerald.

The piece was one of several modeled by Oscar winning actress Jessica Chastain in the campaign photographed by Mert & Marcus for the collection. More can be seen on Gucci’s Instagram.

The final stop on Gucci’s Grand Tour was the 1970s. Color again plays into the designs and the silhouettes include long pendant necklaces.

One is in the form of Gucci’s Savana design that was originally depicted on a scarf made during the era. To Gucci, the flower from its history is as much a stop on their Grand Tour as the micromosaics. And I have to agree, representational designs always deliver the storyline clearly.

Micromosaics Jewels Go on Display at the VMFA