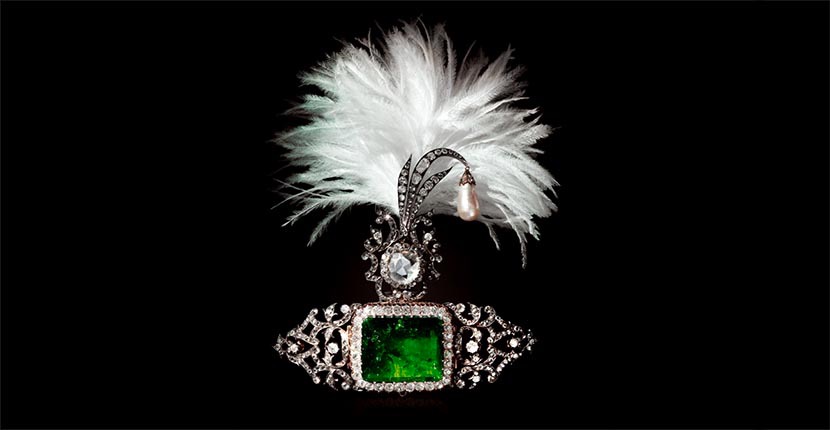 Indian Jewels Ignite the Dreams of An Author

M.J. Rose shares her thoughts on the Al Thani preview at Christie’s

New York Times best-selling author of the novel Tiffany Blues, M.J. Rose visited the early highlights preview of the Mughals and Maharajahs collection at Christie’s in Manhattan. We are thrilled she shared her unique perspective on the jewels in the historic auction with us below.

“It is not sufficient to see and to know the beauty of a work. We must feel and be affected by it.”— Voltaire

The brilliance of the diamond necklace literally took my breath away. Every one of the ornate objects from the ruby, emerald and gold inkwell to the jade falcon bangles was stunning. Emeralds were greener than grass. Spinels the color of raspberries. Pale, pale jade as pure as snow. 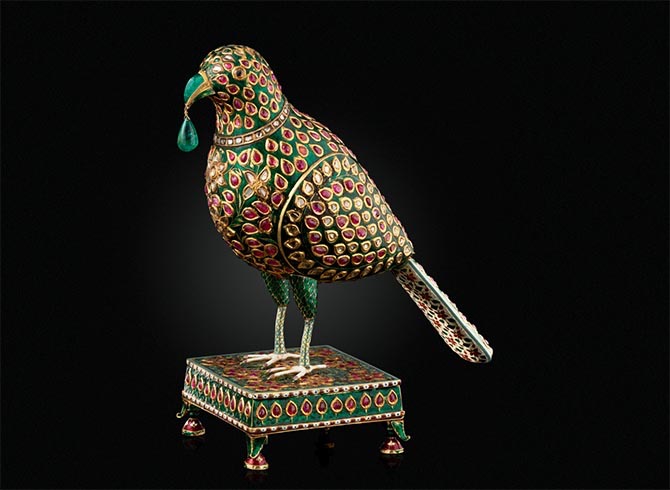 An enameled, diamond, ruby and emerald parrot Hyderabad, Deccan, circa 1775-1825, from the Nizams of Hyderabad collection being sold at Christie’s in the Maharajas & Mughal Magnificence auction. Photo Christie’s

Inside the small darkened room at Christies in New York were just a handful of the 400 pieces that will be included in the June 19th Maharajas & Mughal Magnificence auction. A collection worth tens of millions or more. There was so much to look at. Marvel at. Stand in awe over.

But it wasn’t the value of the pieces that captured my imagination.

As a novelist, when I look at any piece of art or jewelry I see a line of ghosts stretching out behind it. They are all the people whose work went into creating it. All those who owned it. The children who inherited. The auctioneers who oversaw selling it. The thieves who succeeded in stealing it and hiding it away. 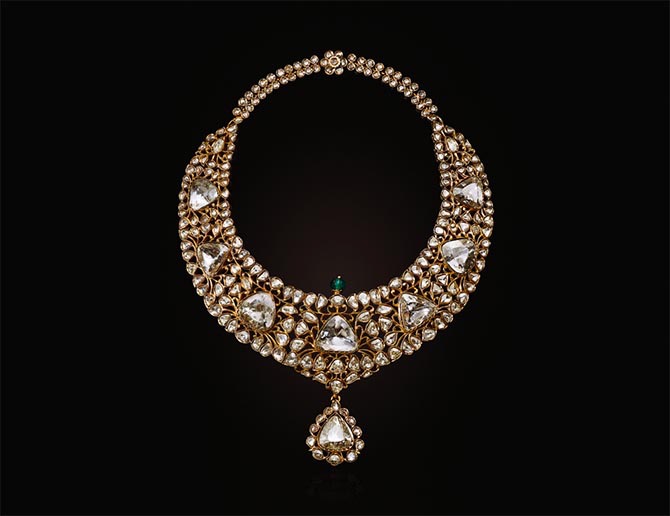 By repute, this necklace, being sold at Christie’s in the Maharajas & Mughal Magnificence sale, belonged to the Nizam of Hyderabad. It is composed of triangular-shaped table-cut diamonds, variously-shaped faceted and rose-cut diamonds, a carved emerald bead, green enamel, foil, gold and was made in the mid-to late 19th century. Photo Christie’s

At Christie’s, I was riveted not just by the opulence and magnificence of the pieces on display but by the untold stories hiding in the shadows. I stood in awe of the ghosts who I imagined watched on as we all came and went and photographed and oohed and aahed and contemplated prices and the preciousness of each of the objects d’art and jewels

While a gemologist might have studied The Nizam of Hyderabad necklace, focusing on the size and carat weight, the clarity and the luminescence of the stones, I wondered about the men who worked in the Golconda mines. Was one of them in the street one day years after discovering those stones just at the moment a nobleman rode by wearing the necklace. Did he know they were very same stones he’d discovered? Was he filled with pride or fury? 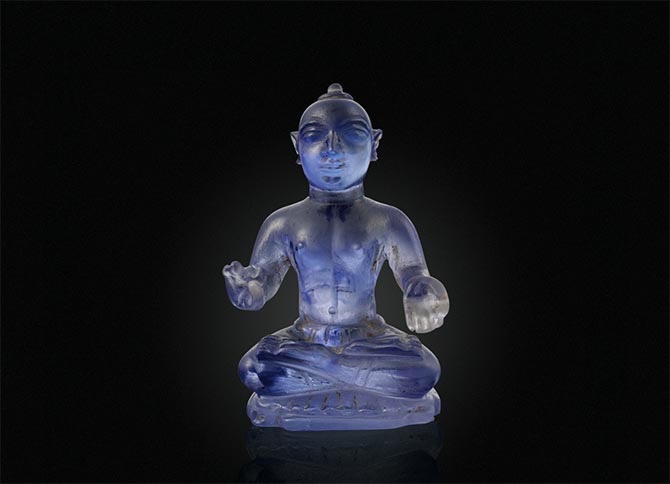 What of the artist who carved one of the smallest pieces, that intrigued me maybe more than any other – an 1-1/8 inch carved sapphire Hindu saint that radiates so much light it almost makes you believe it is imbued with a holy spirit. Did the man who fashioned it out of a 38 carat sapphire wish he could take it home to his little daughter and give it to her to hide and treasure?

Every stone is discovered by a person who loves, hates, has appetites, problems, dreams, and nightmares. Every gem cutter or carver or engraver suffers hardships and illnesses and strife and experiences joys and delights. Every jeweler, designer, every merchant, every collector, owner, every wearer has a tale to tell. But most of these stories are lost to us.

I believe we owe it to those ghosts not to just look at and marvel at the jewels as we wander through auction galleries, museums and shops, as we glance at photos on Instagram and Pinterest, but to stop for a moment when we see something beautiful and honor the spirits of those who gave it shape and design and who brought out or protected its inherent beauty. 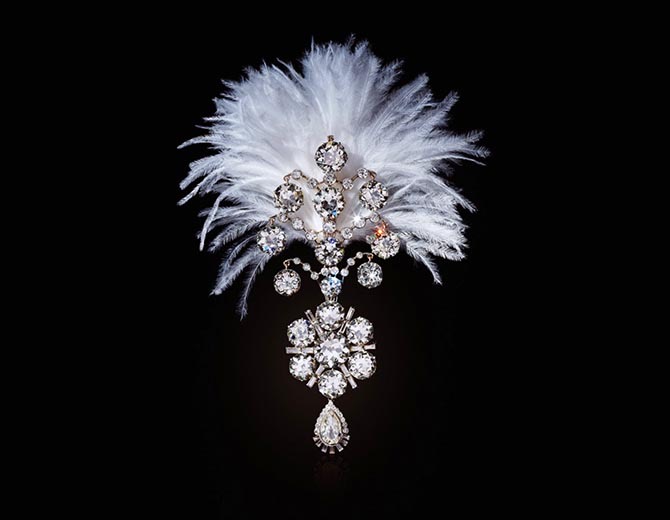 A Belle Époque diamond jigha from the Maharajas & Mughal Magnificence sale at Christie’s. The turban ornament was made in 1907 and is set with old baguette and pear-shaped diamonds in white gold. It is fitted with plume holder on the reverse. The piece was remodeled around 1935. Photo Christie’s

Who Is Sheikh Hamad Al Thani? And Why Is He Selling His Jewelry