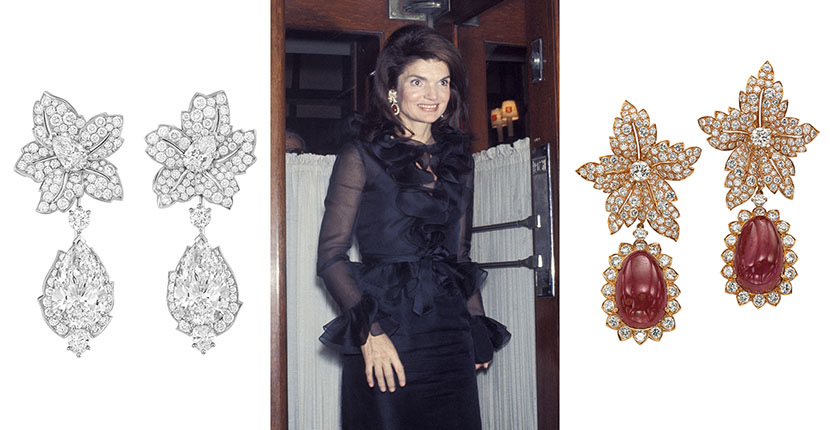 Van Cleef & Arpels almost always delves into their historic archive when they come up with new High Jewelry collections and its easy to understand why. The House has made some of the most romantic and innovative designs in history. Among the many signature looks, there are the Zip necklace, the Jarretière bracelets, the invisible setting and those ballerina brooches.

In the last couple of years, the ballerinas have twirled through the minds of the Van Cleef & Arpels designers and been something of a starting position for new High Jewelry. For the 2018 collection, there were a dozen brooches inspired by the Grimm’s Fairy Tale, The Twelve Dancing Princesses in the High Jewelry collection that debuted in Paris during the July Couture presentations. In 2019, Van Cleef elaborated on the idea of figurative fictional brooches and brought the characters in Shakespeare’s Romeo and Juliet to life in jewels.

This year the fabulous French firm has looked at another area of its history. The remarkable women who were clients and danced, so to speak, on the world stage in their Van Cleef & Arpels creations. The memories of these jewels brought to life by dynamic women—as well as a precious assemblage of some exceptional, diamonds, rubies and emeralds—were the two main luxurious elements that fueled the production of the collection dubbed Homage to High Jewelry in Place Vendôme.

Get the details on each of the pieces and the designs that inspired them below. 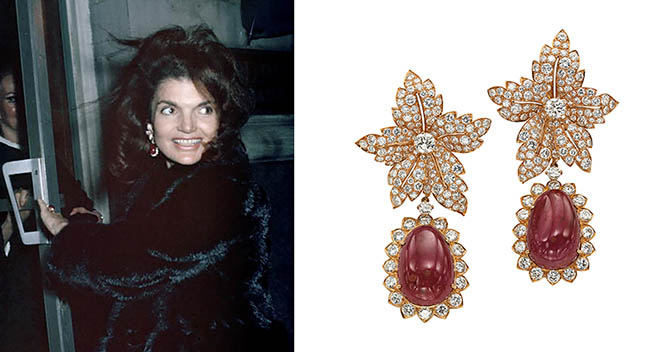 Jackie Kennedy’s cabochon ruby and diamond earclips by Van Cleef & Arpels were a wedding present she received in 1968 from her second husband Aristotle Onassis. The former First Lady clearly loved the jewels. She wore them constantly for a couple of years and intermittently throughout her life.

The leaf design at the top of the jewels was set with approximately 14-carats of diamonds. The pear-shape cabochon ruby pendants weighed a total of around 76-carats. The rubies were detachable and Jackie had other gems she switched them out for on occasion. When the jewels were sold with Kennedy’s estate at Sotheby’s in 1996 the hammer price on the pieces was $325,000. They are currently in a private collection. 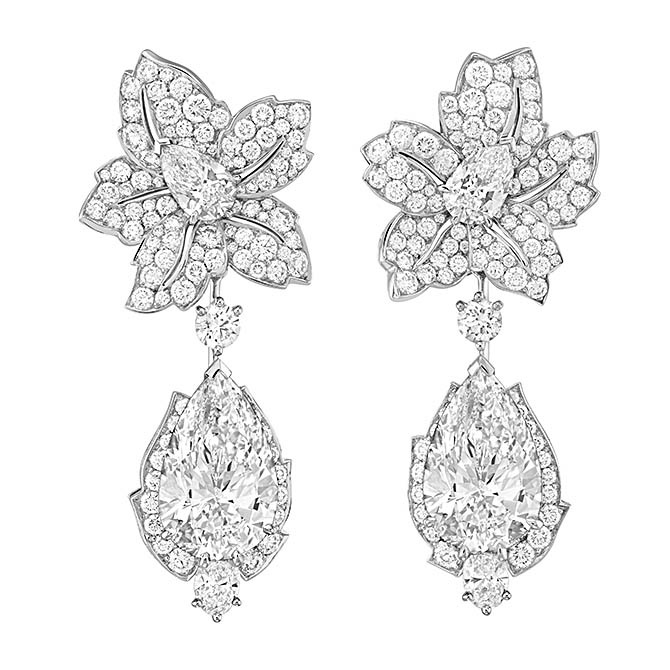 The new rendition of Jackie’s jewels are named Tendresse Étincelante Earrings which translates, Sparkling Tenderness. The design echoes the diamond-set sculptural corolla leaves. They have pendants set with two-pear shaped D-Flawless Type IIa diamonds weighing a total of 20.21 carats. The gems were cut from rough to be set in the jewels which is the height of the High Jewelry today. 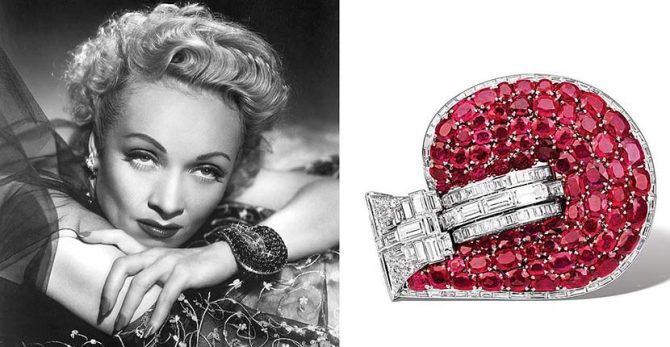 One of the most distinctive jewels in actress Marlene Dietrich’s collection of statement pieces was her Van Cleef & Arpels Jarretière ruby and diamond bracelet. The legendary tale behind the piece is that Louis Arpels, a principal of Van Cleef & Arpels, made the jewel and a coordinated clip brooch for Dietrich in 1937 out of several ruby and diamond jewels she wanted redesigned from her collection. She wore the jewel out on the town in Hollywood and famously flaunted it in Alfred Hitchcock’s 1950 murder mystery Stage Fright. 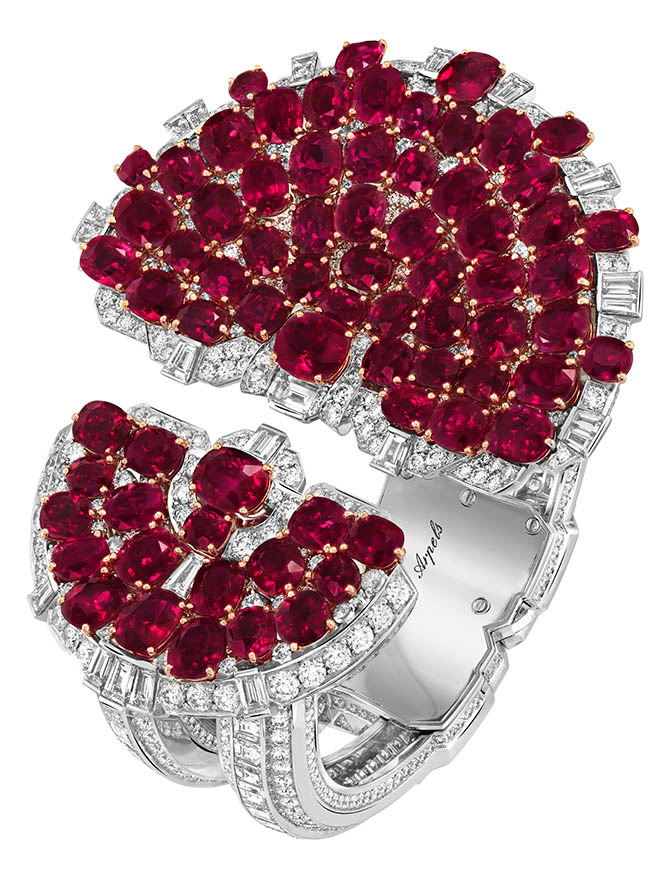 Van Cleef reimagined Dietrich’s treasure in a piece dubbed Rubis en Scène which translates Ruby on Stage. Rather than one half-moon disc the new design has large and small half-moons. They are set with 72 Burmese rubies weighing a total of 84.74-carats. While Dietrich’s bracelet was a flexible strap that hugged the wrist, this piece is a solid cuff. The elaborate cone structure under the rubies in the actress’s piece has been reimagined and modernized in a openwork understructure. 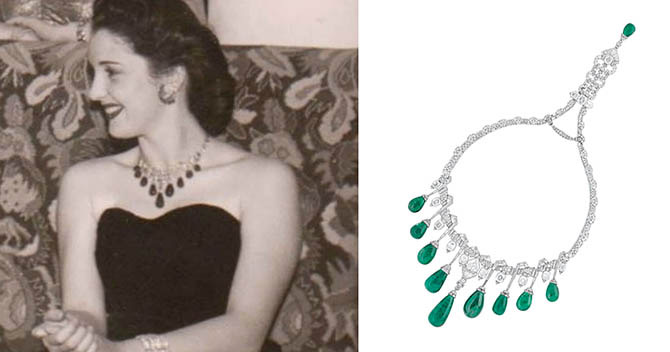 There are not many pictures of the Egyptian Princess Faiza wearing her legendary collaret emerald and diamond necklace made by Van Cleef & Arpels, but fans of High Jewelry are familiar with the design. The piece dating from 1929 was set with 10 drop shaped emeralds suspended from a late Art Deco style necklace with geometric and round diamonds. It was given to Her Royal Highness in 1947. The Van Cleef & Arpels Collection reacquired the jewel to be displayed at exhibitions around the world along with the firm’s other treasures. 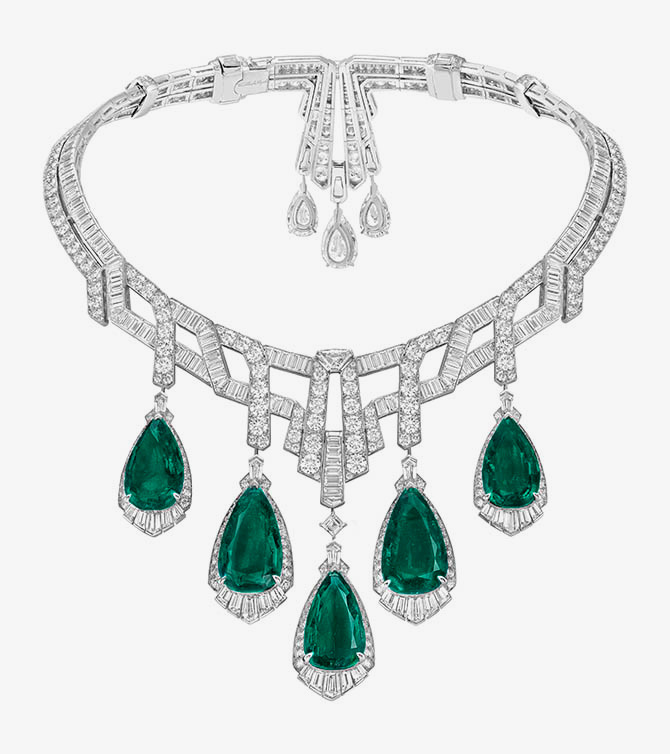 The new jewel inspired by the royal’s treasure is aptly named Merveille d’Émeraudes which translates Marvel of Emeralds. There are five pear-shape emeralds in the jewel that weigh a total of 70.40-carats. The spirit of Art Deco is expressed with an array of baguette cut diamonds that surrounded the emeralds and line the necklace part of the jewel along with round diamonds.

The emeralds can be removed from the necklace to be accompanied or replaced by pear-shaped diamonds (one D Flawless Type IIa weighing 5.81 carats and two D Flawless Type IIa stones weighing 3.59 carats each), which may adorn the clasp. Both the emeralds and the diamonds can also be suspended from the earrings that complete the set, providing one short and two long options with the precious pendants.