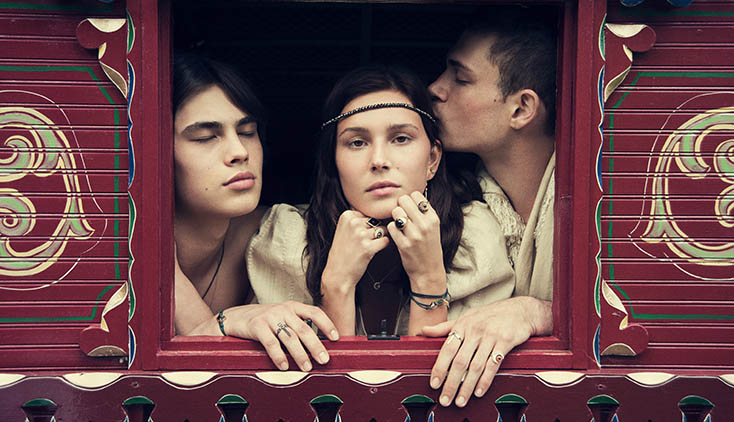 All the models in the campaign for the Kate Moss x Ara Vartanian jewelry collaboration are represented by the Kate Moss Modeling Agency. 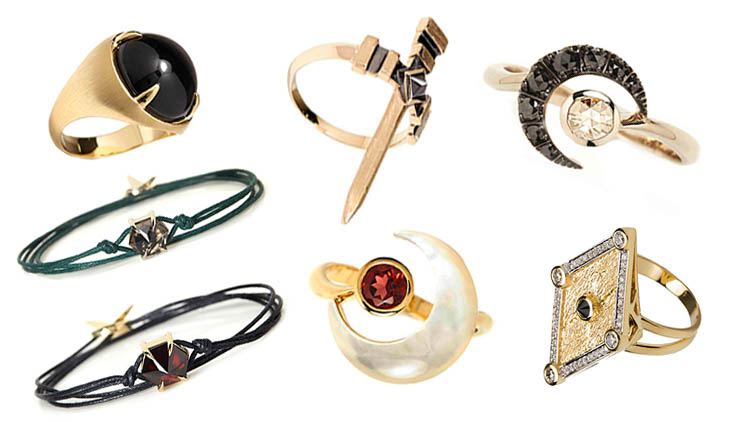 Select pieces from the Kate Moss x Ara Vartanian collaboration. The sword motif was inspired by the legend of St. George and the Dragon. 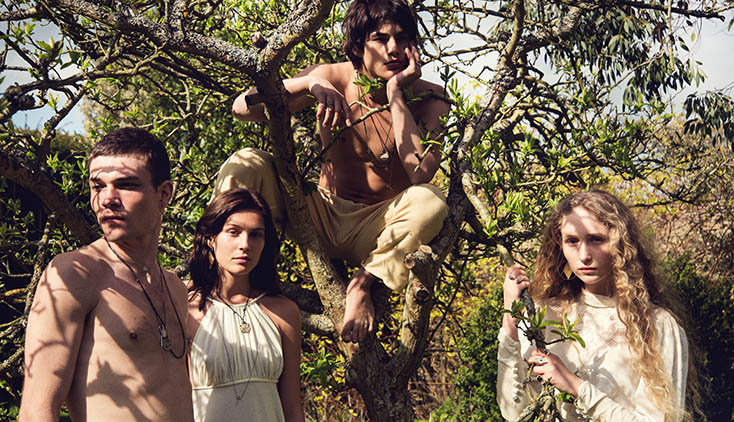 The campaign for the Kate Moss x Ara Vartanian jewelry collaboration was shot at the supermodel's country home in the Cotswolds. 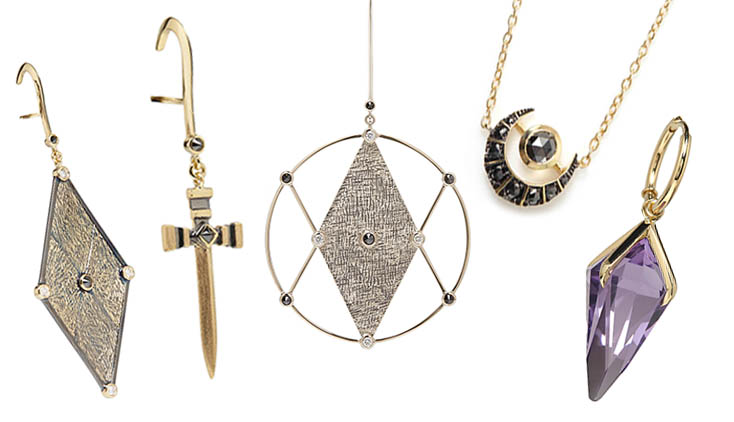 Single earrings and a crescent moon pendant from the Kate Moss x Ara Vartanian collection. Amethyst is one of the supermodel's favorite gems. 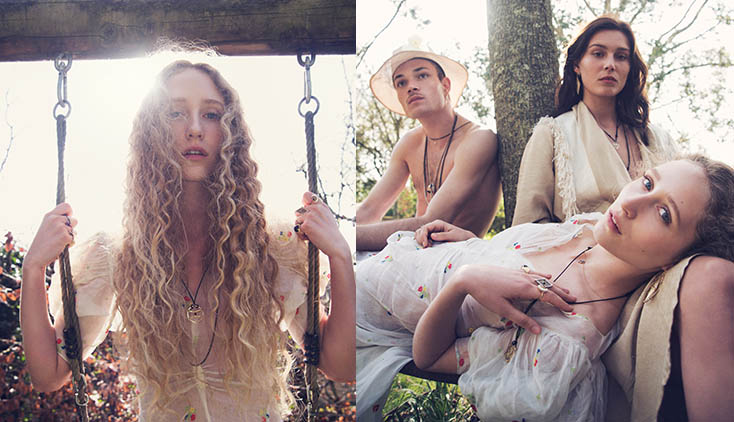 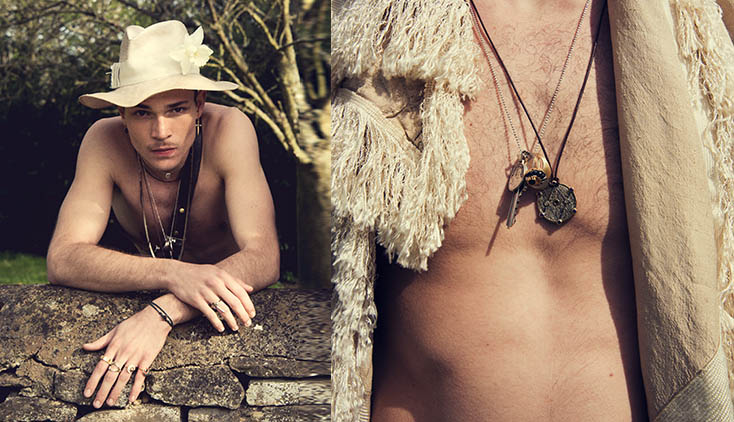 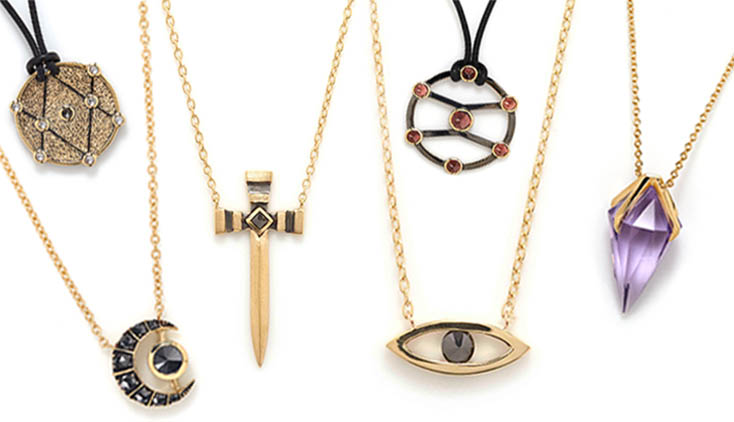 Select necklaces from the Kate Moss x Ara Vartanian collection. There are red garnets throughout the collection because it is the supermodel's birthstone. 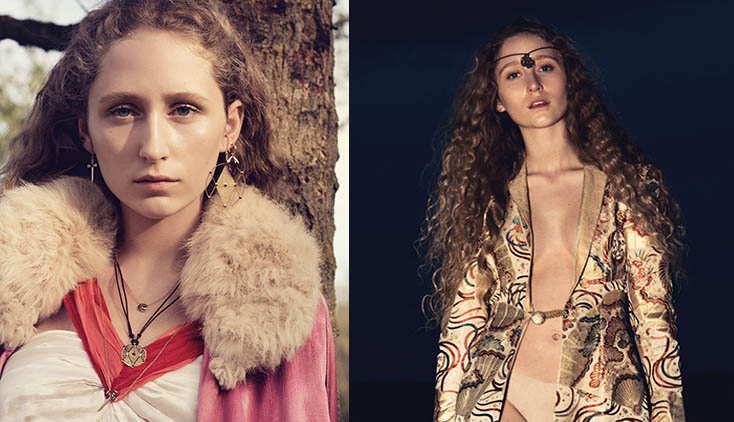 The supermodel infuses her boho spirit into delicate pieces 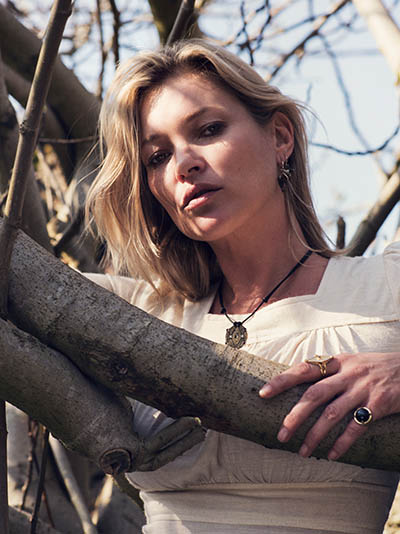 Considering how few interviews Kate Moss has given to the press over her 30-year-long modeling career, it’s amazing how many times jewelry has come up.  “It’s my drug of choice,” she told Vogue in 1997.  She went on to add “Jewelry is eternal.  It never goes out of fashion.  It will always be there.”  When Andre Leon Tally asked her about the bracelet she was wearing in a photo he took of her for his 2005 memoir A.L.T 365+, Moss said, “The diamonds are my own.  I bought them.”  More recently for a behind-the-scenes interview of a 2016 Calvin Klein ad campaign, she replied simply and saucily to the question of what romantic love was useful for—“Diamonds.”

Well, now Moss is talking a blue streak about her long-time passion for jewelry and her new limited edition fine jewelry collaboration with Brazilian designer Ara Vartanian (see photos above).  When the news broke over the weekend in the May 13, 2017 issue of The Daily Telegraph Magazine exclusively, Moss seemed more at ease discussing jewelry than I recall her speaking to any other subject.  Following are a few jewelry quotes from the story:

“I am like a magpie with shiny things; I can’t walk past a jewelry shop without seeing something I love.”

“Nobody wears pairs of earrings any more; it’s old fashioned.  I like to throw on, mix and match earrings.  It’s cooler when it’s not styled much.”

“I love a diamond, obviously, but I am not really one for your traditional white bling.  I love the colored stones—amethyst, citrine and garnet—because I find them more organic.  I feel like they’re a bit more—I don’t know—spiritual; there’s something earthy about them.”

The relationship between Moss and Vartanian runs deep.  From the moment, the 42-year old model stepped into the designer’s São Paulo, Brazil boutique in 2012 she was mesmerized.  She bought a couple of bold pieces including an emerald bracelet.  By 2016, the twosome was not simply hanging out, they vacationed together and Moss convinced Vartanian to open a shop in London.  (See the boutique at 44 Burton place here.)

The KM x AV collection reflects a closeness between the two.  The delicacy of the 18K gold and gem-set pieces is similar to the vintage jewelry Moss loves.  There is also a rock and roll hippie vibe that echoes the way the super model dresses and lives.  Vartanian’s style shines in the hand craftsmanship of the pieces and the colorful semiprecious stones.  He used Kate’s birthstone, red garnet, in the collection as well as one of her favorite gems, amethyst.

The personal quality to the collab extends to the campaign, photographed by Fenton Bailey (seen in the slide show above).  It was shot at Kate Moss’ country house in the Cotswolds and features models from Kate Moss’ new modeling agency.