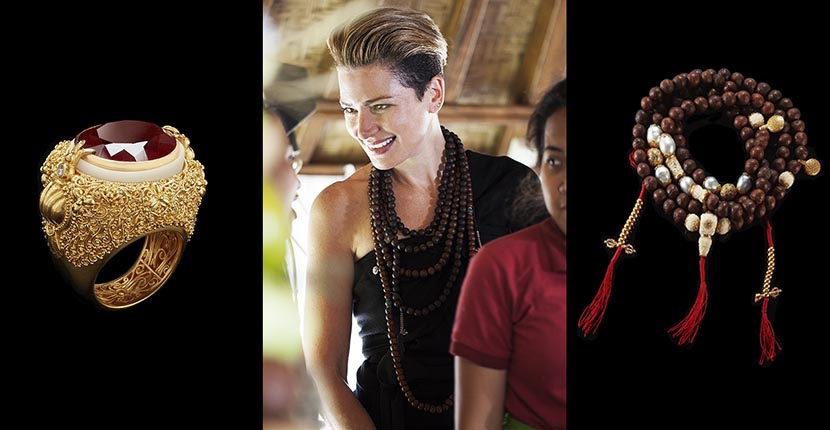 Tagua Seed Jewels to Save The Elephants

Do you know what a Tagua Seed is? No, me neither. At least, I didn’t know until a few weeks ago when Alexandra Mor contacted me to tell me about it.

Tagua is a botanical seed that grows on trees in Peru, Ecuador and Brazil.  Remarkably, it has the same physical characteristics of ivory. Alexandra and a handful of other designers including the 1884 Collection, Coomi, John Hardy, K. Brunini, Sharon Khazzam and Sylva & Cie are beginning to use it in their pieces for a couple of reasons.  They want to raise awareness of the alternative to ivory as well as draw attention to the crisis of tens of thousands of elephants being killed for their tusks every year and the serious concern of extinction. 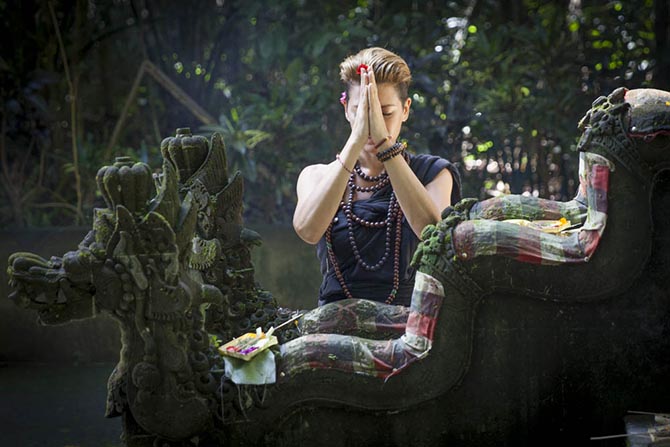 Alexandra Mor collaborated with Ken Kochey on a series of images about her Balinese journey and Tagua Seeds Capsule Collection. The Penglipuran Village, the location in the image, is known for its exceptional preservation of the core Balinese traditions. Photo by Ken Kochey/Sarah Laird Agency

Alexandra, who is based in New York City but in the midst of a two-year creative sabbatical in Bali with her family, began using Tagua after seeing a documentary about the elephant crisis. “Historically, our industry has had a hand in promoting the ivory trade and so today we must actively support stopping it. A planet without elephants is a planet without spirit,” explains Alexandra. “I realize living in this part of the world, however, ivory is an integral part of the jewelry and culture. Rather than just telling people to stop using it to save the elephants, I wanted to present an alternative.” 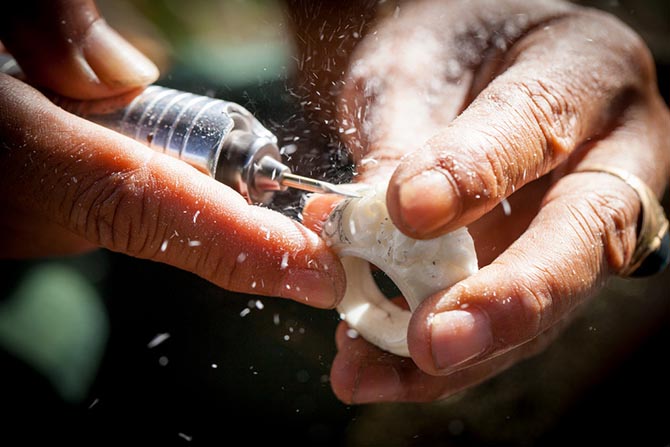 “The intention behind the Tagua Capsule Collection is not to replace my Signature Collection or brand design aesthetics, but rather to use my voice in the industry and among collectors to initiate some important conversations about sustainable mindful luxury,” explains Alexandra.

Read more about the work in her descriptions below. See all of the collection and pieces from other designers using Tagua Seed on 1stDibs.com. 20% of the proceeds to elephant habitat conservation efforts via Mount Kenya Trust. 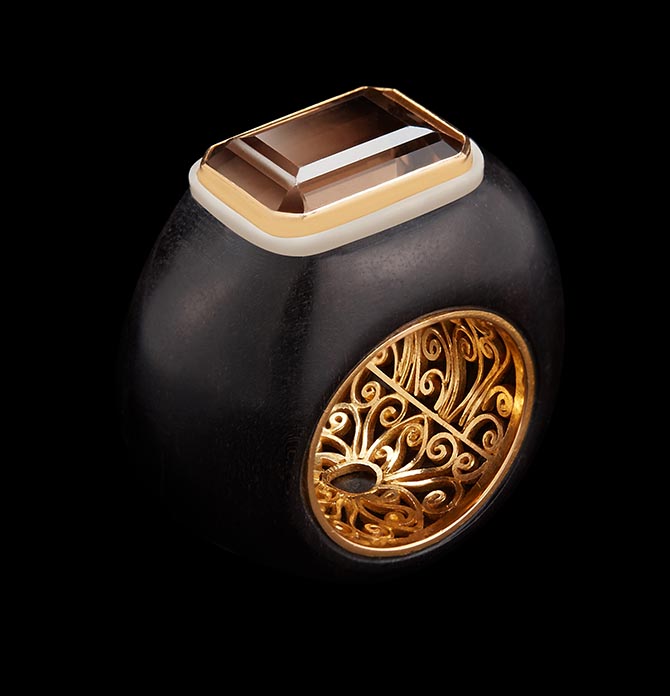 This ring features a 10.55 carat emerald-cut smoky topaz set in a 22 karat gold bezel accented with a carved, wild harvested Tagua Seed basket. Pure white and hard like stone, when carved, the Tagua Seed is nearly identical to ivory. The main body of this ring is made with Areng Ebony wood and is set in 22 karat gold that is handcrafted with a symbolic, ancient Balinese motif and an Alexandra Mor logo gallery. Limited edition of 5. 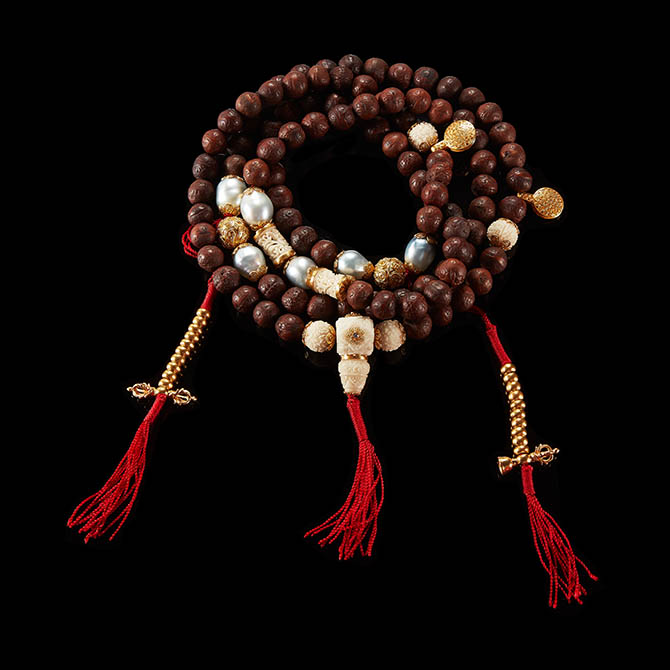 Tagua Seed carved like Rudrakshas beads, primarily used in India and Nepal as beads for malas, are valued similar to semi-precious stones. Mala prayer beads are a traditional tool used to count the number of times a mantra is recited, as well as breaths while meditating, counting prostrations or the repetitions of a Buddha’s name. Malas are typically made with 18, 27, 54 or 108 beads.

The lotus flower has special meaning for Alexandra Mor. Found in temples all over Bali, the Padmasana, or lotus flower is a representation of the cosmos and symbolizes purity of the body, speech, and mind. Rooted in the mud with beautiful and serene flowers that float atop the water’s surface, the lotus form is symbolic of the individual’s attachment and desire while the drops of water that slip easily from its petals are a reminder of detachment.

This jewel is one of a kind. 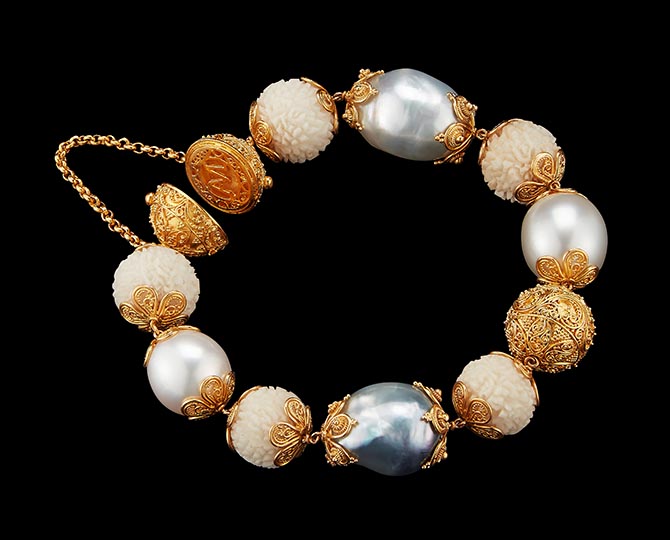 Prolific, internal carvings in 22 karat gold are inspired by the symbolic practices and techniques in ancient Balinese gold work.

This jewels is one of a kind. 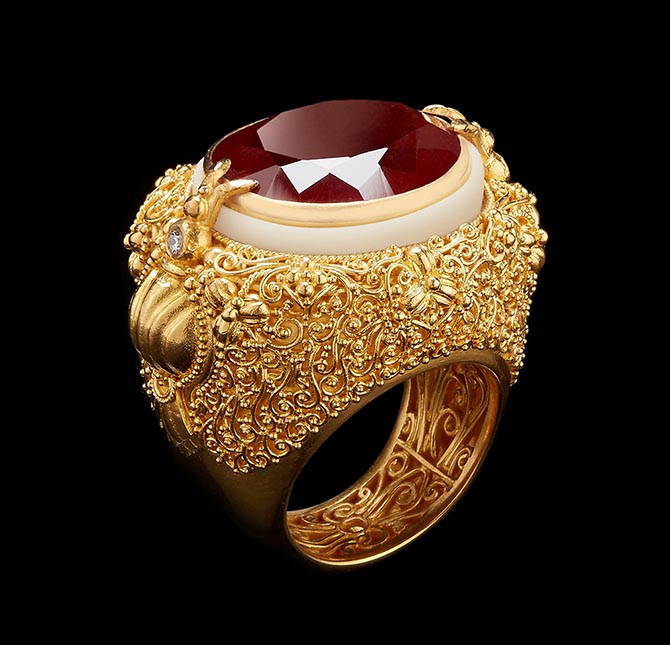 This ring features a 24.40-carat oval-cut rich orange Spessartite Garnet set in a 22 karat gold bezel accented with a carved, wild-harvested Tagua Seed basket. The main body of this ring is made of intricately spun 22 karat gold filigree and is accented with .06 carats of brilliant-cut diamonds. The ring is set on 22 karat yellow gold that is handcrafted with a symbolic, ancient Balinese motif and an Alexandra Mor logo gallery.

The ring is one of a kind.

Select photos in this story were taken by Ken Kochey, an award-winning photographer, who has traveled the globe, capturing experiences through his lens for editorial and advertising clients such as Conde’ Nast Traveler, Travel and Leisure, Aston Martin and Coca Cola. After many years living in New York City, Ken has relocated to Bali with his wife and two children where he continues to specialize in travel and lifestyle photography and is known for the genuine warmth and humanity he brings to his photographs.

Tiffany’s Save The Wild Collection is For a Cause