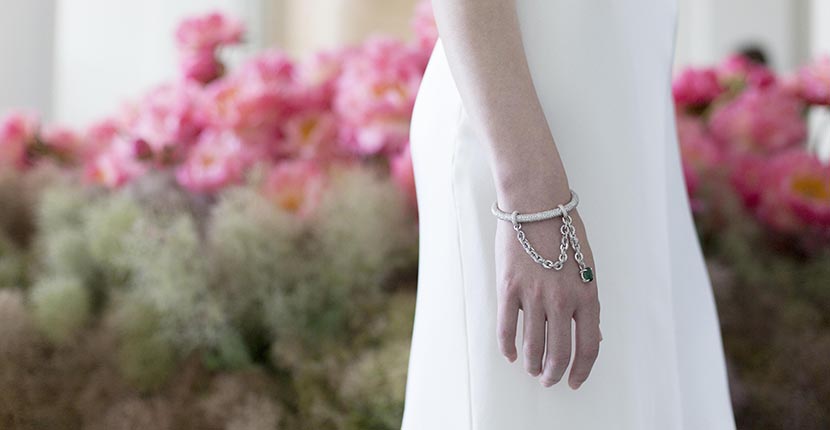 From the moment Ana Khouri launched her collection in 2013, she has had a unique point of view. Her silhouettes have included earrings that wrap from inner ear around the lobe and bracelets that swish across the wrist like a lasso. While the designs may sound as though they are made strictly for millennials, Ana has always had a much broader view of her clientele. She knew there were forward-thinking women of all ages who wanted a new look in jewelry.

One-way Ana has distinguished herself from her contemporaries and established the fact that a certain portion of her collection is in fact High Jewelry—in the truest, one-of-kind, rare sense of the term—is by showing in Paris during the Couture presentations in July. The Brazilian designer who is based in New York began her annual appearances in the City of Lights in 2014. In the last couple years, she has shown in a historic room at the Musée des Arts Décoratifs with black and white marble floors, Doric columns and large windows looking out onto the Tuileries Garden. The models wear dresses Ana has designed herself. It is a comprehensive vision. 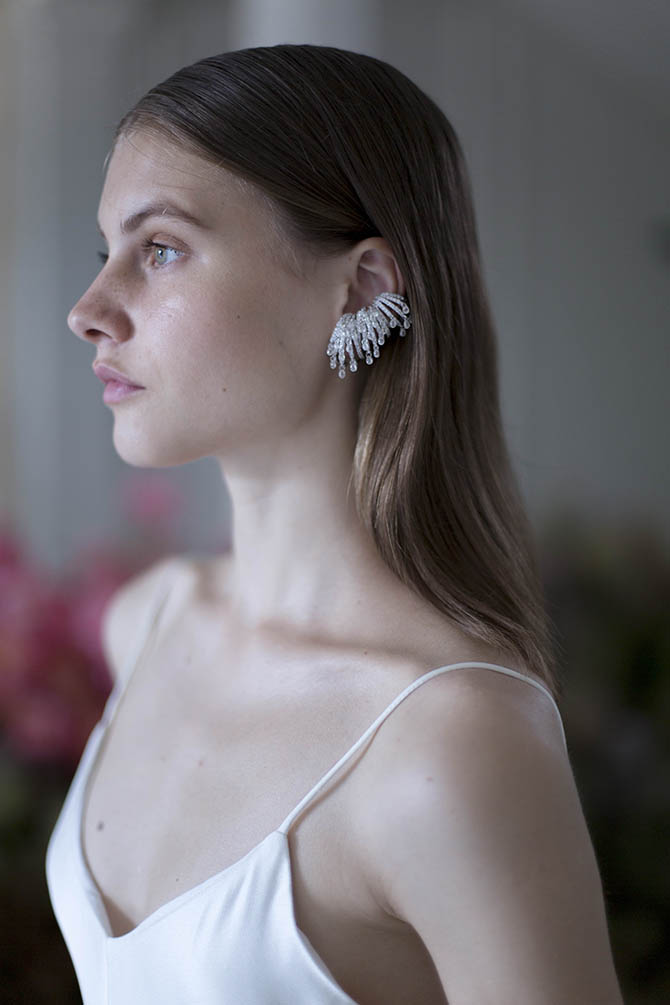 Ana Khouri’s 2019 Harmony collection was her most sophisticated to date. It was at once quieter and bolder in the scale of the pieces than anything she has done previously. The earrings gently hugged half the lobes with dazzling gems. Ana’s diamond rings included rounded pavé covered tubes accented with random gems and organically shaped circles in mixed cuts. An asymmetrical pavé-set diamond necklace opened in the front and ended in two large dew drops of Paraíba tourmalines.

The chains that Ana originally created in sculptures then transformed into earrings last year appeared in two different styles this year. She made an amazing bracelet with the chain elegantly draping down the hand and ending in and eye-popping emerald. The chain was also included in the pièce de résistance of Harmony, a convertible jewel that can be styled as a headpiece or long pendant earrings and a choker necklace. It was at once avant garde and a very wearable jewel.

Diamond and emerald Eva headpiece by Ana Khouri shown on a model in Paris. Photo courtesy

For the Harmony presentation, Ana showed some pieces on male models. When I sat down with the designer to discuss the collection she said people had been asking her to make jewelry for men for ages. With Harmony, she realized several earrings would work on men without changing them at all. She dubbed the work “gender free.”

Like all her collections, Harmony is linked to nature but perhaps a little more so than ever before. To emphasize the association, Ana had flowers shown alongside the models at the Musée des Arts Décoratifs. Beautiful blooms may not sound radical at all, but for a minimalist designer who carefully weighs every single element of her work it was. 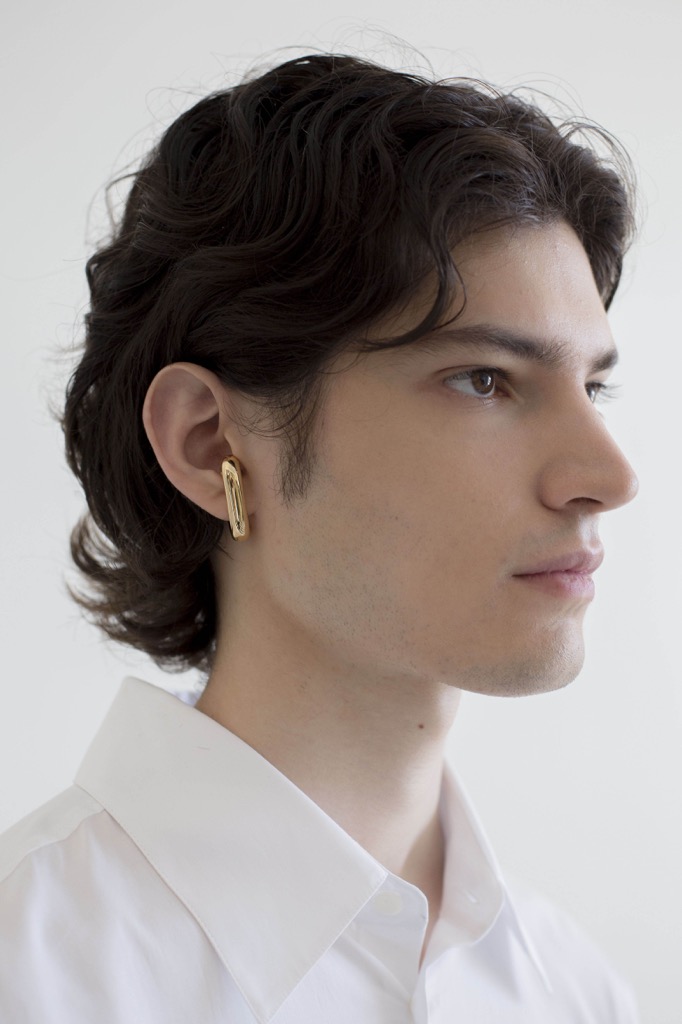 Following is Ana’s thoughtful statement on Harmony and more photos of the astonishing collection.

“Though we have a sense of what the natural world looks and feels like, we have little understanding of where it’s magic comes from. Creating art was once our way of participating in and understanding that magic. It was a way to bring us closer to nature; of striving to reconnect with it. If the mind and hands are our tools, then perhaps the act of making is a process by which the same mystical energy flows.

It may seem odd to say so, considering the scientific and technological abundance we find ourselves in, but the more those pursuits overrun our lives, the more we lose a sense for the connection we have with the world. My own sense of this dissociation is at the root of my desire to reconnect with nature through my work. 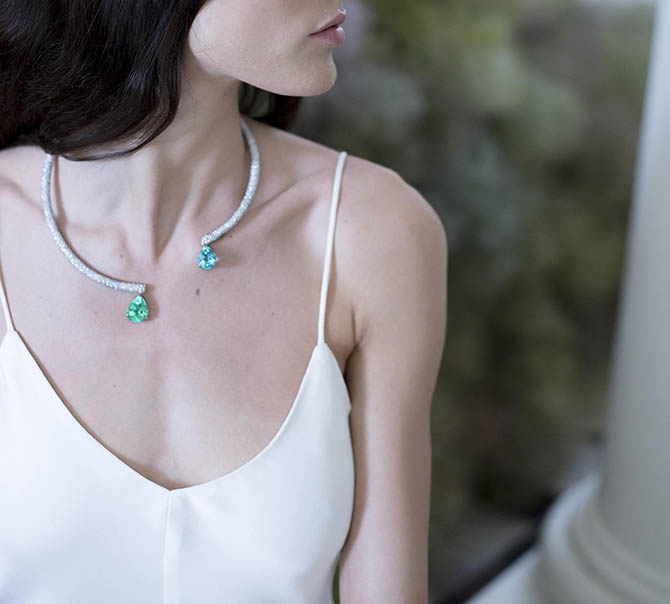 An awareness of that has always been essential to my process, but it’s come to have a special relevance for me. From the beginning, my work has been a way to communicate a sense of harmony—of knowing my place in the world and being fully present within it. It allowed me to see what had been right in front of me, something so fundamental to life but so often muted by man-made distractions—the interconnectedness of all that surrounds us. I hope, in the end, that this work stirs that same feeling of discovery in you. Not only about the process of creativity but about who we are, where we are going and just what we are willing to sacrifice to get there.” 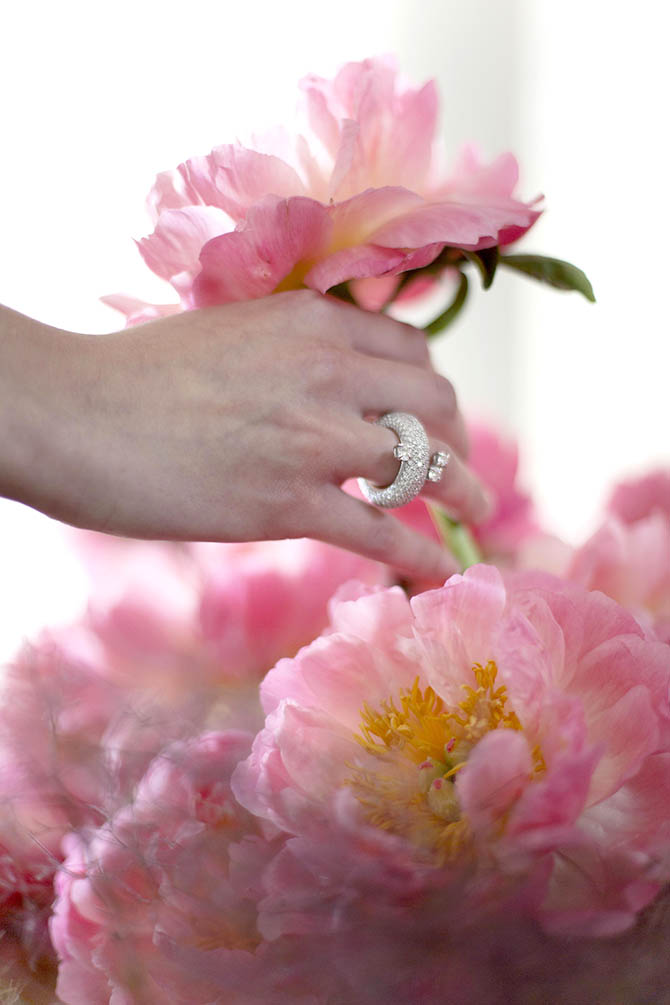 Diamond Phillipa Ring by Ana Khouri shown on a model in Paris. 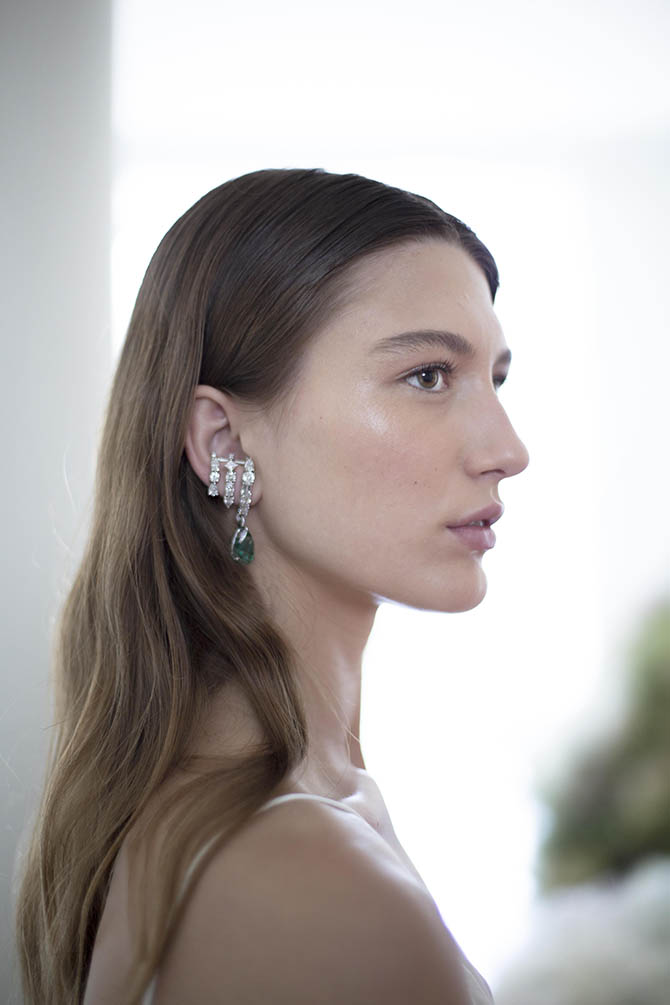 Diamond and emerald Daphne Earring by Ana Khouri shown on a model in Paris. 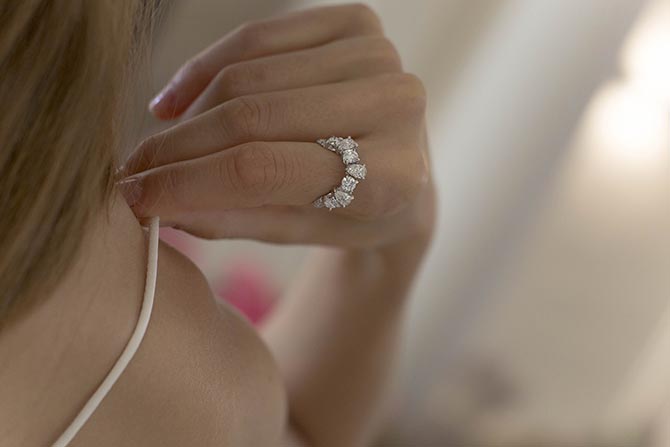 Diamond Eva Ring by Ana Khouri shown on a model in Paris. 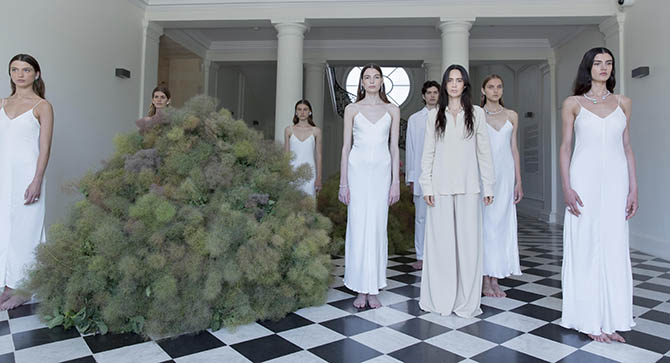 Ana Khouri and the models wearing the Harmony collection at the designer’s presentation in Paris. 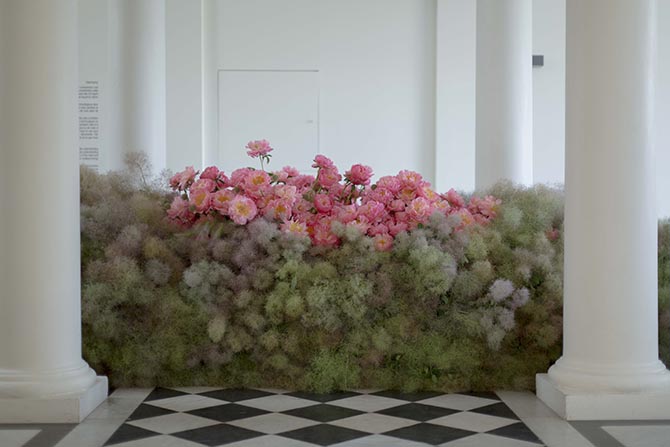 The sculptural flowers shown alongside Ana Khouri’s jewelry in Paris.