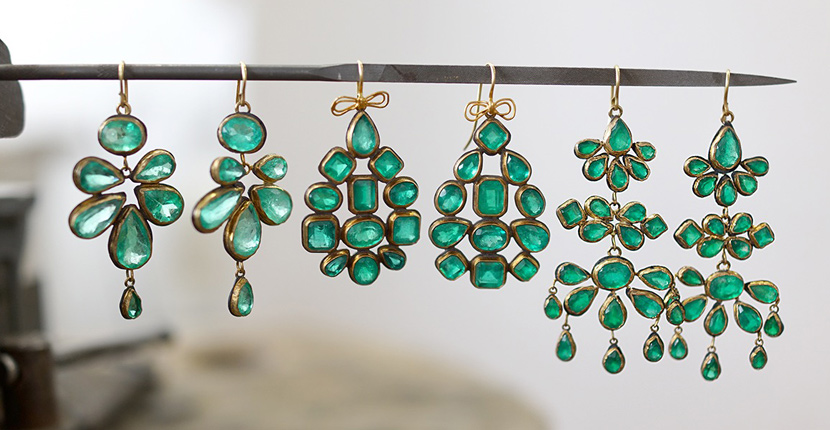 Adventures in Emeralds with Judy Geib

Mild mannered Judy Geib has an elegant demeanor and twinkling eyes that give just a glimpse into her adventurous soul.  Like a female Indiana Jones, she travels the world in search of the perfect gemstones.  For Paraibas, rubies, sapphires, aquamarines, kunzite, pink and green tourmalines, she makes excursions to the wilds of Brazil.  Judy’s favorite place to find emeralds is Colombia.  While the country is safely visited by Americans, the U.S. State Department has an official warning to keep a head’s up for the various dangerous groups there.

Fearless about any obstacles, Judy began taking gem journeys around ten years ago after trying the traditional ways designers acquire stones.  First she attended the annual Tucson Gem & Mineral Fair, but was underwhelmed by the overwhelming environment.  Next Judy arranged one-on-one meetings with a Colombian dealer in New York.  “He was a real character lugging around a backpack full of emeralds,” remembers Judy.  “The first time he came to my studio he was drunk, but I liked him and his inventory.”  Another time the dealer arrived empty handed.  He had been robbed of the emeralds Judy paid for in advance on his way to the airport in Bogota.  “He said he would make it up to me and he did.”

After a few meetings with the dealer, Judy received a call from his wife saying he had passed away.  It was at that moment that Judy made the decision she would go to Colombia for emeralds rather than having the gems brought to her.  Why make the extra effort? 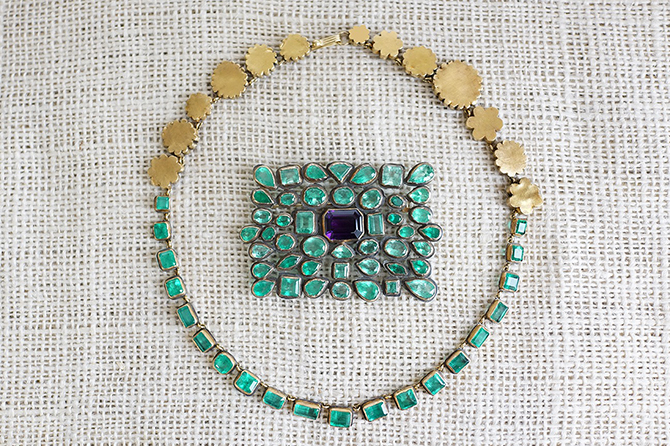 “Emeralds come in a wide range of colors,” explains Judy. “I knew what was being brought to New York was only a fraction of what was available and I wanted to see all of it.”  She dismisses the dangers of traveling alone in Colombia as a colorful part of the experience.  “The first time I went I was on an extremely limited budget and booked a very cheap hotel that I didn’t realize until nightfall was in the middle of the red light district.”  More recently Judy was mugged of her wedding band at knifepoint while she was taking a walk after enjoying a swim in the city’s Olympic sized pool.  “I still had a long way to go after the experience and wasn’t sure what to do until I saw a man guide-walking a blind man.  I told them what happened in Spanish and asked if I could join them.  After awhile the man who could see had to go in a different direction and I walked the blind man and spoke with him until we reached his church.  It was a life affirming little journey that counterbalanced the theft.”

As for the actual buying of emeralds in Colombia, Judy works directly with her dealer’s widow and hires her to go to other buying sessions as an interpreter.  “She’s great, and she understands me completely.  She knows that I want the unexpected. She tries to help me get the practical as well as the impractical.”  Judy buys emeralds individually, hand selecting each stone and she buys groups reviewing the entire parcel. 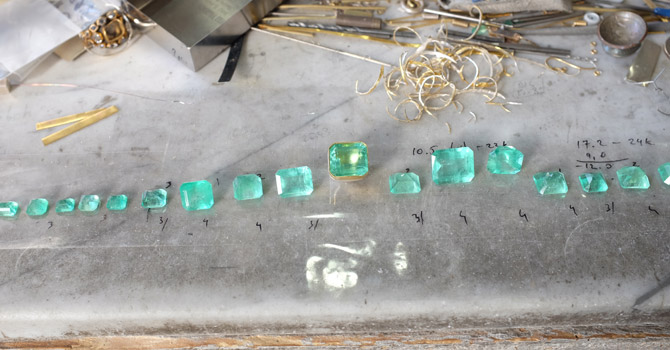 Emeralds lined up on the bench in Judy Geib’s studio.

Judy traces her rock hound tendencies back to childhood.  Growing up in Pennsylvania, she collected minerals on mountain hikes, and sometimes while digging in her backyard.  Her passion for stones grew when her backyard became Brazil where her family lived for a period while Judy was a teenager.  After studying fine art and working as a book designer, she realized she wanted to pursue her passion for the arts and gems and started to design and create her own fine jewels—manufacturing them herself.

A rare combination of talents, Judy taught herself how to manufacture after reading Jewelry Making for Schools, Tradesmen, Craftsmen by Murray Bovin. In 2002 she launched her first collection of pieces at Barney’s in New York.  Her distinctive style is elegantly bohemian with lyrical gold settings highlighted by large gems—particularly emeralds. Judy’s work instantly broke the traditional mold of using emeralds in the formal manner of pieces like the 1960s Bulgari styles in Elizabeth Taylor’s collection.   “I think that is one of the reasons I started making jewelry,” says Judy.  “I wanted things that were fabulous but didn’t make you feel like a show off when wearing it out.” 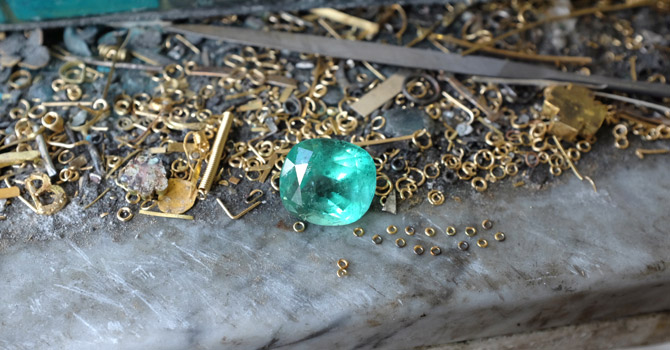 An emerald on the workbench in Judy Geib’s studio.

Judy mounts emeralds in yellow gold.  Almost all of her pieces have oxidized silver on the back, a nod to 19th century jewelry. “I like early work, and I like it to not be too gold.”  The range of her emerald creations goes from chic cabochon studs set in hammered yellow gold with a halo of enamel to large and sumptuous chandelier earrings and rivière necklaces.

Similar in spirit to the renowned French jewelry designer Suzanne Belperron who flourished during the thirties and forties and is highly regarded as one of the most artistic talents to have ever worked in the field.  Judy strongly believes in her own imaginative ideas, “I find it’s good not to know too much about what everybody else is doing, and what is going on, because you have to try and go down your own path.”  Both women view stones with an appreciation that few have the courage to possess, finding beauty in gems that others overlook then transforming them into designs that are impossible not to notice. 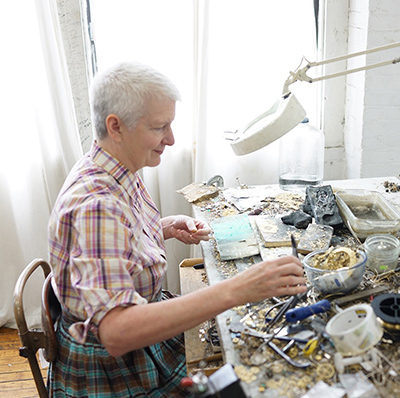 Judy Geib working on jewels in her New York studio.

While color and light are of utmost importance to Judy in emeralds, she’s not as necessarily concerned about clarity, explaining “The darker emeralds are more expensive, but I prefer them lighter because I think they look more wearable.  The dark ones get very formal.  I like to try and find the clearest ones I can find, and if that means they have some flaws in them, that’s okay because I love the brightness.  Cloudiness can make them show more color.  When they’re cloudier, they can be very pale and they still show a lot of color.  They all share something in common: a chromatic and evanescent glow that seems almost like a bright light literally emanating from within.”

When asked if she believes in the magical powers of gemstones, Judy confessed “I love feeling good when you’re wearing something, but I don’t know if it’s due to the power of gemstones.  I can’t really say I believe in that.  But I love that you can wear something, feel good, and it gives you strength.”   For me the magic was present in the emeralds and the jewels.  When I interviewed Judy I had a bit of a cold.  The sniffles disappeared the second the gracious designer gave me the opportunity to try on a pair of her emerald earrings set with two large gems weighing almost 39-carats in total.  They immediately made me feel alive, and healthier than ever before.  The power of the gemstones even made me understand Judy’s courage to travel to Colombia to collect just the right gems.

Take a Deep Dive Into Paraíba Tourmalines with Sharon Khazzam