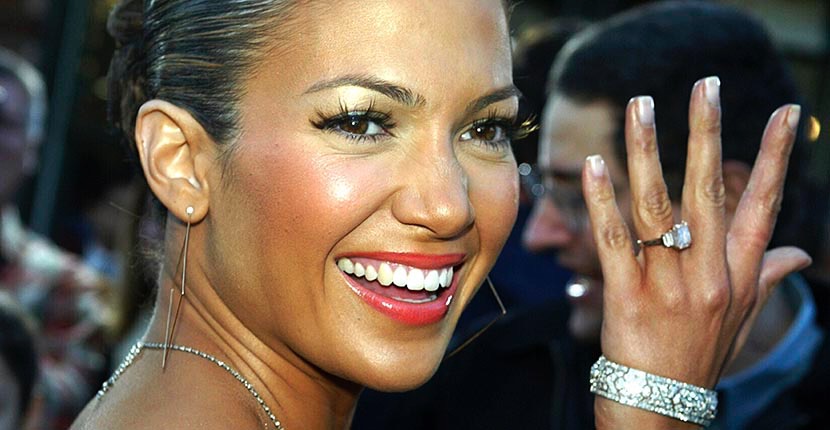 Jennifer Lopez shows fans her pink diamond engagement ring as she arrives at the premiere of "Daredevil" at the Village Theatre on February 9, 2003 in Los Angeles. Photo Getty

March 15, 2019—The stunning and substantial emerald-cut diamond engagement ring Jennifer Lopez received from Alex Rodriguez broke the internet when the couple posted it March 9, 2019 on their individual Instagram accounts. All the excitement sent my mind reeling back to 2002. Years before the social media app was invented, another one of J. Lo’s engagement rings made headline news. There was massive media attention when the world found out Ben Affleck proposed to Jennifer with a pink diamond engagement ring. The fixation on the blush colored stone transformed the course of jewelry history, but I am getting ahead of myself.

First, let’s go back to the days of the early aughts when Ben and Jen fell in love while they were filming the flop, Gigli. At some point early on, Ben and Jennifer became known as “Bennifer.” According to Wikipedia, they were the first celebrity power couple to receive a nickname blending their names.

Lopez announced the couple’s engagement during an ABC Primetime: Special Edition interview with Diane Sawyer on November 13, 2002. Yes, during primetime. And yes, interviewed by Diane Sawyer.

For the show, Lopez went into a lot of detail about the surprise proposal at Affleck’s parents’ house in Boston. “And he opens the door and it is just a blanket. A quilt of rose petals all over the whole, entire house. And just everything was just so, so many candles and vases with bouquets. And my song ‘Glad’ was playing.”

After reading a love letter, he asked her to marry him and showed her the 6.1-carat radiant-cut fancy intense pink diamond with two trapezoid white diamond sides stones mounted in platinum and 18K pink gold from Harry Winston. When Jennifer saw the jewel, she told Diane, “But I didn’t want to look at the ring because I could tell it was pink. And I was just like, oh, God, it can’t be pink on top of it.”

In the end, the public attention proved to be too much for Bennifer. Days before their September 14, 2003 wedding, the couple called it quits. The fact that they never met at the altar didn’t diminish the new found fascination with pink diamonds. The couple launched pinks into the consciousness of the public and the hearts of well-heeled rock hounds.

It may seem hard to believe in the pink diamond-loving world we live in now, but before Bennifer lots of people didn’t know or totally believe there was such a thing as a pink diamond. The gem didn’t really have a public profile despite the fact that pink diamond jewelry was being made by high-end designers at the time of the couple’s romance.

The period marked the first moment in history small pink diamonds were being steadily found. The pretty little pink gems, that were coming out of the Argyle mines in Australia, inspired the first wave of pavé-set pink diamond jewelry ever made. Previously there were not enough stones on the market available to pavé. Gem dealer and jewelry designer, Ralph Esmerian was among the select few who worked with the gems. One of his most dazzling pieces was a magnificent pink diamond brooch depicting a flamingo mother and child standing in grass composed of demantoid garnets. The piece was in homage to the Duchess of Windsor’s famous flamingo brooch by Cartier. The London based jeweler Laurence Graff also made pieces pavéd with pink diamonds including a brooch with two embracing Koala bears. The animals were a tribute to the fact that the gems were from Australia.

Before the Bennifer pink diamond ring brought the gem out in the open, only a few large pink diamonds had been publically known. The stories of the big historic pinks read like a Who’s Who of merchants, explorers and royalty. One of the oldest known large pink stones is the 19.07-carat square brilliant light pink diamond ‘Grand Mazarin,’ Cardinal Mazarin gave Louis XIV in 1661. The gem was sold with the French Crown Jewels in 1887. The flawless 23.6-carat Williamson Pink diamond given to Queen Elizabeth II during the mid-century is another famous pink. It was mounted in a white diamond daffodil Cartier brooch and worn by the monarch to the 1981 wedding of Prince Charles and Lady Diana. In the United States, where the exhibition halls of museums replace the treasuries of royalty, Harry Winston introduced the 12.03-carat Martian Pink at the 1976 opening of the Gem and Mineral Hall of the American Museum of Natural History in New York. The diamond’s name celebrated the successful landing of a scientific probe on Mars.

After Bennifer, pink diamonds have become one of the hottest items for elite collectors looking for big time treasure. When there is that kind of desire, pink diamonds are pulled out of vaults and put up at auction. The Grand Mazarin and Martian Pink made their way to sale in the last several years. The gems sold for $14,461,250 and $17,395,728 respectively. There have been a handful of other gems that have also reached such heights.

Then just last November, the price for pinks went through the roof. The Oppenheimers, the family behind the DeBeers diamond company, put an 18.96-carat fancy vivid pink gem, named the Legacy Pink, on the auction block at Christie’s in Geneva. Harry Winston bought it for an eye-popping $50-million. It seems fitting that Winston acquired the stone since the company played such a big role in bringing pinks to a wider audience.

If you are wondering if this kind of auction action would be happening even if Ben and Jen had not made pink diamonds famous? I think it’s safe to say, it would not. If you look at the big pink diamond sales they all occurred after their high profile engagement.

What Did Alfred Hitchcock Have To Do With Grace Kelly’s Engagement Ring?