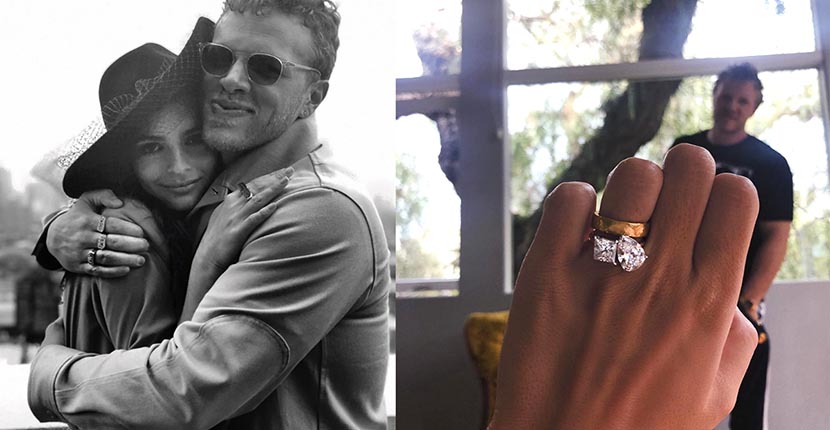 Who Made Emily Ratajkowski’s Engagement Ring?

“Square-cut or pear-shape, these rocks don’t lose their shape!” This verse from Marilyn Monroe’s anthem “Diamonds Are a Girl’s Best Friend” is stuck in my head now that I have seen Emily Ratajokowski’s engagement ring set with gigantic square princess-cut and pear-shape diamonds on a gold band. She revealed the jewel on Instagram, as social media stars do. She didn’t give any additional details on the design, because social media stars don’t. She only added a ✨ to the caption. These facts add up to one action—a jewelry investigation!

First, it seems Emily just received the ring from her husband Sebastian Bear-Mcclard who she married on February 23, 2018, after only a few weeks dating. The engagement ring looks custom made and it’s quite possible it took time to source the stones, design and craft the jewel. The question is who created it? 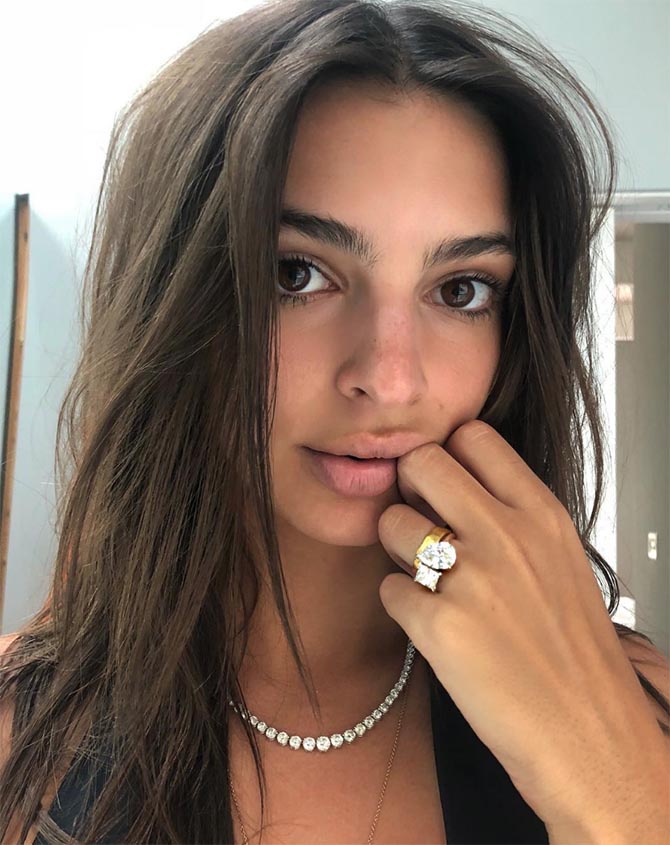 Emily Ratajkowski posing with her engagement ring and a diamond necklace. Photo via @emrata/Instagram

Since the court house wedding Emrata and her husband have been wearing matching gold wedding bands. They bought the gold for the rings in Manhattan’s Chinatown. Don’t ask me where they found gold in Chinatown. The fact is they did. Emily told Jimmy Fallon during an appearance on the Tonight Show, they took the metal to an “Israel jeweler after-hours” and worked with him to shape the wedding bands using a torch and hammer. It was a DIY approach that made the pieces personal. She did not name the name of the Israel jeweler and it is quite possible the couple returned to the same jeweler for the engagement ring.

Then again Emily and Sebastian could have gone to any number of other jewelers who she knows and loves. Walking it back to a few years ago, Emily appeared in Jacquie Aiche’s look book campaign. Emily wears Jacquie’s jewels to this day and Jacquie has created engagement rings for friends including Chrissy Teigen. So Jacquie is one possible candidate.

Emily loves jewels and told me as much when I met her briefly at the wedding of her friends and mine, designers Yves Spinelli and Dwyer Kilcollin. She said she usually thinks of jewelry before her outfit. Like any jewelry-loving woman, she said she builds around her favorite pieces.

Speaking of Spinelli and Kilcollin, Emily collaborated on a collection with the designers this year that includes engagement rings! I don’t think, however, the design trio created the ring because it doesn’t have the signature multiple bands that appear on SK pieces. But you never know, they might have made an exception to the rule for their friend. 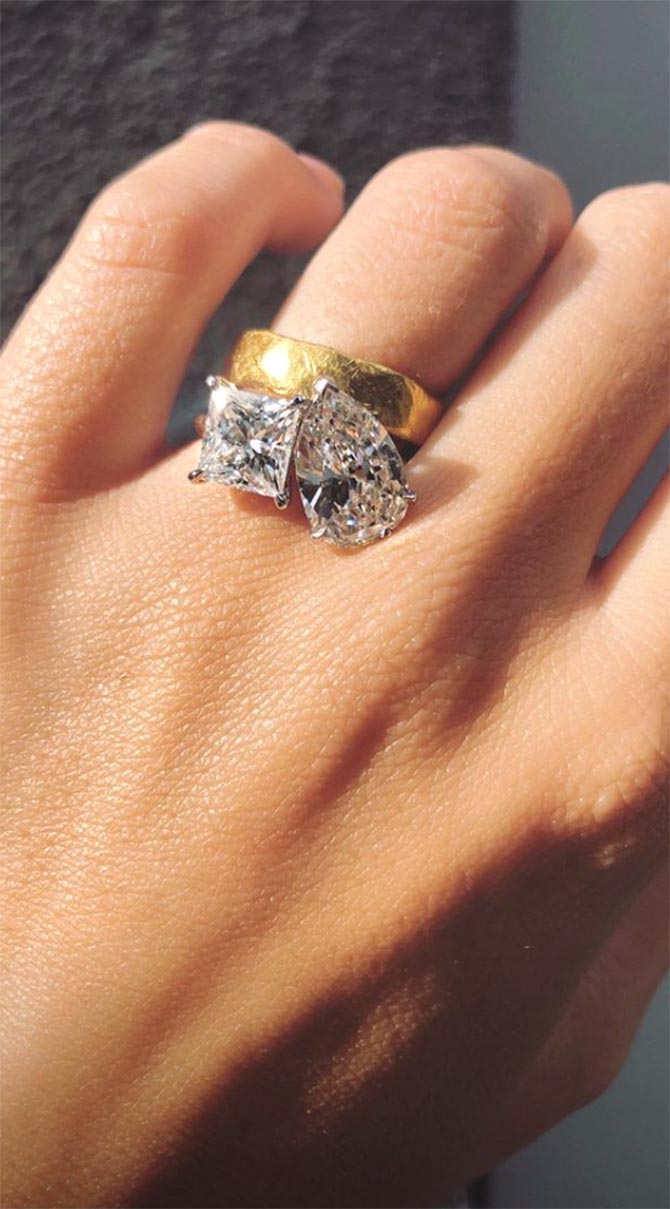 Emily also appeared in Alison Lou’s campaign for her wildly popular Loucite hoop earring collection this year. Alison has made custom engagement rings for clients with pretty major diamonds. It’s a look the designer has dubbed “I do by Lou.” Honestly, I am not going to say “I don’t” to this candidate as designer for the ring. It is possible Alison created the piece.

Others on Emily’s long list of beloved jewelry designers include Jennifer Fisher, Jennifer Meyer and Foundrae. She has worn Messika and explored the collection at FD Gallery. Any one of them could have created the ring. Yet, if I really have to go out on a limb and guess, I am going to say it was made by a jeweler who probably has less of a big reputation. Just like the wedding bands, the couple might have gone off on their own and found someone to create the jewel. One thing is crystal clear, however, from the social media star. She agrees with Marilyn Monroe’s anthem and obviously feels, “Diamonds Are A Girl’s Best Friend.”

UPDATED: Emily shared with Vogue.com she worked on the design with her husband and went through some “50 sketches” in the process. The story says she “employed her friend Alison Chemla, the jewelry designer behind Alison Lou, to help with finding the right setting.” I am not clear on what that statement means exactly, since it was a custom-made piece. It seems to imply Emily and Sebastian designed the jewel together and asked Alison to handle the manufacturing. Emily also states in the story that her husband is familiar with gems because he has been developing a movie titled Uncut Gems starring Adam Sandler. The plot centers around the diamond district.