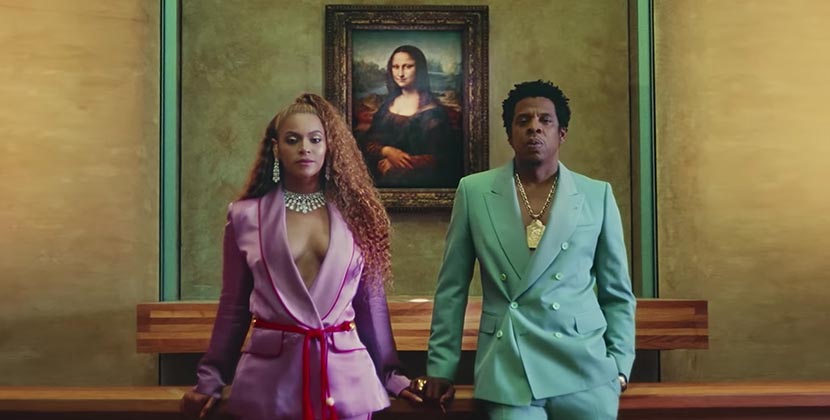 The couple is decked out in diamonds and gold

Just a few of days ago, I was musing on how the British Royal Family clearly enjoys surprising us with things like the tiara Meghan wore for her wedding that no one saw coming. They also dole out a little sartorial information often leaving off the jewelry details and sending this, and many other journalists, off to write think pieces on what it all might mean.

Well, the royal family’s taste for intrigue is modest compared to Beyoncé and Jay-Z. The power couple, who recently kicked-off their On The Run II tour, dropped their first cooperative album, Everything Is Love, and a video, “Apeshit,” on Saturday night. It is filled with all kinds of coded messages.

Jay-Z with Beyoncé in Messika diamonds at the Louvre in their “Apeshit” video. Photo Giphy

The song for the visual element says a lot about personal topics and headline news, but in a way where you really have to listen to the lyrics and know the on-going issues they are interested in to truly understand it. Allegorical meaning was added with the art featured at the Louvre. Yes, that Louvre. Masterpieces in the video include the Mona Lisa, the Winged Victory of Samothrace, The Raft of the Medusa and The Coronation of Napoleon. Other more obscure paintings in “Apeshit” sent experts to the history books to explain the symbolism in connection with the song. 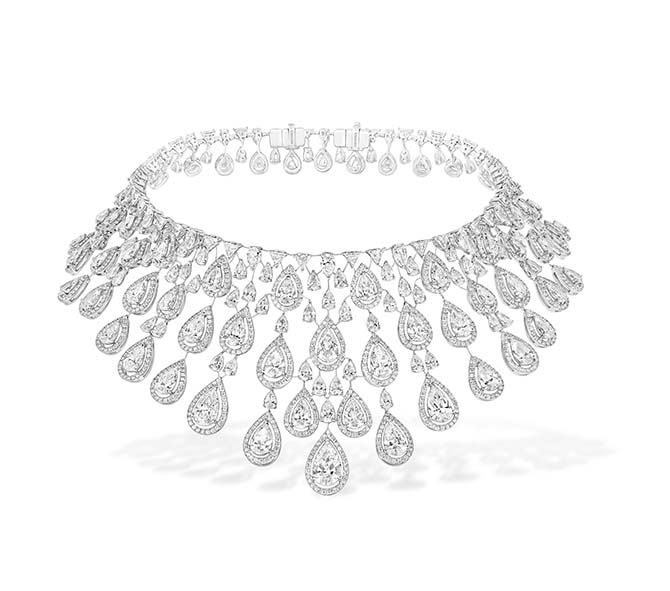 “Look at my jewelry I’m lethal,” one of Beyoncé’s lines in the song pretty well sums up the jewelry situation. A diamond demi suite of earrings and a necklace by Messika are her main pieces in the video. Gems in the necklace total just over 71-carats and include 213 pear-shape gems. The first time she wears the French jeweler’s Persian Drop designs in front of the Mona Lisa her stylist Zerina Akers paired them with a Peter Pilotto pink suit.

Jay Z’s stylist June Ambrose put together major statement looks to go with his Givenchy, Dries van Noten and Alexander McQueen suits. One of the chains looks like a Gucci x Dapper Dan necklace. Jay put on his own Cartier Panther ring for the bit when he is in front of the Mona Lisa with Beyoncé. It’s possible he also wears a Patek Philippe or Richard Mille watch or one from both. The luxurious Swiss brands are name checked in the song.

Beyoncé wears the Messika diamond jewels in this section of “Apes**t.” Photo Giphy

Beyoncé wears the Messika diamonds again with Burberry leggings and a bralet when she appears with dancers in front of The Coronation of Napoleon. In a vignette at the Louvre Pyramid, Beyoncé has on the earrings with gold necklaces. 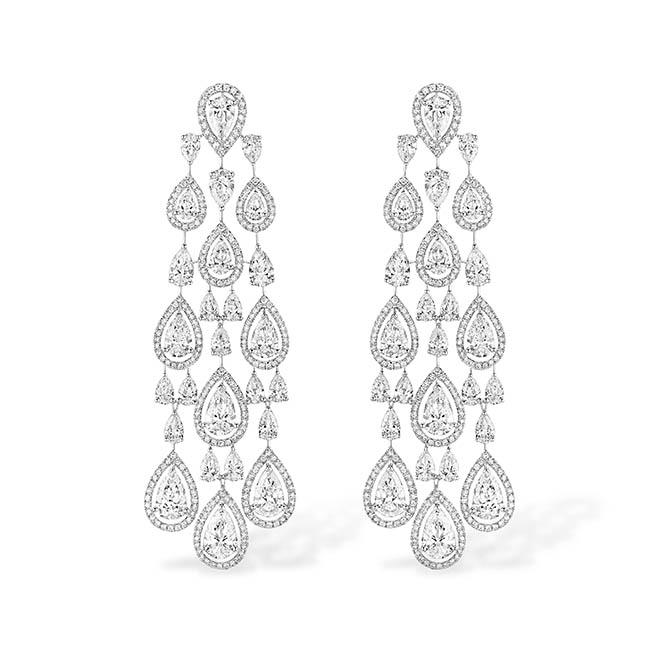 While seated with Jay-Z in one of the Louvre galleries, Beyoncé sports gold cross chandelier earrings by Rinaldy Yunardi  with her Versace ensemble.

Jay-Z with Beyoncé who is wearing Versace in a gallery of the Louvre. Photo Giphy

The references in the video go on and on and have kept journalists working through the weekend to try and decode them. There are jewels in the video I hope to get more information about. One example is the epic engagement ring Beyoncé is wearing in several segments. Her original engagement ring from Jay-Z is a stunner and substantial. This one seems a little bit different. Could it be a new ring to represent their renewed relationship?

There is a metaphor to her engagement ring in the lyrics of another song on the album pointed out by Ismael Khan at Ishy Antiques. Jay-Z raps the marriage meme “He went to Jared” and then adds “I went to JAR in Paris,” name checking one of the most exclusive jewelry designers in the world. A line to which Queen Bey replies, “Yeah, you fucked up the first stone. We had to get remarried.” 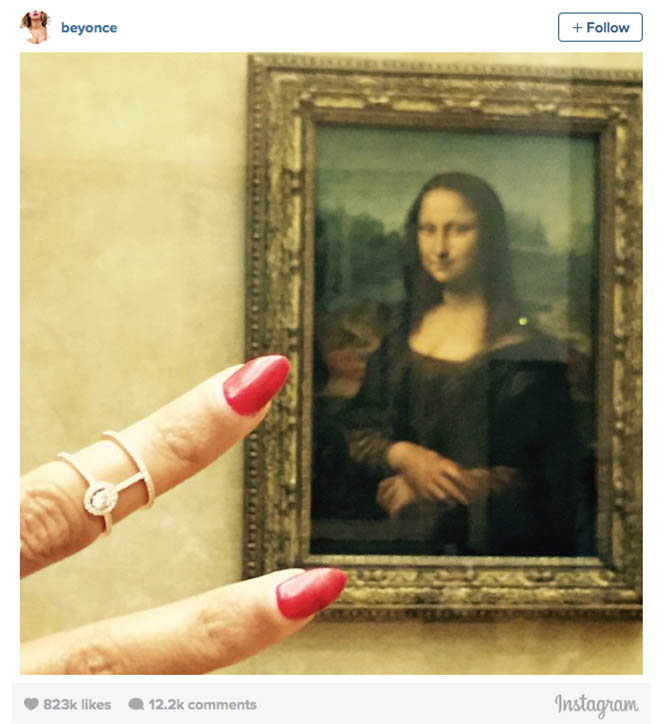 If you are wondering, like I am, how long it takes to put something like this together. There might just be a clue on Beyoncé’s Instagram. Going back to October 11, 2014 she posted a picture of the Mona Lisa and included her hand making a peace sign in the shot with a Messika Glam’Azone pave-set diamond ring on her finger. Of course, a lot happened between Beyoncé and Jay-Z and that moment. Yet the fact remains, they were working on a collaborative album before the 2016 release of Lemonade and 4:44 the following year. So it certainly is a possibility that the epic concept of “Apeshit” dates back to at least that bejeweled moment four years ago in front of Da Vinci’s masterpiece.

Watch the Apes**t video from The Carters above and see all the jewels.

Beyoncé’s $12 Million Diamonds at the Grammys