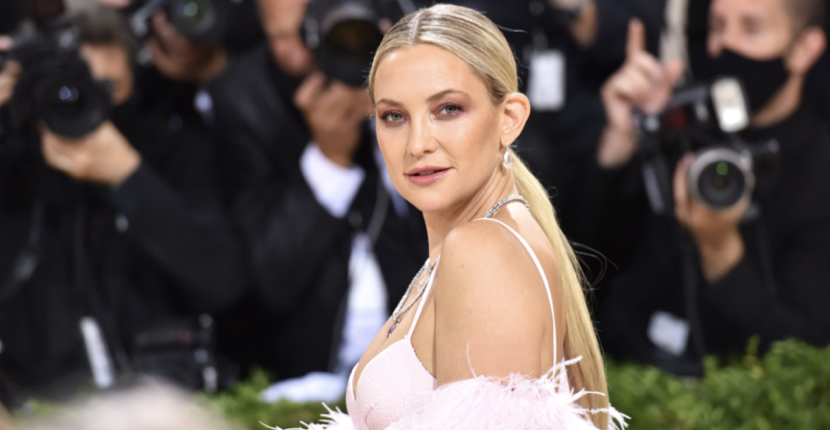 Kate Hudson at the Met Gala where she debuted her engagement ring. Photo Getty

September 15, 2021—When Kate Hudson posted an Instagram on Monday afternoon in an embrace with her longtime love, musician Danny Fujikawa, and the emoji caption “Let’s go! 👰‍♀️💒🤵🏻‍♂️,” I honestly thought they had just gotten married because of the emojis and the delicate band rings on the third finger of her left hand.

Well, I had it all wrong. The “Let’s go!” was referring to the fact that they just got engaged and are going to the church at some point.

After years together, plus one seriously adorable daughter named Rani who was born in 2018, the couple is making it official. And the band rings are not the ring. (A scan back of Kate’s Insta shows she routinely wears the bands on the third finger of her left hand.)

Kate debuted her stunning engagement ring at the Met Gala. The size and scale of the jewel has made headline news. As per usual with celebrity engagements, the couple is not talking about the details of the ring.

You know what that means? It is time for a jewelry investigation!

First, let’s review the details of the design. It looks like a light pink diamond or it could be a light brown with pink undertones. It’s large. It’s probably not 10-carats large but it’s reaching towards that number. It’s a cushion cut diamond. The gem is mounted horizontally in what’s referred to as an east-west setting. The metal is most likely rose gold.

It seems clear Kate planned her Met Gala look around the ring despite the fact that she posted about the engagement the day of the event.

Why would I think that? Well, the image of the couple on the coastline certainly could be somewhere in Long Island, New York but I don’t think it is. Obviously, Kate was in New York City on Monday for the Met. In addition to the fact that one of Hudson’s friends, Sara Foster, commented on the post “Whoa. It’s official 😱. Not gonna lie, been a hard secret to keep. I may have slipped and told a few people. ❤️”

So, the question is who made the stunning jewel?

Kate is a jewelry lover and wears pieces from lots of amazing designers. At the Met Gala, she had on a divine necklace from Lorraine Schwartz. She is very close to jewelry designer Jennifer Meyer. She has been wearing lots of Bulgari jewelry lately. And she has had a relationship and done collabs with the folks at Chrome Hearts for years.

Yet a closer look at the ring reminds me of Fred Leighton, another one of Kate’s favorite jewelry destinations. Her love of the legendary New York jeweler, which carries some of the greatest vintage jewelry anywhere and contemporary designs inspired by the old looks, goes way back. One standout moment was in 2011 when Kate wore a vintage star brooch from Leighton in her hair.

An Instagram post from October 5, 2019 is the smoking gun that makes me think Kate’s engagement ring is from Fred Leighton. The image has three fancy colored diamond rings. The one on the left has all the qualities of Kate’s gorgeous ring.

The post was one of those break the internet moments for this jewelry journalist. And I wasn’t alone. In the comments, Debra Messing exclaimed “The LEFT!!”

I was lucky enough to see the ring in person after the post and it is breathtaking and unforgettable.

If more facts on the jewel are confirmed or become available, this post will be updated.