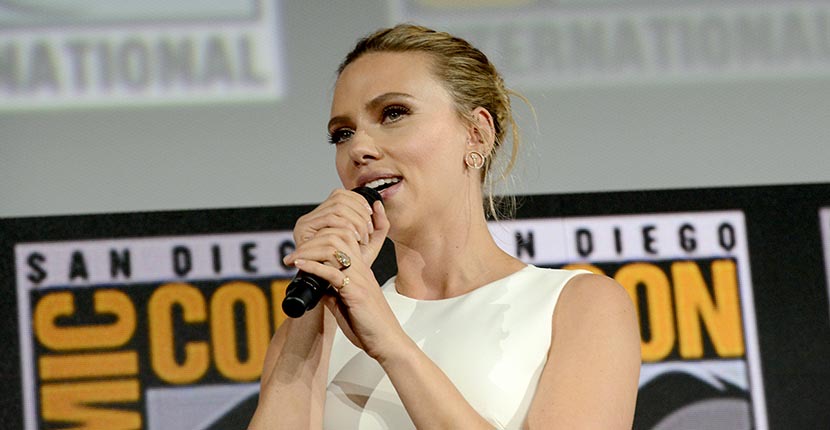 It could be one of the greatest in Hollywood History!

July 21, 2019—There are engagement rings and there are ENGAGEMENT RINGS! Scarlett Johansson stepped out for the first time publicly in her engagement ring from Colin Jost at the 2019 Comic-Con International in San Diego, California. She was speaking on the Marvel Studios Panel wearing a white and black ensemble by David Koma and introducing the amazing new cast of her forthcoming film Black Widow that includes Rachel Weisz, Florence Pugh and David Harbour.

While the entertainment press was fully focused on what promises to be a great new Marvel movie, I could not take my eyes off the ring. Honestly, I have been on high alert for the debut of the piece after, like everyone else in the media, I overlooked the debut of Zoe Kravitz’s engagement ring and Meghan Markle’s redesign. That was not going to happen again on my watch.

Well, Scarlett’s new jewel only appeared in a couple of images but was IMPOSSIBLE to overlook. The center stone practically reached up to the knuckle of the petite 5’3” super heroine. It is a pear-shape diamond and from the lighting in the images appears to be a light brown diamond of around 11-carats. The sensational setting is anything but typical. It is a swoosh underneath the rump of the pear. 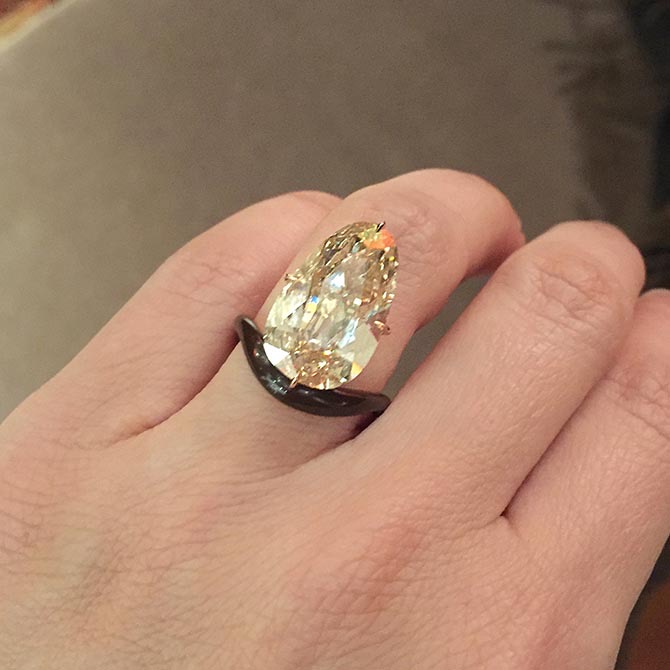 The James de Givenchy ring the author tried on at TEFAF, that has all the design hallmarks of Scarlett Johansson’s engagement ring from Colin Jost. Photo via Instagram @TheAdventurine

All the design hallmarks are exactly in line with a ring I tried on from Taffin designer James de Givenchy at the TEFAF fair in May. The spectacular New York based French jewelry designer is indeed the nephew of legendary couturier Hubert de Givenchy. He rarely loans jewels to actresses for the red carpet, but not because he is a snob. It is just not where his energies lie. Since James launched his collection 20 years ago, he has been carefully and masterfully honing his craft, creating incredible innovative jewels and gaining a cult following.

If James de Givenchy is indeed responsible for Scarlett’s stunning engagement ring, a closer look at the jewel which we will certainly get one day, could reveal it to be one of the most stylish and stunning any actress in Hollywood has ever worn.