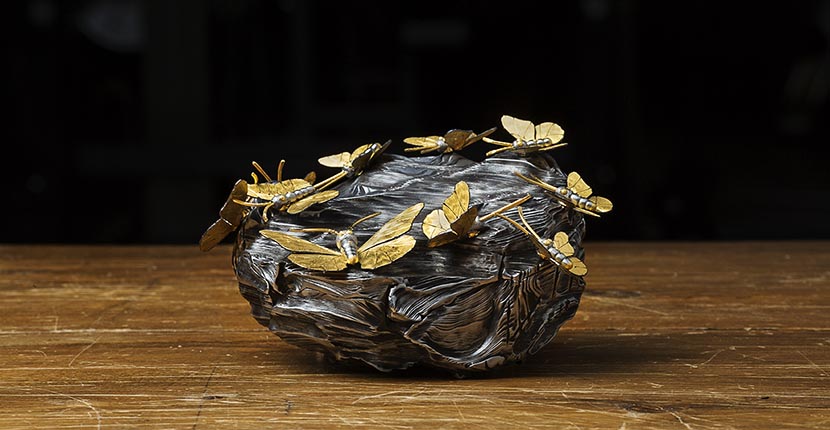 The 3 Must-See Exhibits at L’École in New York

Art Deco jewels, Daniel Brush’s creations and storied gems are in the shows

It has been three long years since L’École, the beloved School of the Jewelry Arts, had its first residency in New York City. Now the Paris-based institution is finally coming back to the Big Apple from October 25 to November 9. While there are only a few open spots remaining in the schedule of courses, workshops and conversations, the three exhibitions that are part of the program make it possible for everyone who is interested to participate in the event. 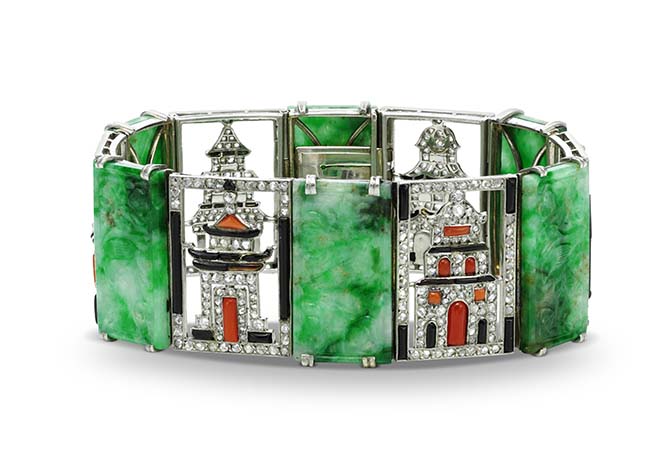 From the L’Ecole exhibit ‘Through the Eyes of a Connoisseur,’ an Art Deco bracelet made of platinum, diamonds, jadeite, coral and onyx by Leroy Berlioz

“We are passionately committed to sharing the multi-faceted aspects of all the effort and art that go into a jewel to the widest possible general audience,” explains the President of L’École, Marie Vallanet-Delhom. Free and open to the public the displays run a gamut of themes and occupy a few of the various rooms in the spectacular historic mansion at 2 East 63rd Street where L’École is located. 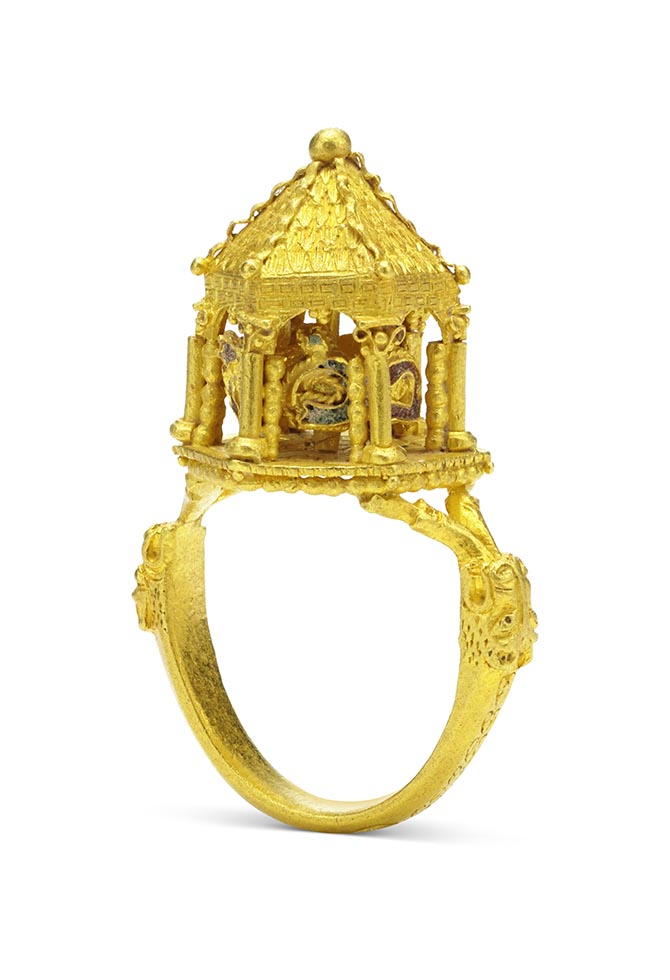 Fom the L’Ecole exhibit ‘Through the Eyes of a Connoisseur,’ a gold and enamel Jewish wedding ring made in the 14th century. Photo courtesy

Forty jewels from one private collection mainly dating from the 19th century to the 1960s are the subject of Through the Eyes of a Connoisseur. The exhibit includes dazzling Art Deco bracelets and a troupe of Van Cleef & Arpels ballerina brooches. A rare 14th century Jewish gold and enamel wedding ring is the most historic item in the presentation. “For this collector, a physician attuned to minute detail in his professional life, design and execution have become the primary attraction as the collection has grown in size and stature,” writes Stephen Harrison, Curator of Decorative Art and Design at the Cleveland Museum of Art, in the catalogue for the show. “Appropriate scale and proportion, the innovative use of stones, and the skills of the craftsman denote crucial hallmarks of quality for every acquisition.” 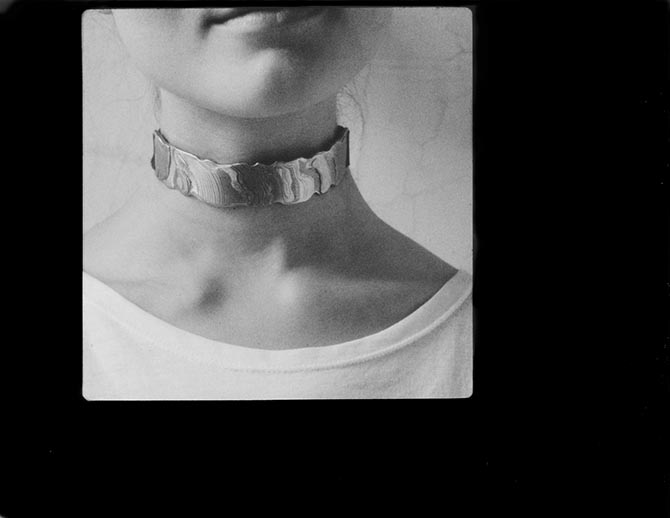 From the L’Ecole exhibit Daniel Brush: Cuffs and Necks, an image from An Artist’s poetry book 2013-2015. Photo courtesy

Another one of the exhibits features Daniel Brush’s creations. Universally considered one of the greatest master craftsmen of his generation, his work is rarely shown in public. When it is, it’s always an event. In 1998, Brush had a retrospective exhibit at the Smithsonian in Washington, D.C., Gold Without Boundries. Fourteen years later, his creations were shown at the Museum of Arts and Design in New York City in an exhibit, Daniel Brush: Blue Steel, Gold Light. The catalogue for the show included essays by intellects Dr. Oliver Sacks and Saskia Hamilton.

New jewelry from the American artist debuted in Paris at L’École last year in a show titled, Daniel Brush: Cuffs and Necks. It will be given an encore presentation in New York along with some of his vintage steel and gold objects made during the 1990s. “Daniel Brush, with his lifelong passionate quest for perfection in savoir-faire is simply the embodiment for L’École of the kind of dedication to creating beauty by human hand,” says Marie Vallanet-Delhom. “Only by means of an exhibition, can people see for themselves the creations of this rare artist: historian and former university professor, lover of fairytales, painter and poet, artisan, sculptor and jeweler.” 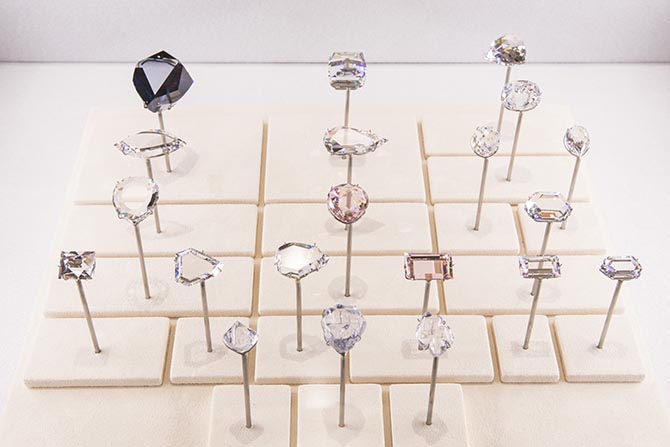 The L’Ecole exhibit ‘The Fabulous Destiny of Tavernier’s Diamonds: From the Great Mogul to the Sun King.’ Photo courtesy

The Fabulous Destiny of Tavernier’s Diamonds: From the Great Mogul to the Sun King is the smallest of the exhibits at L’École in New York, but it represents an epic achievement. The show is just one dazzling case of 20 state-of-the-art replicas of gems that were sold by the legendary merchant Jean-Baptiste Tavernier to Louis XIV. “Amongst the several thousand diamonds brought from India by Tavernier and offered to the Sun King in 1668, twenty stood out for their breathtaking beauty,” explains Marie Vallanet-Delhom. “They all disappeared in the 19th century, with the exception of the Blue Diamond, but are brought back to life here through the exhibition.”

L’Ecole’s experts worked for two years on the vast majority of the gems in the collection with François Farges, Professor of Mineralogy at the Muséum National d’Histoire Naturelle, Patrick Dubuc, Master Gem Cutter. To make sure the Blue Diamond, which is what the Hope Diamond was known as when it was owned by Louis XIV, was the correct color and shape, they team up with Jeffrey E. Post of the Smithsonian Institution in Washington, D.C. and New York based lapidary John Hatleberg. “After literally hundreds of colorization tests, we got it close enough to satisfy all these experts!” exclaims Marie.

L’École, which is supported by Van Cleef & Arpels, has produced beautiful paperback catalogues for each of the exhibits with essays by jewelry historians and other experts covering the various topics. The publications are complimentary and available to all visitors. The exhibitions are open seven days a week from 10am-6pm at L’École, 2 East 63rd Street in New York City throughout the course of the residency from October 25 to November 9.

*This post was created in partnership with our friends at L’Ecole.