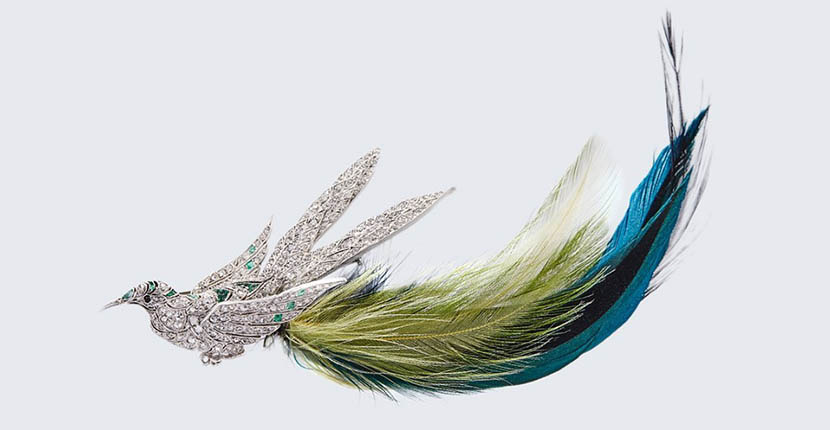 Since L’École, the beloved School of the Jewelry Arts, completed its wildly popular residency in New York last fall at a glamorous townhouse on the Upper East Side, the jewelry geniuses behind the institution staged not one, but two exhibits in Tokyo. The imaginative jewels, objects and furniture by Harumi Klossowska de Rola was the sole focus Vestigia Naturae. Incredible Art Nouveau jewels from Kazumi Arikawa’s collection formed the exhibit Through The Eyes Of A Connoisseur.

Now, L’École has opened a new exhibit at its home base in Paris, Birds in Paradise. The joyful presentation, that will be on display until July 13, 2019, features bejeweled birds dating from 1860 through the 1960s that have been sourced from two private collections and the Heritage Collection of Maison Van Cleef & Arpels. There are scores of bejeweled birds in the exhibit from French jewelers, including Baugrand, Cartier, Mauboussin, Mellerio, Rouvenat, Sterlé and Van Cleef & Arpels.

The pieces are artistically arranged in vitrines. Many are soaring mid-flight, some rest on branches. There is a bird soundtrack pumped through the room which brings the works almost to life. Paintings and historic taxidermy on special loan from the Muséum National d’Historie Naturelle, the Musée des Art Decoratifs and the Musée National de Ceramique de Sevres add to the naturalistic atmosphere. 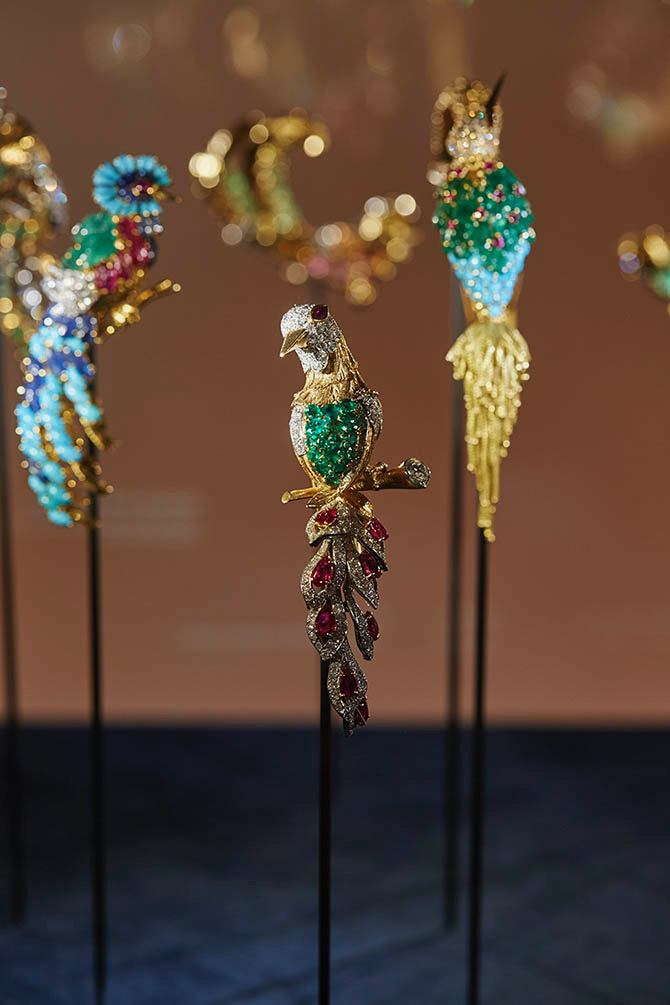 Some of the jewels in the Birds of Paradise exhibit at L’École in Paris. Photo courtesy

The story of bejeweled birds in the exhibit begins in the mid-nineteenth century when there was a popular interest in nature. Bird watching was a fashionable activity among society. Bird drawings were published in best-selling books. And some ornithologists such as Jules-Pierre Verreaux and John James Aubudon enjoyed a rock star level of fame.

At various points in history different species were the most fashionable. During the turn of twentieth century, peacocks and humming birds were among the flock in vogue. They represented beauty and lightness respectively. Swallows were also a routinely rendered in jewels. The birds symbolized fidelity and were a representation of home because swallows return to the same location every year to mate and nest. 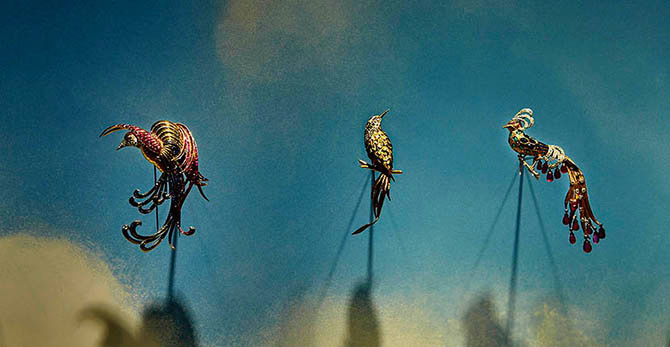 Detail of some of the jewels in the Birds in Paradise Exhibit at L’École. The Van Cleef & Arpels Bird of Paradise made in 1942 is on the left. Photo courtesy

During World War II, French jewelers created bird brooches as a symbol of freedom and patriotism during the Occupation. An extraordinary Bird of Paradise brooch, made by Van Cleef & Arpels in 1943, was surely set with sapphires, diamonds, and rubies as a representation of the colors of the French flag, known as the Tricolour.

The Cartier creative team, Jeanne Toussaint and Peter Lemarchand, made little caged bird brooches during the Occupation symbolizing the mood of the nation. After the Liberation, they recreated the design with the bird standing on the edge of the open door of the cage with outstretched wings and an open beak, singing songs of joy.

Boivin created strong eagle brooches that represented the Resistance during the Occupation. After the Liberation, the House made Roosters symbolizing French independence. 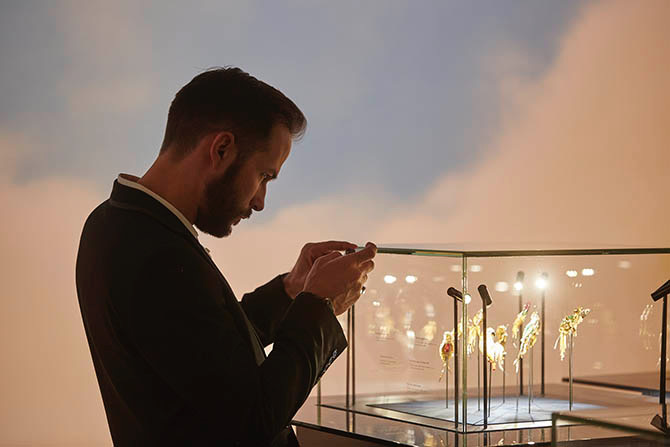 A visitor to the Birds in Paradise exhibit capturing a selection of Sterlé brooches. Photo courtesy

When the war ended, high spirits were reflected in vibrant gem encrusted birds. Birds of Paradise and Love Birds flew at many of the French houses reflecting the good times. There was a sense of sweetness and light to a lot of the work.

Pierre Sterlé made birds during the 1940s and 50s that stand out as genre unto themselves. The talented designer, who was close friends with the artist Georges Braque, had a unique creativity to his work that reflects mid-century art. He magnificently transformed gold chain, textured gold and specially cut stones into his own variety of birds rendered in any number of attitudes and postures. A flamingo, composed of one specially cut piece of coral, snake chain and diamonds, strikes a charming pose in profile. Many of Sterlé’s birds with labradorite bodies and outstretched wings composed of textured gold and snake chain are so dynamic they look as though they are soaring through the sky.

The exhibition Birds in Paradise will be on display at L’École, School of Jewelry Arts, 31, rue Danielle Casanova, Paris, France until July 13, 2019. Admission is free and the hours are from 12pm to 7pm from Monday to Saturday.

Indian Jewels Ignite The Dreams of An Author

Micromosaic Jewels Go On Display At The VMFA