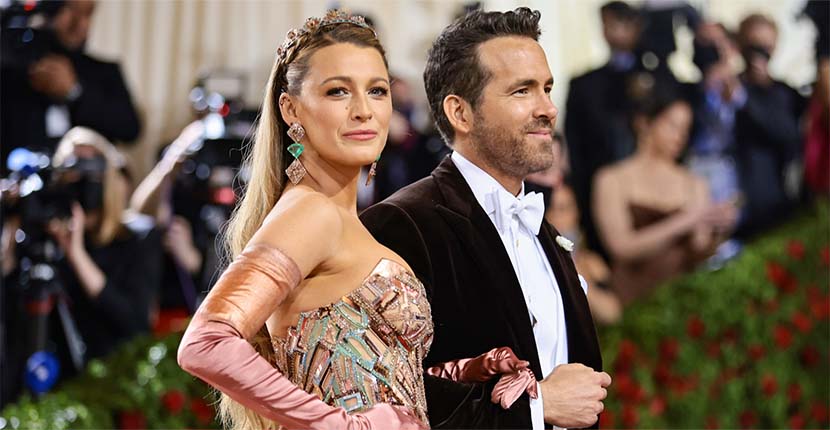 Met Gala co-chairs, Ryan Reynolds and Blake Lively who is wearing a tiara and earrings by Lorraine Schwartz. Photo Getty

May 3, 2022—Last September when the first Met Gala was held for the two-part exhibition In America: A Lexicon of Fashion, a few guests arrived in looks that had a classic American feel, but the vast majority jumped way off script. And really who can blame them? This is a big country with lots of different styles. Nevertheless, the riffing left most critics and lots of fans confused and annoyed. Last night for the opening of the second installment of the In America exhibit there was a Gilded Glamour theme and things were a lot more cohesive.

There was a select group of guests who took Gilded Glamour to mean the Gilded Age which is experiencing such a revival in popular culture with shows like Netflix’s Bridgerton and HBO’s The Gilded Age. My favorites among this group wore tiaras, which Americans did do at formal affairs during the period. It’s so rare to see tiaras on the red carpet. If it does happen there is usually just one. Last night there were a handful.

Another group of guests seem to be following the idea of the American bombshell with gorgeous gowns and pendant earrings. Women who, as the author of the beloved book, The Bombshell Manual of Style, put it “know how to make an entrance.” The concept was capped off by Kim Kardashian who arrived last on the red carpet in Cartier diamond pendant earrings and the Jean Louis dress Marilyn Monroe wore in 1962 when she sang “Happy Birthday Mr. President” to John Kennedy.

Find out more about the jewelry below.

Blake Lively, a co-chair of the Met Gala, paid tribute to New York City with her copper and teal Atelier Versace Gown and Lorraine Schwartz jewels. The actress explained in a video for Vogue how the colors were a tribute to the natural copper color and patina tone of the Statue of Liberty.

Lorraine’s earrings composed of nude-colored diamonds and light emeralds coordinated with the gown to perfection. The design of the copper tiara with nude diamonds and Paraíba tourmalines have seven spikes similar to Lady Liberty’s famous crown symbolizing the seven continents. Blake asked Lorraine to make the tiara with 25 stones to represent Liberty’s 25 windows.

Vogue’s editor-in-chief Anna Wintour explained during a red-carpet interview that her vintage diamond tiara, clearly from the Gilded Age era, was American.

Unfortunately, she didn’t name the designer or where the piece came from. She paired the jewel with diamond statement necklaces.

The piece in her hair isn’t technically a tiara, but it is worn like one. The antique Chaumet necklace has old mine diamonds set in oval plaques.

Her diamond and platinum tiara was made in 1911. And the striking choker with yellow diamond centers was made by the French jeweler in 1928.

Hamish Bowles, Global Editor at Large of Vogue and Editor in Chief of The World of Interiors, wore the Verdura Feather Headdress, commissioned by the American heiress and philanthropist Betsey Whitney who wore it for an event at Buckingham Palace with Queen Elizabeth in 1957.

The yellow gold and platinum tiara designed by Fulco di Verdura as a feather headdress is composed of 36 leaves, set with 1,223 diamonds weighing 28.32 carats. Native American Indian headdresses inspired the silhouette of the jewel.

Alicia Keys paired her Ralph Lauren gown and cape with the New York City skyline along the bottom edge in crystals with Tiffany & Co. Archives iridium-platinum earrings set with diamonds and emeralds.

Gabrielle Union channeled Diahann Carroll in her Versace gown. She paired the sparkling number with Tiffany diamond pendant earrings and a bracelet.

Kim Kardashian closed the red carpet at about 9pm last night wearing the Jean Louis dress Marilyn Monroe wore in 1962 to sing “Happy Birthday, Mr. President” to John Kennedy. She dyed her hair blonde in tribute to the bombshell actress. And she tossed on a pair of Cartier Essential diamond earrings.