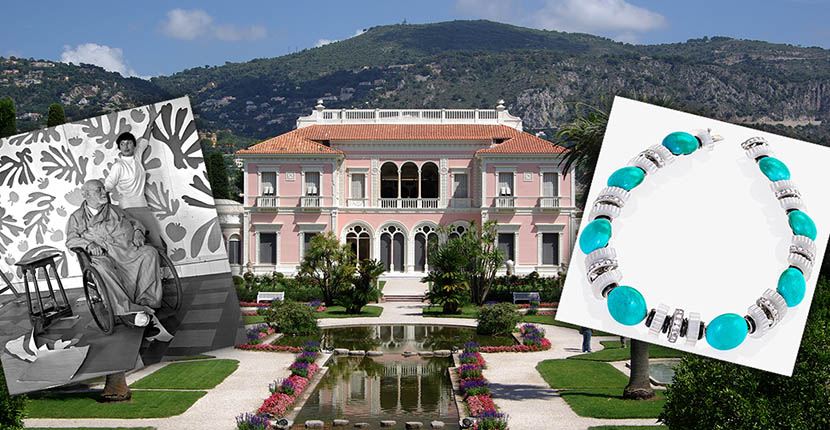 Matisse and an assistant in his studio in Nice, Villa Ephrussi de Rothschild and a Mauboussin necklace from Macklowe Gallery Photo Getty, Wikipedia Commons and Macklowe Gallery

M.J. Rose imagines the life story of the owner of a Mauboussin necklace

This is what I imagine.

In 1945, she took the train from Paris to Nice for an interview with Henri Matisse. He was adding another assistant to his studio to help with his collages and she was desperate to get the job, certain the master of color was the teacher she needed.

She spoke more in hues and shades than words. Her dreams shimmered in royal blues and azure greens. Her nightmares in blood red and tarnished gold.

Walking into Matisse’s atelier, she expected to be intimidated, but his smile was so kind, and his eyes twinkled so joyously she forgot to be nervous.

“You look like someone I could paint,” was the first thing he said. “What a wonderful odalisque you would make.”

She had her mother’s exotic Moroccan looks, olive skin, straight, almost black hair cut to her chin, and large feline eyes. Knowing Matisse’s love of bright colors and patterns, she’d dressed for the interview, with a scarf in ten shades of blue, bright red-blue lipstick, black slacks, and a chartreuse blouse.

He sighed in mock sadness, and even before she answered pointed at her portfolio, “But you are an artist, and want to study, not pose, yes? Show me what you have brought.”

She arranged her paintings against the wall so Matisse could examine them.

“So, Mademoiselle, why should I take you on?” he’d asked after a few minutes.

“When you started out, the critics said you trashed every possible norm of pictorial order and painterly finesse. But you stayed true to your vision and proved them all wrong. And proving people wrong,” she said, “is my raison d ‘être.”

The great painter laughed and hired her. 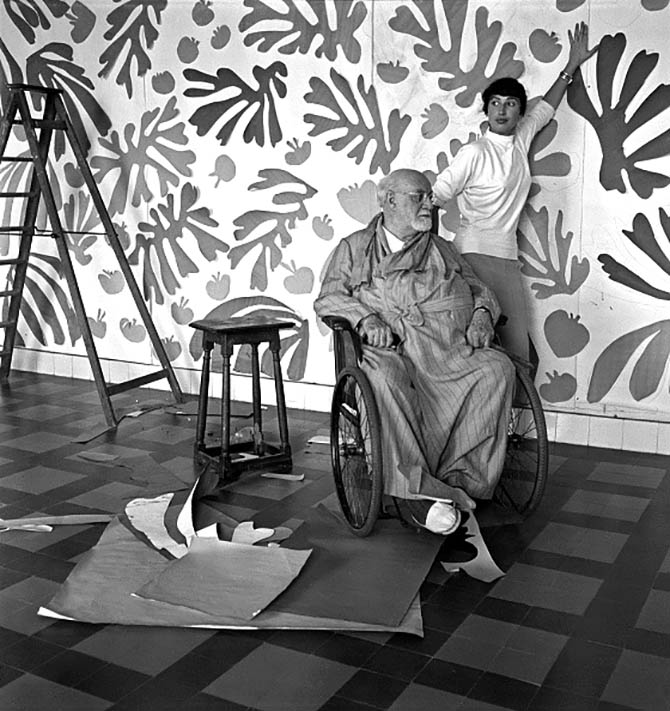 Henri Matisse at his studio in Nice 1952, with his muse, model and manager Lydia Delectorskaya in front of one of his collages. Photo Getty

When she wasn’t assisting him cutting out colored paper for his collages, Matisse sent her to paint en plein air a half-hour away at the gardens at Villa Ephrussi de Rothschild. He said it was integral for her development as a colorist.

And as a woman, as it turned out.

In the early 1900s, Béatrice de Rothschild had built the rose-colored villa in Cap Ferrat, on the Mediterranean. To combat Le Mistral and the salty air and accommodate the flowers and trees she wanted, the Baroness hired the finest landscapers to design her nine gardens.  They blew up rock, leveled the land, and brought in tons of soil to defy nature.

Everything about the glorious grounds enchanted Matisse’s assistant. For over a year, she visited at least twice a week, painting her heart out. She was drawn to the French garden most of all. Its terrace lead to a long pool, ornamented with fountains, statues, and basins of water lilies. On the far end, up a small hill, sat a stone Temple of Love copied from the one at the Petit Trianon. 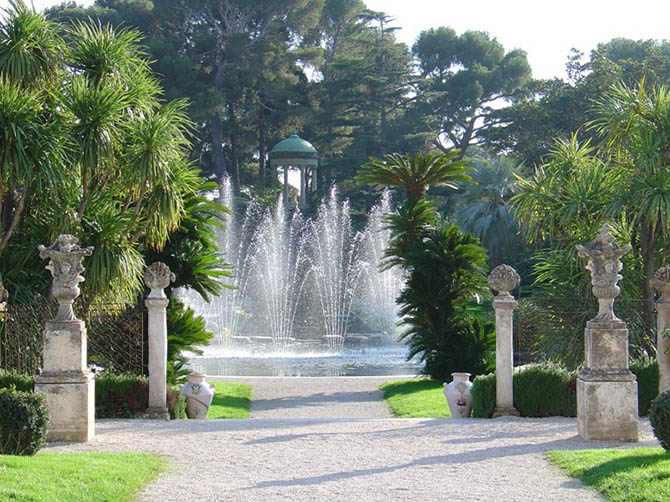 She was painting inside the folly one summer afternoon when she sensed someone standing behind her.

Turning, she saw a man watching her. He was dressed like a gardener but spoke like an art collector

“Your palette is quite bold, Mademoiselle. Your blues, purples, and reds have something of the Fauves about them but with an original je ne sais quois. Is this painting for sale?”

“Are you a gardener or a collector,” she asked.

“Does it matter?” he laughed.

She shook her head. “Not if you can afford it.”

“You are bold like your work,” he said and introduced himself.

She recognized his name immediately. A famous scion of industry, he was often in the news and his wife, well known for her fabulous dinner parties, was just as often in the society columns.

“I am both an amateur landscape architect,” he said, “and an art lover.  And I believe I’ve fallen in love with your style.”

In time, he also fell in love with her. 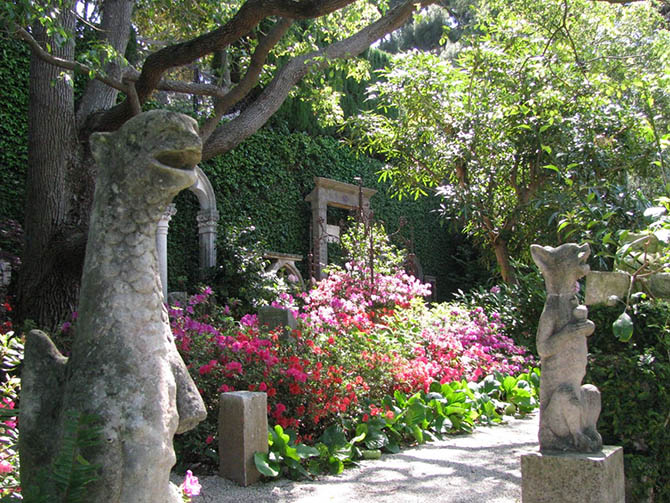 While some women yearn for marriage, children, security, and tradition, being his mistress suited her far better. It allowed her to devote most of her time to her painting, which except for him, was her only passion.

After they had been together for a year, he bought her a lovely apartment in Monte Carlo overlooking the turquoise sea. He hired an architect to turn its second bedroom into her art studio. When the industrialist arrived for a tryst, he always brought a beautiful piece of jewelry that celebrated her audacious color palette.

He dressed her in citrines and topaz for a dinner at the gilt and cream dining room at the Hotel de Paris. Draped her in aquamarines for an outing on his yacht. Pinned emeralds, spinels and amethysts on her smock for visits to famous gardens where she would sketch, and he would wander around with a notebook and camera studying the work of great landscapers.

She often said they were happy because with so much time spent apart, they missed each other more than they annoyed each other.

He said it was because they wouldn’t have annoyed each other even if they were together all the time.

The years passed. He remained married. She remained his mistress.

On their tenth anniversary, he rented out the Villa Rothschild for a candlelit dinner served in the little Temple to Love where he’d first seen her painting. He popped the cork on a bottle of Tattinger Rosé, poured it into Lalique glasses etched with angel wings, and toasted their perfect arrangement.

Then he gave her a gray suede case.

Opening it, she let out a small gasp.

“You’ve given me the sea,” she said as she reached out to touch one of the stones.

He took it from her, placed it around her neck, and clasped it closed. Asserting his right to do such an intimate thing.

“When I saw this in Monsieur Perinet’s gallery, it reminded me that it was your love of color that made me first notice you. Consider this a small token of appreciation for sharing all that color with me. Now, just be careful not to get any paint on it.”

They laughed and she kissed him. For a long time. 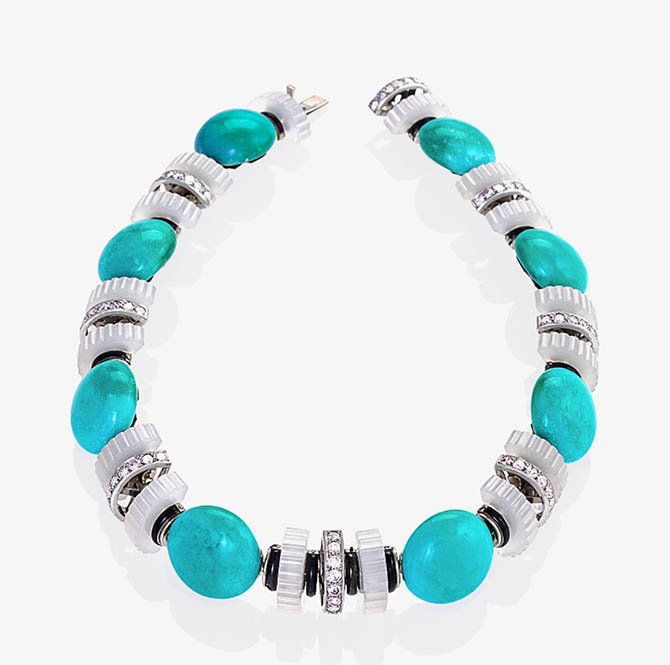 Currently at Macklowe Gallery an Art Deco platinum necklace with turquoise, carved milky chalcedony, diamonds and enamel by Mauboussin. There are 72 round-cut diamonds that have the approximate total weight of 5.96 carats. Photo courtesy

This is what I know.

The lovers’ names are a secret. We don’t know if she was an artist or worked for Matisse. But according to Ben Macklowe of Macklowe Gallery, we know there was indeed a mysterious art collector, a French industrialist, married for decades with many children, who considered himself an amateur landscaper. We know he bought this necklace made by Mauboussin in 1929, from the Parisian dealer Michel Perinet. And we know he gave it to his long-time mistress who resided in their apartment in Monte Carlo.

And we know she is there still, living above the beautiful turquoise sea. Elderly and frail now, when she must, she sells one of the pieces in her extraordinary jewelry collection gifted to her by the love of her life.

And while we can’t know it, we believe that even if this necklace or that bracelet is no longer within her reach, her beautiful memories are.