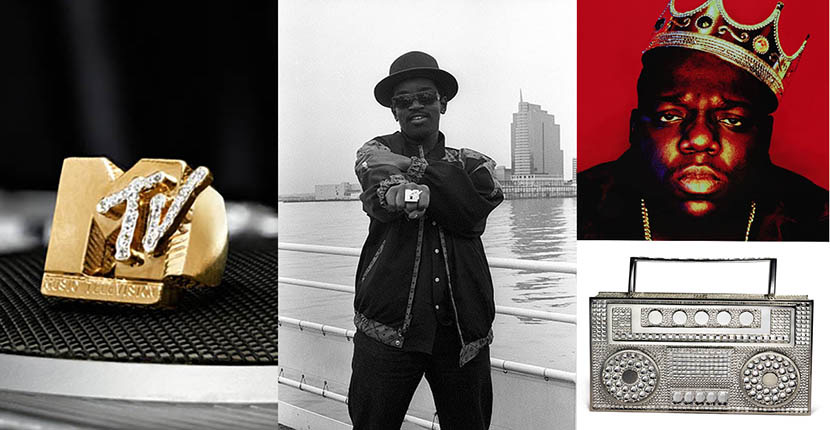 There is a massive 102.39-carat diamond being sold at Sotheby’s that has garnered international headline news and it’s a beauty. But I have to admit I am obsessed with another event at the auction house the Hip Hop sale on September 15.

The auction, that was organized and curated by Sotheby’s VP, Senior Specialist Cassandra Hatton in collaboration with the former president of Tommy Boy Records Monica Lynch, reflects the impact Hip Hop had on art and culture from the late 1970s through “Golden Age” of the mid-1980s and mid-1990s on up to the present.

A portion of Sotheby’s proceeds will benefit the Queens Public Library Foundation, to support their Hip Hop Programs, coordinated by “Uncle” Ralph McDaniels, as well as Building Beats, a non-profit community organization that teaches tech, entrepreneurial and leadership skills to underserved youth through DJ and music programs.

Following are details on several jewels and accessories in the sale. 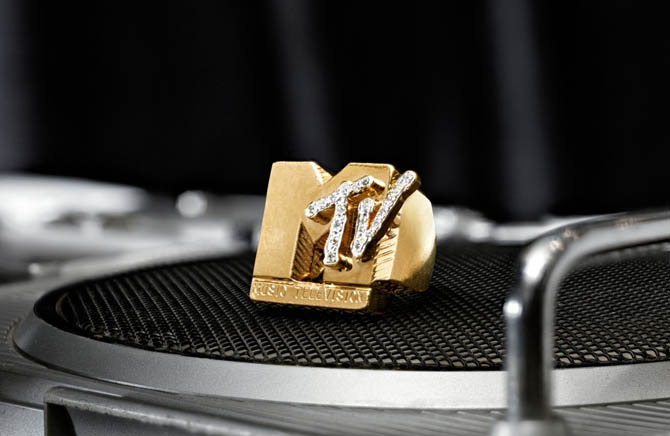 At the time that Yo! MTV Raps! burst onto the scene in 1988, the style in jewelry was thick gold rope necklaces, crosses, heavy medallions, Mercedes logos and the like, but the shows’s host, Fab 5 Freddy, wanted a piece that was totally unique, so he decided to design his own. To create the piece, Freddy worked with Tito the Jeweler, aka “Manny”, the first Hip Hop jeweler, who had built up a loyal following, creating custom over-the-top pieces for drug dealers and pimps in the 1970s. Eventually, all the big Hip Hop stars became his clients, including Rakim, Salt-N-Pepa, Biggie, LL Cool J, and of course, Fab 5 Freddy. 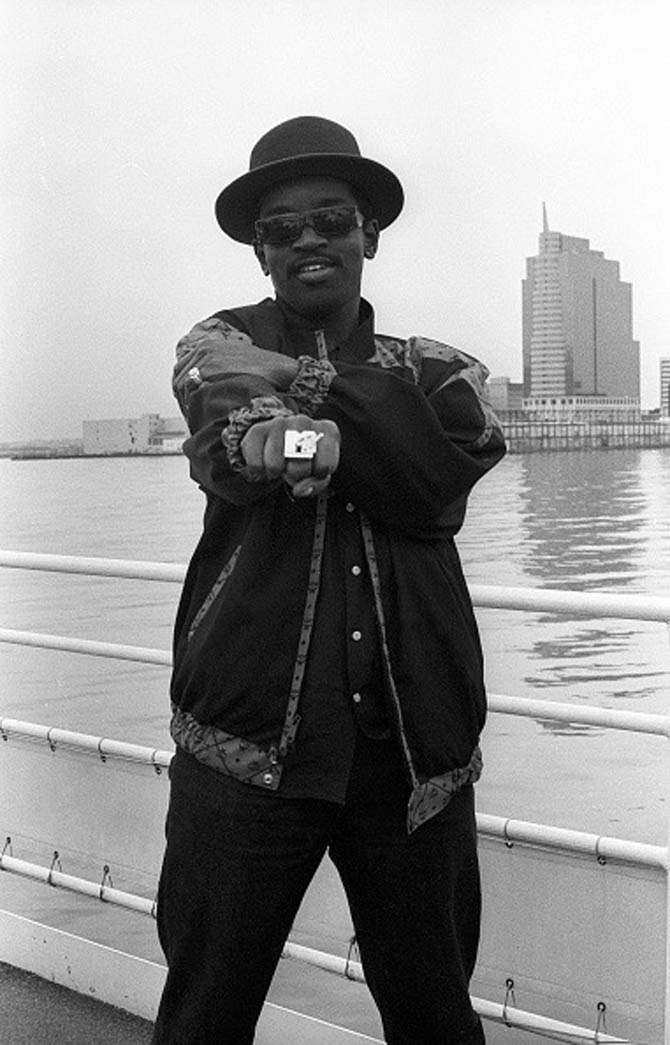 Fab 5 Freddy, is a visual artist, filmmaker and Hip Hop pioneer. In the late 1970s, he was a member of the Brooklyn-based graffiti group, the Fabulous 5, who specialized in painting the sides of subway cars. His name was first introduced to the pop culture scene when Blondie name-checked him in her 1980s hit “Rapture”, saying “FAB 5 FREDDY told me everybody’s fly.” He went on to play a pivotal role in bridging the gap between the early rap and graffiti scene of New York’s uptown, and the punk music and art scene of downtown. He would go on to co-produce the legendary film Wild Style with Charlie Ahearn, and hosted the wildly popular MTV show Yo! MTV Raps. 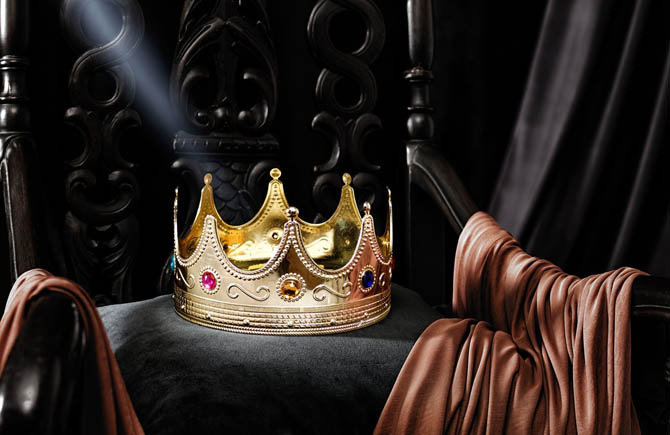 The plastic crown decorated with plastic gems is signed by Biggie Smalls and the photographer Barron Claiborne, “Crown from Biggie KONY Shot. 3-6-97.”

The jewel is being offered with a 36 x 40 chromogenic print, contact sheet and 10th anniversary print from the photographer.

THE FAMOUS CROWN WORN BY THE NOTORIOUS B.I.G. FOR THE ICONIC “K.O.N.Y” [KING OF NEW YORK] PORTRAIT SESSION, SHOT BY PHOTOGRAPHER BARRON CLAIBORNE ON MARCH 6, 1997, IN HIS NEW YORK STUDIO.

The story of how the portrait came about is famous; Claiborne was hired by Rap Pages to shoot Biggie for the cover, and his concept was to portray him as the King of New York on his throne.

Barron brought two crowns of two different sizes to the shoot; one was far too small to be used, and in order to get the now-legendary crown to fit, the interior foam cushioning had to be removed. Sean “Diddy” Combs [aka Puffy], the owner of Bad Boy Entertainment (Biggie’s label) had accompanied Biggie on the shoot, and was reportedly unhappy with the concept, as he worried it made Biggie look like “the Burger King”. Thankfully, Biggie was game to give it a try; the result is one of most stunning and iconic portraits, and sadly, the last, to be taken of the superstar, who would be killed just three days later in Los Angeles. 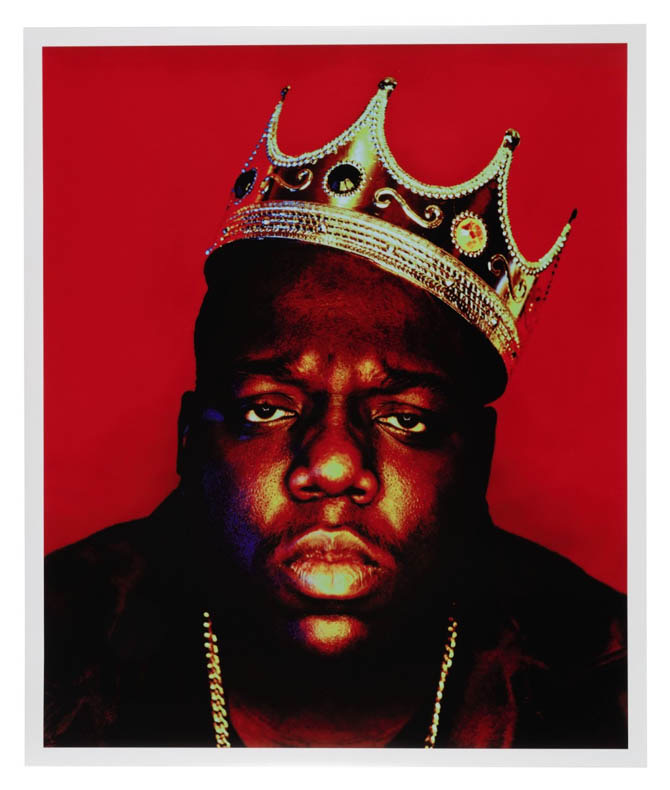 A self-taught photographer and cinematographer, Barron Claiborne received his first camera at the age 9 from his mother, Betty Lou, and has dedicated much of his craft to the creation of images that represent the dreams, stories, and oral traditions of his Southern American and African Ancestry. After moving to New York City in 1989 from his hometown of Boston, Claiborne began assisting photographers such as Richard Avedon, Irving Penn, and Saint Claire Born; since then has been highly prolific in the field of photography and its many arenas including commercial, documentary, and fashion. Claiborne’s photographs have been internationally recognized, and his work has appeared in numerous publications including The New York Times, The New Yorker, Newsweek, Rolling Stone, Esquire, and Interview, among others. Claiborne’s photographs are in permanent collections around the world including the Polaroid Museum Cambridge, the Brooklyn Museum, the Houston Museum of Fine Arts, and MoCADA. 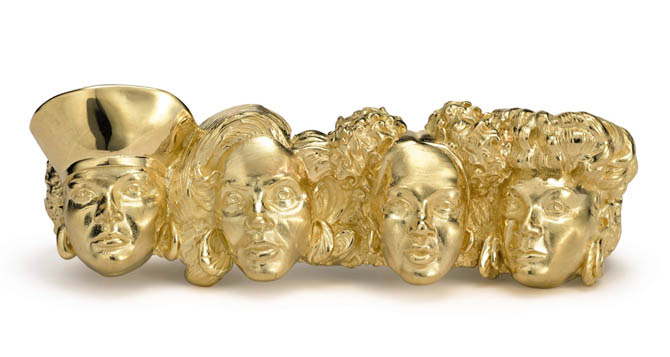 Custom hand-made four finger ring in solid 14K gold, signed “JN” on one side, and “Sotheby’s” on the other.

A one-of-a kind ring, custom designed for this sale, depicting some of the greatest female MCs of all time: Queen Latifah, MC Lyte, Lady of Rage, and Roxanne Shanté.

Johnny Nelson was born in England and raised in Brooklyn. His biggest influences include Vivienne Westwood, Alexander McQueen, and the iconic neighborhood jewelers that elevated Hip Hop culture in the 80s and 90s.

He founded Johnny Nelson Jewelry in 2017. Each piece is proudly crafted in NYC using various fine metals and stones. Johnny Nelson Jewelry was brought to fruition long before it’s initial inception. Nelson’s transition into jewelry design began in 2014, when he was on tour and decided it was time to look as good as he felt while performing. His solution? Jewelry. The first piece was an attention-grabbing 3-finger ring, made with stone and wire, that he asked his mom to bring to life. It was then Nelson found he had not just a genuine passion for jewelry, but the raw talent and creative vision to match.

In his designs, Nelson draws inspiration from his diverse artistic and cultural experiences that merge punk, Hip Hop, and spirituality. The line heavily focuses on statement pieces that spark conversation amongst consumers. His work has been featured frequently in press, and is popular with a host of celebrities; the custom sculpture portrait buttons and Black power cuff-links he designed for Kerby Jean Raymond (his 8 favorite Hip Hop artists) and Lena Waithe’s (8 LGBTQ icons) 2019 Met Gala suits were a tremendous hit.

Leanna Commins. “After a Met Gala Boost, Johnny Nelson’s Hip-Hop-Inspired Jewelry Is About to Blow Up“ 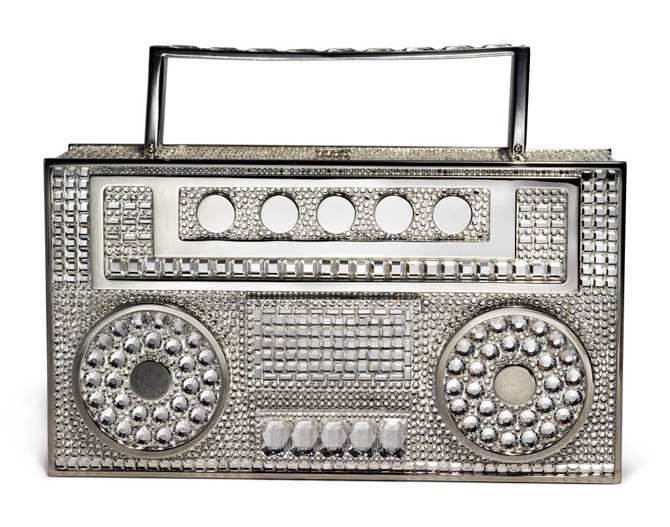 Sotheby’s commission Judith Leiber to create this one-of-a-kind handbag for the sale. The accessory is composed of crystal with silver toned metal hardware. It has a glitter resin handle over a crystal-inset push down closure, and removable long shoulder chain.

The design is playful reference to the portable device music lovers once carried around and played at full volume in the streets of New York and other cities. They were also used by break dancers during street performances. 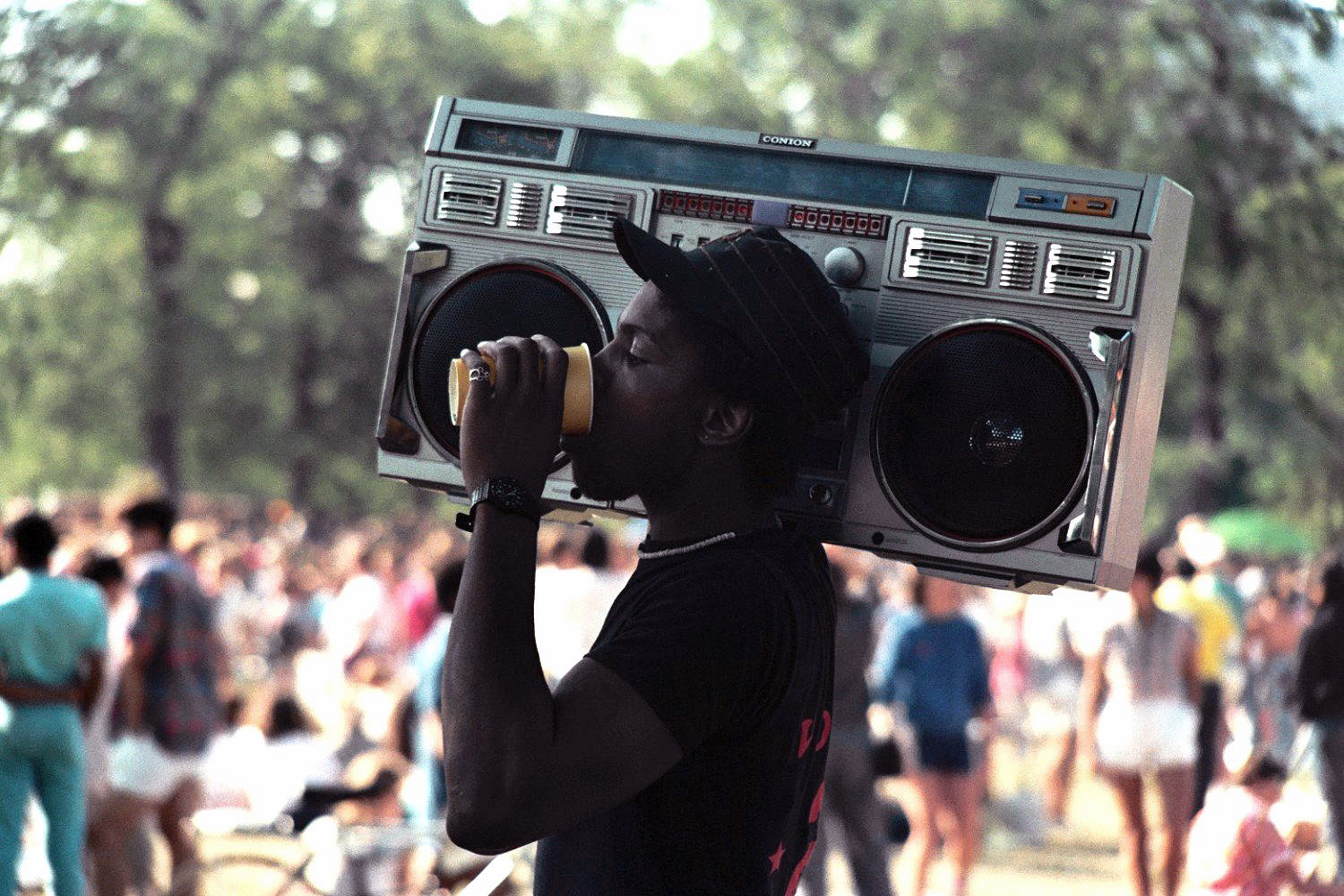 A man holding a boombox in 1985. Photo Wikipedia Commons

Beyoncé’s Jewelry In ‘Black Is King’