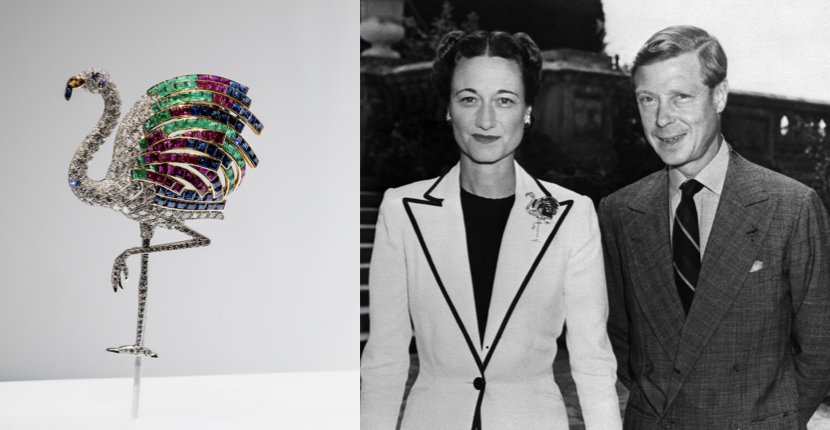 The Duchess of Windsor’s Cartier flamingo brooch in the Beautiful Creatures exhibition. The Duke of Windsor with the Duchess wearing the jewel during a stop in Bermuda in August 1940 on the way to the Bahamas. Photo Denis Finnin/©AMNH and Getty

The Duchess of Windsor’s Flamingo Brooch

The little-known story behind the Cartier jewel is fascinating

August 16, 2021—There were so many iconic jewels in the Duchess of Windsor’s collection it is hard to say one is the most iconic of them all. But the Cartier flamingo brooch made in 1940 is certainly in the top five. For many it is number one. It simply represents her. For example, it appeared on the cover of the 1988 biography The Duchess of Windsor: The Secret Life that sold over 1.3 million copies. No picture of the Duchess is on the cover. Just the jewel.

For one more month, until September 19 to be exact, the flamingo is on display at the American Museum of Natural History in New York City as part of the exhibition I curated Beautiful Creatures: Jewelry Inspired By The Animal Kingdom.

It is without a doubt the most well-known jewel in the exhibition. It’s immediately recognizable even to people who know very little about the history of jewelry. And yet the back story behind the design is not so well known. It is not even reviewed in The Secret Life, despite the fact that it is on the cover.

So, I thought I would share the details, my guesses about certain things as well as clarifications on inaccurate information that has appeared recently around the old interweb and elsewhere.

When was the flamingo made and what are the details of the design?

The Duke of Windsor commissioned the flamingo brooch from Cartier-Paris in March, 1940.

World War II was already underway and the supply of precious gems and metals to France was interrupted. Clients had to provide their own gems and metals in order to have a jewel made.

Cartier’s designer Peter Lemarchand made clever and easy use of the line bracelets in the tail feathers. There is an arc in the setting of the tail feathers that gives the piece a sculptural and slightly naturalistic quality. Another manufacturing detail is the hinged joint in the standing leg. It provides the piece with a bit of movement and flexibility like all good jewelry.

The jewel measures about 4-inches high but it does look larger on the Duchess’s petite frame.

Why did the Duke of Windsor commission a flamingo?

It has been reported that the flamingo was the Duchess of Windsor’s favorite bird and the brooch was a birthday present.

While the jewel certainly could have been given to the Duchess for her birthday on June 19, I am not so sure the flamingo was chosen because it was her favorite bird.

I feel like it might have been a pick-me-up type of present for the Duchess before the couple had to relocate to the Bahamas which was a British colony at the time. The flamingo is the national animal of the Bahamas.

The couple was sent to the Bahamas during the war where the Duke of Windsor became Governor and Commander and Chief. The English government wanted to remove them from proximity to members of the Nazi party who they were socializing with in Paris. In 1937, before the war and atrocities began, the Windsor’s infamously took a trip to Germany and met with Hitler.

When and how did the Duchess of Windsor wear the flamingo brooch?

The Duchess adored the flamingo brooch and wore it almost everywhere as the couple traveled from Europe via ocean liner to the Bahamas. There is even video of her wearing it in Burmuda one of the many stops they made en route. She also continued to wear it throughout her life.

As extravagant as the design looks from today’s perspective, it was a daytime jewel for the Duchess. She pinned it to her chic suit jackets and day dresses.

What happened to the jewel after the Duchess of Windsor died?

On April 2, 1987, the flamingo brooch was sold at Sotheby’s in Geneva along with the rest of her collection to benefit The Pasteur Institute, a biomedical research facility located in Paris.

It has recently been reported that Elizabeth Taylor bought the jewel. She did not. Elizabeth Taylor only purchased the Prince of Wales diamond brooch from the Duchess of Windsor’s collection in 1987.

The flamingo was purchased from the 1987 auction, along with 19 other items by one private collector. The assemblage of jewels was sold by that collector (or their estate) on November 30, 2010 at Sotheby’s in London.

The jewel was acquired in 2010 by the Cartier Collection and has appeared in countless museum exhibitions, such as Beautiful Creatures, since it became part of the jeweler’s archive.