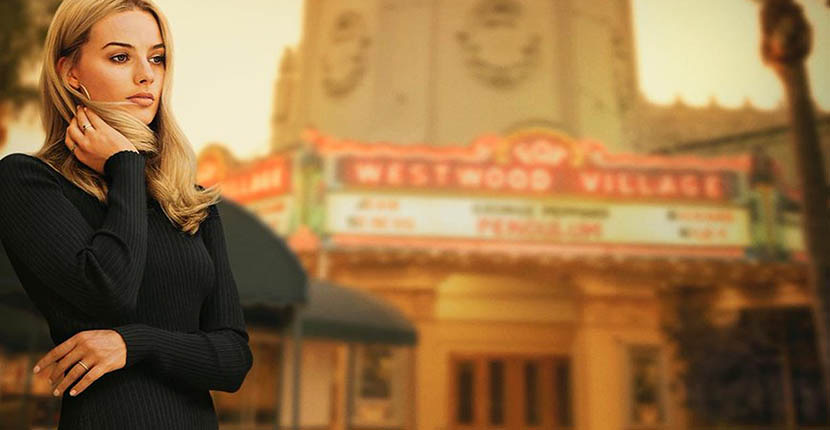 Margot Robbie wearing hoop earrings and rings in 'Once Upon A Time In...Hollywood' Photo Sony Pictures

The Jewelry in ‘Once Upon A Time…In Hollywood’

Quentin Tarantino’s new film Once Upon A Time…in Hollywood is an amazing addition to the genre of movies about what it’s like to be an actor in Hollywood making movies. Historically, and in OUATIH starring Leonardo DiCaprio, Brad Pitt and Margot Robbie, there is a built in tension between glamour in front the camera and the behind the scenes grit and struggle of what it’s like to stay in the spotlight.

Once Upon A Time…In Hollywood is set in the late 1960s and shows just how popular jewelry was during the period for men and women alike. The pieces costume designer Arianne Phillips chose for the actors are not all vintage, but they recreate and capture the mood to perfection. 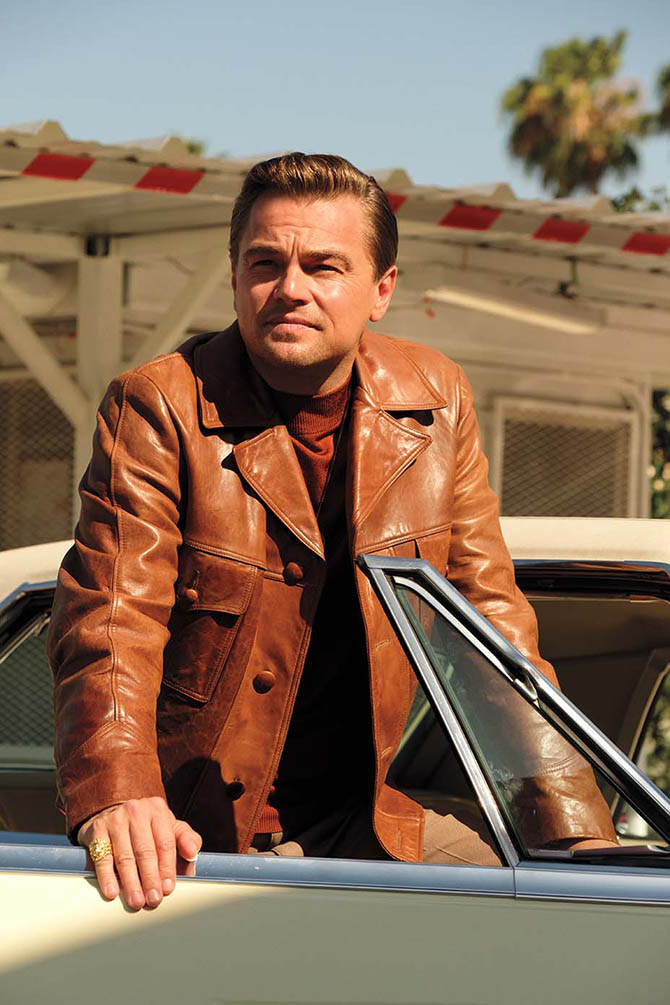 Leonardo DiCaprio’s star status is established with the bold pinky ring featuring a lion head motif that gets a closeup in an early scene while he is picking up a drink at the historic Hollywood hangout, The Musso and Frank Grill. The animal might just be a fun wink and nod to Leo’s name. Phillips shared with Fashionista that the jewel was a collaboration between the property master Chris Call, DiCaprio and Tarantino. Considering the size of the jewel, I don’t think it is actually gold but it still shines brightly. 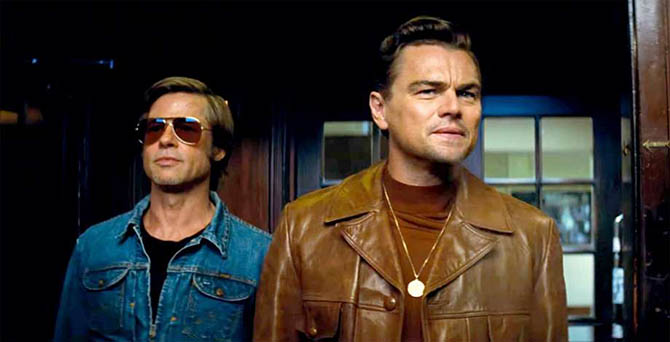 DiCaprio also wore a bronze pendant necklace modeled after a gold style worn by sixties star Steve McQueen. Philips went to local Los Angeles jeweler Stuart England to create the design. In the film the pendant looks like it has a pyramid zodiac type of symbol. There was also an R on the jewel for DiCaprio’s character Rick Dalton. 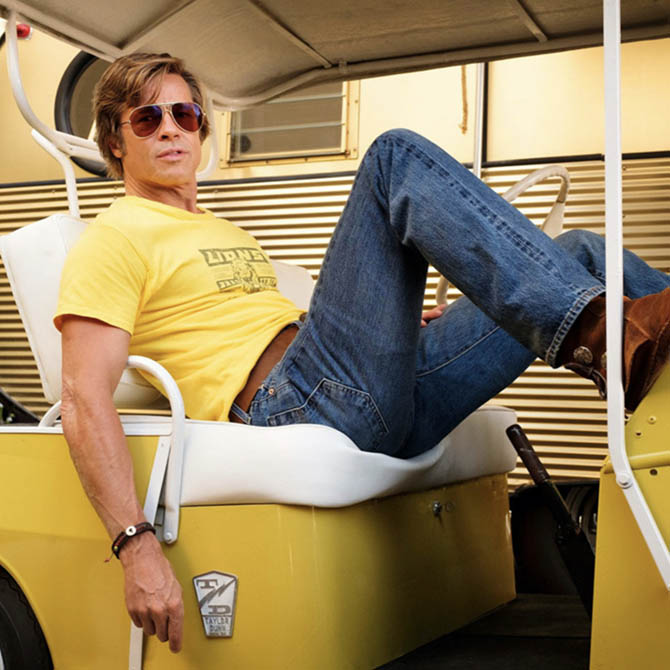 Brad Pitt is a jewelry lover in real life and while I haven’t found any references revealing how he was involved in the pieces he wore in the film, I bet he was interested in the decision-making process. His twisted leather bracelet is the perfect accessory to match his t-shirts, moccasins, jeans and aviators. 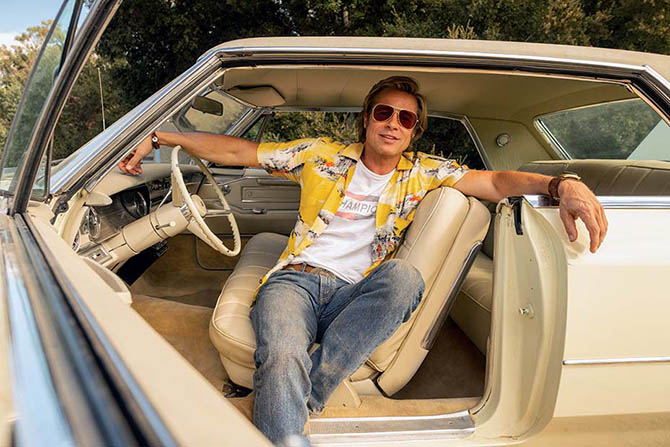 The wristwatch Pitt wears throughout the film has been identified by Watch-ID.com as a 1970s gold Citizen 8110A Automatic Bullhead watch. The case of the timepiece is set on a wide leather band. The too cool coupling of the watch on the wide band was in-line with the detail-oriented costumes of the entire film. 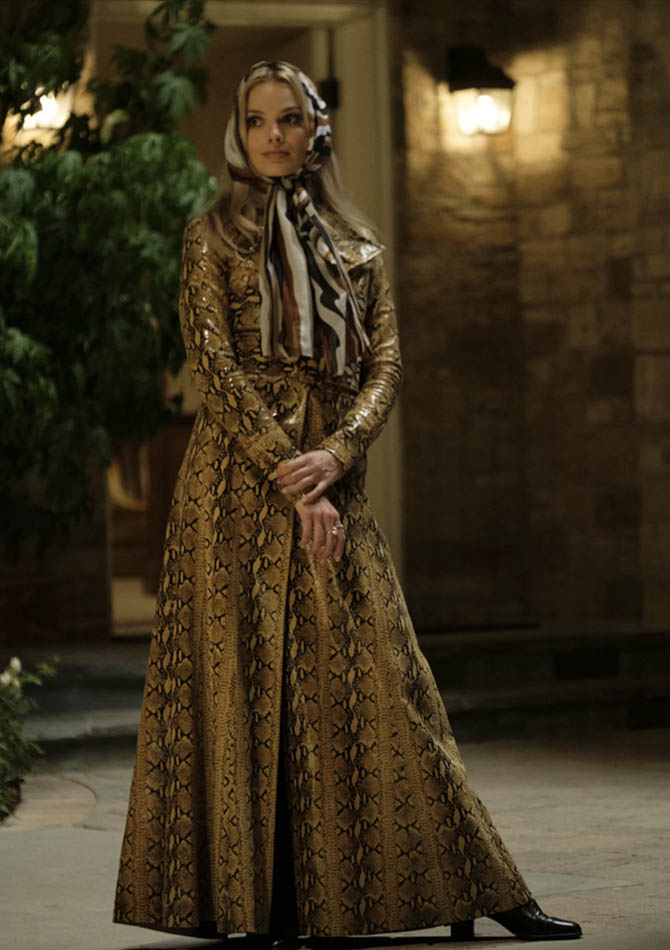 During the 1960s actress Sharon Tate was a style icon. Her look included fabulous mini and maxi dresses, cool sunglasses and great accessories. Phillips beautifully recreated the star’s fashions for Margot Robbie. When it came to the jewelry, Tate did not wear big precious pieces in real life. Her jewels were cool layers of costume. Some items worn by Margot in the movie were loaned to her by Sharon Tate’s sister Debra. 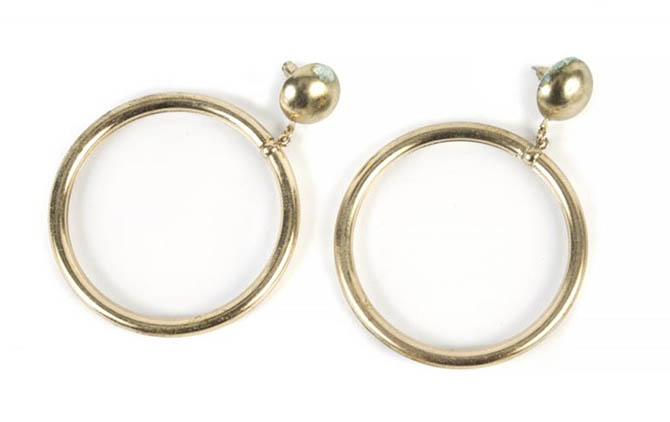 While it hasn’t been revealed exactly what pieces those were among the hoops and layers of rings, a look at the items sold in a selection from the star’s estate at Julien’s in Los Angeles on November 16, 2018 show the jewels in the movie were in the size and scale of Sharon Tate’s collection. 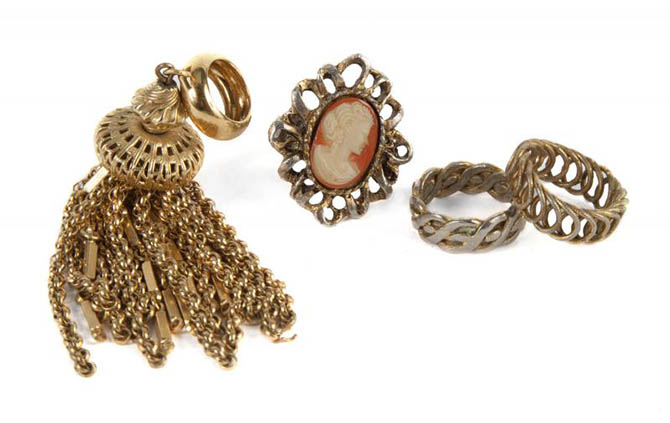 An assortment of Sharon Tate’s rings sold with items from her estate. Photo Julien’s auctions

The Jewelry In ‘Rocketman’ Is Worth Millions

About That Diamond Necklace in ‘Moulin Rouge’