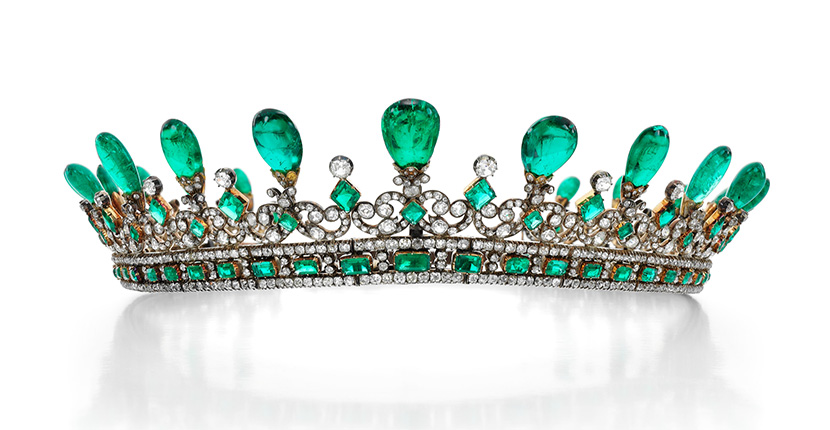 Among the almost 50 tiaras on view will be the Spencer tiara Princess Diana wore at her wedding and on many other occasions. Queen Victoria’s emerald tiara and a cameo tiara made for Joséphine Bonaparte are two of the other most well-known designs in the presentation.

In an apropos bit of curation, there will be several tiaras in the exhibit worn by guests at Queen Elizabeth’s 1953 coronation.

They include the Anglesey Tiara thought to have been made around 1890; the Derby Tiara initially created for the Duchess of Devonshire in 1893 and the Westminster Halo Tiara commissioned from Lacloche Frères in 1930 by the Duke of Westminster for his bride Loelia Ponsonby.

“The sourcing of these jewels has been a labor of love, resulting in an exhibition that showcases the best iterations within the tiara style register, through some of its most famous incarnations—including the much-loved and photographed Spencer Tiara,” explained Kristian Spofforth, Head of Jewelry at Sotheby’s London. “This is also a wonderful moment for us to shine a special light on the dazzling craftsmanship delivered by generations of mainly British-based jewelers across several centuries of tiara making.”

Power & Image opens at Sotheby’s in London on May 28. The free unticketed event closes Sunday June 15. Find out more about highlight pieces from the exhibition below.

The silver and gold Spencer tiara became world-famous when Princess Diana wore it during her royal wedding to Prince Charles on July 29, 1981. She continued to wear the design happily ever after during her life as an HRH.

Like so many historic tiaras, the Spencer jewel was altered and updated as fashions changed over the years. The design is believed to have been initially created in 1767.

During the 1930s, essential pieces of the Spencer tiara were transformed into the garland styles as it exists today.

The central portion is shaped into a heart. It is flanked by running scrolls interspersed with star and trumpet shaped flowers.

Prince Albert designed Queen Victoria’s emerald and diamond tiara (in the photo at top) in the Gothic Revival style. The crown jeweler Joseph Kitching manufactured the tiara in 1845.

It has become one of the most well-known jewels in Victoria’s vast collection because she wore the piece in the Franz Xavier Winterhalter portrait The Royal Family in 1846.

A cameo, gold and enamel diadem made in Paris around 1805 by Jacques-Ambroise Oliveras for Napoleon’s Empress Joséphine shows off the Neoclassical style the couple revived.

It features 16th and 18th century agate and jasper cameos. One depicts the head of Medusa. Another has a profile of Zeus.

An important diamond waveform tiara made by Cartier in 1904.

An amethyst, sapphire, onyx and diamond bandeau made by Cartier during the 1920s.

A diamond tiara made during the mid-19th century.

A diamond tiara made by Carrington & Co. during the early 20th century.

A turquoise and diamond tiara made by Van Cleef & Arpels during the 1960s.