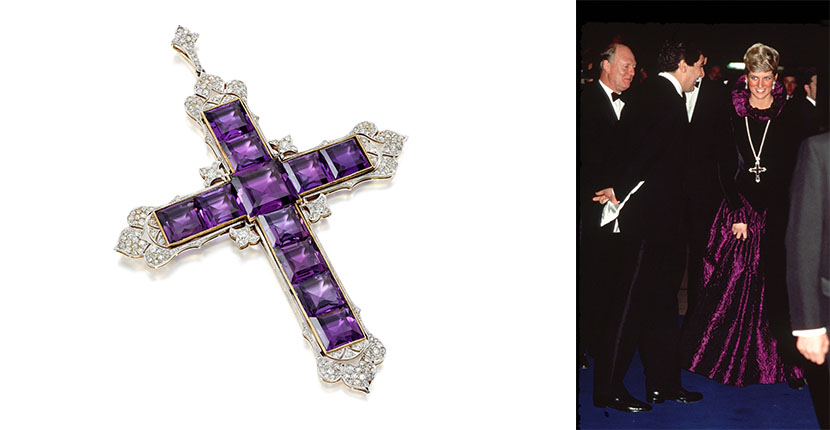 December 23, 2022—Here is a fact that might make purist who don’t approve of celebrities borrowing jewelry for special occasions clutch their pearls: Princess Diana wore loaners a few times. And one of those jewels, a giant Garrard antique amethyst cross is being sold in January during Sotheby’s London Royal & Noble auction.

Before we review the jewel, lets recap Diana’s brief history of borrowing treasures to make an outfit.

In 1997 while the Princess was in New York to attend a party for her charity sale of dresses at Christie’s, she paid a call on Verdura where she became enchanted with a gold Double Crescent bracelet. The double C or crescent motif on the jewel was “derived from the cipher of Diana, Roman goddess of the hunt.” Princess Diana borrowed the bracelet for the Christie’s reception.

The loaner occurred the year after Diana divorced Charles and lost access to the array of treasures from Queen Elizabeth’s collection she had worn routinely. In addition to rebuilding a new life for herself, she was also assembling a wardrobe of her own jewels.

One of the most well-known jewels she acquired was the now famous Asprey aquamarine cocktail ring that is currently in Duchess Meghan’s collection.

In 1997 while Garrard was in the midst of creating a diamond and pearl suite of jewels for Diana, she borrowed the necklace from the set for a performance of Swan Lake at London’s Royal Albert Hall.

Two months later, Diana died before officially acquiring the jewels. The necklace she wore became known as the Swan Lake necklace and was ultimately sold at auction. It has had a few different owners over the years.

When I first saw the cross being sold at Sotheby’s London, I assumed it was a piece she had borrowed after the divorce because all the jewels from her personal collection seem to have gone to her sons William and Harry. They would be too sentimentally precious to sell. But the fact is Diana borrowed this cross in 1987, nine years before the divorce.

The jewel is known as the Attallah cross because it belonged to the late Naim Attallah CBE, the former group chief executive of Asprey & Garrard.

According to Ramsay Attallah who is selling the jewel, “Princess Diana and my father were friends and I remember that she often came to see him at the historic Garrard store on Regent Street, where his office was, and she would ask to borrow the pendant on several occasions—she really loved the piece.”

The Fleurée cross pendant made during the 1920s by Garrard is believed to be a one-of-a-kind commissioned jewel. It is set with square-cut amethysts and diamond details and measures approximately 5.3 x 3.7 inches. The estimate on the jewel is approximately $96,500 to $144,000.

The image of Diana seen here is the only known photo of her in the pendant. She wore it at the 1987 Birthright gala on a long pearl necklace with a Catherine Walker velvet and taffeta purple dress.

Details of the gown were inspired by the Tudor era, a favorite period of inspiration for Catherine Walker. Diana clearly had the historic mode in mind as well when she styled the jewel.