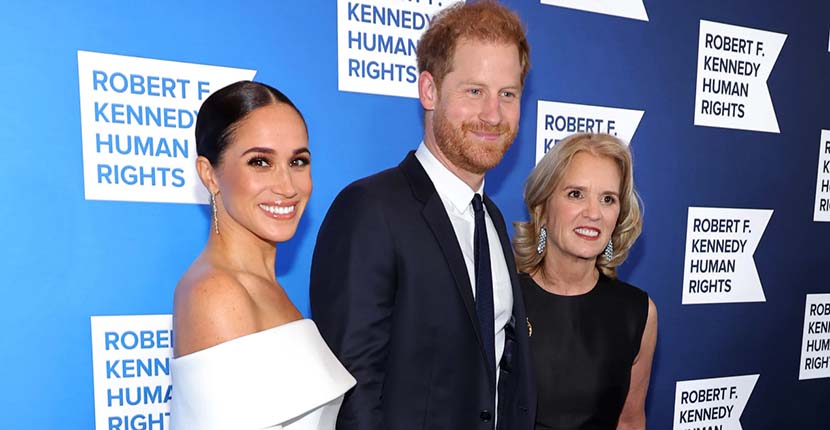 December 8, 2022—Things are so different now. Every move feels less about love and a lot more calculated. I am not just talking about Harry and Meghan, but all of the British royal family. The one who (remarkably) seems above the fray is Camilla, but that could change once we get a look at the Netflix docu-series Harry & Meghan.

Just in advance of the release of the small screen drama, Prince Harry and Duchess Meghan descended on New York City Tuesday night for the Ripple of Hope Award, presented by the Robert F. Kennedy Human Rights nonprofit organization. The honor recognized the good works the couple does through Archwell, a non-profit which has partnered with and supported an array of organizations.

It’s an interesting idea about the color and probably right. Royal women enjoy messaging with their jewels and attire. Last week the Princess of Wales (aka Kate Middleton) wore a green off-the-shoulder gown representing the environment for the Earthshot Prize in Boston.

I was really hoping the long pendant earrings Meghan paired with the Vuitton were diamonds. I thought perhaps they might be Monique Péan, but they were not. It would have been quite a coup if they were custom Tiffany who is doing so many custom things for celebrities, but they didn’t make them.

The sleuths at What Meghan Wore identified the earrings as costume designs from Carolina Herrera. They cost $190.

The big jewelry statement from Meghan was her aquamarine ring from Princess Diana’s collection. You remember she put it on for the first time on her wedding day for the evening parties and people basically went ballistic.

I did two stories on it. Two! One about the moment she revealed it. And one about how Diana commissioned it from Asprey shortly after the divorce from Charles.

I was excited then. Now, I can’t help but feeling like we are all being played. Meghan, just like Kate last week, knows when she wears Diana’s jewels it tugs on our heartstrings. Considering the royal family mess at the moment, I get why these women would want some positive press through the jewels, but something feels off about it.

Without going really negative on this situation, I think we can all agree the memories jewelry holds is powerful. When Meghan or Kate turn-up in Diana’s jewels we are all moved.