How The Stars Aligned for the Must-Have Design

Sometimes it takes outsiders to shake things up. That’s just what happened in the jewelry sphere when Yves Spinelli and Dwyer Kilcollin, launched the Galaxy ring. It took off in record time with a constellation of stars including Gwyneth Paltrow, Oprah Winfrey, Emily Blunt and Heidi Klum.

Model and actress Emily Ratajkowski who has posted any number of selfies wearing the ring to her millions of Instagram followers told The Adventurine exclusively she loves how the “unique and unmistakable design mixes silver, golds, and diamonds so that you can wear whatever other jewelry you want.” She also likes the versatility. “I often wear the ring the same way, on two fingers, but it’s fun playing around with it. Sometimes midday I’ll switch it up and stack it on one finger or spread them all out over three.”

The story behind the Spinelli Kilcollin sensation started by happenstance just a few years ago. One day Yves [pronounced in the Italian manner, Eve-ess] Spinelli was talking with his father, Antoine, a hairdresser by profession and a jack-of-all trades in life. The conversation led to a concept for a ring Yves had envisioned for himself. “I told my dad I had this idea for a design with three-thin bands that were connected with three little rings and it would be worn across three fingers,” explains Yves. “My dad said ‘that’s a cool idea.”’ The creative father and son team had dabbled in jewelry together when Yves took a basic silversmithing class growing up in Honolulu and decided to do it again. 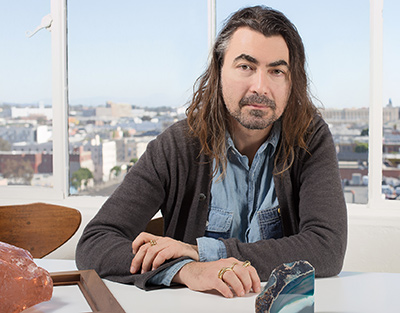 Yves Spinelli at the Spinelli Kilcollin studio in Los Angeles.

When the silver ring arrived to Yves in Los Angeles from his father in Hawaii there was something wrong. “He made it with five rings not three!” recalls Yves. After getting over his initial irritation at the mistake, Yves realized he could personalize the piece by how he chose to wear it. “It had a quality I appreciated in clothing by designers like Comme des Garcons where elements of say a jacket or a dress could be tied around the body in different ways.”

Yves began wearing the jewel all the time including to his management job in sales at the avant garde Los Angeles boutique Maxfield and kind of thought that was the end of it. But clients started noticing it and wanting to buy it. “Honestly, I didn’t even know how to price it, size it or if my father could fill orders,” confesses the designer. Flash forward another year or so Yves met and fell in love with artist Dwyer Kilcollin. “She added a sense of color and conceptual ideas to the design,” says Yves. “We both believed in it, realized it had growth potential, quit our jobs and formed the company Spinelli Kilcollin in 2010.”

The newbie jewelry team made a few charming errors in the beginning. Like the time they took Yves’ original ring—the prototype—to a jeweler who disassembled it to make molds and reassembled the bands in the wrong order. “It didn’t fit!” remembers Yves. “I had to look at pictures of myself wearing it to realize what had gone wrong. It’s a deceptively simple design.” 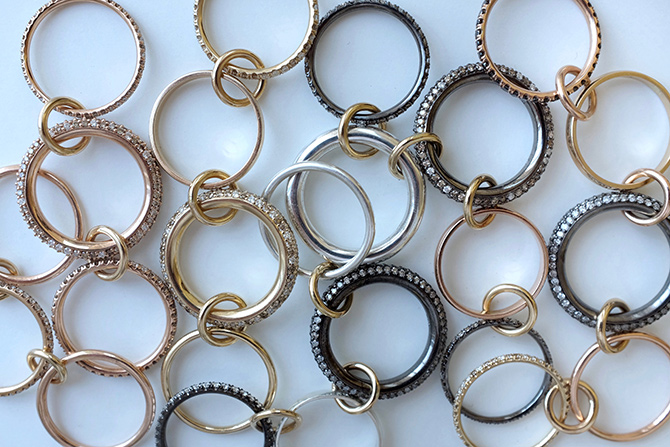 An assortment of Galaxy Rings by Spinelli Kilcollin

The mistake made the two begin the process of refining the fit of the sizes of each band and adjoining connectors. Ultimately they chose the more elegant looking results of pulling wires rather than using molds. They also played with the proportions and created rings with three and four bands. When they decided to add diamonds, the design duo created a painterly way to pavé. “We don’t come from a fine jewelry background,” says Yves. “We like to mix things up.” They blended different shades of brown and white diamonds together in gem papers and had their stone setter place the gems randomly on rings. The unique approach resulted in a highly desirable fine jewelry detail—each ring has a one-of-kind quality in the diamond setting.

It took a couple of years to get all the components in place and expand the collection for the retail environment. As it grew they named each new rendition after some element of the Galaxy. “The original ring was named Galaxy because we thought it looked like the planets aligned when it was all spread out,” explains Yves. “The variations receive names like a constellation such as Pieces.”

The next thing that happened was the press started coming in waves. In 2014 a story about the ring “taking over” the Vogue offices hit the magazine’s website. “We couldn’t believe it,” remembers Yves. From that moment Yves took his sales skills and single handedly covered the globe, personally meeting with press and stores to show the ring. While Dwyer, who prefers to remain somewhat behind the scenes, works as the creative director to the company and continues her career as an artist. Today the Spinelli-Kilcollin ring can be found in almost 50 retail locations worldwide, but the couple is not resting on their laurels. They have created bracelets and necklaces as well as a dazzling custom engagement ring collection inspired by the band Yves presented to Dwyer when he proposed. Adding a fairy tale component to the amazing success story of the Galaxy ring.