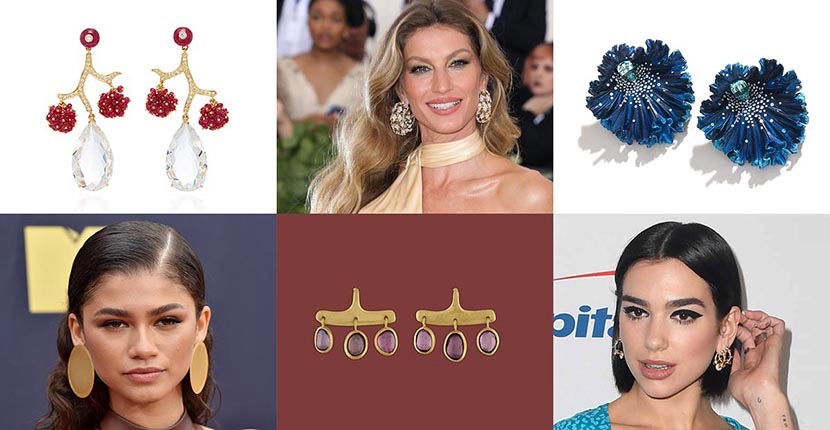 For The Adventurine’s annual list of who will be huge in the forthcoming year in jewelry, we always try to find a diverse bunch that reflect several perspectives. Not all of the designers on this annual hot list are new names. Some have been making jewelry for over a decade, others have been in business for just a few years. A couple work at the very highest end of the business. There is one costume collection with pieces that only cost a few hundred dollars. What unites the group is that each has a strong unique vision that reflects what dynamic women want now. Get to know six jewelry designers we feel will be huge in 2019 and, as the saying goes, watch this space for all kinds of exciting stories on designers throughout the year. 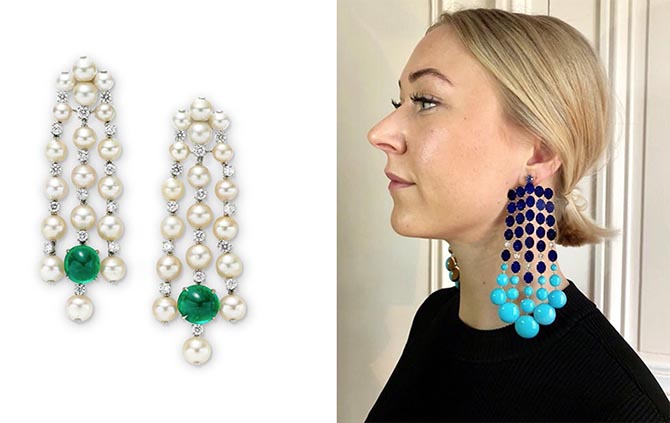 Earrings by SABBA composed of natural pearls, diamonds and emeralds at left. SABBA earrings of lapis and turquoise at right. Photo FD Gallery and @fd_gallery via Instagram

SABBA—The Bold and The Beautiful

Alessandro Sabbatini, the designer behind the jaw dropping SABBA collection, is an anomaly. He doesn’t have an Instagram account. He prefers to focus on the quality of his work. Sounds like the description of jewelry veteran, someone who has been around for awhile, right? Wrong. Alessandro is a millennial. He launched his line in 2014 at the tender age of 26 after a stint designing High Jewelry for Cartier. His collection can be found exclusively in the United States at FD Gallery. The most sensational pieces are giant earrings set with stunning gemstones. When I asked Alessandro what inspires him, he replied simply “women.” He thinks of stylish collectors from the past and the clients he works with so closely today. I can’t name names, but if I told you who was looking at his jewelry while I was reviewing it you would know them. The designer’s most high-profile moment of 2018, occurred when supermodel Gisele Bundchen chose to wear a pair of his earrings to the MET Gala in May. She can be seen in the photo at top. 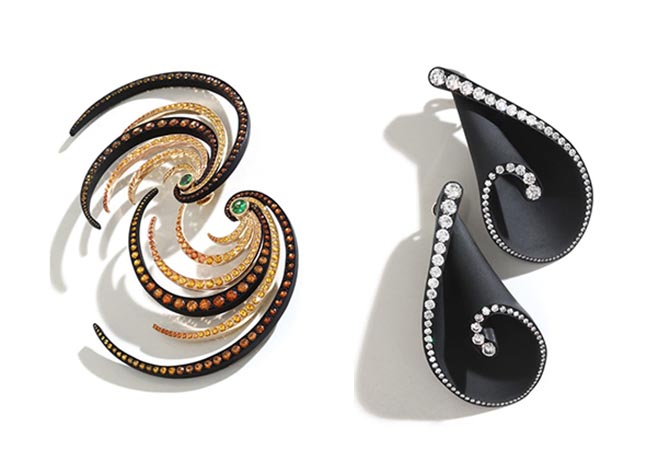 Emmanuel Tarpin is another millennial with an old soul. The Frenchman began his career in jewelry at the very highest level, in the workshops of Van Cleef & Arpels. In 2017 when he was just 25, he launched a capsule collection. The extraordinary sculptural aluminum and gold earrings are inspired by nature, leaves, flowers and the swirls found in the art of Andy Goldsworthy. Each piece is punctuated in a painterly way with gems. When Emmanuel began to show his jewels to key industry people and collectors word about the work spread rapidly. 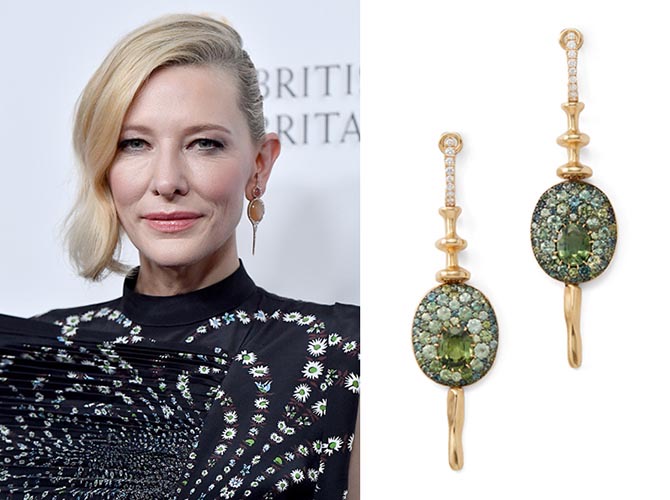 I happened to be in the right place (Los Angeles) at the right time (June 2016) when Vram launched his first gold jewelry collection and I scored the exclusive story. Since that moment, it has been amazing to watch the world embrace the artistic jewels inspired by the designer’s love of sculpture. Vram won the prestigious 2018 Best in Debuting Award at the Couture jewelry show in Las Vegas. On the red carpet, Cate Blanchett and Dua Lipa are just a couple of the stylish stars who wore his collection in 2018. It was an amazing year for Vram who I sense has only just begun.

In 2016, I wrote a story about the super talented designer Hanut Singh titled “The Best Jewelry Designer You’ve Never Heard Of.” His sensational work, that is a blend of dazzling deco-inspired elements and Indian design motifs, was virtually impossible to find at the time. Hanut chose to keep his business very small and only sold during trunk shows when he visited New York twice a year or at a by-appointment only boutique in Los Angeles. Well, now that his work is available at Fred Leighton in New York and upon occasion in Moda Operandi trunk shows online, treasure hunters have found it. Hanut racked up a number of  celebrity credits in 2018 that included everyone from Oprah, Meryl Streep and Zadie Smith to Emma Roberts, Eva Chen and Lauren Santo Domingo. I know this success is only going to continue to mushroom in 2019. 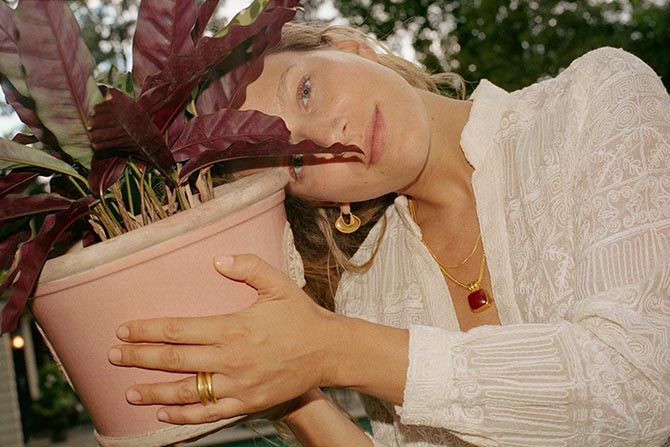 Just one look at the Prounis collection and it was clear the designer Jean Prounis had it. I first spotted the jewels on the great Instagram of Will Kahn @willsnotebook. Once I finally had the chance to meet Jean in person and hear her story it was instantly clear she was the real deal. She knows how to make jewelry on the bench and execute ancient goldsmithing techniques. It’s a skill that shines through in the jewelry that pays homage to her Greek heritage as well as the elegant nightlife of New York in the 1940s when her great grandfather Otto Prounis had a club at the Waldorf Astoria. It was the hot spot where Edith Piaf debuted in America. In other words, style and art are in her genes. 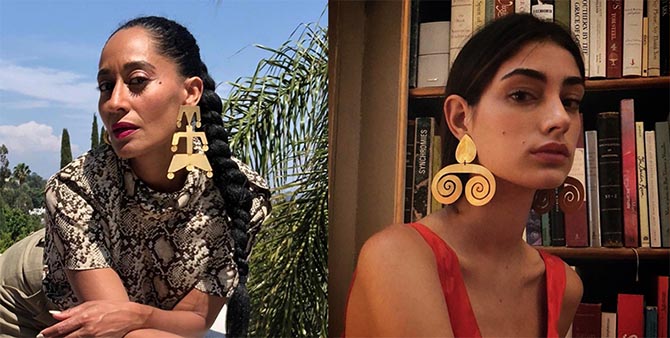 Paula Mendoza is a woman on a mission. From the moment she established her fashion jewelry label in 2007, she knew she was going to pay homage to her native Colombia. The shapes in her eye-catching gold-plated pieces are inspired by ancient forms and made by modern craftsmen in the nation. After years of carefully refining the collection, in 2018 it really took off and seemed to be everywhere on celebrities and influencers. Well, I was far from the only one who noticed. Paula began a collab collection and became the creative director with the 100-year-old Bogatá based jeweler Canon in 2018.

2018 Year in Review of Platinum Jewelry