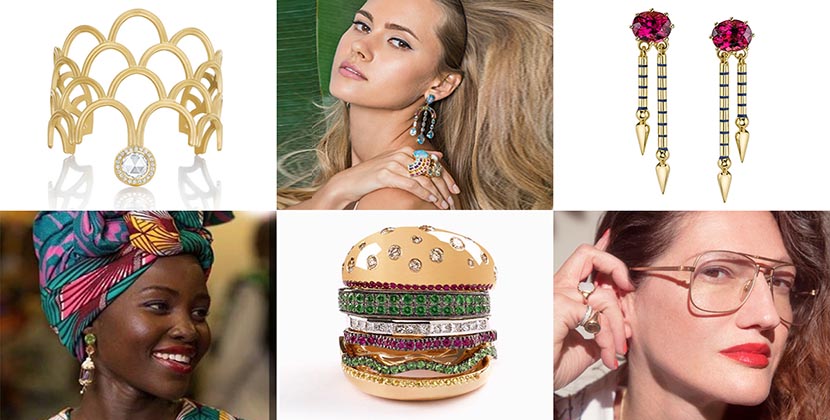 When it comes to jewelry designers, the future is most definitely female. Talents who made my short list of ones to watch are all women. Each of these designers began to shine in 2017. I am certain there will be a lot more sparkle from them in the year to come. What they all have in common, beyond gender, is individuality in their work. Where so many blend-in, these women stand out with their unique voices. Get to know them now.

While big jewelry brands try to figure out millennials shopping habits, Nadine Ghosn knows what they want intuitively. The twenty-something Lebanese-Brazilian designer who was born in the United States and lives in London is glamorous, cool and whip smart. After studying art and economics at Stanford University, she worked for BCG’s Luxury Practice Group in New York followed by a 2-year management track program at Hermès where she fell in love with jewelry and decided to launch her own collection. Nadine took the traditional courses at the Gemological Institute of America and then began making totally unconventional jewels in 2015. Her ingenious signature piece, a Hamburger Ring, is actually a stack of rings representing the meat patty, lettuce, onion, tomato and bun that can be worn together or separately. She also has an array of sushi rings and charms. While the gem-set food jewels can be pricey, there are gold symbol studs including a signal 📶 and no 🚫 that are sold individually for $155. Nadine’s lighthearted approach extends to her marketing. In New York City’s Greenwich Village and Soho neighborhoods stenciled street art promotes her work and then there is her one-of-a-kind brand video. All of it adds up to a unique collection that has garnered fans beyond the designer’s own generation. Beyoncé has been spotted in Nadine’s Shut Up Earring. Karl Lagerfeld wears the Can You Hear Me Necklace that looks like earbud headphones. 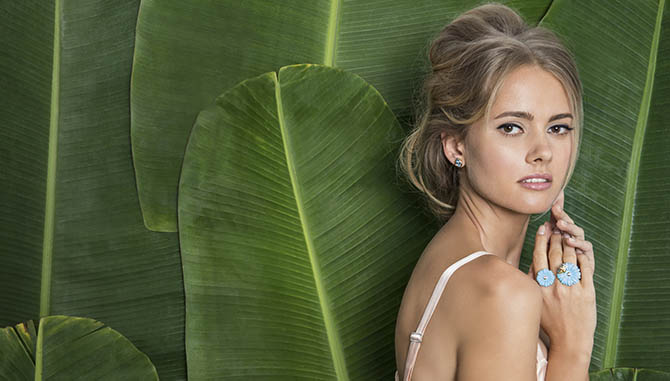 Whimsical was one of my long-time co-author Penny Proddow’s favorite words. She liked jewelry with a sense a humor and I know she would have loved Brent Neale’s collection. I bring her name into this review because the American designer credits Penny with encouraging her to follow her passion and pursue an associate’s degree in jewelry design from the Fashion Institute of Technology after she had graduated from Johns Hopkins University. When she finished her studies at FIT, Brent went on to work for designer Kara Ross for eight years, eventually becoming the jewelry director. In 2017, she launched her own label. The first collection titled After the Rain was manufactured in New York City and inspired by nature, the bright colors of artists Ellsworth Kelly and David Hockney and the vibrant fashions of the 60s and 70s. The motifs include rainbows, bees and unicorns in necklaces, bracelets, earrings and rings. The prices range from the low-four figures to a few hundred dollars. Photographer Claiborne Swanson Frank captured the mood of the collection to perfection for Brent’s lookbook. As the designer launches her second collection in some major retail outlets in 2018, she tells me the theme will have a little bit of a darker fairy-tale vibe. Sight unseen, I know Penny would have loved it too. She had a flair for the dramatic just like Brent. 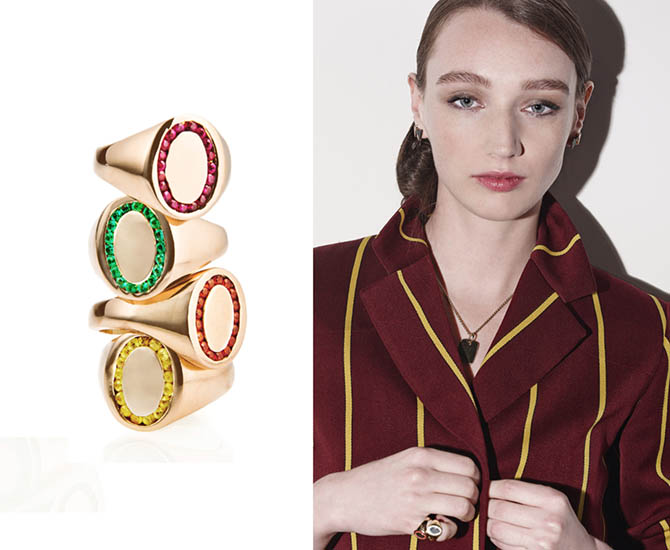 Jessica Biales signet rings in a still life and on a model. Photo courtesy and Scott Harris Brasher

Doing one thing and doing it very well takes imagination and discipline. Signet rings with a twenty-first century twist form the core of Jessica Biales’ delightful collection. She riffs on the silhouette in any number ways. There are cheerful Candy Signet Rings set with bright gems. Jessica has also played off the French Breton stripe shirt beloved by Brigitte Bardot with the enamel and gold rings in her Classic Stripe Signet group. Last fall she launched the custom colored Collegiate collection offering clients the opportunity to put their school colors on a ring and give back to a worthy cause. A portion of the proceeds were donated to Girls Inc. While Jessica’s jewels are not really for the red carpet, they have appeared in lots of stylish places lately. Designer Jeanna Lyons wore her Jessica Biales Emerald Candy Signet ring in a photo for Glossier. Her oval signet ring was worn by a model in the colorful new ads for the Gap. And Thandie Newton has been spotted sporting an oval stripe signet ring. 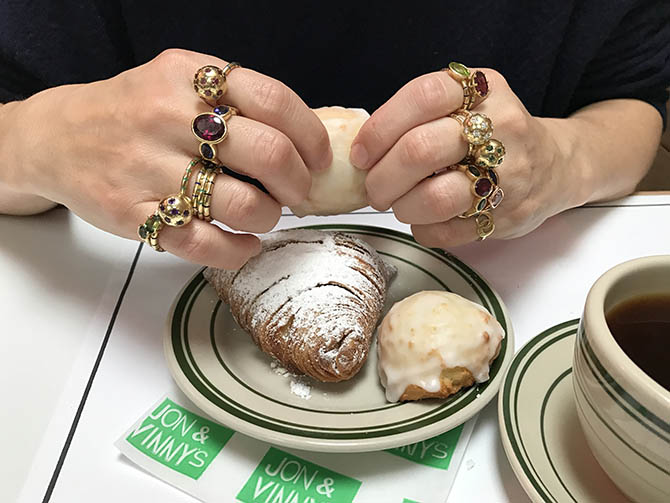 SARAH HENDLER – Fabulous Fine Jewelry That Looks Forward and Back

Vintage jewelry inspires Sarah Hendler, but honestly you wouldn’t know it at first glance of her collection. The pieces that move her have a type of edge antique looks are not exactly known for. I was lucky enough to meet and profile this rising jewelry star just a few months after the launch of her first collection in 2016. That’s right, she is one of those rare talents who begins almost perfectly. Oh, and I wasn’t the first to notice. Madonna and Ruth Negga wore Sarah’s signature Shirley Spear Earrings within months of her launch. Over the last year, Sarah has beautifully evolved the collection and proven she is truly one to follow in the future. 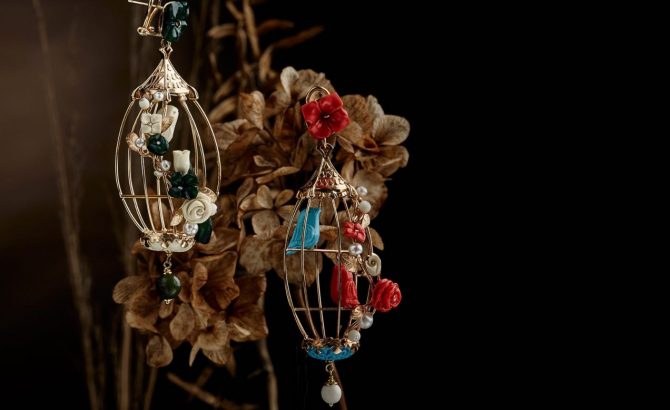 OF RARE ORIGIN – A Flock of Fine Feathered Jewels

It’s an all in the family approach to jewelry at Of Rare Origin. Leslie Tcheyan and her daughters Octavia Giovannini-Torelli and Thea Giovannini-Torelli work together making their delightful semi-fine jewelry collection that launched in March of 2016. Perhaps not surprisingly, a bit of family lore inspired all the birds in the designs. During summers in Montauk, Leslie’s mother who used to take the remains of breakfast to feed the birds would say, “When I die and you see the birds you will think of me.” The birds in the Of Rare Origin designs are various semiprecious gems carved by hand in Italy and set in 18K gold vermeil and silver jewels. Pendant earrings form the core of the collection, but there are a few necklaces as well. The flock of earrings has already flown on any number of famous lobes including Lupita Nyong’o, Lily Aldridge and Karolina Kurkova. 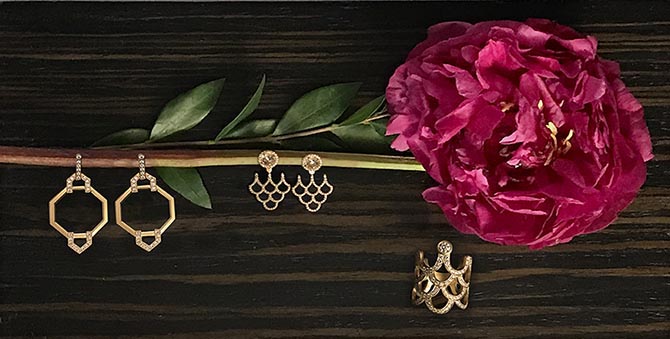 Changing careers mid-stream can be scary, but smart women will tell you it can also be a path to happiness. Just ask Doryn Wallach. In the midst of her work in interior design, she decided she wanted to pursue her lifelong passion for jewelry. Doryn’s gold and diamond collection is an irresistible blend of art deco décor elements rendered in contemporary silhouettes. The pendant necklaces, statement rings, earring jackets and mini-studs in the collection are everyday treasures. In a hat tip to her favorite period of design, Doryn also brilliantly repurposes art deco brooches that aren’t exactly easy to wear into necklaces that are. The super cool style is just the kind of thing you’d imagine Carrie Bradshaw tossing on in Sex and the City or say Sarah Jessica Parker posing for the Financial Times.

6 of the Hottest Jewelry Designers From Brazil

Best of 2017: The Hottest Jewelry Trends